“This is not a financial crisis,” said the president barely a week ago, during an Oval Office speech addressing the coronavirus outbreak. Like hell it’s not.

Last night, for the third time this week, the Federal Reserve launched a new “credit facility” to “backstop” the financial system. This one aims to shore up what’s supposed to be one of the safest assets you can hold in a portfolio — money market funds.

If this sounds familiar, yes, we’ve been here before.

Mainstream history notwithstanding, it wasn’t the collapse of Lehman Bros. that marked the most harrowing moment during the Panic of 2008. It was the near-meltdown in money market funds.

Specifically, it was the moment when the Reserve Primary Fund “broke the buck” — its share price falling below the money-market custom of $1.00. That’s because the fund’s assets included a large number of securities issued by Lehman.

Fear ripped through global markets about “Who’s next?” Short term, the Fed swooped in with paper clips and rubber bands to hold everything together. Longer term, Reserve Primary investors managed to salvage 99.1 cents on the dollar… while the Securities and Exchange Commission wrote new rules governing money market funds.

We were warning about the unintended consequences of these new rules as long ago as 2012.

But that wasn’t all. As the rules took effect in 2016, our Jim Rickards issued this warning here in The 5: "Another change that did not receive as much notice is that money market funds are now allowed to ‘suspend' redemptions… Not only can they pay back less than you invested, they don't have to pay at all — until they decide to. They can keep your money and get back to you later when conditions ‘normalize.' Whenever that is."

Along the way, we offered specific guidance about what to do. Hopefully, still, it’s not too late to act.

A select class of money market funds still has that fixed $1.00 net asset value — those that invest in U.S. Treasury debt and/or debt issued by government-controlled entities like Fannie Mae or Freddie Mac.

Really, you should also avoid money market funds that hold Fannie Mae or Freddie Mac paper — remember the trouble Fannie and Freddie got into in 2008? Usually the giveaway is that they have the term "U.S. Government" in the name.

You want a money market fund that holds nothing but U.S. Treasury bills. It might require a bit of homework, though not much; if they have "Treasury Only" in the name, that's a good sign. But look at the fund's top holdings at Morningstar or a similar website just to be sure. If there's anything other than Treasury notes, bills or bonds, move on.

If you don't need the check-writing privileges that come with a money market fund, you can opt for a Treasury-only ETF like the iShares Short Treasury Bond (SHV).

Jim Rickards' bottom line: "Short-term Treasury bills are a safer alternative. The Treasury still gives you your money back."

To the markets — which today at least are being led higher by the MAGA stocks.

Microsoft, Amazon and Google are all up sharply… and Apple less so. Thus the tech-heavy Nasdaq is up nearly 3%… while the Dow and the S&P 500 are up less than 1%. Volatility is still insane, with the VIX at 75.

Crude has rallied a staggering 23% to $25.01 — which until yesterday would have been a four-year low. Go figure.

Hmmm… We don’t watch American cable news channels — it’s one way we stay sane — but we monitor plenty of foreign ones, and we see Al-Jazeera’s New York correspondent evidently covering the markets from home today, after being on the trading floor earlier this week… 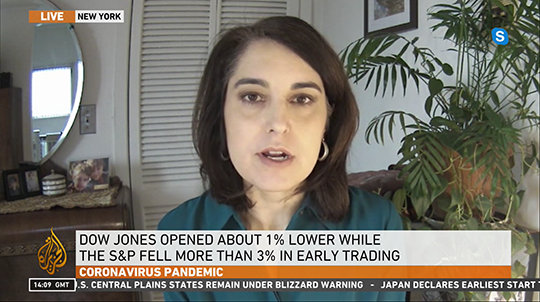 Actually, we’re seeing a lot of this, across the globe. It’s passing strange; unless these reporters are working their sources via phone, text and so on… they’re only relaying information anyone can find online, right?

First-time unemployment claims took a huge jump this week — way more than the so-called experts were counting on.

It’s been years since we bothered taking note of this number, other than for temporary disruptions like Hurricane Harvey in 2017.

The number rings in at 281,000. On the one hand, that’s typical for a healthy economic expansion. On the other hand, it’s up huge from last week… it’s way higher than the “expert consensus” of economists was expecting… and it’s almost sure to keep rising.

One other number of note — the “Philly Fed” survey of mid-Atlantic manufacturing for March. Like the Empire State survey in New York state earlier this week, it’s moved deep into “contraction” territory at minus 12.7.

There’s a way bigger story beneath the surface of the furor about the president’s references to the “Chinese virus.”

Forget the media sensation over whether it’s “racist” and focus on this timeless truth instead: When any society finds itself under stress, its leaders become tempted to point fingers at a foreign villain. And they usually yield to that temptation.

Since 2018, we’ve been saying the trade war between Washington and Beijing will last well beyond Donald Trump’s presidency — maybe 30 years. Since last summer, we’ve been saying the conflict is morphing into a new cold war. In January, on the day the “phase one” trade deal was signed, we spotlighted the “reds under the bed” suspicion of anything Chinese seeping through the federal government and society at large.

We agree with the assessment of political reporter Michael Tracey… 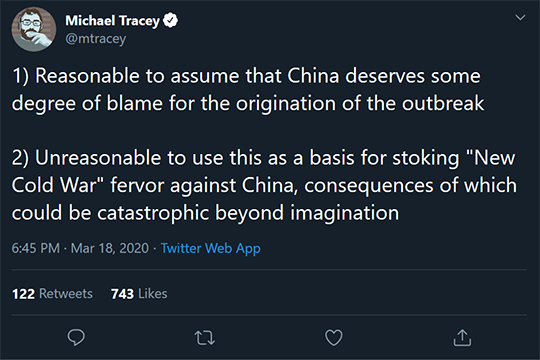 Unfortunately, the train left the station long before the outbreak.

Now we revisit a reader’s remark yesterday about how under the present crisis, “Congress will want to limit our right to assemble and to move freely from place to place.”

As the media critic Adam Johnson observed yesterday, “One cannot protest in a lockdown. Demonstrations, by definition, involve more than 250 people.”

In Brazil, where many lockdowns are in place, the only way opponents of President Jair Bolsonaro can lawfully seek redress of their grievances is… 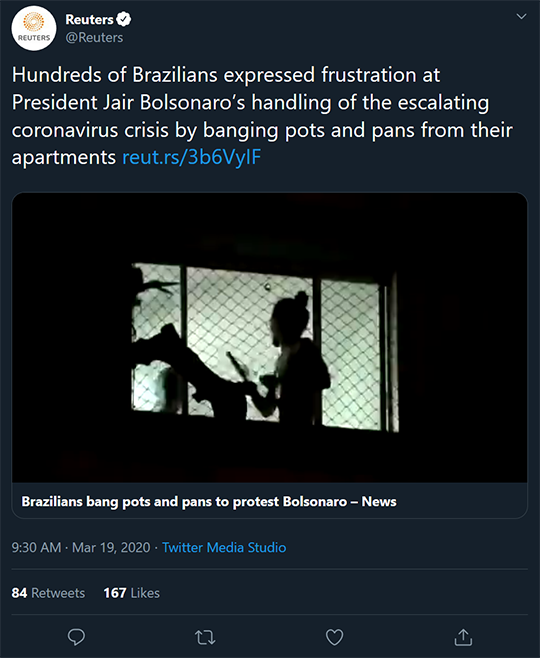 Most of Bolsonaro’s inner circle has tested positive, by the way.

Meanwhile… in the smallish Midwestern county where your editor lives, there was a sizeable turnout of concerned citizens last week at a county board meeting. The topic at hand was the adoption of a “Second Amendment sanctuary” resolution of the sort passed in hundreds of counties and four U.S states. 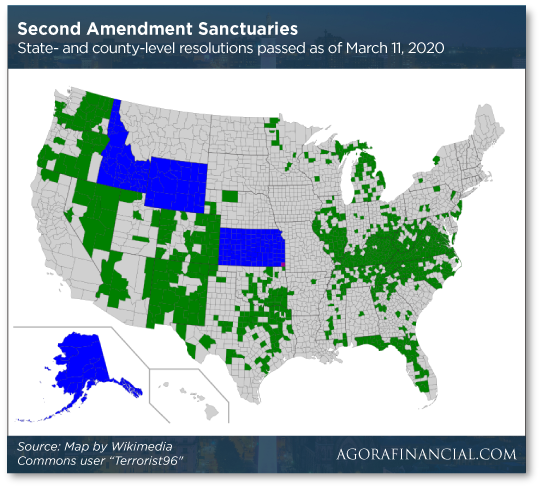 But that was before the clampdown on gatherings of more than 25, er, make that 10 people — which is either “suggested” or mandatory, depending on where you live. Coronavirus has killed the momentum of the Second Amendment sanctuary movement, at least for now.

Oh, and speaking of curtailed liberties… the algorithms of the major tech companies are joining in the fun.

The veteran Washington journalist Sam Smith retired to Maine a decade or so ago. He runs a Facebook page for his community and posted the following on Tuesday.

Facebook removed from our page a half dozen posts passing on reports about matters of concern to our readers such as the closing of L.L.Bean. Other items that were censored dealt with the effect of the coronavirus on Portland and elsewhere.

In a blog post, Google said that to reduce the need for people to come into offices, YouTube and other business divisions are temporarily relying more on artificial intelligence and automated tools to find problematic content. Such software is not always as accurate as humans, which leads to errors, it added, however. And “turnaround times for appeals against these decisions may be slower,” it said.

What do you want to bet the “old normal” never comes back?

To the mailbag: “Dave, I've heard the margin call comment with attendant liquidation as the driver behind gold dropping… but how does that square with a notice rec'd yesterday from my precious metal dealer that they are out of product and tomorrow will stop all shipments?

”It's understandable that margin call liquidations exceed retail purchases, but seems like there ought to be a counterbalancing effect if other retail dealers are in the same inventory position.”

The 5: Well, in the first place, you might be interested to know the algorithms are suppressing this information on social media. 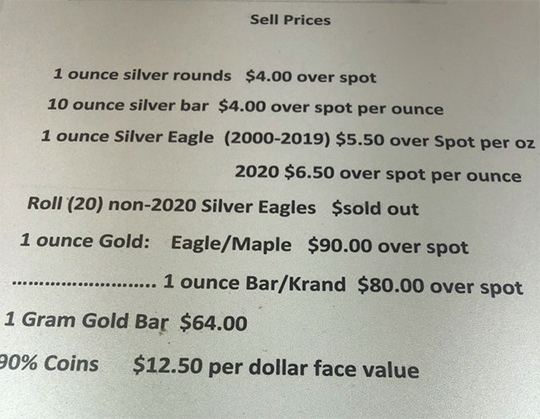 Sorry if we triggered you there. Heh…

Now to address the reader’s inquiry directly: The paper market for precious metals has nothing to do with the physical market.

For every physical ounce of gold that exists, there are 100 paper “ounces” trading in the form of futures on the Comex in New York and elsewhere. (The ratio varies; for a while in 2016, it was as high as 500-1.)

Jim Rickards has been hammering away at this theme on his Twitter feed this week. 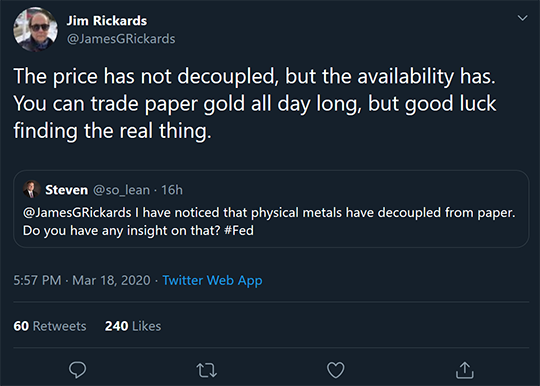 At least from the vantage point of here and now, there will probably be a time soon when the physical and paper markets come back into balance.

But there will also come a time that they separate for good. That’s when you’ll want to be certain you’ve got your precious metals. The real thing. And not stored at a bank — where there’s no guarantee you can get it when you’ll want it most.

P.S. Under the circumstances, we’ll follow up on our shameless plug yesterday for Hard Assets Alliance: If you’re a newbie to precious metals — or if you’ve tried online dealers in the past and you’ve been put off by the complexity — there’s no easier way to buy and hold real physical metal. And the costs are among the industry’s lowest (although, like everywhere, they’re elevated right now — see above).

If you prefer, with a single click you can buy and store your metal in your choice of seven audited vaults worldwide. You can follow this link to set up an account.

Note that last year, Agora Financial purchased a stake in the Hard Assets Alliance. So yes, we’ll get a cut of the fees (which, again, are among the industry’s lowest). We wouldn’t have made that investment, however, if we weren’t already impressed by what Hard Assets Alliance does for everyday folks who want exposure to precious metals. One more time, here’s the link.