“The odds of global recession and specifically a U.S. recession have gone from 20% (or lower) to 50% (or higher).”

That’s the assessment of our macro maven Jim Rickards.

“Markets are trying to reprice for this, but since the outcome is uncertain, markets don’t yet know how low to go.”

Indeed. With a pandemic marauding across the planet, there are just too many unknown quantities right now. Even the prospect of $1,000 in TrumpBux hitting consumers’ mailboxes next month isn’t enough to stanch the bleeding this morning.

➢By the way: Since last year, Jim’s statistical models have said the odds for the president’s reelection are basically the inverse of the odds for a 2020 recession. Which means in very short order we’ve gone from an 80% probability of a second Trump term… to 50%.

More about the stock market action shortly. But it’s mostly gold we have on our minds this morning.

To set the stage, we present a chart of gold’s action going back to mid-December… 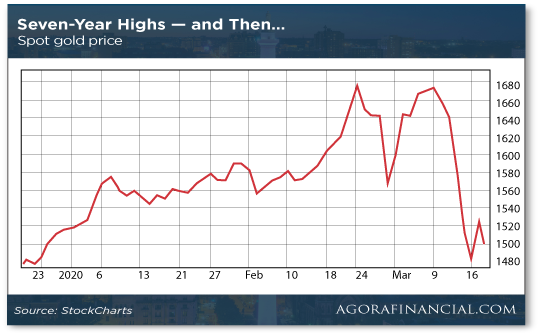 “But let’s put that in perspective. Gold hit the $1,530 per ounce level in January 2020 for the first time since April 2013, almost seven years ago. We’re back where we were in January, but we’re higher than we’ve been for seven years. That’s a win.”

Here’s the longer term: “Gold is in its third great bull market in history,” says Jim.

Jim nailed the start of it, almost to the day, in the Dec. 11, 2015, edition of The 5. His reasoning was rock-solid, although even he’d concede his precision was a statistical outlier. Regardless, the bottom came six days later at $1,051.

“Since then,” he says now, “gold has risen 46% even after the recent correction. More importantly, this bull market is still in the early stages and has far to run.

“To reach that conclusion, one has only to look at the two prior bull markets,” he goes on.

No guarantees on either the price or the date, of course. We’re dealing with a small sample size, after all. But that’s the broad trajectory — a sevenfold increase over the next six years, give or take.

So the drop this month is a blip in the big picture. Still, what gives?

We’ve said it several times in recent weeks, but it bears going a little more in depth today.

“When viewed against the background of a global pandemic from coronavirus, some of the worst single-day drops in stock prices in history, a spreading liquidity crisis and a potential worldwide recession,” says Jim, “a decline in the price of gold is not only not unusual, but entirely to be expected.

“The reason is that traders are losing fortunes in stocks, corporate bonds and industrial commodities. Many of those losses arise in leveraged accounts such as hedge funds and high-net-worth individuals. If a market declines 20% (as happened with stocks in the past month) an account leveraged 3-to-1 will lose 60% on its trade. That means a broker will make huge margin calls on the account party to cover those losses.

“The losing party will try to sell stocks or bonds to stop the bleeding, but those markets quickly become illiquid or go ‘no bid.’ In distress, if you can’t sell what you want, you sell what you can. That means gold.

“Gold markets maintain liquidity even when other markets dry up,” Jim explains. So parties sell gold to raise cash to meet margin calls on stock losses. This happened in 2008 and it’s happening now. That explains at least some of the drawdown in gold prices.

“If weak hands are selling, won’t the strong hands jump in to buy? The answer is yes, but not right away. The strong hands see what’s going on and are prepared to buy, but not until the last distressed party has closed out his last gold futures contract.

“Then the strong hands pounce like a lynx looking for breakfast. That’s when the price of gold soars and the bull market in gold gets back on track.”

What does that mean for you? “It means the time to buy gold is now, while the weak hands are liquidating but before the strong hands pounce,” says Jim.

“Trying to time the bottom is a fool’s errand. [Again, Jim got lucky in late 2015!] Without knowing for sure, it appears that gold may be near a bottom right now.”

Reminder: Jim believes your portfolio should have a 10% gold allocation — if for no other reason than to cushion any shocks in your other assets.

But how do you pull it off? If you’re new to precious metals… or if you’re frustrated using other dealers… we’d like to draw your attention to the Hard Assets Alliance.

Hard Assets Alliance allows you to buy and take delivery with exceptionally low costs. Or with a single click, you can buy and store your metal in your choice of seven audited vaults worldwide. You can even store your metals in an IRA. And the interface on the website is brain-dead simple to navigate.

How simple? Check out the account setup page right here. If you’re not 100% ready to pull the trigger today, there’s no obligation to fund your account right away. But by setting up an account now, you can make that move whenever you’re most comfortable.

Full disclosure: Agora Financial was an original member of the Hard Assets Alliance a few years back and more recently purchased a stake in the company itself. But that’s only a reflection of how impressed we are by what it can do for everyday folks who want exposure to precious metals.

To the stock market now, and those aforementioned unknown quantities.

At last check, the major indexes have coughed up all of yesterday’s gains. The S&P 500 has fallen below 2,400. That’s about a 6% drop — which, at least, falls short of the 7% threshold that halts trading for 15 minutes.

Reinforcing the sense of “orderly decline” is the fact the VIX is nearly unchanged from yesterday’s levels. Granted, at 77, it’s still extremely elevated. Little wonder, considering nearly three years of stock market gains have been wiped out in a month.

But the stock market’s losses today pale in comparison with crude oil’s. At last check, a barrel of West Texas Intermediate is down another 15% to $22.84. That’s way below the early 2016 lows around $26. We’re now back to levels of April 2003 — a month after the U.S. invasion of Iraq, when conventional wisdom figured it would be easy-peasy to get Iraqi production up and running again. (In reality, oil more than doubled past $50 over the following two years.)

Gold is an even better bargain now than it was at yesterday’s close, $1,492.

Even U.S. Treasuries aren’t a place to hide today. Prices are tumbling and yields are surging — the yield on a 10-year note back above 1% for the first time in two weeks.

The case of the airlines is especially infuriating. The industry’s trade group is seeking $50 billion for the passenger carriers. Meanwhile, figures from Bloomberg reveal the airlines spent $45 billion on share buybacks since 2010.

If The Washington Post is to be believed — a stretch these days, but play along with us here — “a representative of Wynn Resorts raised the possibility of the industry seeking cash payments” during a conference call among members of the American Gaming Association.

Adelson’s Las Vegas Sands (LVS) tumbled to nearly $2 a share during the post-2008 bust and ran all the way up to $74 two months ago. It’s been cut nearly in half since then. But aside from hampering Adelson’s ability to buy half the Republican members of Congress the way he has the last couple of election cycles, what’s the harm?

What’s past is prologue. As the economist Tom Woods wrote in his 2009 book Meltdown, about the Panic of 2008: “The bailout of the Big Three automakers sends the message that although mismanagement at an average-size firm will be punished with losses, gross mismanagement on a gigantic scale will be rewarded with credit and funds purloined from innocent third parties.”

With bars and restaurants now shut down in Oregon, a strip joint in Portland has figured out how to remain in business for the time being.

Writes Andi Prewitt in Willamette Week: “Lucky Devil Lounge is bringing its dancers to your door with a new food delivery service it’s calling — wait for it — ‘Boober Eats.’”

The full menu — well, not the alcoholic drinks — is available. “I originally did it at first as a joke,” says club owner Shon Boulden, “and it got 150 shares on Facebook — like nothing we've ever had before. So I was like, 'Well, s***, why don't we just try to do this?'"

The dancers, he says, will “wear pasties and booty shorts, drop off the food, dance for a second and then we'll move along. We'll still stay a reasonable distance back. They have Lysol as well.”

Not only are the dancers still employed, but also the guards — who are driving and providing security.

“I too sense the 9/11 feel of our new crisis — one that was inevitable and seeming to need only a trigger,” a reader writes after we discussed the 9/11 vibe of the current moment.

“My tinfoil hat says that crisis is a great opportunity to strip yet more of our basic rights, as Congress will want to limit our right to assemble and to move freely from place to place. New agencies will be created, offering more opportunities for patronage and taxpayer bailouts, and the bureaucracy will offer fresh opportunities for the cybercriminals to find back doors into our data.

“Retailers are already jumping on the opportunity to close stores but still offer to deliver or drive-thru. How does that prevent human contact? Starbucks' long-standing ‘war on the walk-ins’ began immediately and now everyone wants to follow suit. Of course, they will all say it's to protect against liability, because there never was a corporate attorney willing to go to court. ‘Don't do anything, it could get you sued’ is the long-standing mantra. And I won't deny the germ of truth in it. All day long I hear lawyers soliciting opportunities to sue everyone and anyone for anything.

“And of course, like every market disaster, some will walk away flush and return to pick up bargains after the market bottoms out. As always, The 5 sees through the rain of BS, no matter how intense.”

The 5: We try, anyway. Harder now than ever amid the “warp-speed noise, misinformation and disinformation” we lamented last month. But we’ll keep at it…