Step away from the ledge… and somewhere between “stay the course” and “reallocate.” 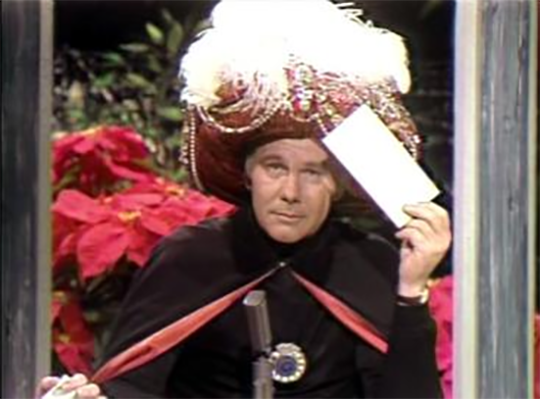 “What should investors do: Jump out the window, stay the course or reallocate?”

All pertinent questions as we — apprehensively — start our Tuesday; also, all questions discussed at podcast Financial Sense Newshour.

“If you own a blue chip stock — a blue chip aristocrat — I don’t care if it’s McDonald’s, if it’s Coca-Cola or Procter & Gamble — whatever the stock is that has a history of increasing its dividend every single year for over 25 years, I would hold onto them.

“Because the one thing that’s not going to change in this market downturn, you’re still going to get your dividend, and number two, more than likely, you’re going to see your dividend increase.”

“If investors would treat high-quality companies they own like rental real estate, they’d be a lot better off.” Interesting…

Here’s how: “It’s a great thing when you have cash flow from income-producing stocks that go up every year… [These stocks] give you a pay increase that helps you deal with the cost of living.”

Not to mention “dividend aristocrat companies outperform the market over long periods of time… You’re still going to get your dividend, and there’s a greater probability that dividend is going to go up. Last year, dividends were up over 8%, and we can expect an 8% increase this year.”

So — deep, cleansing breath — “stay the course, have a plan and stick to it.”

Advice we think our income-investing pro would heartily approve…

As the market whipsaws, Zach Scheidt says: “The most important thing to keep in mind is that our portfolio is designed to survive times like these.”

For his readers at Lifetime Income Report, Zach emphasizes: “[Our portfolio’s] chock-full of strong companies that regularly bring in huge amounts of money.

“Yes, the coronavirus will bite into their revenues. But the hit won’t last forever,” he says. “As the virus inevitably runs its course, people will return to their old spending habits.

“And the companies we’ve chosen can afford to wait for that to happen. They’re sitting on tons of cash already — enough to keep the business going and pay their dividends.

“[Dividend] payouts will continue to help offset… losses,” says Zach, “which is why our portfolio is in much better shape than one that isn’t focused on high-yield companies.

“It’s also why our stocks are more likely to recover faster than others,” he continues.

Zach’s conviction: “For the most part, we’ll ride out the dips and collect our dividends — possibly using the money to buy more shares at discounted prices as things recover.

“That way, when the rebound comes, we’ll be in even better shape than before.”

[Ed. note: There’s no better time than now to add income-generating aristocrats to your portfolio.

If you want the benefit of extra income… to know the secret income strategies of the rich… or to amplify your retirement portfolio… subscribe to Zach Scheidt’s best-selling newsletter.

For access to all of Zach’s dividend-paying recommendations at Lifetime Income Report, check this out.]

Think Trump’s 11 a.m. presser was meant to goose the markets? We did… And it seems to be working for the time being.

[On more than one occasion, The 5’s mentioned the Fed’s annual survey of Americans’ financial health that found four of 10 adults wouldn’t be able to scrounge up $400 for an emergency. So yeah, “cash now.”]

To that end, the government is kicking around the idea of sending checks to Americans in the next two weeks via an $850 billion stimulus package.

For the major economic number of the day, we turn our attention to February retail sales… which fell off by the widest margin in a year, telling us a key driver of the U.S. economy — consumer spending — was already in the dumps before coronavirus panic really set in nationwide.

According to the Commerce Department, overall sales were down 0.5% from January’s 0.6% gain; that’s at odds with what analysts anticipated for February — a 0.2% advance.

“What we are dealing with is something more like a 9/11 event,” says CIO Tad Rivelle at asset manager TCW Group Inc. “There is a general shutdown of economic activity in a lot of different places.” Quarantines around the globe will tend to have that effect… we’re just spitballing here.

As a result, according to Bloomberg: “Companies have been drawing down billions from credit lines and other bank loans that act as a backstop to markets for short-term funding. They’re shoring up cash as the coronavirus pandemic brings parts of the economy to a halt.”

Fed Chair Jay Powell said: “We’ve given broad general guidance to the banks. We’d like them to use their buffers to provide loans and accommodate.”

Powell continues: “They’re saying that’s what they’re going to do. We have nothing to announce on direct lending.” (More on that in a moment.)

“The problem is not interest rates. It’s liquidity,” says Jim Rickards. And that realization’s dawning on the Fed, he says, perhaps in a case of too little, too late.

“Even at low rates,” Jim Rickards says, “many companies simply cannot get money since they lack collateral or because their credit ratings are being downgraded due to lost business.

“Companies in air travel, energy, transportation, leisure and textiles are running out of cash as supply chains seize up. Smaller companies are close to going broke and will lay off employees in the meantime.

“As usual, the Fed is behind the curve,” Jim says. “Before long, the Fed and the markets will be run over by a global shortage of cash.”

Well, the Fed’s changing course on direct lending: “The Federal Reserve said Tuesday it is providing help to companies that are having a hard time getting the short-term funding they need to operate,” CNBC reports.

“The [Fed] announced a special credit facility to purchase corporate paper from issuers that have been having a difficult time finding buyers on the open market,” CNBC continues. “Corporate paper involves unsecured short-term lending…

“The one-day facility comes under the Fed’s emergency 13(3) powers of the Federal Reserve Act and will involve three-month paper for eligible companies. The cost will be the three-month overnight index swap rate plus 200 points.”

Oh, on the topic of liquidity, the Fed approved another $500 billion for funding overnight repo markets… This is becoming something of a daily occurrence, no?

“America doesn’t have enough hospital beds to fight the coronavirus,” says an article at Reason. “Protectionist health care regulations are one reason why.”

Following up on something Dave mentioned yesterday, state CON laws — short for “certificate of need” — might inhibit the response necessary for coronavirus containment. Thirty-five states are bound by “certificate of need” laws that supposedly curb hospital spending and — theoretically, at least — keep costs in check for consumers.

“But in practice,” Reason continues, “they mean hospitals must get a state agency’s permission before offering new services or installing a new medical technology. Depending on the state, everything from the number of hospital beds to the installation of a new MRI machine could be subject to CON review.” In fact, 28 states require permission from state regulators before hospitals can add even a single bed.

Contrast that with measures in Wuhan, China, where a hospital with 1,000 beds was up and running in two weeks. “[That] would be nearly impossible to duplicate [in the U.S.]” Reason says, “because regulations (including CON laws) routinely prioritize protectionism over health.”

But they’re not protecting patients…

More COVID-19-related feedback: “The numbers you used to show the higher death rates are questionable,” a reader says.

“There are many people that get infected but show little or no symptoms. So a lot of them do not get counted because they don’t feel sick enough to go get tested.

“Also, the CDC puts pneumonia and flu in the same category when it comes to sickness and death so do we really know who died of what? I agree that the numbers are probably higher than the typical flu, but not rates that are being touted by the government and MSM.”

Speaking of, we couldn’t leave you today without a little levity…

Have you gotten a flood of emails from businesses updating you on their coronavirus responses? Bet you have. We thought this tweet hit the nail on the head… 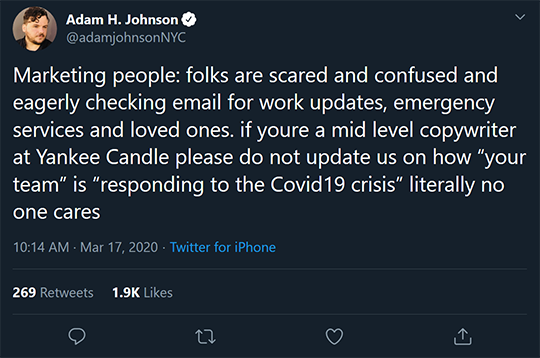 P.S. Back in late December, CBOE trade veteran Alan Knuckman launched a new research service and — in the roughly three months since — the returns his readers have locked in are staggering.

Alan’s even managed to keep the hot streak going…