At age 57, Treasury Secretary Steve Mnuchin just cemented his reputation for the rest of his life.

We just don’t know whether that reputation will be as a sage or a fool. Heh… 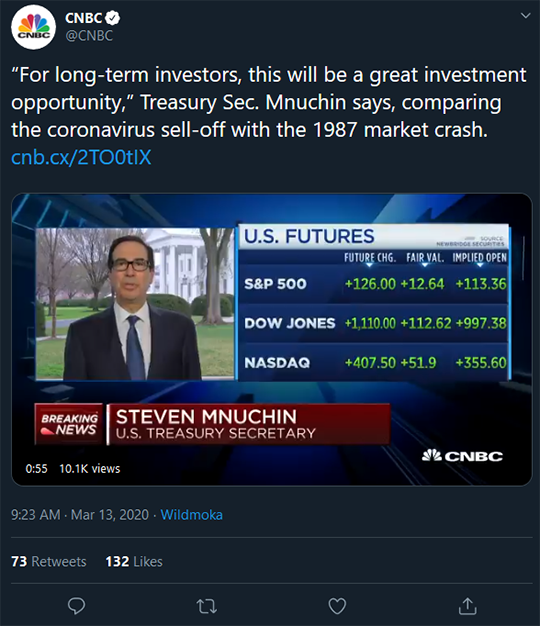 Look, either he’s going to be totally on target… or catastrophically wrong. No middle ground here.

As you’ve likely heard, the stock market had its worst day yesterday since “Black Monday” in 1987.

And for once, that’s not a distortion on the part of traditional financial media — which usually fixate on points and not percentages when they examine the major indexes. The Dow industrials tumbled 10% yesterday.

You want more extraordinary stats? In the 124-year history of the Dow… yesterday and the day before was only the seventh time the Dow registered back-to-back losses of more than 5%. It happened most recently during the Panic of 2008, according to figures from LPL Partners spotted by colleague Greg Guenthner.

Intriguingly, it did not happen in 1987.

Mnuchin is correct in one sense: 1987 was a hiccup that proved inconsequential in the midst of an epic bull market stretching from 1982–2000 — as we pointed out on the 30th anniversary of Black Monday.

But no way are we prepared to say history is going to rhyme this not when “subprime 2.0” is staring us in the face.

Going back to late 2018, we’ve been warning that the biggest threat looming over financial markets comes from the debt racked up by corporate America ever since the Panic of 2008.

About one-third of that debt is “junk” — with higher yields but also a higher risk of default. Another third is rated BBB — one notch above junk. Which means only one-third of corporate debt can truly be considered “investment grade.”

Investors who don’t mind taking a flyer on junk bonds can do so easily through an ETF with the ticker HYG. Works great as long as times are good and investors are confident companies can keep up their debt payments.

Alas, HYG just entered a bear market this week, along with stocks. “Subprime 2.0 has burst,” in the pithy assessment of our newest contributor, Graham Summers. 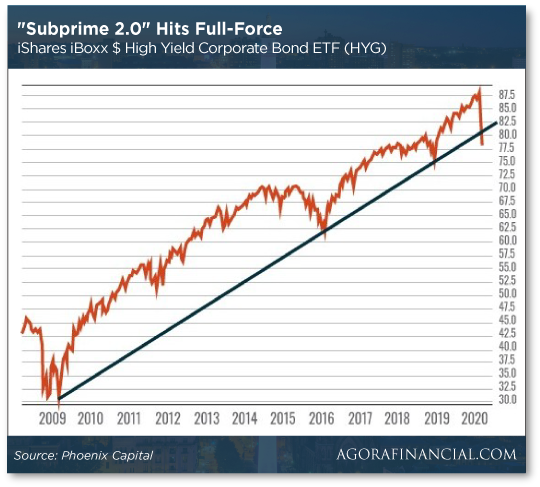 Why does he call it that? “As you’ll no doubt recall, the 2008 crisis happened when the subprime crisis spread to other, less risky mortgages that had traditionally been considered ‘safe.’”

Which means Graham is on alert for the junk bond scare to spill over into the other two-thirds of the corporate-debt market that’s not junk.

The spillover has not yet occurred… but Graham is on high alert.

Meanwhile, “Where does this leave stocks?” he asks. Any bounce in the stock market, he believes, is an opportunity “to unload long positions at better prices.”

Which presumably he’s starting to do today…

Stocks are rebounding as the week mercifully comes to a close.

From here, it looks like a relief rally. There’s no real reason stocks should be 3% higher today than they were yesterday.

As has been the case ever since the repo market seized up six months ago, we don’t know which firms are getting these loans or why their usual lenders (other Wall Street firms) refuse to lend to them. Comforting, huh?

Aw, gee, you mean fanboy doofuses won’t be standing up to ask Warren Buffett banal questions like, “What five things do you look for in a company?” when they could find the answer in any one of five dozen books about Buffett? What a shame…

Smart people we follow outside our immediate circle here at The 5 won’t rule out a sell-off all the way down to $1,350 — at which point they’ll be buying with both hands.

But if you don’t have your full allocation yet — again, our Jim Rickards recommends 10% of your portfolio — don’t wait for that drop to happen. The price could easily reverse from here and run away from you. Better to dollar-cost average your purchases every couple of weeks or so.

In the vein of “never letting a crisis go to waste,” we see the coronavirus outbreak has opened up a new front in the war on cash.

If you’re a newer reader, the war on cash is a recurring theme of ours. The powers that be are eager to pursue a cashless society for a host of reasons. Not only does physical cash allow you to carry out transactions without being tracked by the government… it’s also a means to preserve your purchasing power when interest rates go negative.

(That hasn’t happened here in the United States yet, but it’s probably coming soon; Germans and Japanese have been stashing cash in home safes for years now.)

Which brings us to the following dispatch from the London Telegraph: “Bank notes may be spreading the new coronavirus so people should try to use contactless payments instead, the World Health Organization has said.”

What’s more, “the Bank of England has acknowledged that bank notes ‘can carry bacteria or viruses’ and urged people to wash their hands regularly. It comes after both China and Korea last month began disinfecting and isolating used bank notes as part of their efforts to stop the spread of the virus.”

We’ll raise an uncomfortable question here that we’ve raised before: How is a cashless society supposed to work when the authorities shut down the internet and cellphone networks?

That’s not a hypothetical question in many countries — especially in India, where Prime Minister Narendra Modi resorts to routine internet shutdowns to quell dissent in fractious parts of the country… even as he’s prodded his nation away from cash and toward mobile-phone payments since 2016.

And the question is even more urgent now amid the coronavirus outbreak here in this country.

Under Section 706 of the Communications Act, the president can shut down or seize “any facility or station for wire communication” if he proclaims “that there exists a state or threat of war involving the United States.” As for wireless communications, the standard is looser — a mere “state of public peril” or a “disaster or other national emergency” can justify a shutdown. No notice to Congress required.

“The language here is undeniably broad. The power it describes is virtually unchecked,” said FCC Commissioner Jessica Rosenworcel in a recent speech. “If a sitting president wants to shut down the internet or selectively cut off a social media outlet or other service, all it takes is an opinion from his attorney general that Section 706 gives him the authority to do so.”

OK, Rosenworcel is a Democrat and the current president is a Republican. But she’s not wrong. The Founders would be appalled that Congress would hand the president, any president, such sweeping powers.

[Just in: The president is about to declare a national emergency. Granted, this is the sort of declaration that merely frees up federal aid to states and cities. But the power to shut down the internet and digital payments is there — all it takes is “a pen and a phone,” as the previous occupant of the office put it.]

If we really are sinking into a recession, it would be a first for the legal cannabis sector — and Ray Blanco says that actually could be a good thing.

Ray is our specialist in high-tech and biotech stocks… but along the way he’s become America’s No. 1 pot-stock expert. He turned us on to the sector here at The 5 nearly four years ago.

“The closest comparable industries to marijuana — health care, alcohol and tobacco — are all known for being recession-resistant,” he tells us.

“Folks don’t stop having health problems when the economy turns down — in fact, they often go out in search of lower-cost alternative treatments, like CBD.

“Likewise, while recessions may force people to go on fewer vacations, they generally keep smaller luxuries like alcohol, tobacco and recreational cannabis.

“Even though a recession would likely put financing pressure on the weaker, unprofitable names in the cannabis industry, the huge wave of selling that the whole industry has coped with over the last 18 months or so actually puts the stronger names in a position to rally as investors suddenly discover that cannabis isn’t all that different from its more established peers.”

No guarantees, of course. On the other hand, Ray says you need only $50 to dip a toe into the sector and potentially walk away with a nice windfall. See for yourself at this link.

Ah, and it seemed so promising when it debuted late last month: “The campaign,” said the trade publication Ad Age, “includes a film… depicting a variety of people reverently licking their fingers post-KFC in time with the piano notes of Chopin’s Nocturne op. 9 No. 2 — as if each lick coincides with the strike of a key.”

The Advertising Standards Authority — that’s the U.K. ad industry’s self-regulating body — got a batch of viewer complaints in recent days.

“We have been in touch with KFC, who had already taken the decision to withdraw the ad before we had informed them of the complaints,” says an ASA spokesman. “On that basis, we won’t be taking any further action on this occasion.”

To the mailbag, where your editor’s casual remark about Everclear and its potential germ-killing properties is still generating replies…

“Dave, last time I drank Everclear was at least 40 years ago, and what I got as a result more resembled alcohol poisoning.”

“Black Jack,” reads the subject line of another… and we’ll give this gentleman the last word this week.

“I don't know,” he writes, “but I think two parts Jack Daniels and one part crushed ice would take care of all issues.”

The 5: No argument here…

P.S. We said it yesterday, but it bears repeating: Keep a closer eye on your inbox than usual. The editors of our paid publications might issue buy or sell alerts that require quick action — quicker than you might be accustomed to. That’s just the way the markets are right now…