The Fake Crisis, and the Real One

“If you were an investor during 9/11 or worked in the business, then you feel the parallels between this moment and that one very acutely,” writes Josh Brown.

Once in a while, we check in on Brown’s blog. He’s the CEO at Ritholtz Wealth Management in New York and a regular CNBC presence. While he’s a mainstream financial figure, he also exercises a level of independent thought we can’t help but respect.

“Then, as now,” he wrote yesterday, “the life-and-death issues of the moment overrode concerns about market volatility, although the volatility became expected each morning when we opened our eyes and went to work.

“Then, as now, there were questions about the U.S. government’s response, the Federal Reserve’s role in shoring up the economy, what Congress would pass in terms of fiscal stimulus and, of course, the rumors, fears and theories about subsequent attacks.

“Every time a suspicious package was found in a train station or an airport, stocks would lurch lower, not unlike the way we’re currently trading around new outbreak reports. Anthrax in the mail then has been replaced by school closure announcements today.”

The analogy didn’t ring quite true with me. But then, I’m not on Wall Street. As I’ve pointed out a couple of times in recent days, Wall Street’s panic levels seem to have risen in tandem with the number of confirmed coronavirus cases in metro New York.

Before dinner, I mentioned Brown’s observations to my wife. She doesn’t have a background in finance, but she spontaneously said, “I was thinking now feels a lot like then, too.”

Then… in the space of an hour before bedtime… incoming flights from Europe were banned, the NBA suspended its season and Tom Hanks made it public that he and his wife had tested positive.

Building on Brown’s blogpost we’ll add that then as now, it’s hard to separate signal from noise.

If anything, it’s much harder. Heck, “blogs” weren’t even a thing then. Now they’re already passé in an era when we’re confronted by a blizzard of social media.

To help us out, we bring in one of the newest contributors to our team today…

“The world is facing two crises. The first — coronavirus — is manufactured. The second — a credit implosion — is very real,” says Graham Summers.

“The coronavirus panic was 100% made up and manufactured by the media,” he asserts.

Graham’s got a point when he reminds us about the H1N1 “swine flu” outbreak in 2009–10. The Centers for Disease Control and Prevention estimated 59 million Americans contracted the virus and 12,000 died.

How many of us even remember that now?

At last check this morning, confirmed U.S. coronavirus cases number 1,323. Yes, that’s likely because large numbers of people who are infected aren’t getting tested — and that’s a problem. But are matters truly as dire as they’re being portrayed? 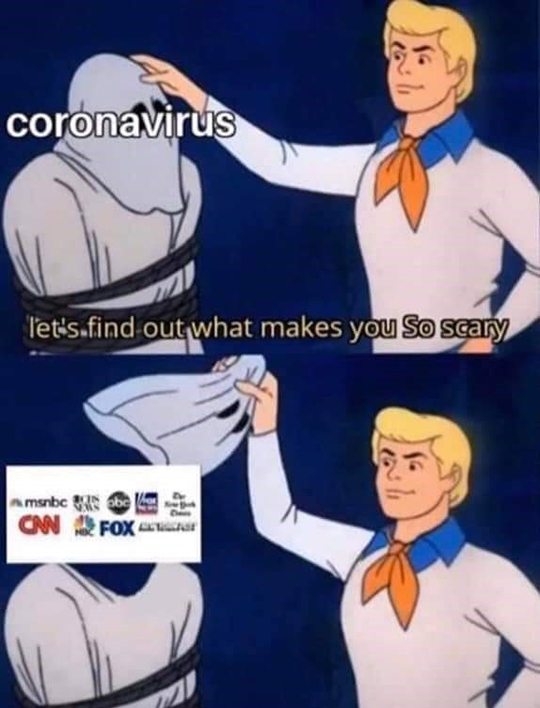 “No one shut down their economy over swine flu,” Graham goes on. “No one stockpiled toilet paper. No one talked about the end times.

“However, now that the elites are shutting down things, the economy will take a real hit. If large group meetings are considered a danger, then factories, companies, schools, conferences and the like will be closed. And that will hit the economy HARD.”

OK, now for the real crisis…

“This is not a financial crisis,” the president was keen to say during his Oval Office speech last night. Graham begs to differ.

“As you are no doubt aware,” he begins, “there is too much debt in the financial system. Global debt-to-GDP is north of 200%. Leverage is higher today than it was in 2007. And the world is absolutely saturated in debt on sovereign, state, municipal, corporate and personal levels.

“However, everything was running smoothly as long as nothing began to blow up in the debt markets or credit markets. And despite a few hiccups here and there, the debt markets have been relatively quiet for the last few years.

“Not anymore. Someone or something is blowing up in a horrific way behind the scenes,” says Graham.

In part, this goes back to the seize-up of the “repo” market six months ago. We won’t hash over the history again this morning. Suffice it to say that twice last week the Federal Reserve issued $100 billion in overnight loans to the big Wall Street firms. Earlier this week the figure was jacked up $150 billion. Now? $175 billion.

“You don’t get those kinds of demands for liquidity unless something is truly horrifically wrong,” says Graham. “Think: LEHMAN BROS.”

Graham directs your attention to this chart. The red line is the S&P 500. The black line is a proxy for the credit markets — both Treasuries and corporate bonds. 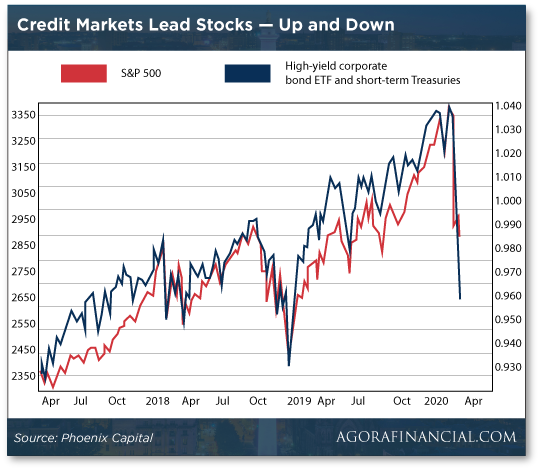 “As you can see,” he explains, “the credit market led stocks to the upside during the bull market. And it is now leading stocks to the downside. Credit is already telling us that the S&P 500 should be trading at 2,600 or even lower.”

Well, Graham wrote that yesterday. “Should be” is already coming to pass today. More about that shortly…

Just like generals who always “fight the last war,” the Federal Reserve will look to combat this crisis with the tools it used during the Panic of 2008 — which Graham says won’t work now.

And those policies aren’t doing anything to stop the bloodbath.”

What does he think could stop it? “A globally mandated intervention, in which the Fed and other central banks start buying corporate debt.”

That would require an act of Congress. “And from what I can tell, no one is even suggesting this.

“I don’t mean to be a fearmonger, but this is a very dangerous situation,” he concludes. “I’ll be focusing exclusively on this issue in the coming days.” Stay tuned…

For the second time this week, the stock market’s “circuit breakers” kicked in shortly after the open.

Trading halts for 15 minutes once the S&P 500 tumbles more than 7%. The idea is to give everyone — humans and robo-trading computers alike — a chance to pause and take a breath. Ideally, everyone calms down and the markets stabilize.

But barring a stunning reversal, the S&P will end the day down more than 20% from its most recent peak — the conventional definition of a “bear market.”

Here’s an updated version of an S&P 500 chart we shared on Monday from StockCharts, annotated by Greg Guenthner of our team. Assuming no rally later today, the S&P will have experienced its first bear-market drop going back to the Panic of 2008.

Elsewhere, crude prices are tanking again — down nearly 6% and barely hanging onto the $31 level.

Frightened money is piling back into U.S. Treasuries, pushing their prices up and yields down. At last check, the yield on a 10-year note is 0.7%. Only a month ago, it was over 1.6%.

Discouraging, to be sure. On the other hand, gold was at these levels a month ago and we were talking about seven-year highs.

We’ll revisit the words of our macroeconomic maven Jim Rickards late last month: “With the stock market plummeting, hedge funds and other institutional investors have to suddenly raise cash to meet margin calls on their positions in the equity markets. And they have to get the cash from somewhere. Gold is a very liquid asset that can quickly be traded for cash.”

That’s exactly what happened during the Panic of 2008, albeit in slow motion. Gold peaked in the spring near $1,000 and tumbled below $750 amid the panic selling that fall. But it was back above $1,000 by late 2009 and never looked back.

And who’s to say margin calls alone are behind the sell-off?

This week we’re seeing another longtime expert in precious metals come around to the view that gold prices are being manipulated. This time it’s Brien Lundin, a newsletter-industry stalwart and CEO of the annual New Orleans Investment Conference.

“I’m not a big advocate of the idea that government forces are manipulating the gold price on a daily basis,” he wrote on Tuesday. “But I think it’s obvious, especially if one considers the history of previous gold price manipulations, that someone, somewhere steps into the market at key moments. And this is undoubtedly a key moment.”

If you’re not up to speed on how this manipulation works, we did a deep dive last August. As we said at the time, gold manipulation is no longer a topic that automatically gets you outfitted for a tinfoil hat. And whether there’s anything to it or not, gold is a critical part of a well-balanced portfolio.

Now a brief word about “what to do” at a moment like this.

If you’re reading The 5 because you’re an existing subscriber to one of our paid publications — whether it’s Graham Summers or Greg Guenthner or Jim Rickards or whomever — you’ll want to keep an extra-close eye out for your issues and alerts.

Check your inbox a little more than usual; you might have to act quickly to unload a position or scoop up a bargain. Every one of our editors is vigilant for new developments that could affect their recommendations. They’re looking out for you.

If you’re one of the legions of new people who’ve joined us just this week, we direct you to the two special reports we posted for you a few days ago, here and here. The Permanent Portfolio strategy is designed to help you breathe easier through times like these. It more or less broke even during the scary year of 2008; breaking even while the S&P 500 crashes 37% is a very good thing.

Before we go, we’ll still try to keep it lighthearted. We see The Guardian has some advice for folks who suddenly find themselves thrust into the ranks of telecommuters… 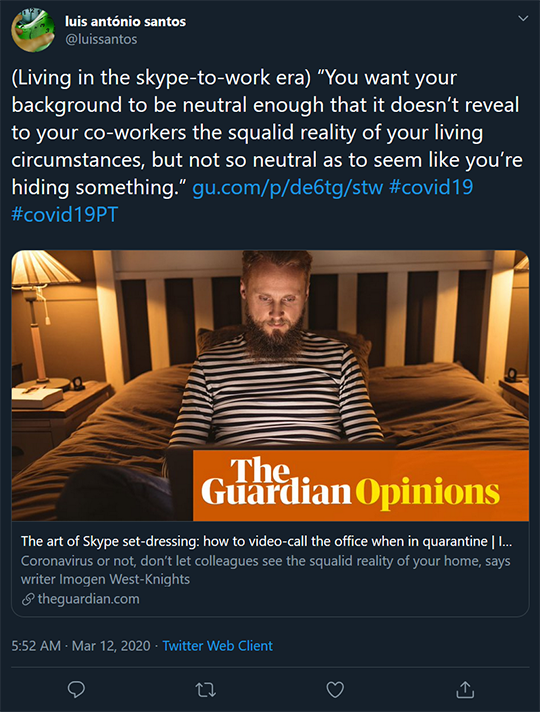 “It is time to learn an art that all layabout freelancers know in their bones: Skype set-dressing,” writes Imogen West-Knights.

Yes, if you’re conferencing with colleagues from home, you want the backdrop to look at least halfway respectable. Because they will notice.

West-Knights’ advice, and beware the British lingo here: “There are the obvious things: Don’t let there be an overflowing bin, or pile of dirty clothing or unmade bed peering out from behind you. Maybe have a pot plant visible, or a stack of erudite-but-not-obviously-staged books: whatever, as long as it says you do something with your leisure time other than eating cake slices from the Tesco discount shelf while watching Crufts on TV.”

“Pot plant.” Yeah, that definitely means something different on the other side of the pond. Heh…

P.S. Just a reminder that our team is battle-tested and ready to continue serving you as usual, no matter what.

Most of our editors already work from home, wherever they happen to live (including yours truly)… while our Baltimore-based management and support staff can pivot to a decentralized work-from-home system that’s already proven resilient through hurricanes, blizzards and riots.