Seldom has the stock market rallied so hard for so little reason.

In the 24 hours since we wrote you last, nothing has fundamentally changed as far as the coronavirus outbreak.

Indeed, you could easily argue matters are worse: The number of confirmed U.S. cases has more than doubled in only three days. Delta and American Airlines are canceling flights left and right for lack of demand. Overseas, there’s serious talk about postponing this summer’s Tokyo Olympics by a year or two.

But Wall Street is on a tear today. The mainstream narrative goes something like this: After the close yesterday, the market was poised for another drop today — until the president began dropping hints about a payroll tax cut. What looked like a 200-point drop has turned into a 750-point jump as we write this morning.

OK, but would a payroll tax cut really make a difference?

Memories are short, but there was a payroll tax cut during Obamatime, from 2011–12. The 6.2% Social Security tax was trimmed to 4.2%. (The self-employed still had to fork over the entire “employer portion.”)

If the idea was to goose the economy, it didn’t work. GDP growth for those two years was 1.9% — anemic even by the standards of the entire post-2008 “recovery,” which is the weakest on record.

If the idea was to goose the stock market, one could argue that worked better. The S&P 500 ended that two-year span up about 20%. But many factors were at work back then, not just the payroll tax cut.

Anyway, it’s all academic right now. A headline just popped up on your editor’s iPad citing White House officials as saying an economic response to the outbreak is “not there right now.”

Still… even though the rally today is mostly smoke and mirrors — we’ll get to the numbers shortly — there’s a powerful sign the worst for the markets might be nearly over.

For only the seventh time in 30 years, the VIX spiked yesterday to a closing level higher than 45.

“VIX” is short for the CBOE Volatility Index. It’s a yardstick for “implied volatility” in the market, as measured by options on the S&P 500 index. Over time, it’s become known as the market’s “fear gauge.” 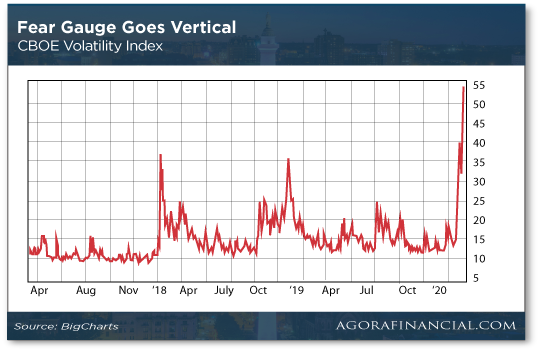 The VIX has a history going back to 1993. Since then, a key level has proven to be 45. Until yesterday, there were only six instances when the VIX spiked suddenly to close higher than 45:

Key point: In all but one of these episodes, you could have bought the Dow 30 stocks as soon as the VIX topped 45… held those shares for a year… and watched the index zoom up 1,500–2,500 points.

But a couple of caveats: First, the lone exception to date was a doozy. 2008 was a massive “head fake.” A year later, the Dow was 600 points lower.

The S&P 500 is also rallying sharply — nearly 75 points to 2,820. As you’ll recall from yesterday’s 5, the S&P was flirting with a danger zone that threatened to put an end to the bull market that began this month in 2009. The VIX, meanwhile, has pulled back to 48.5.

Even if there’s no good “reason” for the rally today, that’s all right. In fact, it’s encouraging.

“Since traders act on what they expect to happen, the stock market typically moves ahead of what actually happens in the world and in the economy. So while markets typically sell off ahead of the worst of any crisis, they also rebound ahead of any resolution.”

Still, if the last couple of weeks have left you skittish about the stock market, Zach has an idea about how to protect your portfolio and even grow it during times like these. More about that in tomorrow’s 5…

Traders piling back into stocks today are also dumping the safe havens.

Gold has shed 24 bucks at last check, the bid now $1,656. That’s still much higher than almost anytime in the last seven years.

Treasuries are also selling off. In the bond market, falling prices translate to rising yields. The yield on a 10-year T-note is up to 0.65%. That’s still much lower than almost anytime… ever.

That’s still extremely low by the standards of — well, almost anytime during the 21st century. “Lower for longer” is the watchword now.

In the last 48 hours, the media have latched onto a narrative about what happened. Saudi Arabian leaders wanted the OPEC nations plus Russia to join in a production cut, the better to cope with falling oil demand. But Russian leaders didn’t want to play ball, because they can ride out falling prices and they want to stick it to U.S. shale producers.

All that makes sense… up to the part about the Russkies’ motivation.

What if these lower oil prices are in fact an American-engineered effort to stick it to Russia instead?

It comes back to a book published in 2008 called The Oil Card: Global Economic Warfare in the 21st Century, by the veteran oil industry journalist Jim Norman. We had the privilege of interviewing him a few years ago.

One of the leading global oil traders in the 1970s quickly became one of the biggest players in the nascent oil futures market. Transworld Oil, controlled by John Deuss, accounted for up to 30% of NYMEX oil trade — most of it on the short side, betting prices would fall. Deuss had long-rumored ties to the CIA… and it was CIA chief William Casey who did much to implement NSDD-66.

By the late 1990s, Washington’s objectives had shifted: Higher oil prices would act as a brake on Chinese economic growth.

The Commodity Futures Modernization Act, signed into law by Bill Clinton in 2000, would help make it happen. The law “would eventually turn the oil futures market from mainly a zero-sum risk-hedging and price-discovery vehicle into a quasi-securities market,” wrote Mr. Norman.

“The price of oil is now less dependent on the actual supply and demand for ‘wet’ barrels than on the huge sums of money pouring into NYMEX futures from the pension and other investment funds, tacitly enabled and encouraged by U.S. regulators. Daily oil volumes on the NYMEX now dwarf global physical oil consumption.”

Then in 2014, Russia annexed the territory of Crimea — and Washington’s objectives shifted back to falling prices to punish Moscow. 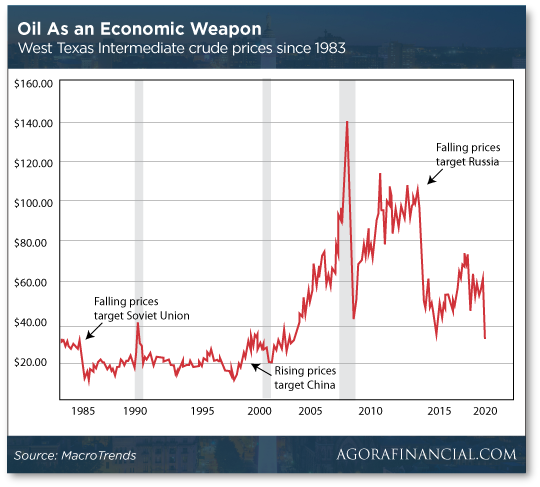 Here in 2020, the coronavirus situation gives Washington the best of both worlds.

Once Russia decided not to play ball with OPEC on production cuts, Saudi Arabia decided to launch a price war and pump oil flat-out. Did the Saudi royal family and the White House coordinate that decision, as happened during the 1980s? We don’t know… but we do know Saudi Arabia’s Crown Prince Mohammed bin Salman is tight with Trump adviser and son-in-law Jared Kushner.

Meanwhile, as you’re likely aware, the virus has put a major hurt on the Chinese economy… and some of the damage could be permanent as multinational corporations rethink their dependence on the Chinese supply chain.

As Norman wrote in The Oil Card, “Nation-states behave with logics, moralities and imperatives all their own. Who can know them? When these elephants rage, we pygmies are trampled. It pays to know when to get out of the way.”

As our 5 Mins. wind down, we stay with coronavirus… but we transition from the sublime to the ridiculous… 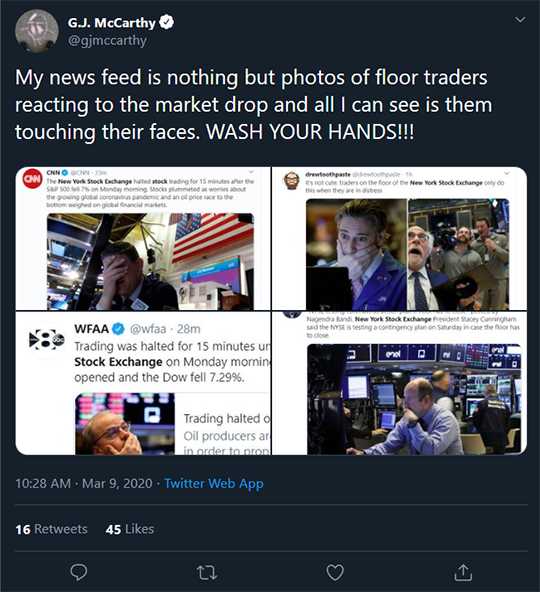 “When the numbers go bad, the news requires pictures of the people whose job is to look at the numbers,” writes Ashley Feinberg at Slate — “traditionally, pictures in which those people appear to be expressing their alarm or concern by clutching their faces. What would prevail in the contest between the financial photojournalism protocol and the infectious-disease protocol?”

The question answers itself. That’s despite the widespread guidance to avoid touching your face, at least when out in public. (We mentioned that more than two weeks ago.)

We noted yesterday and Friday how the stock-market sell-off those days might have been fueled in part by the fact that more and more coronavirus cases are being diagnosed in New York — close to home.

Wall Street types might be self-centered… but that doesn’t mean they’re self-aware. Heh…

To the mailbag, where Corona beer sales remain a hot topic…

“Attached is a poster from a local Mexican restaurant,” a reader writes — “an unfortunate ad campaign for Corona beer ‘Day of the Dead.’” 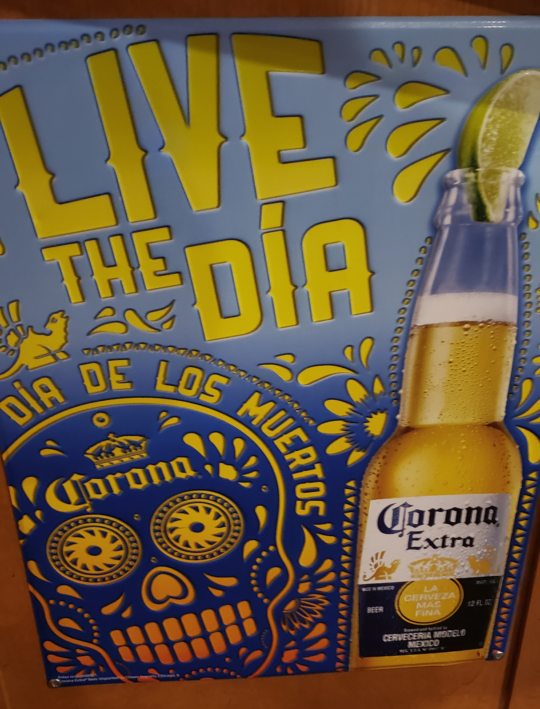 Meanwhile, after a reader suggested Corona as “the best inoculation available at this time against the coronavirus”… and your editor suggested Everclear as a superior alternative… we got the following additional feedback.

Sure, now we’re going to set off panic buying of Everclear and aloe. And possibly orange juice. Any Costco managers among our readership, you’re on notice!

P.S. The massive volatility this week reminds us of an unusual “glitch” that occurs in the stock market — even when trading is calm.

Former hedge fund manager James Altucher walks you through how it works when you click here. Please note: For reasons you’ll understand when you watch the presentation, this link will go dead when the market opens Thursday at 9:30 a.m. EDT.