This morning, a quick glance at your editor’s iPad reveals the headline/alert writers have thrown up their hands…

What? No narrative? Fine, we’ll stick our necks out about today’s sell-off: The virus is getting way too close to home for self-centered finance types.

In the City of London, the giant international bank HSBC sent more than 100 of its staff home today after one of them tested positive.

Meanwhile, two new cases are reported in New York City — both patients in intensive care. Of the 11 other cases in New York state, all but one are linked directly to a lawyer from Westchester County who works in… Manhattan. And the authorities have no idea how he came down with it.

[Update: The statewide total of cases just jumped to 22 — 18 of them linked to the lawyer.]

The Financial Times granted anonymity to a “senior executive at one large U.S. bank” who says, “You don’t want to wake up and find that the U.S. has half a million cases and someone tells you to send everybody home.”

So for market players, coronavirus is no longer something that affects “someone else.”

As the day wears on, the Dow has trimmed its losses to a little over 600 points.

The S&P 500 is off 50 points at last check, to 3,078. The S&P spent only a bit of last Thursday, Friday and a bit of Monday below the “psychologically important” round number of 3,000 — which bodes well at least in the short term.

Crude is not falling in sympathy. In fact, at $46.61, a barrel of West Texas Intermediate is holding up remarkably well in spite of the headlines.

There’s buzz that the OPEC nations have come to terms on a production cut. That’s usually bullish for oil prices… but these days, an OPEC production cut doesn’t mean much unless Russia is also on board. And so far, it appears Russia’s not.

With scared money seeking shelter, traders continue bidding up 10-year Treasury notes… which has the effect of pushing yields down. As we write, the 10-year yield is now approaching 0.93%.

The rate on the 10-year note is closely tied to that of a 30-year mortgage. If you’re looking to refinance (or to buy, for that matter), Freddie Mac says you can get a 30-year fixed mortgage for 3.29%.

By a hair, that eclipses the previous record low set around Thanksgiving time in 2012. 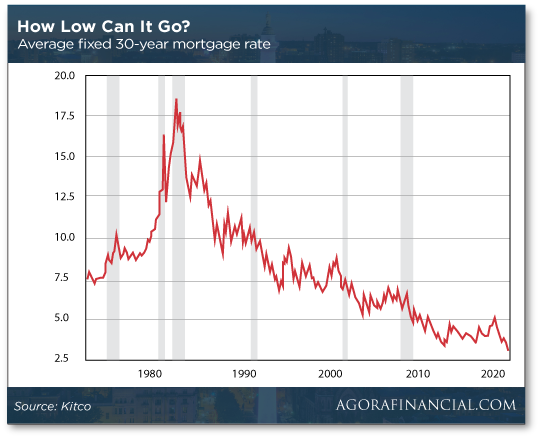 If Treasury rates continue falling… and if the gap between the 10-year T-note and the 30-year mortgage narrows (it’s historically wide right now)… mortgage rates might have further to fall.

It’s true that a Fed rate cut won’t encourage folks to go to restaurants or board an airplane amid the outbreak. But our income specialist Zach Scheidt’s comeback is: So what?

“Even though the Fed can’t directly affect the spread of the virus or actions that people and businesses take, the emergency rate will still have an effect,” he tells us.

“The Fed’s rate cut will keep mortgage rates lower (which will encourage more homeowners to refinance with a lower home payment). Lower rates will make it easier for businesses to borrow cash to get through any temporary weakness related to coronavirus.

“And lower rates will naturally drive investors to buy dividend stocks — which now pay much higher yields than you can get from bonds or traditional savings accounts.”

“A REIT trades on the market just like any other stock,” he reminds us. “But it has some distinct advantages.

“REITs are exempt from paying corporate taxes, so profits are able to accumulate more quickly.

In exchange for this special treatment, REITs are required to pay investors the majority of their operating income through dividend-like payments called distributions.”

“So if you act quickly, you can invest ahead of that flow of capital. And that means your REIT shares should increase in price — on top of the lucrative payments you’ll be receiving.”

Gold has staged an impressive comeback this week after getting crushed last Friday.

If that number holds by day’s end, it’ll be a new seven-year high, eclipsing the one from 10 days ago. As we say, impressive.

“Even with gold at seven-year highs, there’s still room for more gains if history is anything to go by,” says a recent Bloomberg News article.

We get very nervous when we see this sort of gold coverage from the mainstream. But we’ve read the article, examined the charts… and find little to quibble with.

To be sure, the amount of metal held by gold ETFs is now approaching a record set in 2012 — when the gold price was coming off its all-time highs. “But while bullion holdings have jumped this year, they’re still relatively low as a proportion of ETF assets.”

We’d say that’s a heck of an understatement. Holdings in the world’s top 15 stock and bond ETFs have exploded compared with 2012… 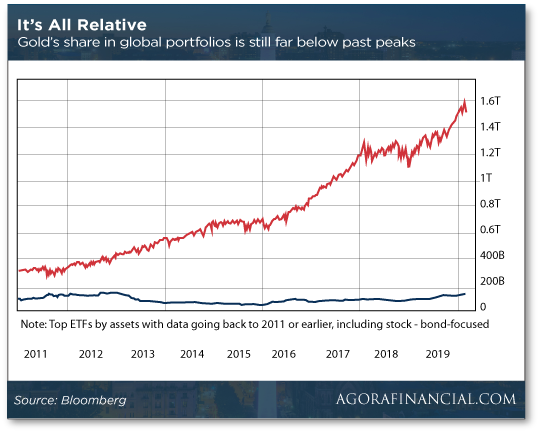 Even if stock prices collapse, there’s a lot of headroom for gold here. (That’s why Jim Rickards recommends a 10% gold allocation in your portfolio.)

“Despite market swings, early-stage U.S. biotechs are essentially on a sound footing,” Ray Blanco tells us on the science-and-wealth beat.

“We hear a lot about drug supply chains leading back to China, and it is worrisome with production shutting down and hundreds of millions of people being on at least partial restrictions, all the way up to full quarantine.

“COVID-19 is exposing supply chain weaknesses in the pharma industry. The effect could be greater onshoring of drug manufacturing in the future.”

But for the tiny up-and-coming companies Ray follows in his premium FDA Trader advisory, the impact is minimal. “These firms don’t make old generic drugs like antibiotics and anesthetics.

They’re almost all U.S.-based, and production is often not yet at industrial manufacturing scale. These experimental new drugs are generally made here. The stuff that gets produced overseas has usually been around for decades.

“The FDA hasn’t shut down either. While working on the virus crisis, it is still issuing on-time marketing decisions.” One of them could come as early as tomorrow — delivering a hefty instant payday.

The year 2019 was very good to more than 31,000 people who’ve joined the ranks of “ultra-high net worth individuals.”

A “UHNWI” possesses assets of more than $30 million. The number of people now in that rarefied air worldwide totals 513,244 — according to the property consultants Knight Frank.

And nearly half that total lives in the United States… 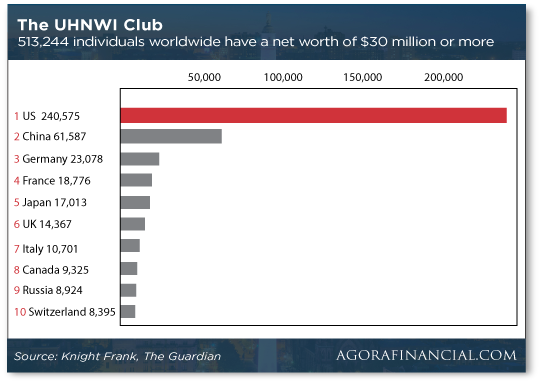 But the growth in UHNWIs is coming from outside the United States — especially in Asia and Africa. The researchers expect the total number of these people to grow 27% by 2024 — fueled especially by India, Egypt, Vietnam, China and Indonesia.

That’s the choice facing Starbucks amid the coronavirus outbreak… and the company is opting for the latter.

“Starbucks announced Wednesday that it will impose a temporary moratorium on the use of reusable personal mugs in its stores amid fears over the coronavirus outbreak,” reports The Hill.

Executive Rossann Williams describes the move as part of “a series of precautionary steps in response to this emerging public health impact.”

Among the other measures SBUX is taking — a limit on business-related air travel through the end of this month.

Of more significance — given that the company’s Seattle headquarters is smack in the middle of the most severe U.S. outbreak to date — the annual shareholder meeting set for March 18 will be a webcast affair. Literally, shareholders will not be able to attend in person.

“The event was slated to be held at Seattle’s WAMU Theater,” says CNBC, “which has a seating capacity of up to 7,200 people.”

Anyway, there’s good news for both the environmentally conscious and cost-conscious Starbucks customers — they’ll still get their 10-cent discount if they bring in their personal cup.

Wait, so that’s two things to carry — the personal cup and the disposable one.

But amid the turbulence, one of our newest research services is delivering steady gains. We’re talking about 33 closed trades since the first of the year… and 29 of them are winners. One of them doubled in just three trading days this week.

Best of all, you get one of these money-doubling trade opportunities by email or text — your choice — every day the market is open.

Curious? Check it out at this link. Please note we can accept only 200 new members today.