The figures are murky… but it appears Amazon no longer gets a “rebate” when filing its income taxes.

We begin a potpourri of tax-season items today with a follow-up from two years ago. Back then, we took note of a study from the Institute on Taxation and Economic Policy. It ran the numbers on most of the Fortune 500 companies and found 15 of them actually collected money from Uncle Sam.

That’s right. Amazon’s effective tax rate was minus 2.5% — thanks to a tax break that lets companies write off the value of executive stock options.

No more, apparently. In its latest annual 10-K statement filed with the Securities and Exchange Commission, AMZN calculates it will fork over $162 million this year, with another $914 million deferred to later years under the rules for depreciating certain capital investments. So Amazon’s effective tax rate for the 2019 filing year is plus 1.2%.

To be clear, we’re no fans of the corporate income tax, in any amount. Whatever a company pays in income tax is eaten by someone else eventually — lower wages for workers, higher prices for consumers, whatever.

But Amazon actually collecting money from the U.S. Treasury during 2017 and 2018 was an outrage. Assuming the numbers are accurate, that’s no longer the case.

Meanwhile, small businesses might be subject to a higher audit rate under the 2017 Tax Cuts and Jobs Act.

At least that’s our takeaway from reading one of those how-to-avoid-an-audit articles that begin littering the internet around this time of year.

As we noted a month ago, the chance of your individual return being audited has fallen by about 50% over the last decade, thanks to a shrinking IRS budget and workforce. (Hooray!)

In addition, the 2017 tax law has severely shrunk the number of individual filers who are itemizing their deductions. The Tax Foundation reckons 13.7% of taxpayers will itemize this spring; if the old tax rates and rules were in place, that figure would be 31.1%.

Ugh. We can only imagine that’s going to mean small business — where the tax code’s loopholes are plentiful but also extremely vague. And unlike big corporations, small businesses can’t afford the legal firepower to mount a vigorous defense in a borderline case. Bleah…

And then there are the companies engaged in bald-faced profiteering from the complexity of the tax code — at taxpayers’ expense.

Turns out more than 14 million lower-income taxpayers forked over about $1 billion last year for tax-prep software they could have gotten for free. So concludes an audit released yesterday by the Treasury Inspector General for Tax Administration.

That’s because the IRS’ “Free File” program — launched in conjunction with the likes of TurboTax and H&R Block — is hellaciously complex, and the bureaucrats don’t care.

“The program,” reports the ProPublica website, “has been the industry’s tactic to beat back any possibility of the IRS creating its own free tax filing options. It makes free tax prep software available to most Americans, but Intuit and other companies have also found ways to direct people away from Free File and instead to commercial ‘free’ editions, which are not always free.”

The IRS responded that it will “begin a dialogue” with the tax-prep firms “to identify opportunities to increase awareness about the program.”

Uh-huh. Sounds like D.C.-speak for “Stuff it, we’ll keep doing whatever the hell we’ve been doing because we can.”

[Ed. note: You can’t do anything about the injustice of the system, but you can do everything in your power to shrink your tax bill to the bare minimum. With that in mind, we announce the release of the Rich Dad 2020 Tax Guide.

Robert Kiyosaki’s team of tax specialists has revised and updated this annual guide to reflect an ever-changing tax code. It’s stuffed with 91 obscure, totally legal hacks for keeping more of what’s yours. A brief sampling…

Of course, not all of them will apply to your situation. But just one could make the difference between stroking the IRS a big check on April 15… and collecting a substantial refund. You owe it to yourself to check it out at this link. There’s no long video to watch.]

The Dow is looking to join the S&P 500 and the Nasdaq in record territory.

The latter two of those indexes notched all-time closing highs yesterday. The Dow is playing catch-up. But as we write it’s up about a third of a percent at 29,375. If that holds, the Big Board will also set a record.

The rally train rolls on despite the coronavirus headlines becoming a bit more ominous: Tesla will delay deliveries of its Model 3 within China. Fiat Chrysler is warning supplies from China have slowed so much that it might shutter a factory in Europe. Nintendo will stop shipping its Switch console in Japan, because the epidemic has slowed production in China.

Helping matters, though, is an announcement that Beijing will slash tariffs on $75 billion of imports from the United States by half, a good-faith measure after the “phase one” trade deal.

And the noose tightens in Lebanon.

Back in October we took note of what the elite media condescendingly labeled “WhatsApp riots” — supposedly triggered by a new tax on mobile data. It was in fact the climax to decades of corruption and economic decline.

The government response included closing the banks for two weeks. “When they reopened,” reports Al-Jazeera, “they had instituted informal capital controls that initially set weekly withdrawal limits at around $1,000. But banks quickly lowered withdrawals to just a few hundred dollars per week.”

Monday this week brought a crackdown on withdrawals of foreign currency. At least one bank is limiting depositors to $400 a month.

Officially, the Lebanese pound is pegged to the U.S. dollar. Unofficially, the pound has plummeted in value 60% this month because dollars are in such short supply.

Bank account freezes like these are what our Jim Rickards calls “Ice-Nine” — a nod to the Kurt Vonnegut novel Cat’s Cradle. They’re a central theme of his 2016 book The Road to Ruin… and he says they might be coming to a country near you one day.

Or as he tweets this week, “After Cyprus, Greece and now Lebanon, how many more warnings do you need?” 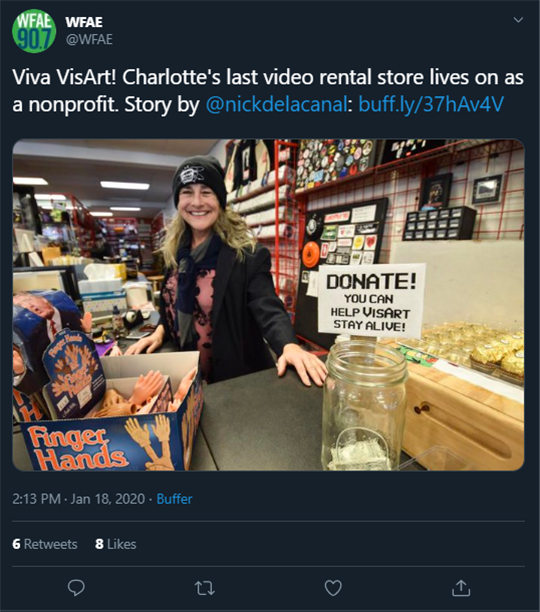 The last video store in Charlotte, North Carolina, recently won approval from the IRS to become a 501(c)(3) nonprofit. “It’s joining a growing number of video stores elsewhere in the country that say the model is a way to survive in the age of streaming,” reports Charlotte’s NPR station.

VisArt, the store is called. And it stocks 40,000 titles — mostly DVDs, but even some VHS tapes. “And they actually do rent, which is kind of wild,” says longtime employee Briana Kalbach.

As you might guess from the name, VisArt has long specialized in hard-to-find titles — cult films, documentaries, foreign movies. It’s attracted a loyal following that turns out to be ideal for staying alive as a nonprofit.

“It made good business sense because we had people who wanted to volunteer, and you can’t have unpaid volunteers for a for-profit business,” says lawyer Mickey Aberman — who bought the store nearly a decade ago.

Good news in an era when some things still aren’t available online, but VisArt has them, says the radio station — “like old Hanna-Barbera cartoons, Nickelodeon shows and other limited releases. They even had Spike Lee’s college dissertation tape — of which there are only two known copies — until a museum came and snatched it up one day.”

“A passport is an acceptable form of ‘Real ID,” a reader writes from Idaho after our latest business-travel alert in yesterday’s 5.

“Knowing that,” he goes on, “and with my driver’s license about to expire, I took my passport with me to the DMV when I went to renew my license. When I asked if the passport would qualify me for the ‘star’ license, the answer was a resounding, ‘No!’

“So I told them they could stuff their star license because my passport was valid for longer than their driver’s license and valid in foreign countries as well. Besides, if I forget my passport in an airport somewhere, I’m still legal to drive.”

The 5: To be clear, a passport is Real ID compliant for purposes of getting on an airplane. Good luck handing your passport to the trooper who pulls you over. (If we understand you correctly.)

It appears Maryland, Agora Financial’s home base, is being especially heavy-handed with Real ID enforcement. “In 2017,” writes James Bovard in The American Conservative, “the Department of Homeland Security notified the state that its Real ID licenses were invalid unless Maryland snared more documents for each driver. More than half a million drivers remain at risk for losing their licenses.”

Thus the many hoops Emily must jump through that she mentioned here yesterday, ahead of her visit to the state Motor Vehicle Administration later today. (Wish her luck.)

It took 15 years, but it now appears 2020 is the year Real ID will deliver a de facto national ID card.

That was the whole idea of the law, passed in the aftermath of the Sept. 11 attacks. There were two key provisions to the law…

As Techdirt recently summed up, “Federal investigators have turned state department of motor vehicles databases into the bedrock of an unprecedented surveillance infrastructure.”

For a long time, state governments both “red” and “blue” resisted Real ID’s requirements — partly because of the cost, but also because a national ID card doesn’t seem very American.

(And for that matter… Who the hell thought a yellow star — with all its historic connotations — was a good idea?)

As a result, the TSA kept pushing back its deadline for when air travelers needed Real ID-compliant identification to get on a plane. As recently as four months ago, we ventured to say the current Oct. 1, 2020, deadline would also fall by the wayside. Really, would the feds bar an estimated 85,000 people from boarding a flight one month before Election Day?

Alas, it looks as if the states are finally knuckling under. A casual search for “Real ID” in Google News this morning turns up story after story about publicity campaigns in state after state — encouraging people to get a new driver’s license, even if it’s not renewal time, if they expect to travel by air after Oct. 1.

But not to worry, the FBI’s Kimberly Del Greco recently testified to Congress: All this surveillance technology is essential “to preserve our nation’s freedoms, ensure our liberties are protected and preserve our security.”

Makes you feel all Lee Greenwood warm-’n’-fuzzy, don’t it?

P.S. Robert Kiyosaki calls it his No. 1 loophole this tax season.

Specifically he calls it “David’s loophole,” after a co-worker of his — who described how this obscure loophole worked for him.

Really, it didn’t just work — it changed his life, as you can see here.

Filing time is creeping up, so don’t wait.

How much money could it save you? Follow this link to see Robert’s No. 1 tax loophole.