So, Congress and the White House killed the “stretch IRA.” What will they kill next?

We return today to a familiar theme in these pages — government’s broken retirement promises. There’s a long string of ‘em, going back to when Social Security benefits became taxable income nearly 40 years ago.

The most recent broken promise came at the end of last year with passage of the SECURE Act. We’ll spare you the gobbledygook of what “secure” stands for. Our point today is that the law wrecked a method by which you could pass on tax-free income to your heirs.

The way it used to work was you could bequeath an IRA to your kids… and if they wanted, they could “stretch” out the withdrawals over many, many years — potentially the rest of their lives — even as the nest egg would keep compounding tax-free.

Now they have to clean out the account within 10 years. That way Uncle Sam collects his precious revenue much sooner. Capitol Hill’s budget wonks figure the change will raise about $15.7 billion between now and 2030.

We warned you about what was coming down the pike last April. Not that there was anything you could do about it, short of dying before the law took effect on Jan. 1, 2020. Heh…

“Congress seems to want to get money into retirement plans and then change the rules when the money’s trapped in them,” complains retirement-planning attorney Natalie Choate to The Wall Street Journal.

The Journal’s tax columnist Laura Saunders recently entertained the question of which retirement-geared tax breaks might be next to go. She offered up a list of four possibilities…

We daresay Ms. Saunders has a limited imagination. Around here, we can easily envision the end of the Roth IRA.

But before we do, let’s come back to the third item on her list — because while you might not remember, we came dangerously close to the “Rothification” of traditional 401(k)s and IRAs during 2017.

As the White House and Congress were thrashing out the broad outlines of the Trump tax bill, one topic that came up repeatedly that spring and summer was eliminating the pretax benefits of 401(k)s.

That is, your future 401(k) contributions would have been treated like a Roth account — where you pay income tax upfront, in exchange for the promise of tax-free withdrawals in retirement.

Of course, none of those proposals made it into the final bill passed that December.

But remember: The Republicans controlled both houses of Congress when “Rothification” was up for discussion.

So if Democrats sweep the White House and Congress this fall, one of the first things they might do in the name of “tax reform” next year is to pursue Rothification. It would mean an instant $100 billion or more in extra revenue every year.

If Republicans object, Democrats would merely point out how the notion was on the table for months while the GOP was in charge during 2017…

Then again, maybe it’s the Roth that would be eliminated. You might say passage of the SECURE Act is a step down that road.

Again, the promise of the Roth is that you pay the taxes upfront. After that, the capital gains and dividends grow in your account tax-free, and your withdrawals in retirement are also tax-free.

If you have a Roth account, ask yourself these questions. How many years are you from retirement? And what do you think your chances are that the rules won’t change between now and then? How lucky do you feel?

As long ago as 2013, Steve Forbes was warning that Roth holders’ luck might run out: “Their contributions have been made with after-tax dollars, with the promise that the ensuing benefits would be exempt from federal income tax. Slapping a special ‘emergency’ levy on these assets will become an irresistible temptation for politicians as the pot of assets gets bigger.”

“For many years, I was a huge proponent of Roth IRAs,” writes Agora Financial analyst Nilus Mattive, editor of our sister e-letter The Rich Life Roadmap.

That began to change during the last decade. “I no longer believe lawmakers will honor the promises they’ve made regarding Roth IRAs,” he said in 2016.

Now in 2020, people who inherit both traditional and Roth accounts can no longer withdraw that nest egg over their lifetimes.

“It’s only a matter of time before someone in Washington decides to take an even closer look at Roth IRAs,” he says now.

“A very probable outcome of that examination? Some new type of restriction on these accounts. Perhaps a limit as to how much of a balance can be maintained before taxes kick in again.

“And although it would represent a complete betrayal of public trust, it will be easily justified to the masses as ‘only applying to an arbitrary percentage (Top 1% sound familiar?) of “wealthy” Americans.’

“Wanna bet that this sort of change isn’t coming? If you do… keep funding your Roth IRA.”

As the week winds down, this is the story of the Wuhan coronavirus and the stock market…

The number of cases grows by the day — it now exceeds the number of SARS cases from 2003 — but Mr. Market can’t make up his mind whether it’ll make a difference to the global economy or individual companies.

Mr. Market’s mindset today is that it will. As we write, the Dow has tumbled more than 400 points to 28,441. Barring a reversal, the Big Board will end January in the red.

Oddly, crude is not sharing in the sell-off — stabilizing a little above $52.

But the safety trade is definitely in play. Hot money is flooding into Treasuries, pushing yields down; the yield on a 10-year note is approaching 1.52%, testing a four-month low. Gold, meanwhile, is again testing recent highs at $1,584.

Bucking the risk-off action today is Amazon — up 9% at last check after delivering its quarterly numbers.

You can read about the details anywhere; what stands out to us is that AMZN has joined the ranks of Apple, Microsoft and Alphabet (Google) with a market cap topping $1 trillion.

Two or three years ago we spoke regularly about the “Big 5” stocks — the five biggest companies by market cap, all of them “tech” names in one way or another — that had come to dominate the S&P 500.

Four of them are now in this trillion-dollar club. The fifth, Facebook, has struggled to keep up. And after its quarterly numbers noted here yesterday, it’s moving in the wrong direction. FB is down another 2.6% today, its market cap sinking below — yikes — $600 billion.

Amazon’s gangbusters holiday season notwithstanding, the final verdict on consumer spending for December is “meh.”

Consumer spending rose a modest 0.3% in December, according to the monthly income-and-spend report from the Commerce Department. That’s a major reason the GDP number yesterday was likewise “meh.”

Personal incomes grew 0.2% — less than expected. But the number was skewed a bit by a decrease in federal subsidies to farmers. 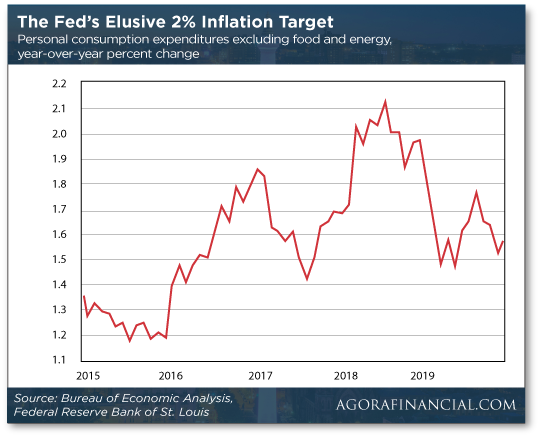 … Which reinforces the sense that if the Federal Reserve makes any change to interest rates this year, it’ll be a cut and not an increase. (Jim Rickards is looking for a cut in June.)

Color us unimpressed with the China-infiltrating-Harvard scandal. Frankly, it reminds us of “Russiagate.”

As you might have heard, the feds arrested the chairman of Harvard University’s chemistry department this week. The Wall Street Journal describes the case of Charles Lieber as “underscoring U.S. concerns that the Chinese government is trying to obtain cutting-edge U.S. research by exploiting U.S. universities and their professors and researchers.”

Lieber is a big deal, a pioneer in the field of nanotechnology. Former colleagues interviewed by establishment media are shocked. “Espionage? Fraud? Totally out of character,” said one to the Journal. “His whole world was creating research and publishing it.”

Except that Lieber is not charged with espionage or fraud. He’s charged with one felony count of lying to the Pentagon and the National Institutes of Health about Chinese funding for his research. Academics who accept federal funds must disclose foreign funding as well.

In a world where each of us commits “three felonies a day” — to borrow a phrase from attorney and author Harvey Silverglate — Lieber’s alleged offense seems like mighty small potatoes.

In fact, it reminds us of most of the prosecutions that came out of Russiagate. Failing to find any evidence of collusion with Russians, Special Counsel Robert Mueller pursued “process crimes” like obstruction or lying to the feds.

Makes us wonder: Did Lieber have a lawyer present when DoD and NIH were questioning him? If not, he almost surely walked into a trap sprung by the feds.

The Lieber case reinforces what we said two weeks ago: The “phase one trade deal” does nothing to alter the culture of reds-under-the-bed suspicion the federal government is cultivating — part of a new Cold War that could drag on for the next three decades.

Much depressing content today. How about a drink? If you’ve been observing “Dry January,” you can once again imbibe starting tomorrow.

“Brace yourself, bartenders,” warns the New York Post. “Dry January — the monthlong booze detox popular with resolution-minded New Yorkers — ends this weekend, and things are about to get sloppy.”

No, we’d never heard of it until today either. Supposedly, it was something the nanny-state government of Great Britain launched a few years back, and it’s catching on elsewhere.

More from the Post: “From a bartender’s perspective, Dry January ‘is almost like Catholicism with Lent,’ says Kenneth McCoy, who runs the whiskey bar Ward III in Tribeca and the Rum House in Times Square. ‘If you give up candy for a month and then you go back to it, you’re probably going to binge chocolate … People can’t wait to get back into the drink.’”

And so Feb. 1 is shaping up to be much like Jan. 31 — especially since it falls on a Saturday in 2020. Or maybe worse, since booze hits you harder after you’ve laid off it for a while. McCoy is bracing for “fights” as well as people “sleeping on the floor under the bar.”

But one bartender tells the tabloid he’s fully prepared: His mixed drinks will have lower-than-usual alcohol content. Sneaky, huh?

Have a good weekend (however you celebrate it),

P.S. As we go to virtual press, the sell-off is accelerating: United, American and Delta are suspending all flights from the United States to China. More to come Monday…