Not that anyone gives a fig… but yesterday the Congressional Budget Office projected a federal budget deficit topping $1 trillion this year.

We were lonely voices earlier in this century when decrying Uncle Sam’s spendthrift ways. In 2008, Addison Wiggin — our executive publisher and the founder of this e-letter — produced the well-regarded documentary I.O.U.S.A.

Well-regarded but not difference-making: At the time of the film’s release, the national debt totaled $9.62 trillion. A couple of years later, the tea party movement rose up in revolt — partly out of alarm over that ever-rising number.

Didn’t last, though. Today, the national debt totals $23.2 trillion, the tea party got swallowed by the cult of MAGA and Rush Limbaugh tells his listeners, “Nobody is a fiscal conservative anymore.” 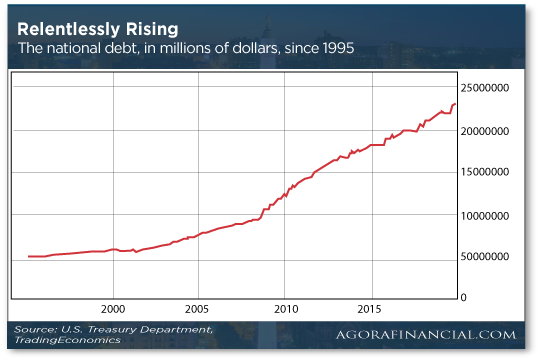 He sort of has a point: Last year we noted how many of the deficit hawks of old around Washington, D.C. — Reagan aide Martin Feldstein, Clinton aide Alice Rivlin — have flown off to the great beyond.

What should be alarming is that the CBO report anticipates average annual deficits of $1.3 trillion for the next 10 years.

Granted, trillion-dollar deficits are nothing new. We had them from 2009–2012. But those deficits were the result of extreme measures to combat the Great Recession. Government spending usually rises in an effort to revive the economy during a recession.

But we’re not in a recession now. Indeed, we’re more than a decade into the longest economic expansion on record.

What happens when the next recession inevitably rolls around? $1.5 trillion? $2 trillion? By the way, the CBO’s projections assume no recession in the next 10 years. Good luck with that.

There are two major problems with these rising numbers, even if no one wants to acknowledge them. (Limbaugh last year: “The great jaws of the deficit have not bitten off our heads and chewed them up and spit them out.”)

The first problem is that a rising national debt is like a lead weight on the leg of the economy.

For years, our Jim Rickards has cited the groundbreaking research by the scholars Kenneth Rogoff and Carmen Reinhart. “A 60% debt-to-GDP ratio is considered by economists a red line beyond which debt levels may become nonsustainable,” Jim explained in his 2019 book Aftermath.

“The Reinhart-Rogoff research shows there is an even more dangerous threshold of 90% debt-to-GDP where the debt itself causes reduced confidence in growth prospects partly due to fear of higher taxes or inflation, which results in a material decline in growth relative to long-term trends.

“This is where the debt death-spiral begins. The U.S. is well past the 90% death-spiral trigger level and the situation grows worse by the year.”

Yes, that compares favorably with the No. 1 country by this measure — Japan at 237.5%. But we’re only 20 years or so behind Japan, Jim wrote. “The Japanese suffered the infamous ‘lost decade’ from 1990–2000 and have suffered almost two additional lost decades since.”

Meanwhile, the economic expansion since the Great Recession is the longest on record, yes — but also the weakest. “The U.S. had its first lost decade from 2007–2017 and is now well into its second lost decade.”

The other major problem is that sooner or later the rest of the world will lose confidence in both U.S. Treasury debt — and the U.S. dollar.

We realize on this score we open ourselves to the accusation of crying wolf. Persistent warnings from us and others have yet to materialize.

But evidence is growing that the crisis in the “repo” market is the result of a confidence crisis in Uncle Sam’s finances.

As a reminder, repos, or repurchase agreements, are short-term loans Wall Street firms take out with each other, putting up supposedly safe U.S. Treasuries as collateral.

The repo market seized up in mid-September for reasons the powers that be have yet to come clean about… and the Federal Reserve has stepped in to shore that market up.

“In other words, the Federal Reserve has purchased roughly 70% of all net Treasury debt to hit the market since starting its $60 billion-a-month large-scale asset buying program.” 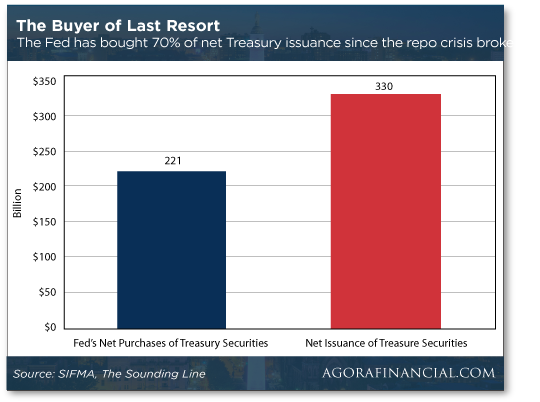 Until recently, the Fed owned only about 15% of the “debt held by the public” — that is, excluding the IOUs held by the Social Security and Medicare trust funds.

That means as the national debt swelled last spring and summer, all the traditional buyers of Treasuries — pension funds, insurance companies, foreign governments — dialed back their purchases big-time. The Fed had to step in.

We know for sure — because the Treasury Department publishes it on its website — that the Chinese dialed back their Treasury holdings every month from June–November, which is the most recent figure available. And even then, the Chinese government still owns 6.3% of this debt.

Write Gal Luft and Anne Korin in their 2019 book De-dollarization: The Revolt Against the Dollar and the Rise of a New Financial World Order…

“How long do we think China will agree to fund the very same U.S. military that is preparing to fight it, the education system that is striving to outsmart it and that is closing its gates to Chinese students, the research and development infrastructure that aims to undercut its technology development programs and the Department of Justice lawyers who are prosecuting its companies?”

And it’s not just China: “Foreign creditors are increasingly anxious about the growth trajectory of the U.S. debt,” Luft and Korin write.

All told, foreign creditors own about 43% of the debt. (Japan owns even more than China.)

“They realize that continuous growth in U.S. obligations means they will be put under pressure to buy more and more U.S. debt at a time their economies are facing serious challenges.”

If they don’t buy, that means Uncle Sam’s interest expense blows out and “the U.S. government will lack the funds needed for social programs and national defense.”

When does the crisis moment hit? Well, as we just said, maybe it already has… and the Fed is scrambling to paper it over.

And how long can that last?

Sorry, no definitive answer from us. All we know is what Nixon economic adviser Herb Stein (father of Ben) once said: “If something cannot go on forever, it will stop.”

To the markets, which are shaking off worsening news about the Wuhan coronavirus. No, this is not a repeat from yesterday.

At least the growth in the number of confirmed cases has slowed since we wrote you yesterday — up 24% to 6,152, with 132 deaths. (The Dutch website BNO News is even more current than the Johns Hopkins dashboard we told you about Monday.)

But British Airways has halted all flights to Shanghai and Beijing, while United has canceled 24 flights next week to Shanghai, Beijing and Hong Kong. Starbucks has closed more than 2,000 of its Chinese locations.

Still, as we write, the major U.S. stock indexes are up about a third of a percent. Gold is recovering from a minor beat-down yesterday at $1,570. Crude has recovered the $53 level.

The standout earnings reports come from Apple, which is returning to profit growth (took a while, but folks are finally deciding to drop the big bucks for an iPhone 11)… and Boeing, where the 737 Max fiasco has resulted in the first annual loss since 1997.

Still, even as stocks rise, there’s an element of the safety trade in play. With investors piling into bonds, the amount of negative-yielding debt is once again on the rise.

From a peak of $17 trillion in mid-2019, the amount of debt carrying a negative interest rate fell to $11 trillion by December. But with lingering virus fears, debt is in higher demand. Higher demand equals rising prices… which equals falling rates. The amount of debt with a below-zero rate is back to $13 trillion.

How this debt can be considered “safe” is beyond our comprehension. If you’re not getting a yield from it… indeed, if you’re paying for the privilege of borrowing… then your only hope of coming out ahead is by selling the bond for a higher price — and still lower yield!

From the department of problems we hadn’t started to worry about yet: sports banter in the workplace.

It’s a bad thing and managers should try to curb it, says Ann Francke, head of Britain’s Chartered Management Institute: “A lot of women, in particular, feel left out,” she tells the BBC. “They don’t follow those sports and they don’t like either being forced to talk about them or not being included… It’s a gateway to more laddish behavior and — if it just goes unchecked — it’s a signal of a more laddish culture.”

The BBC did air an opposing viewpoint. “If you ban football chat or banter of any description, then all you’re going to do is alienate the people who actually want to communicate with each other,” says sports journalist Jacqui Oatley. “It would be so, so negative to tell people not to talk about sport because girls don’t like it or women don’t like it. That’s far more divisive.”

The Twittersphere seems to side mostly with Ms. Oatley. For example… 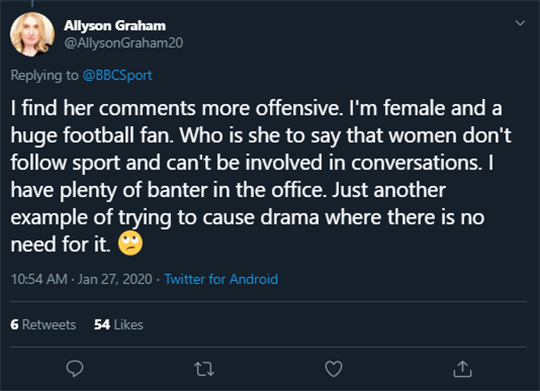 Office manager Debra Smyth wonders what’s next. Limits on Game of Thrones chatter, maybe? “Where would it end? Banning people with children talking about them so as not to alienate people without children? Certainly not!”

“Dave, I need your help if possible,” a reader pleads.

“I know in the past there’s been some trouble where readers haven’t received their emails from The 5 min. Forecast. I was one of those. I didn’t worry, though, because you said the bugs were being worked out. They did reappear, but only for a short time. Now they haven’t been hitting my inbox for about two weeks.

“I sent my concerns about this to customer service and the answer I received was some lame response about whitelisting, blah, blah, blah.

“I know that I can go to the website to read the latest issue, but it sure would be a lot more convenient if it started appearing in my inbox once again. Thanks in advance for looking into this.”

The 5: We’re working on it. Well, the people who specialize in email “deliverability” are working on it. Tirelessly. They’ve even brought in outside consultants — that’s how seriously they’re taking the matter.

All we can say at this stage is please bear with us and thank you for your continued patience.

P.S. Have you seen this three-minute demonstration? It reveals one of the most novel new ways to make money from the market.

And it comes offline the moment the market opens tomorrow at 9:30 a.m. EST — for reasons you’ll see when you click.