“Let me be clear, I’m definitely not calling the end of this decade-long bull market,” says an email from our income specialist Zach Scheidt.

You just know there’s a “but” coming — as surely as it comes whenever a reader writes in and starts by saying, “I really love The 5…” Heh.

“But you need to be careful about which types of stocks you own.”

“Some of the research I'm starting to read is showing a bit of concern about how expensive stocks are,” Zach explains.

“Remember, when you own a share of stock, you own an actual piece of the company. And the reason this piece is valuable is because of the profits — or earnings — that this company generates.

Here’s the thing: With the major U.S. stock indexes at or near record highs right now…

“Over the last year, stocks moved steadily higher. But on balance,” says Zach, “earnings for the companies in the S&P 500 did NOT grow by nearly as much.

“So the reason stocks traded higher is because investors were willing to pay MORE for the same amount of profits.”

Ever see a headline or hear chatter about “multiple expansion”? That’s what we’re talking about — the price-earnings ratio rising because the stock price is growing at a faster pace than the company’s earnings.

Result: “These stocks are starting to be a bit expensive compared with the amount of earnings these companies are generating.”

Or a lot expensive. We’re lookin’ at you, Tesla.

As noted here last week, TSLA’s been on a tear the last three months — up 135%. Yesterday, the company’s market cap surpassed $100 billion. By that measure, it has overtaken Volkswagen as the world’s No. 2 automaker, behind only Toyota.

Meanwhile, Tesla’s price-earnings ratio is… well, you might say it’s infinity. Because the company booked a loss in the most recent quarter.

Yes, we’re spotlighting an extreme case. But you don’t have to look very hard on your favorite stock-screening website to find companies whose P/E ratios sailed higher throughout 2019, even as earnings growth slowed or stalled.

Don’t get Zach wrong here: He’s not saying, “Sell everything.” (Although he is saying, “Don’t buy TSLA at these insane heights.”)

“Markets are still in a very positive trend and we don't want to miss out on the gains that are accumulating day after day.

“But I would say that it’s time to start being a little bit more alert to potential risks and to make sure you have a plan in place in case markets start to pull back.”

And if you’re looking to put money to work right now, be choosy.

“Not all stocks are expensive compared with the earnings they're generating,” Zach says. “And not all companies have seen their profits stay relatively flat over the last year.

“For instance, many of the technology stocks have been trading higher for the last year because their earnings have been growing. And also because investors are looking at the opportunities these companies have in front of them — things like artificial intelligence, 5G network technology, streaming media opportunities, health care developments and autonomous driving.

“And since these trends are certainly going to drive innovation and profits for years to come, investors are willing to pay a premium price to own these companies and participate in those profits.

“Consumer stocks are similar… We know that U.S. shoppers have more money to spend thanks to higher wages and very low unemployment. And that spending will naturally push retail sales higher and help drive profits in the year ahead.”

[Ed. note: In the meantime, we’re proud to announce one of Zach’s high-end services came out tops in an audit of 47 top investment newsletters across our industry. That’s No. 1 in total trading profits and in winning trades.

We recently reopened this service to new readers after keeping a lid on total membership during the final months of 2019. No promises about how long access will remain open… so best check it out now, while you still can.]

After a flat day yesterday, the major U.S. stock indexes are solidly in the red today.

Looking ahead, “I suspect traders will use the China virus news as an excuse to bail if the market starts to slip,” says our chart hound Greg Guenthner. “Oil was also tanking early this morning — down almost 3% by midmorning.

“Gold was steady. We could see a nice gold rally if the virus news stays negative.” In the meantime, the Midas metal is up about five bucks at $1,563.”

The lone economic number of note is the Conference Board’s index of leading economic indicators. It slipped 0.3% in December, dragged down by the slump in manufacturing.

This thing with Jeff Bezos’ phone being hacked? What a hall of mirrors.

How do we know the Amazon CEO/Washington Post owner’s phone was hacked and that the culprit is Saudi Arabia’s Crown Prince Mohammed bin Salman? From a forensic analysis that Bezos himself commissioned.

How did that analysis wind up in the hands of officials at the United Nations, who solemnly called for further investigation by U.S. authorities? One of those officials says she was already looking into the relationship between phone hacking and the murder of journalist Jamal Khashoggi at the hands of the crown prince’s henchmen. Then “a person she met in the course of her work” (those are The Wall Street Journal’s words) alerted her to the existence of the research.

Look, we get that Bezos feels double-crossed. His old buddy the crown prince — MBS, as he’s known — went and had one of his Washington Post journalists killed, and in most brutal fashion. Here’s a picture of Bezos and MBS in happier times… 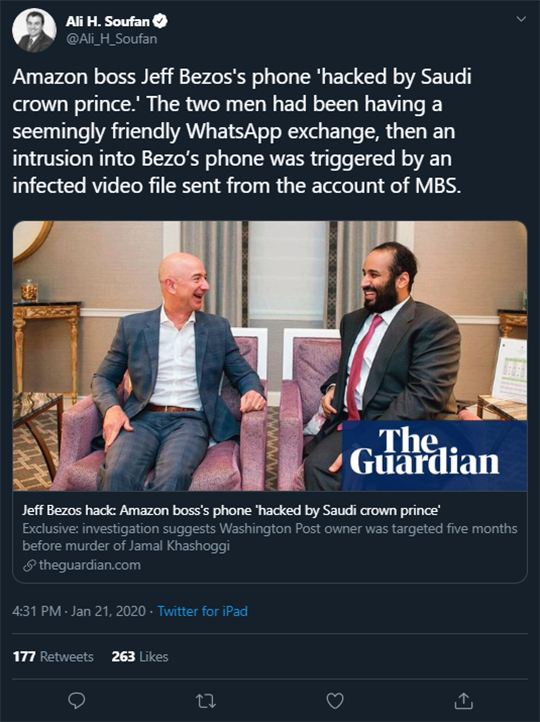 But for the rest of us to believe that MBS’ WhatsApp account was used to compromise Bezos’ phone? Right now that’s still a stretch.

As we’ve been saying for seven years, the incentives in the cybersecurity industry are all fouled up.

The biggest money usually comes from federal contracts… so cybersecurity firms naturally will attribute large-scale, headline-grabbing attacks to governments that Washington doesn’t like — China, Russia, Iran, North Korea. “Hey, look at what your enemies did! We’ve got the tools to stop it!”

But in reality, “attribution” of cyberattacks is nearly impossible to pin down… because it’s so easy for hackers/leakers to cover their tracks and make it look as if someone else did it.

Same principle applies here, only more so. Again, the outfit that inspected Bezos’ iPhone X — Washington-based FTI Consulting — was paid by Bezos. The U.N. hasn’t looked into the matter independently. Same deal with the emails pilfered from the Democratic National Committee in 2016; the DNC paid CrowdStrike to investigate and CrowdStrike obliged by saying the Russkies did it. The FBI never conducted its own investigation.

Don’t get us wrong. We hold no brief for MBS around here; we were describing his reckless tendencies four years ago when he was still the deputy crown prince. He might well have hacked Bezos’ phone. But “research” that Bezos paid for and was shopped around to the U.N. should convince no one other than Bezos himself…

Whenever the next recession rolls around, “I’ll have my entire face in a basket of chicken wings,” writes Grace Perry of the foodie website The Takeout.

Ms. Perry spotted an article in the trade publication QSR. “Restaurateurs know that this boom market can’t last forever,” it says. “And already some indicators seem to portend a potential cool-down.”

Makes sense to prepare now, right? Meals out are among the first things cut from household budgets when money’s tight.

But Friedman says his 85-unit chain will be ready. Twenty wings and a basket of fries for $20? As small luxuries go, that’s affordable. But by the same token, he says the extra cost of delivery services like Grubhub might be a bridge too far.

“I think people are going to start to say, ‘I could go get it and save $10. That’s real money,’” Friedman says. Thus he’s been careful to limit his firm’s share of sales from third-party services to about 15% of the total.

Back to Ms. Perry: “He believes… selling 20 wings and fries for $20 is a recession-proof business model. Which, honestly? Fair.”

To the mailbag: “Been watching the tens of billions of ‘repo’ money from the Federal Reserve mysteriously disappearing.

“So who is receiving all these hundreds of billions of dollars? Does the Fed have a list of banks that are gobbling it all up? And what are the banks doing with the money? Just covering their asses because they are so overleveraged?

“Is this info available through the Freedom of Information Act, or is it a shell game within the Fed?”

The 5: We should back up a bit to refresh readers’ memories. The market in repurchase agreements, or “repos” — overnight loans that Wall Street firms take out with each other to conduct their daily trades — seized up in mid-September. Since then the Federal Reserve has stepped in to prop up the repo market.

Most of the money the Fed lends out gets paid back with interest within 24 hours… but the Fed is also buying Treasury bills from these firms at a pace of $60 billion a month, a reprise of the Fed’s “quantitative easing” efforts from 2008–2014, even if the Fed doesn’t want to admit it.

Now, to respond to the inquiry: The website Wall Street on Parade has FOIA’d the New York Fed to a fare-thee-well… but keeps getting blown off. Four months on, we’re still in the dark about who’s getting the money or why they feel they need it.

In the absence of facts, theories abound. We like the one about JPMorgan Chase, which we explored in early November and which chaps our rear end all over again this morning; we see JPM CEO Jamie Dimon is spouting off at Davos about the failures of socialism.

Not that he’s wrong, but jeez… with friends like Dimon, capitalism needs no enemies.

Meanwhile, the estimable Jim Grant, longtime editor of the newsletter Grant’s Interest Rate Observer, believes Wall Street is finally casting a no-confidence vote on U.S. Treasury debt. (Treasuries are what these firms put up as collateral for these overnight loans.) That is, Washington’s spendthrift ways are finally catching up.

It’s as credible a theory as we’ve heard — and as longtime “deficit hawks” around here, we’d like to believe it, seeing as the national debt now tops $23 trillion.

P.S. What if you could have a “back door” into an IPO?

Hot IPOs can spike as much as 613% on the first day of trading. Great for the insiders who owned a piece of the company before it went public. You? Not so much.

But now there’s a legal way to “jump the line.”

Curious? Check out the scoop on “the mother of all IPOs."