Among the big market headlines we see this morning — the quarterly numbers from one of the FANG stocks, Netflix.

When it comes to NFLX, analysts pay less attention to sales and profits and more attention to subscriber count. Worldwide, Netflix crushed analyst expectations for subscriber growth… but domestically, it missed its own forecasts for the third-straight quarter. With that, NFLX is down nearly three-quarters of a percent on the day.

Netflix joins its fellow FANG Amazon in unfortunate company — trading below all-time highs they set last year, while the broad stock market is in record territory. NFLX and AMZN were once leaders; now they’re laggards.

Which helps us spotlight the changing nature of “tech” stocks as we enter the 2020s, something noticed by our science-and-wealth maven Ray Blanco…

“You probably have more silicon in your house than cleaning products,” Ray explains, trying to pique our curiosity. “So I ask, are computer chips or Clorox products more of a consumer staple?”

Staples are the things people buy no matter how the economy is performing — toilet paper, mac and cheese, over-the-counter painkillers. Demand is steady, not “cyclical,” not riding the economy’s ups and downs.

“As tech smashed through to new records most of last year while facing numerous acute headwinds,” Ray ventures, “it’s safer to say some tech stocks aren’t cyclical either… We need to at least consider some tech stocks are more like hybrid tech staples.”

Which brings us to a phenomenon that quietly dominated the stock market for most of last year. It reinforces Ray’s point.

For the first eight or nine months of 2019, the broad market struggled to make new highs. The top-performing sectors in the S&P 500 were, by and large, the safety-oriented ones — utilities, real estate and the aforementioned consumer staples.

But along with those three havens for scared money, there was another top performer that on the surface didn’t belong with the others — technology.

We need to be specific when talking about the “technology” sector, though. The people in charge of categorizing the S&P 500’s 11 sectors exclude many names you might think of as tech stocks. Indeed, none of the FANG stocks qualifies. Facebook, Netflix and Google parent Alphabet are classified under “Communication Services.” Amazon, meanwhile, is considered “Consumer Discretionary.” Sorta makes sense, right?

The tech sector — to be precise, it’s called “Information Technology” — is dominated by names that deal in hardware and software. Cisco, Intel, Qualcomm, Nvidia, IBM…

…Plus the two biggest companies in the world based on market cap, Apple and Microsoft.

On the surface, it makes no sense. Why would these companies be considered a safe haven along with the makers of toothpaste and soft drinks… unless the goods they produce have become “staples” in their own right?

And look at the outperformance here. OK, Clorox had a lousy 2019… but other consumer-staple names like Procter & Gamble and General Mills had their best years since the 1990s and they still got stomped by Apple and Microsoft. 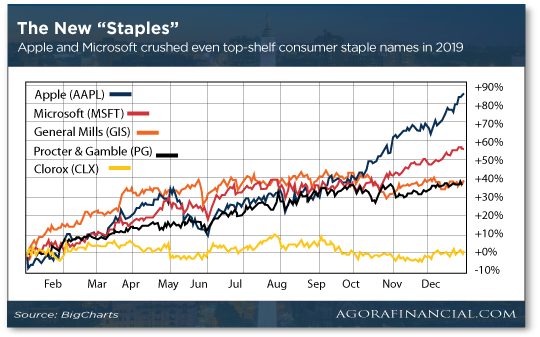 “Some of these big names in tech are starting to pay dividends, a classic characteristic of defensive staple stocks,” Ray points out.

“Apple has grown from a quirky but innovative tech startup to a media-producing, software-licensing, innovative platform-designing tech behemoth. Positive growth year after year, coupled with a business model that allows them to position their products as a tech, fashion and service all at once, is all you need to know as to why Apple shares appear unstoppable.”

But if you’re a long-term reader, you know that already: Our income specialist Zach Scheidt has been singing Apple’s praises in The 5 for more than four years — specifically because it’s transitioned from a go-go growth company to a mature stalwart. At its current elevated price, the dividend is only 1%… but as we’ve said before, AAPL under CEO Tim Cook is committed to returning money to shareholders via both dividends and buybacks.

Microsoft, meanwhile, sports a likewise modest dividend of 1.25%. But the dividend has grown every year for 16 years now. Thus MSFT is only nine years away from joining the rarefied company of “dividend aristocrats.”

Bottom line: “MSFT and AAPL,” says Ray, “are tech staples you have to own for the long haul.”

[Ed. note: If you’re willing to step a little further out on the risk curve, Ray is keen to tell you about a technology breakthrough that will set off a $2.9 trillion boom during 2020. You won’t want to wait to grab your share — as you’ll see for yourself when you click here.]

The S&P 500 and the Nasdaq are powering higher into record territory on this hump day.

At last check, the S&P had advanced to 3,331 while the Nasdaq crossed the 9,400 mark. The Dow is likewise in the green but at 29,256 it still has some climbing to eclipse last Friday’s record close.

Aside from Netflix, other big earnings numbers include IBM, which delivered a “beat” and is up 3.7% as we write.

Gold is steady at $1,556. Crude is sliding with the release of the Energy Department’s weekly inventory numbers; at $57.09, a barrel of West Texas Intermediate is the cheapest since early December.

The big economic number of the day is existing-home sales, up 3.6% from November to December — the strongest showing in nearly two years.

Also out today is the Chicago Fed National Activity Index — a reliable recession indicator of 50 years’ standing. The three-month moving average chimes in at minus 0.23 — sluggish economic growth, but nowhere near the minus 0.70 threshold for a recession.

Gee, maybe the Davos set is now more willing to talk about gold.

In our 2020 gold outlook episode of The 5, Jim Rickards discussed how the world’s wealthiest keep their mouths shut about gold — even though nearly all of them have a large stash of bullion in a nonbank vault. “Of course, they won’t say so on TV because they don’t want to spook retail investors into dumping their stocks and bonds” — which would put a hurt on their stock and bond holdings.

But this week at the global elite gathering in Davos, Switzerland, the founder of the world’s biggest hedge fund is talking up gold on CNBC’s Squawk Box.

Specifically, he says gold will outperform during and after the next recession — whenever that occurs — because the Federal Reserve and other central banks will be unable to return to anything resembling normal levels of interest rates.

Only last week, Bridgewater’s co-chief investment officer said that failure to “normalize” would push gold in time to $2,000 an ounce.

Now a follow-up to the year-end 2019 gold rush in Germany.

As noted here just after New Year’s Day, German law now forbids anonymous purchases of gold in amounts of more than 2,000 euros — about $2,218. Thus there was a huge run on gold in December before the law kicked in and the limit was still 10,000 euros.

“Supporters of the new law say that the lower limit helps to prevent tax evasion and money laundering,” says Jim Rickards. “But German citizens know that the real reason for reporting requirements on small purchases is to make it easier to confiscate the gold when the time comes.”

The Russian Central Bank, meanwhile, is slowing down its gold purchases. Do they finally feel like they have enough?

On the 20th of every month, the central bank reports its gold reserves. As you can see from the latest totals on Monday, Russia is still adding to its stash… but the pace of accumulation decelerated during 2019… 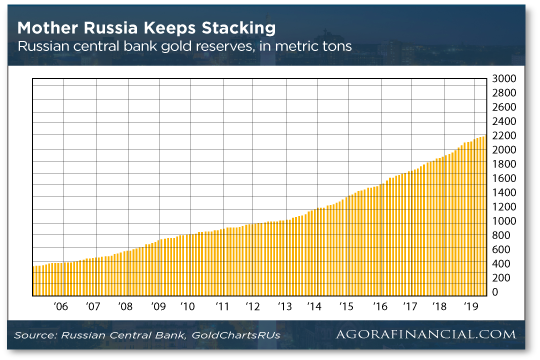 Are they less interested in gold now that they’ve dumped nearly all U.S. dollar-based securities from their foreign-exchange holdings (including U.S. Treasuries)? Or are they just compensating for the breakneck pace of purchases in 2018?

Whatever the case, Jim Rickards is fond of reminding us that Russia’s gold stash as a percentage of its economy is the highest in the world — 5.6% of GDP.

Powerful insurance, he told us last year: “This combination of fewer Treasuries and more gold puts Russia on a path to full insulation from U.S. financial sanctions. Russia can settle its balance of payments obligations with gold shipments or gold sales and avoid U.S. asset freezes by not holding assets the U.S. can reach.”

And now a case of workplace theft that was brain-dead simple to track down.

The worker called state police, and state police called eBay for information about the seller going by the handle “ivie1254.” Sure enough, it belonged to another worker at the plant named Chad Morningstar. During 2019 alone, he’d sold $45,345 of goods.

Another relevant clue, it would seem: “Troopers say some of the photos for the items showed distinct markings and were taken in the plant,” reports the area’s NBC affiliate.

With that, they showed up at Morningstar’s home with a search warrant. They say they found $136,893 worth of goods, all from the plant.

“According to the [criminal] complaint,” says the TV station, “Morningstar said he was upset that Appvion had taken away his stock options and retirement.”

To the mailbag, and a remark about a Tesla owner’s unwanted upgrades…

“Reading about someone who didn’t realize he was paying $9,300 more than he should have for a car he was buying validates my suspicions about what kind of people buy Teslas.

“It also reminds me of an old Michigan saying — ‘A fool and his money are some party.’”

The 5: Heh… Your editor’s home base has been in Michigan for a while now, but that’s a new one on me. Makes sense, though, given how liquor stores here are called “party stores”!

P.S. We feel as if we should have something to say about the news that Amazon CEO Jeff Bezos’ smartphone was hacked, in all likelihood by operatives under the control of Saudi Arabia’s Crown Prince Mohammed bin Salman.

But it’s our long-standing policy to speak up only if we have something unique to bring to the discussion — “the story no one else is telling,” as Agora Financial executive publisher and 5 founder Addison Wiggin puts it. Or if we can be snarky about it, of course.

Failing to come up with something that meets either criteria, we shall follow the guidance attributed to the writer Robert Benchley: “Drawing on my fine command of the English language, I said nothing.”