The publication we pilloried recently for its refusal to cover Mike Bloomberg’s campaign for president got it all wrong. Imagine that, right?

Here’s Bloomberg’s retraction of an article on Jan. 15:

Bloomberg has retracted an incorrect article published today with the headline “Trump’s SALT Cap Fuels a Wealth Exodus From High-Tax States” because time frames in the Bank of America analysis on which the story was based were inaccurate. The underlying Internal Revenue Service data in the Bank of America report reflects income earned in 2017 and 2016 before the tax law took effect.

The retraction concludes: “To contact the editor responsible for this story [insert email address here]”… as Bloomberg slowly backs away.

Before the article’s retraction last week, we captured a graphic… 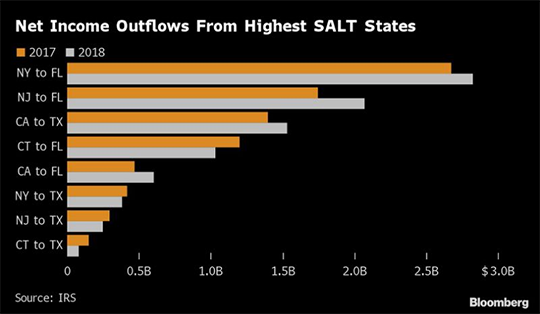 So Bloomberg goofed on the graph’s legend; the IRS stats really represent 2016 and 2017. The SALT cap didn’t really affect taxpayers until they filed in 2018.

So the Bloomberg graph still has some merit as Americans “took the money and ran” from high-tax states — for example, California — to low-tax shelters. To wit, a 5 reader says…

“Ah yes, another socialist workers’ paradise!” a reader says. He draws our attention to an article at Dallas Business Journal with the headline: “Study: 660 Companies Moving Facilities out of California With Many Bound for [Dallas-Fort Worth].”

According to the article: “The departures from the Golden State between January 2018 and [November 2019] involve corporate headquarters, manufacturing facilities, data centers, research hubs, software and engineering centers and a few warehouses,” per a study by Spectrum Location Solutions.

You don’t have to be a tax professional to key in on the prime mover. “Most of the municipalities in Texas are easier to get along with,” says business relocation expert Joe Vranich, “and that’s a benefit in addition to things like no income tax and an easier regulatory environment.”

California’s experienced an exodus that’s a stark reversal from its days as a Great Depression-era haven. “In the 1990s… more people moved out of the state than moved in,” says an article at The New York Times. 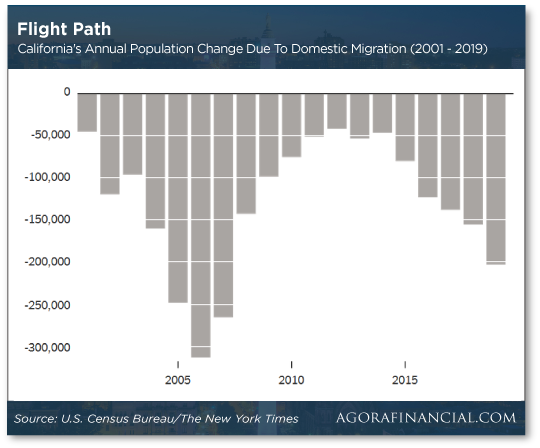 “For a few years, the trend seemed to be reversing, but with housing prices soaring and economies in nearby states humming, the losses started to pile up again.” In fact, between 2000 and 2009, 1.5 million California residents retreated from the state.

Looking at the chart, population attrition leveled off during some of the hardest years of the Great Recession. Then — presumably once Californians got back on their feet — residents split. And continue to do so in greater numbers.

One consequence: “For the first time, the state is expected to lose a seat in the House of Representatives.” Another consequence? On average — as of 2014 stats — Californians paid $17,148.35 in state and local taxes. So buh-bye to tax revenue, too.

“Not to worry, CA!” our cheeky contributor continues. “The People’s Socialist Thugocracy of Illinois, led by corrupt Chicago, is right behind ya!”

Our reader points out the Prairie State’s own population problem; according to data available from the U.S. Census Bureau, from 2018–2019 Illinois’ population declined by more than 51,000 people (second only to the Empire State).

Once again, you don’t have to be a Mensa member to connect the dots to high state taxes. The average SALT deduction for over one-third of Illinois’ tax filers was $12,877.51, according to 2014 stats.

Several reasons account for Illinois’ population plunge, though, including a falling birthrate, fewer international immigrants and an outflow of domestic migration.

Ken Johnson, a demographer at the University of New Hampshire, says: “The recession was an advantage to states like… Illinois because it held people in place. As soon as it [loosened] its grip, the domestic migration losses began to get bigger again.”

The New York Times says: “By 2014, the population growth turned negative and the losses were compounding. [Illinois] has lost nearly 2% of its population since 2013 and will most likely lose a House seat as a result.”

The NYT reports: “Population loss directly affects political representation. Seats in the House of Representatives and the Electoral College are tied to the decennial census.

On the other hand: “Arizona, Colorado, Montana, North Carolina and Oregon would each get one new seat, while Florida (three) and Texas (three) would divide the remaining five seats.” Which mostly jibes with the fact that Americans are migrating to low-tax states in the south and west.

As the redistribution of the U.S. population shifts political power, it also shifts economic power. “Companies… relocate or look elsewhere to expand, making it harder for local governments to raise taxes to pay for services like education, which in turn prompts more people to move away.”

We’ll continue to keep you posted on the effects of domestic migration — particularly in light of the TCJA’s SALT cap — which, by the way, expires in 2025. Watch what happens next…

The IMF adjusted its 2020 forecast for global GDP microscopically yesterday — from 3.4% to 3.3%. Something that the Financial Times reports is a real downer for global power brokers meeting in Davos…

“Zoh-my-god! The IMF cut its growth forecast by a tenth of a percentage point! We have to change up the entire conference program!”

For more on the price of oil…

“Changes to shipping fuel rules mean that a few select grades of crude have risen back toward [the $100] level, even as the majority of barrels still change hands far closer to $65,” the Financial Times reports.

Basically, until that time, ships operated using high-sulfur residual fuel oil. It’s a byproduct of refining oil for other uses — essentially what’s left in the barrel after everything else has been made.

And it’s the dirtiest, most-viscous oil available; as you might imagine, it’s terrible for the environment, releasing sulfur dioxide into the air.

In 2016, the International Maritime Organization (IMO) — a U.N. agency — banned any fuel with a sulfur content greater than 0.5%. The rule officially went into effect on New Year’s Day this year.

“In response to the shift, a growing proportion of the global shipping fleet now burns fuel closer in profile to the diesel used in cars than the sulphur-rich sludge favoured before,” the FT says.

Some of the biggest winners in the shipping industry? “Ship owners who moved to install so-called ‘scrubbers’ ahead of schedule.”

That’s something our income specialist Zach Scheidt brought to our attention last fall: “Instead of getting ready to start using new fuel, some ships have installed ‘scrubbers’ on their ships,” he said at the time. “These devices remove pollution from a ship’s exhaust… including sulfur.”

According to the FT: “Shares in Frontline, one of the world’s largest tanker companies, which has fitted scrubbers to much of its fleet, have more than doubled in the past year, boosted in part by the benefits it is now reaping from lower fuel costs.”

And the world’s largest cruise line — Carnival Corp. — spent more than $500 million to retrofit its fleet with “scrubber” devices ahead of the Jan. 1 deadline.

What’s next for the shipping industry? “On the horizon… is a broader environmental pushback against oil, forcing a wider rethink about how ships are powered,” FT says.

In the meantime: “Expect further mini-spikes for specific fuels as the industry shifts.”

“Shares in Chinese drugmakers have risen sharply as concerns grow over a new virus spreading across the country,” the BBC says.

“Jiangsu Sihuan Bioengineering, Shandong Lukang Pharmaceutical and Hengrui Medicine were among the drugmakers that gained 10%.”

This after a new strain of coronavirus was discovered in the Wuhan province of China. A variant of the SARS virus that killed almost 800 people in the early aughts, this new virus causes symptoms similar to pneumonia.

According to the BBC, the number of cases tripled over the weekend with the virus spreading beyond China into Japan, Thailand and South Korea.

And timing’s everything: “Millions of Chinese people are preparing to travel both within the country and abroad for the New Year holidays.”

In other words, investors are going long face mask manufacturers — for reals — and short Chinese airline and hotel stocks.

We hesitate to share this after the aforementioned… but what the hay! “Sweethearts, the conversation heart candy, is back on shelves for Valentine’s Day after missing a year because of a change in its ownership,” CNBC says.

And in an issue that’s chock-a-block with 5 updates, we reported on the sad demise of candy maker Necco in July 2018. For that reason, the heart-shaped candies weren’t on store shelves (at least, not fresh candies) last Valentine’s Day.

Spangler Candy bought the brand and, according to CNBC, is rolling out a new version of Sweethearts with pithier sayings and a slightly different flavor… 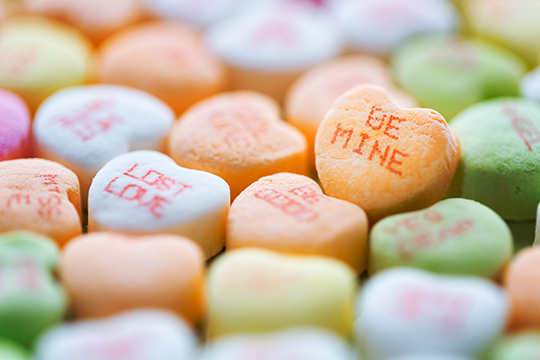 And some of the candy hearts will just be blank — yep, BLANK.

That’s because transferring 60 truckloads of equipment from Necco’s closed factory in Massachusetts to Spangler’s factory in Ohio proved to be a yearlong logistical nightmare. And some of the printing equipment got damaged in the process.

“Although fewer Sweethearts will come with the sayings that they are known for, Spangler is bringing the candy back to its roots by reviving the original recipe.

“The company located the formula buried in paperwork,” CNBC says. “The change brings back flavors such as banana and wintergreen.”

Well, in case Spangler Candy wants to update its sayings, we have a couple suggestions. How about “Swipe Right” or “Slide Into My DMs” (not as titillating as it sounds)?

P.S. A radical trading breakthrough is revolutionizing the way readers are making money, giving them the chance to collect thousands of dollars every month.

Imagine that much extra income… How fast would it take you to grow a small stake into the retirement of your dreams? Three months? Six? A year?

One thing’s clear: You’ve never seen a way to make money this quickly, and — for reasons you’ll see — we’re taking this down at MIDNIGHT. (In other words, you need to act quickly.)

This is your chance to see how to turn a small trading account into a fortune… Click here to see how it works.