Parenting tip from our income specialist Zach Scheidt: An older electric car is a great way to keep a tight rein on the teenage drivers in your house.

“Years ago when my first daughter started driving, I bought a Nissan Leaf,” he tells us. “I originally bought the vehicle so she wouldn’t have to buy gas every week. I figured she could park the car in the garage, charge it every night and start with a full charge before school every day.”

But soon Zach discovered another, umm, benefit — the Leaf’s limited range on a single charge. About 80 miles.

“That’s enough to get to and from school, to sports practice after school, but not enough range to get too far from home. I like knowing that if the girls want to drive farther away, they need to check in and possibly switch cars with me for longer trips.”

Fast-forward to last weekend, and Zach’s 15-year-old asked, “Are you going to buy me an electric car when I get my license? Maybe a Tesla?”

“If anyone in this family gets to drive a Tesla, it’s going to be me!” was his reply. “But it’s definitely possible that we’ll have another electric car when you’re ready to get your license.”

Funny thing, that question came the day after he flew home from the Consumer Electronics Show in Las Vegas — where, amid all the eye-catching gadgetry, he was struck most by the advances in electric vehicle technology.

“I was impressed by all of the different carmakers that are quickly adding new electric models for consumers to choose from,” Zach says.

“Below are just a few pictures I took. Including: 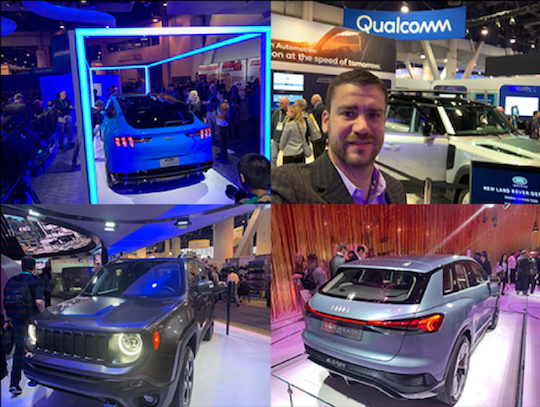 Not only that but Zach informs us GM is reviving its Hummer nameplate — not for a new gas guzzler, but for an electric vehicle.

“All together, I learned that by the end of this year, there should be more than 150 different electric vehicle models for consumers to choose from.” The ranges on a single charge are growing, too — up to 375 miles if you shell out for a high-capacity battery package.

“And that’s great news not just for your driving pleasure, but also for your investment returns!” he adds.

How to play it? Well, as a value and income guy, Zach is not a fan of Tesla Inc. Yes, TSLA is on a roll lately, up 90% in three months. Earlier in the 2010s, some of our readers managed to make 10 times their money on TSLA shares.

“But TSLA also has a history of violent swings and disappointing execution,” Zach reminds us. “I’m still worried that the stock price could pull back sharply as competition picks up and investors start paying attention to the lack of profitability.

“On the other hand, as traditional auto manufacturers join the electric vehicle revolution, investors will have some tremendous opportunities to book profits!

Yes, we too are struck by the irony. Zach goes to the premier technology-industry extravaganza… and comes away liking Detroit’s Big Three automakers the best.

But hear him out, especially on two of those three names: “Ford and GM both pay excellent dividends. Ford’s yield is currently close to 6.5%, while GM pays us 4.3% to hold our shares.

“Both of these are well above the average yield for most blue chip stocks, and both of these companies stand to benefit from consumers who have money to spend in 2020 and from new technologies (including electric motors and autonomous driving).”

It’s an easy call, Zach says — easier than deciding which model of electric vehicle to get his 15-year-old later this year. Heh…

The major U.S. stock indexes are inching further into record territory as the week winds down. The gains are meager, but they’re gains nonetheless. As we write, the Dow has crossed the 29,300 mark. The S&P 500 and the Nasdaq are also in the green, however slightly.

And with that, Google parent Alphabet has entered the elite club of companies with a market cap of $1 trillion or more, joining Apple, Microsoft and Amazon. (Once again, a hat tip to the alert reader who noticed a few days ago that put together, the four companies comprise the “MAGA” stocks.)

Earnings season is taking a breather, as it typically does on a Friday, but there’s no shortage of economic numbers for traders to chew on…

Of more concern is the “cap ute,” or capacity-utilization, number — a measure of how fully industrial companies are using their resources. It’s a basic barometer of economic health.

In December, 77% of the nation’s industrial capacity — factories, mines, oil rigs, utilities — was in use. The number declined steadily throughout 2019… 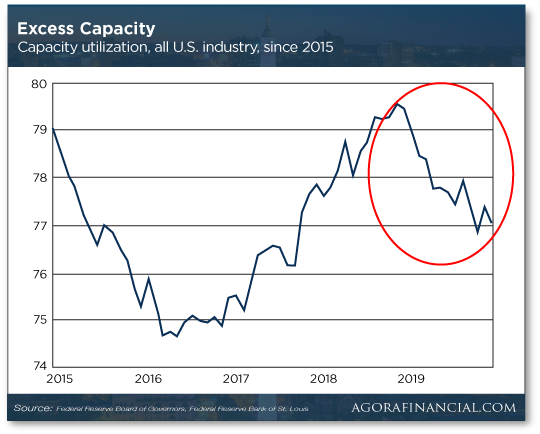 But we’re showing you a five-year chart for a reason: You can see how there was a far bigger and steeper dip in 2015… which reversed in 2016.

Now a 5 flashback: The outlines of the “phase one” trade deal look very much like what our macro maven Jim Rickards told us they would — nearly two years ago.

As the trade war was getting underway in earnest, your editor shot an email Jim’s way with a simple question: What would a U.S. victory look like?

Among those three possibilities, Jim said, “No. 3 is easiest and most likely because it does not require any changes in Chinese policy. They just move the order book for soybeans from Canada to Kansas. The U.S. trade deficit goes down (even if their deficit with Canada goes up; too bad).”

And so it is. Perhaps the highlight of the agreement is Article 6.2, Paragraph 1…

“During the two-year period from Jan. 1, 2020, through Dec. 31, 2021, China shall ensure that purchases and imports into China from the United States of the manufactured goods, agricultural goods, energy products and services identified in Annex 6.1 exceed the corresponding 2017 baseline amount by no less than $200 billion.”

Of course, as we suggested earlier this week, the devil is in the details.

“Given that U.S. exports to China in 2017 were about $180 billion, an additional $200 billion over two years would be a massive increase,” write Simon Lester and Huan Zhu of the Cato Institute.

“How exactly will China quickly ramp up its purchases? What is the role of the government in this shopping spree? What domestic process will the Chinese government use to induce companies to make these purchases? Are there accounting tricks they can rely on (e.g., reclassifying current Hong Kong imports as Chinese imports)?”

Oh, and this: “Can U.S. producers scale up production to meet these targets?”

To which we’ll add: What incentive do U.S. producers have to scale up if there’s no guarantee they’ll still have a buyer beyond 2021?

As long as we brought up Tesla today… it seems the company is taking “butt-dialing” to new and outrageous and very costly heights.

Tesla owner Jon McLaughlin got a call from his wife recently; she’d noticed a few self-driving features were suddenly available on the couple’s Model 3. Neither of them had authorized those upgrades.

“This prompted me to look at the ‘upgrades’ section of the mobile app,” McLaughlin tells the Elektrek website. “Interestingly, the app said I had purchased all the eligible upgrades. Odd, I haven’t purchased anything. So I proceed to click on ‘purchases’ within the mobile app only to see two invoices. One for the new performance boost and the other for FSD [full self-driving].”

Total cost of the upgrades McLaughlin never authorized: $9,700. Even for mostly well-heeled Tesla drivers, that puts a dent in the monthly budget.

According to the Canadian website Driving, “Tesla introduced one-click ordering in December, and the first feature available via the easy-buy feature was the Acceleration Boost upgrade.

“The Tesla app reportedly doesn’t always have prompts asking you to confirm the purchase; instead, it’s possible to accidentally tap one of the products and have the purchase confirmed without intending to do so… Since then, several Tesla owners have reported ‘accidentally buying’ thousands of dollars of software upgrades they didn’t want and having trouble getting refunds for them from the company.”

Among those customers, it seems, is a well-known author in the field of finance with a busy (and sometimes salty) Twitter account… 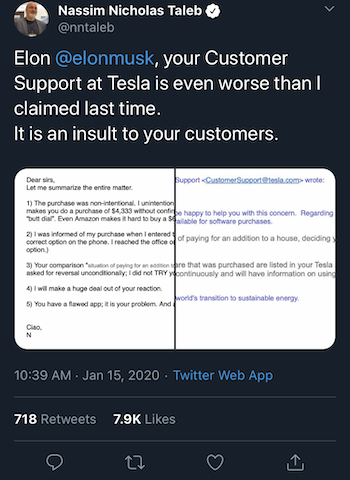 Replied Tesla honcho Elon Musk, “Tesla refunds in general should be easy to get electronically and certainly through customer service. Will he addressed [sic].”

“Hopefully,” says Elektrek, “everyone affected can quickly get a refund now that Elon has commented on it on Twitter, which seems to be the main customer service arm at Tesla these days.”

“Gold went up too far, too fast!?! What about the stock market!?!” a reader writes after we made a remark in passing earlier this week.

“It’s insane how fast stocks are moving up!! It’s not even realistic! Fantasy world!!! Gold and silver ought to be doubling and tripling!! As far as the financial markets, this is the scariest I’ve ever seen it in my 62 years!! FAKE, FAKE, FAKE!!!”

The 5: Careful there. “Ought to” is right up there with “should” as the most dangerous words in all of finance.

Five years ago, we coined the term “just-world investing.” In a just world back then, the markets would have been mercilessly punishing Uncle Sam for allowing the national debt to cross the $18 trillion mark… and the rate on 10-year U.S. Treasury debt would have been far higher than the 2.29% of that time.

But it wasn’t a just world. Hell, it’s even less just now. Five years later, the national debt is over $23 trillion… and as we check our screens this morning the yield on a 10-year T-note is even lower at 1.85%.

The markets and the economy would be a lot easier to analyze if we lived in a just world. Yes, stocks would be far cheaper and gold priced in dollars would be far higher. The “perma-bears” that prowl the investing landscape would have been proven right a long time ago. God knows TSLA wouldn’t have grown 10-fold in the space of a few years.

Point being, you can’t afford to invest as if it’s a just world — unless you’ve already amassed a fortune and you’re extremely patient about growing it further. Very few of our readers are lucky enough to be in that position; they can read our output for sheer entertainment value.

It’s everyone else we’re primarily looking out for when our gurus and analysts put their shoulder to the wheel each day. And if it’s a Bizarro World we’re living in, that’s the world they’ll try to make sense of on your behalf.

Protests and riots will be “the new normal” in 2020, affecting almost 40% of the world’s countries, according to a new report. No surprise to our Jim Rickards.

“The impact of this election cycle on markets will be profound. The stakes for investors have never been higher,” says Jim Rickards.

Why grow cannabis in high-tax California when you can grow year-round in Colombia’s optimal conditions for less? Ray Blanco reports…

Have You Had Your Alpha Waves Today?

Science might be about to uncover a cause-and-effect link between sunspots and human conflict — wars, uprisings, revolutions and so on.