Ray says so with full awareness of the bloodbath many names in the sector suffered in 2019. Check out the North American Marijuana Index, made up of the leading U.S. and Canadian cannabis stocks… 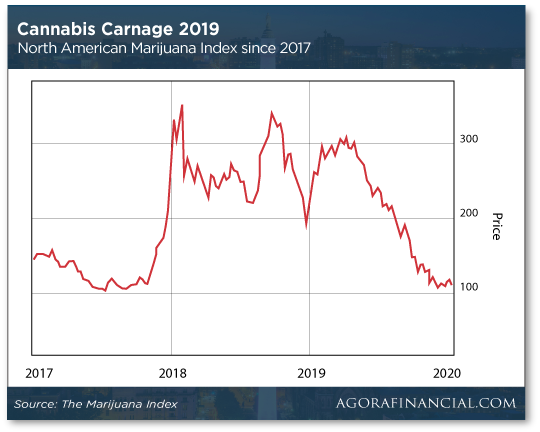 Ray’s bullish 2020 outlook comes with the credibility of having sounded an early alarm about the 2019 shakeout.

Here’s what he said in The 5 on Jan. 16, 2019: “In the past few years, cannabis has been a relatively hot area. Any company that launched in late 2016 and said that they were going to grow legal weed found no shortage of funding — whether or not their business plan was real or practical.

“Now in 2019, the irony is that the businesses are probably more real than ever (thanks to the regulatory doors opening around the world), but capital is more scarce thanks to a market that's got investors spooked. Odds are we'll see some of the pot stocks with flimsier financials fail this year.”

Ray even drew parallels between pot stocks in 2019 and dot-com stocks in 2000. “It's normal to see leaders take the reins as an industry matures,” he says. “Amazon.com survived the dot-com bubble — Pets.com (and scores more) didn't.”

And sure enough, 2019 brought the first publicly traded cannabis company to declare bankruptcy.

But here’s the thing: “Even though last year was tough for cannabis stocks, it was actually spectacular for cannabis companies in many ways,” Ray says.

And 2020 is bringing new catalysts: In his State of the State address this week, New York Gov. Andrew Cuomo pledged to get legalization done before year-end.

So here’s Ray’s state of the industry: “It’s fairly uncommon to see such a big disconnect between stocks and the firms they represent. But it happens. And when it does, it often represents a massive opportunity.

“The biggest problem in 2019 was the fact that investors treated all pot stocks the same. Fact is, there’s a huge disparity between the best and worst operators in this growing industry.”

A shakeout is healthy. “The worst-run companies deserve to go bust. And when that happens, we’ll see investors start to get more comfortable putting money behind the real businesses again.”

And there’s evidence that’s already happening: “While some cannabis industry laggards continued to make new lows in the final quarter of 2019, the leaders have begun to separate from the pack.”

So it’s not a bad time to buy the sector as a whole, using an ETF like the ETFMG Alternative Harvest ETF (MJ). But for truly life-changing gains in 2020, Ray directs your attention to three names he describes as dirt-cheap — handing you a chance at a “Day One jackpot.” Details here — no long video to watch.

The monthly job numbers are “meh” and so is the market’s reaction.

The wonks at the Bureau of Labor Statistics conjured 145,000 new jobs for the month of December. That’s just enough to keep up with population growth… but it’s less than the “expert consensus” of economists was looking for.

The rest of the numbers were likewise so-so. The average workweek came in a bit lower than expected, while growth in average hourly earnings is now the slowest in 18 months.

Mainstream chatter the last year about a “super-strong job market” has given way to this assessment from Econoday this morning: “High levels of employment still have yet to trigger increasing wage pressure in what is the great puzzle of this expansion and one possibly tied, perhaps, to lack of collective power in the labor force where people are just happy to have jobs.”

ShadowStats includes all the part-timers who’d like to work full time (hello, Uber drivers)… plus all the people who’ve given up looking for work over the years and are no longer considered part of the workforce.

As we go to virtual press, we’re still awaiting the ShadowStats number for December; the November real-world unemployment rate was 20.9%, equaling a 10-year low.

Nothing can squeeze a reaction from traders today — not even Boeing trying to get ahead of more bad news by releasing internal emails about the 737 Max in which employees say things like, “This airplane is designed by clowns, who in turn are supervised by monkeys.”

Go figure, BA shares are down only half a percent on the day.

For the record: The Federal Reserve’s balance sheet has swelled by 10% since the “repo rescue” began in mid-September.

As we chronicled at the time, the market in “repurchase agreements” seized up four months ago. These are the overnight loans Wall Street firms and hedge funds take out with each other to finance their daily trading. They’re a basic lubricant of the financial system.

For reasons that remain opaque, repo interest rates went haywire during the third week of September — skyrocketing from 2% to 10%. Repo rates are supposed to stay in line with the Fed’s benchmark fed funds rate; if they don’t, it looks as if the Fed has lost control of the system.

So over the last four months, the Fed has jumped in to offer repo loans to the tune of about $215 billion a day. Yes, those loans get paid back… but the Fed is also buying Treasury bills to keep the repo market shored up… and that’s blowing up the Fed’s balance sheet at a pace last seen during the Panic of 2008. 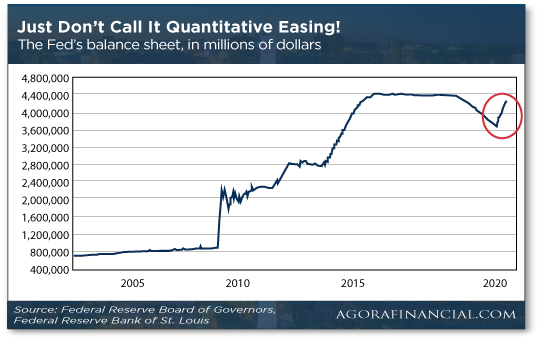 And we still don’t know who’s benefiting from this bailout or why they need it. The website Wall Street on Parade has filed Freedom of Information Act requests with the New York Fed. The New York Fed keeps blowing off those requests, with another deadline missed yesterday.

One thing is certain: All that liquidity is finding its way into the stock market — as happened during previous instances of the Fed expanding its balance sheet. The market’s been rallying nearly nonstop since early October, about two weeks after the repo rescue began.

It won’t take a geopolitical scare to give oil prices another lift, says our investment banking veteran Nomi Prins.

A barrel of West Texas Intermediate is back below $60 this morning — right where it was before a U.S. drone killed Iranian Gen. Qasem Soleimani. If you blinked, you missed the jump past $65.

But going deeper into 2020, “supply and demand should be the key drivers of oil prices,” says Nomi. “JPMorgan raised its 2020 oil price forecasts, as it expects OPEC’s production cuts to be effective as well as on expectations for better economic growth in emerging-market countries.” Goldman Sachs says more or less the same thing. Nomi finds those forecasts credible.

“The trend in central bank easing globally will bolster oil prices too,” she adds.

And if events heat up in the Middle East again? That will only tighten the supply-demand balance, Nomi says. “In summary, if U.S. oil supplies shrink relative to demand and geopolitical tensions rise, there could be higher oil prices in the near term.”

The 7-Eleven chain is everywhere in Japan. “They might be the only place in the world,” Vice tells us, “where you can pick up a baseball ticket, pay your utility bills, get a SIM card and buy a limited-edition bottle of single-malt whisky all in one go.”

Not so at the store run by Mitoshi Matsumoto in the city of Higashi-Osaka. “In his store, the shelves are mostly empty, and there are handwritten ‘30% Off’ signs taped on what's left. Fresh food is no longer being delivered, the ATM has stopped working and the employees have to make sales on a portable cash register because their computer systems have all been disconnected.”

According to a New York Times account, Matsumoto bought the franchise in 2012. By last year he was working 14-hour days and having a miserable time finding any help. So he announced the location would no longer be 24/7, closing from 1:00–6:00 a.m.

Alas, that’s a violation of 7-Eleven’s contract. Thus began a months-long legal dispute climaxing at year-end with his decision to close for the New Year’s Day holiday… and 7-Eleven terminating the contract. 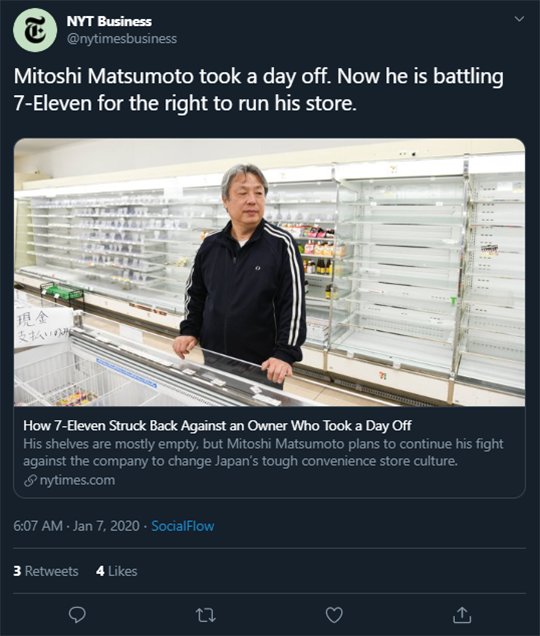 With both limited inventory and staff, the hours are now 9:00 a.m.-5:00 p.m. “I still think this is 7-Eleven,” he tells SoraNews24. ‘Basically, we’re just selling off the stock until the dispute is settled.”

But a settlement wouldn’t resolve what he sees as the bigger problem: “The system is broken because the companies are taking too much from the people running the stores, and there isn’t enough left to run them properly.”

To the mailbag: “In regard to the reader wondering if the assassination of Soleimani was carried out by rogue elements in the national security complex, I believe he’s not far from the truth.

“Remember how Eisenhower ordered the CIA to stop the U-2 flights over Russia in preparation for a summit with Khrushchev? Dulles ignored those orders, which led to Francis Gary Powers getting shot down, thus putting the kibosh on any peace talks. I never understood why Ike didn’t fire the arrogant bastard until I saw what happened to JFK for his attempt to rein in the CIA.”

The 5: A few weeks ago, we chronicled 70-plus years of the national security state defying elected presidents… an episode of The 5 in which the U-2 incident makes a cameo.

“Coincidence? I think not,” says our final reader correspondence for the week.

“You all at The 5 probably saw this years ago, but I’m a little slow sometimes. I just noticed an eerie familiarity in the acronym for Microsoft, Amazon, Google and Apple when reading yesterday’s missive.”

The 5: Actually, it took you to bring it to our attention.

Of course, most of the Wall Street buzz surrounds either FANG or FAANG. But Netflix isn’t in the same league as the others if you’re going by market cap.

We’ve mentioned for several years how Microsoft is right up there with Apple, Google, Amazon and Facebook as the “Big 5” U.S. stocks. But at No. 5, Facebook is far behind the top four, with a market cap just shy of $600 billion… while the others are all at least $900 billion.

So yes, that leaves you with a Trumpian acronym — ironic given the love-hate relationship he has with each of those companies…

P.S. What if you could get in on a red-hot cannabis company before it’s offered on Wall Street?

Well, sit tight and check out what our penny pot stock authority Ray Blanco has to say right here. You just might be blown away.