Path of Least Resistance (and Your Portfolio)

“It can’t hurt to begin planning our investment themes for the next 365 days,” says Agora analyst and chart hound Greg Guenthner. This as we turn the page on 2019 — and a decade — and ring in 2020… Happy New Year, y’all!

In terms of the market, Greg points out how we’re entering the new year with thrusters fully engaged (to borrow a Star Trek metaphor); indeed, a far cry from last year when the Christmas Eve rout of 2018 had investors saying: “Engage force fields.”

“But that doesn’t mean investors are feeling particularly bullish about the stock market right now,” Greg says. “According to data compiled by The Wall Street Journal, investors pulled $135.5 billion from mutual funds and ETFs [in 2019]… the biggest withdrawals since data collection began in 1992.

“Is all this worry warranted?” Greg says. “Is a recession or market crash just around the corner?”

To answer that, Greg zooms out to take stock of the last decade, including what the financial media hail as the longest bull market in history. To Greg’s way of thinking, that’s a smidge reductionist…

Greg continues: “We’re to disregard the massive losses in small caps, biotechs and emerging markets. The S&P only dropped 15% peak to trough. No big deal, right?”

Which brings us to 2018: “The Nasdaq Composite cratered 22% in less than three months. In fact, thanks in part to a pair of hard resets in 2018, the major averages went almost nowhere for the better part of… two years. 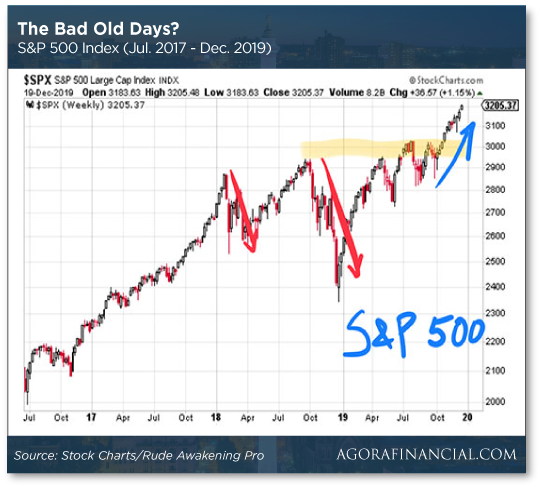 All of which leads to Greg’s first prediction for 2020: “We’re closer to a new bull run than a market meltdown,” he says. Say what?

“Yes, stocks are a little overextended right now and will have to pull back at some point,” says Greg. “But thinking of this price action as the end of a major move — instead of the beginning — would be foolish.

“Until something changes, the path of least resistance is higher,” he concludes.

Greg’s second prediction for the new year? “Amazon.com (NASDAQ:AMZN) will get its groove back.”

Sure, the company saw record-breaking sales for its annual Amazon Prime Day event and is still undoubtedly Americans’ No. 1 e-commerce shop… but Amazon lost a step in 2019.

“Speaking of Microsoft, its stock continues to dominate as Azure grows. MSFT shares are up 55%,” Greg notes. “This performance puts the Amazon growth machine to shame.

“That’s right — Amazon shares are up a paltry 19%. The stock remains more than 10% off its July highs as it lags its big tech peers heading into 2020,” says Greg. 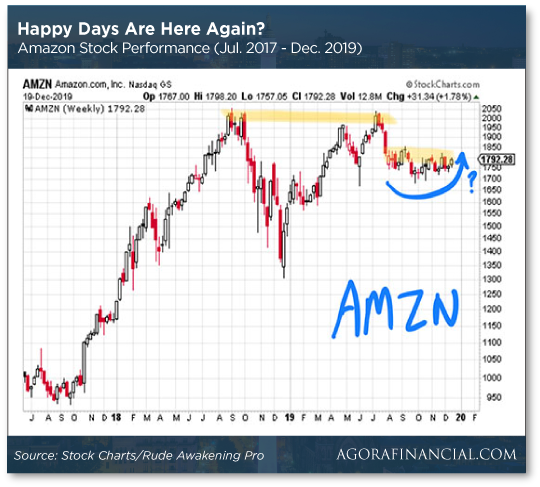 “Right now the stock reminds me of how it was setting up in late 2014 after the disastrous launch of the Prime smartphone,” he continues. (Remember that? Neither do we.)

“Shares were in a rut and down on the year, analysts were getting bearish and everyone was trying to guess when the music would stop.

“But Amazon promptly broke out in January [2015],” says Greg. “By the end of the third quarter, shares had doubled off their lows.”

Looking at the chart, Greg says: “We’re starting to see similar bottoming action… as Amazon begins to work out of a five-month base.”

Greg’s takeaway: “Don’t let the recent weakness fool you. Amazon could quickly snap out of its funk after the holidays and post one of its biggest rallies since its 2015 breakout.”

For a third prediction, Greg blows the cobwebs off a shelved asset class and says: “The emerging-markets breakout accelerates.

“The iShares MSCI Emerging Markets ETF (NYSE:EEM) is still lagging the S&P 500 year to date,” says Greg. “But its gains… pushed to new 2019 highs in [December]. 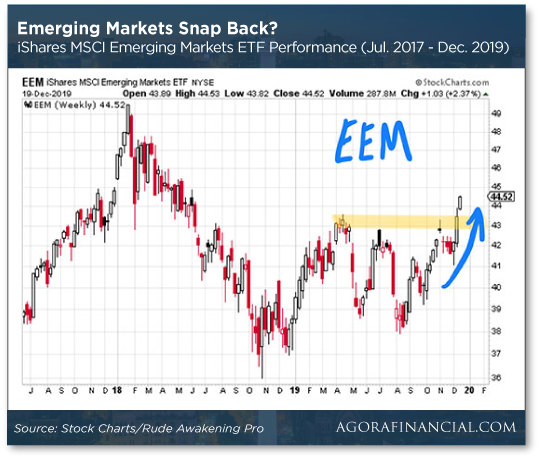 “One of the most compelling aspects of this year’s market rally is the broad participation we’re seeing from markets across the globe,” he says. Greg’s talking European, Asian and developing markets — all breaking through long-term resistance — in spite of bearish trade war headlines from financial media outlets in 2019.

Greg says: “As we kick off the new decade, 2020 could finally be the year where emerging markets outperform the U.S., giving globally diversified investors one of their first major victories in a long time.”

[Ed. note: Greg is upping his trading game in a whole new way in 2020… and a select group of readers already has access.

To make sure we’ve got all the bugs worked out before we “go live,” watch this space for more information on Greg’s new service in the coming weeks.]

Oh, boy! The generic “broker” pasted onto financial media headlines is smiling; in fact, he’s downright euphoric… Here’s the associated headline at CNBC: “‘First Five Days’ Indicator, Which Has a Good Track Record at Predicting Year, off to Good Start.”

According to Stock Trader’s Almanac, when stocks close up the first five days of trading in a given year, the S&P 500 has seen positive returns over 80% of the time, with an average annual return of about 13%.

But the CNBC article’s quick to point out: “Still, a lot can happen the rest of the year, and its predictive ability could just be coincidental given that stocks rise most years.”

Wall Street’s a superstitious bunch, are they not? (We wonder if traders adhere to rituals the same way sports stars do — unwashed socks and more.)

Spotlighting the price of gold, we check out the yellow metal’s price during pre-holiday trading when it was $1,478.80 per ounce on Dec. 20 — that’s a gain of 1% as of today.

Can a jump of that magnitude — that took place amid thin holiday trading — hold once all the trading desks are back to full strength next week? Be interesting to see…

Germany is cracking down on gold buyers with alarming new legislation that went into effect Jan. 1, 2020.

In late December, precious metals consultant and analyst Dan Popescu tweeted a picture of a long line of people waiting to buy gold in Germany… 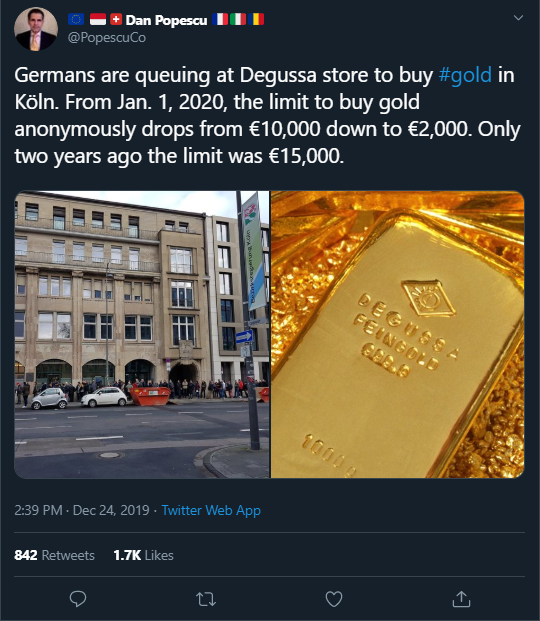 Did you catch that? It’s not that the German government’s put the kibosh on buying more than 2,000 euros worth of gold (or $2,236.64 worth today) — Germans just won’t be able to do so anonymously.

Instead, the New Year’s resolution requires gold sellers to register and perform a background check on anyone who wants to buy gold over the paltry new limit; if traders fail to do so, they’ll face significant fines.

(Huh… Before you know it, Germans who want to buy gold might have to run the gauntlet their government requires for gun ownership. Not even kidding.)

The new gold rule is part of wider EU legislation that takes effect Jan. 10 — the anti-money laundering directive, or AMLD5, is the Union’s fifth attempt to quash funding terrorism (or so says the European Central Bank).

“Per the legislation, nontransparent assets, accounts and even private safety-deposit boxes will now be subject to state information gathering by law. Gold is a bastion for private value storage, so the stricter limits come as no surprise.”

The article concludes: “Given the state of economic affairs in the EU, skeptics maintain the new laws are part of a larger bid to establish financial control and force users to remain stuck in a faltering system.”

According to an article at The New York Times, the FDA will bring the ban hammer down on all flavors of Juul cartridges except tobacco and menthol. (Apparently, the “cooler” menthol flavor first introduced by Spud cigarettes in the 1920s isn’t popular with the underage set.)

E-cigarettes that use refillable liquids will have no such flavor restrictions.

“That compromise represents a significant recalibration of a proposed policy that provoked intense opposition from adult consumers and the vaping industry,” Reason reports, “including thousands of small businesses across the country.”

As you can imagine, Trump’s walking a fine line here — between public perception and a powerful industry “inclined to support the president,” says Reason. All-out bans might disenfranchise voters, “potentially threatening his reelection.”

Gregory Conley, president of the American Vaping Association, didn’t mince words: “Our next focus will be on ensuring that the Trump administration recognizes the need to reform the FDA’s regulatory system for these products.

“If President Trump wants to win in 2020,” Mr. Conley continues, “mere inaction on this issue is not enough.”

“Dear 5 Min. Forecast,” a reader says. “Why have you cut me off your mailing list? I have not received any this week.”

The 5: We would never intentionally leave you out of our daily missives.

“I am a subscriber to The 5 Min. Forecast, but I have not received your daily email since Saturday, Dec. 14,” says another reader.

“Please fix this problem and let me know how I can read the daily emails that I have missed since then. Thanks.”

The 5: We’re delighted you’re so passionate about our newsletter. You can always check out our website here. At the website, you can scroll through The 5’s voluminous archive.

The 5: Indeed, we can. We looked into why some readers weren’t getting our daily issues.

Here’s what we found: According to our crack email team, in mid-December we experienced an entire IP block that affected a few Agora publications. While the “Big 4” (Gmail, Yahoo, AOL, Outlook) were largely unaffected, smaller email clients (Comcast, EarthLink, etc.) experienced some filtering issues.

The issues are being resolved, with about 5% of our email list still affected.

Apologies for the inconvenience; The 5 should be up and running for all our readers soon.

P.S. We’ll be taking the wraps off Greg’s new service in just a few weeks… What makes it so unique?

Readers will get Greg’s live commentary on the market right as it opens, giving subscribers an expert’s up-to-the-minute take on market trends.

What’s more, it’s not just a one-way conversation: Greg will be answering readers’ questions too — something standard newsletters just can’t do.