Imagine this: You’re the CEO of an American multinational corporation employing 4,000 people worldwide.

You’re on the verge of completing a complex years-long project involving partners in Germany and Russia.

Suddenly you get a letter from two Swiss lawmakers telling you to drop the project or else “risk putting your company out of business forever.”

You probably laugh it off, make a paper airplane from the letter and aim it at the circular file, right?

OK, now swap “American” and “Swiss” in our scenario… and you get a completely different outcome.

We return this morning, however reluctantly, to the topic of financial warfare and de-dollarization.

When we last visited the topic five days ago, Congress had approved sanctions on anyone providing “vessels for the installation of deep-sea pipeline for the Nord Stream 2 project.” 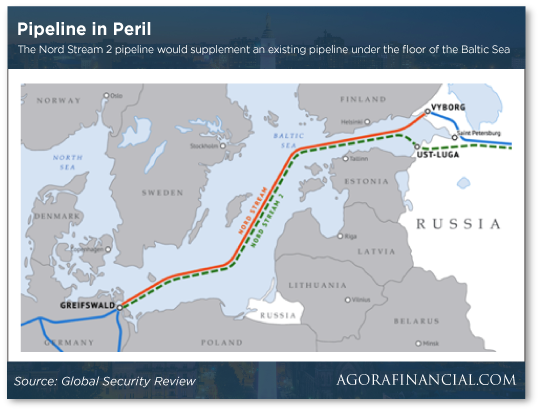 Among the major contractors on Nord Stream 2 is a Swiss firm called Allseas.

“You face a binary choice,” they wrote: “stop NOW, and leave the pipeline unfinished (the express intention of the sanctions legislation, which we authored), or make a foolish attempt to rush to complete the pipeline and risk putting your company out of business forever.” [Emphasis ours.]

With that, Allseas has suspended its Nord Stream 2 operations. The firm has laid about 1,300 miles of pipeline to date — with less than 200 remaining.

Trump’s ambassador to Germany, Richard Grenell, is pleased with the outcome — pointing out the Trump policy is consistent with Barack Obama’s.

“The U.S. policy is for European diversification and making sure that there are multiple sources [of energy].” As he tells it, Washington aims to prevent a situation in which “one country or source has the ability to create undue leverage over Europe.”

Why it’s any of Washington’s business where Europeans choose to get their energy, he did not say.

But when you’ve got the globe’s reserve currency, you don’t have to explain.

“The international reach of U.S. sanctions makes the U.S. the economic policeman of the planet, and that is not acceptable,” said French finance minister Bruno Le Maire in May of last year — when Washington reimposed sanctions on Iran.

For now, Washington has that kind of leverage because the U.S. dollar is so dominant in global finance. The dollar makes up 60% of global currency reserves… 80% of global payments… and almost 100% of the energy market.

But for how long? European leaders have made halting attempts at a nondollar payment system to keep doing business with Iran.

They haven’t had much success… but the Nord Stream 2 sanctions can only push them to keep developing alternatives. For the Germans, it’s way more important to wean their electric grid off coal and nuclear than it is to please politicos in D.C.

While “de-dollarizing” is a challenge for Europe, it might be more manageable for Muslim countries already groaning under the weight of sanctions.

Over the weekend, Malaysia’s 94-year-old prime minister Mahathir Mohamad hosted a summit of Islamic nations. Mohamad is already famous in financial circles for staring down George Soros and the International Monetary Fund during the “Asian contagion” crisis of 1997. (Long story — you can Google it if we’ve piqued your interest.)

Nearly a generation later, Mohamad might be about to shake things up again. “I have suggested that we revisit the idea of trading using the gold dinar and barter trade among us,” he said at the end of the summit. “We are seriously looking into this and we hope that we will be able to find a mechanism to put it into effect.”

Mohamad praised Iranian president Hassan Rouhani for how his country is withstanding sanctions. Also in attendance — Turkey’s president Recep Tayyip Erdoğan, whose nation is under growing threat of U.S. sanctions. 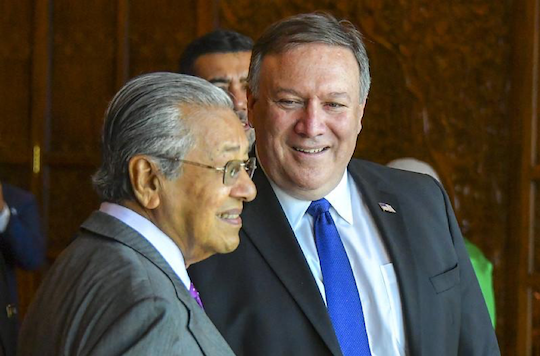 “With the world witnessing nations making unilateral decisions to impose such punitive measures, Malaysia and other nations must always bear in mind that it can be imposed on any of us,” said Mohamad.

We can’t help wondering if our own Jim Rickards put the thought in Mohamad’s head.

“Several years ago,” Jim wrote his readers earlier this year, “I had the honor of joining Mahathir Mohamad and a small group to celebrate his 90th birthday at a restaurant in the Malaysian capital of Kuala Lumpur.”

At the time, Mohamad was out of power — but he still had what Jim describes as a “keen interest in the international monetary system and his search for some alternative to the current system, dominated by the U.S. dollar.”

Fast-forward to this year and Jim describes a “Malaysia Plan” in a section of his latest book, Aftermath. “That section describes a gold standard for countries like Malaysia that do not have much physical gold. It also describes a path for multiple countries to join the Malaysia Plan to reconstitute something like the global gold standard that existed from 1870–1914 without the benefit of the IMF or any central institution.”

Of course, the global power elite might well push back. If you’re a very longtime reader, you might recall Libya’s leader Moammar Gaddafi proposed a “gold dinar” encompassing several countries — shortly before Washington targeted him for regime change in 2011.

In another development on the financial warfare front, Democrats are upping the ante on China.

Several Democrats took aim at China during their most recent debate last week. Joe Biden, the overall front-runner, called for sanctions to punish Beijing for its treatment of ethnic Uighur Muslims in the northwest province of Xinjiang.

In recent months, Congress and the media have latched onto estimates that Beijing is holding more than one million Uighurs in what Biden, among others, calls “concentration camps.” (The “research” that went into those estimates is of dubious origin, but that’s a topic for another day.)

Meanwhile, Pete Buttigieg — the frontrunner in Iowa and preferred candidate of the Democrats’ donor class — talked tough about China’s policy in Hong Kong, suggesting a possible boycott of the 2022 Winter Olympics in Beijing. (Because that worked out so well for Jimmy Carter after the Soviet invasion of Afghanistan, right?)

And as we noted in August, Elizabeth Warren is also sounding confrontational about China.

For a long time, it was conventional wisdom that Beijing was holding out on a trade deal with Trump in hopes it could get a “better” deal from a Democrat after 2020.

Perhaps one reason Chinese leaders ultimately went along with a “phase one” deal this month was the recognition that long term, they’re in for a lengthy cold war with Washington, no matter who’s in charge.

Financial warfare, such as sanctions, will surely be part of that mix. Little wonder China has been working with Russia on a “de-dollarization” plan since at least 2014. Jim Rickards believes those two governments will also bring in Iran and Turkey to build a payments system, possibly gold-based, that’s “free of hacking, tracking or interdiction by the U.S. and free of U.S. dollars.”

As we keep saying, it’s a long-term process. But however long it takes to play out, it’s bad for the dollar — and good for gold.

In the very short term, Beijing is promising to cut tariffs effective with the new year — and that’s propelled the major U.S. stock indexes into record territory yet again.

The day’s economic numbers are a mixed bag. Durable goods orders registered their sharpest decline in six months during November — but once you factor out aircraft and military hardware, the number grew ever so slightly. Meanwhile, new home sales came in weaker than expected — but with year-over-year growth of 19.4%, no one’s complaining too much.

Among the big movers today is Boeing — up 2.75% after the board gave CEO Dennis Muilenburg the heave-ho in the wake of the 737 Max debacle.

For the record: The amount of global debt carrying a negative interest rate is “only” $11 trillion now.

That’s down from a peak of $17 trillion earlier this year. There’s been a sell-off in the global bond market late this year — and when bond prices fall, interest rates rise.

The Financial Times attributes the sell-off to optimism the trade war is over, at least temporarily.

We’re not so sure. But it’s worth noting a pioneer in negative interest rates, the central bank of Sweden, gave up on the practice just last week.

Also for the record: Donald Trump has abandoned his plans for tariffs on imported steel from Brazil.

The stock market trembled briefly three weeks ago today when Trump declared Brazil and Argentina would no longer be exempt from Washington’s steel and aluminum tariffs. 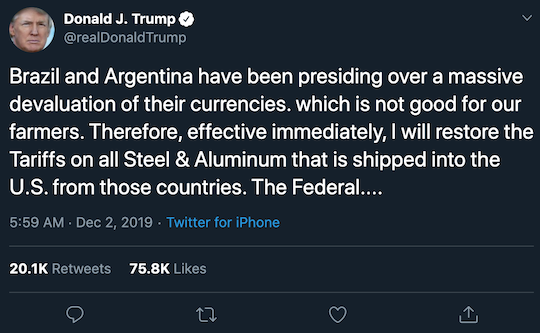 Now, after a phone call with Brazilian president Jair Bolsonaro, Trump has backtracked — at least when it comes to Brazil.

Once again, we’re reminded of Knuckman’s law, as suggested by our Chicago floor-trading veteran: Wait at least 48 hours before buying or selling anything based on what Trump says.

Even if he trots out words like “effective immediately,” it would seem…

The 737 Max fiasco is still generating new entries in our virtual mailbag, to wit…

“Several months ago I ran across a Southwest pilot I’ve known for many years in the local market. During our conversation I asked him his thoughts on the 737 Max. He indicated he had flown the aircraft many times.

“If I remember the number correctly, he said Southwest pilots must have a minimum of 5,000 hours to fly for the airline. Being a very sophisticated aircraft, in his opinion, this plane would not have gone down with a properly trained and experienced pilot at the helm. So very unfortunately, pilots were allowed to fly this plane with insufficient training and experience.

“So certainly, at a minimum, Boeing should have mandated training and experience protocols before a pilot was allowed to fly this aircraft. This pilot said he would not have a second thought about flying with his family on any Max in the Southwest fleet today.

“I thought this was an interesting perspective.

“Of course, it will take a long time for the general public to regain confidence in this aircraft, if ever.”

Our colleague Byron King has heard similar buzz. And he knows a thing or two about aviation — both as a Navy flight officer and as someone who’s logged an ungodly number of air miles in nearly 13 years with Agora Financial, scouting out oil rigs and mine sites on every continent.

“Boeing wanted to make training relatively fast and inexpensive for its airline customers,” he writes in our sister e-letter Whiskey & Gunpowder. “But the nature of the new upgrades to the old 737 airplane make this problematic.”

In a pinch, U.S. and European pilots might have the training and experience to override the sketchy software tricks Boeing used to squeeze extra life from an already 50-year-old aircraft design. Pilots in Indonesia and Ethiopia? Maybe not so much.

Meanwhile, the timetable for the 737 Max’s return to the skies keeps getting pushed back. “It may be a while,” says Byron. “April, perhaps? Or later…”

P.S. Here’s a new spin on the old saw about how “it takes money to make money.”

How much of a fortune could you turn it into?

Your jaw might drop when you click here and see the answer. There’s no long video to watch.