Still Clueless After All These Years

“The first and most important fact to realize about the Federal Reserve is that they have no idea what they are doing,” says our Jim Rickards.

Today is one of the eight days a year the Fed makes a decision about interest rates. This time, there’s no drama. After three consecutive cuts to the fed funds rate, this time the pooh-bahs will stand pat. The official word will come around the time we hit “send” on this episode of The 5.

That said, the financial media will wait with bated breath for the pooh-bahs’ economic forecasts going into 2020.

“For the past 10 years, the Fed has had one of the most abysmal forecasting records of any major policy institution,” Jim writes in the current issue of Rickards’ Strategic Intelligence.

In particular, their forecasts from 2007–2015 were horrendous.

“The biggest blunder the Fed has made was waiting too long to normalize interest rates and their balance sheet,” Jim goes on.

“The Fed’s balance sheet increased from $800 billion to $4.5 trillion between 2008 and 2014 under the quantitative easing programs QE1, QE2 and QE3. Interest rates were cut to zero in 2008 and held there for seven years. A bloated balance sheet and zero rates left the Fed in no position to cut rates or expand the balance sheet in the next recession.

“The Fed needed to increase rates to about 4% and cut the balance sheet to about $2.5 trillion to be able to deal with the next recession. They started rate increases in December 2015 and started to reduce their balance sheet in late 2017. Both moves were too little, too late.

“The Fed’s conundrum was whether they could achieve their normalization goals without causing the recession they were preparing to cure.”

Jim said in 2015 they would fail. At this time one year ago, they did fail.

“After tanking the stock market 18% between October and December 2018 and nearly causing a recession, the Fed suddenly reversed course. Since then, the Fed has cut rates three times (July, September and October 2019) and terminated their quantitative tightening (QT) program (July 2019).

“It now appears that rates are heading back to zero (probably by this time next year) and the balance sheet is headed back up to the $4 trillion level or higher.”

The Fed’s efforts to shore up the “repo” market have swelled its balance sheet nearly $300 billion since mid-September. Fed officials insist this money printing doesn’t amount to “QE4,” but a chart of the Fed balance sheet says otherwise… 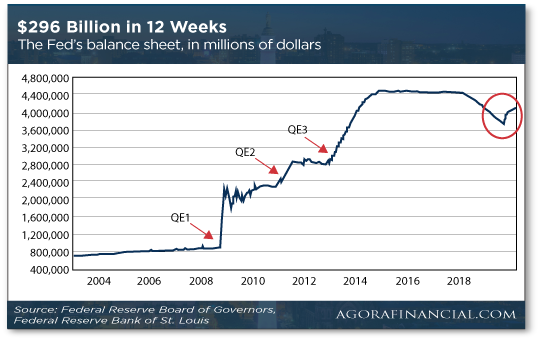 “What’s critical in analyzing Fed monetary policy is to recall it works with a lag of 12–18 months,” Jim emphasizes.

“The overtightening in 2017 and 2018 was what caused the near recession at the end of 2018. We are still feeling the effects of that today” — with GDP growth most of this year stuck in low gear at an annualized 2%.

But now, “monetary ease should also work with a lag to help growth by mid-2020. That’s good news for Donald Trump’s reelection chances, but it indicates the Fed has more work to do between now and then.”

While the Fed is standing pat today, Jim anticipates one or two more rate cuts by next summer.

“Jan. 29 and June 10, 2020, are likely dates for rate cuts. Even more cuts in March and July 2020 cannot be ruled out. Collectively those cuts would push short-term rates close to zero. At that point, the Fed would be back where they were in December 2016. Mission not accomplished.

“The only silver lining is that this rate cut path is bullish for stocks. And that’s bullish for Trump’s reelection.”

As usual, markets are treading water this morning in advance of the Fed announcement.

The lone economic number of note today is the consumer price index — up 0.3% in November, more than expected. Year over year, the official inflation rate is 2.1%.

As we always say, any resemblance to your own cost of living is purely coincidental. The real-world inflation rate from Shadow Government Statistics — calculated the same way the feds did it 40 years ago — is 9.8%.

Speaking of 40 years ago…

On further reflection, the events of late 1979 were a case of “de-dollarization” — only at warp speed.

Monday we noted the passing of former Fed chairman Paul Volcker. We went beyond the boilerplate mainstream obits that recalled his effort to rein in near-runaway inflation — especially his shock interest-rate increase of Oct. 6, 1979.

We described a global panic out of dollars despite that effort. In response to the Iran hostage crisis, the Carter administration froze Iranian assets. Wealthy people around the world — especially in the Middle East — wondered whether they might be next if their governments ran afoul of Washington’s dictates.

Then came the Soviet invasion of Afghanistan, and Carter’s embargo of U.S. grain sales. Would Soviet-bloc assets be frozen? And would that mean a default on Soviet-bloc debt to Western banks — resulting in a global bank run?

The panic out of dollars led to the gold price doubling in only three months. But this wasn’t just a case of the dollar having a near-death experience…

With the benefit of a couple more days’ thought, it’s obvious to us the Carter administration was waging economic warfare of the sort that makes weekly headlines nowadays.

Between sanctions and other dollar-based punishment, Washington currently wages economic warfare against a dozen countries comprising more than a quarter of the world’s population. Russia, China, Iran, Turkey, Venezuela…

In particular, Washington has leaned hard on the Belgium-based SWIFT payments network to ban hundreds, perhaps thousands, of people and companies overseas from dollar-based transactions.

As analyst Gal Luft wrote for CNBC last year, “When the U.S. decides to impose unilateral sanctions, as in the case of Iran, it essentially tells the world's governments, corporations and individuals they must choose between halting business with the sanctioned country or be shut off from the world's No. 1 economy.”

Little wonder the targeted nations are pursuing “de-dollarization” measures of the sort we’ve been describing since 2014.

In the short term, many of them are carrying out trade in each other’s currencies. In the long term, they’re developing an alternative payments network that would bypass the dollar — perhaps one with gold backing.

(We see Mr. Luft came out recently with a book called De-Dollarization: The Revolt Against the Dollar and the Rise of a New Financial World Order. We’ll have to add it to our already too-high reading pile.)

Anyway, think of the panic of late 1979–early 1980 as a preview of coming attractions. Paul Volcker was able to restore global confidence in the dollar back then. We doubt Jerome Powell or his successors can pull it off a second time. Got gold?

OK, we can’t help it: One more postscript about Volcker while we’re at it.

The economics blogger Robert Wenzel reminds us that once the crisis had passed, the Fed under Volcker resumed its money-printing ways in August 1982.

Not coincidentally, that month marked the start of an epic bull market for stocks. The Dow would never dip below the 1,000 mark again after 1982. The bull ran all the way until the dot-com bubble burst in early 2000.

As it turns out, Volcker had given in to immense pressure from the Reagan administration.

We can’t say it often enough: Fed “independence” is a myth and Donald Trump is hardly the first president to pressure the Fed to do his bidding.

[Credit where it’s due: Once more this week we’re indebted to Richard Maybury’s book The Money Mystery for some overlooked history about the Volcker era. Maybury has written a dozen titles about economics, politics and history for young adults. They’re huge with the homeschooling crowd. Highly recommended for all ages.]

To the mailbag, where Jim Rickards’ comments about gold — and a windfall profits tax on gold — are generating more feedback.

“And it will be far easier to barter with a $100 item (I have never had a problem with a Benjamin) than a $4,000 item. Silver looks like the no-brainer here when the SHTF. Why buy gold instead?”

The 5: If you’re really thinking about an SHTF situation — which is not our rationale for precious metals as an asset class, by the way — you probably want both.

Yes, silver is undoubtedly better for smaller transactions. But if you have to bug out, gold is a heck of a lot more transportable. Use your silver for getting by day to day and hold on to your gold to convert into whatever is the commonly traded currency unit after the crisis passes.

If you’re truly serious about SHTF, though, look at a small stash of junk gold jewelry. At least that’s the guidance of Fernando Aguirre, an Argentine who survived the infamous corralito of 2001–02 — when the peso was devalued 75% against the dollar.

As he explains in his book The Modern Survival Manual: Surviving the Economic Collapse, you can more easily fly under the radar with something like an old wedding band. “Imagine replacing your real wedding ring with one of these, going to the ‘I buy gold’ guy or pawnshop, pulling it off your finger and with your Oscar-winning face you ask, ‘Sir, how much can I get for it?’

“You look just like another poor soul and you are not attracting attention to yourself.”

“To respond to the reader’s question about a windfall profits tax on gold, Jim Rickards’ comments from 2013 are excellent,” writes our final correspondent.

“The question is a complaint — there are no pre-ordained guarantees of security.

“You have said it so many times before — the market hates uncertainty. We have to live within the risk/reward world, and managing those skills determines who can act when action is called for.

“The information provided in The 5 Min. Forecast provides a full range of information (some of it contrary to a particular subscriber’s investment goals or desires) for consideration in implementing an ongoing investment strategy.

“Having information wider than my own perspective is vital and that is what you provide — more than what was initially asked for. Keep up the good work.”

The 5: Thanks. And thanks for “getting” what it is we do around here!

P.S. After spotlighting Jim Rickards today, we’re reminded Jim’s publisher has re-opened access to one of his most popular high-end trading services.

In this service, Jim leverages a powerful predictive tool first developed for a long-abandoned CIA project. It could mean thousands of extra dollars to you, every week.

But if you have any interest at all, you’ll want to check it out right now… because access shuts down at midnight tonight.