The feds are punking us all, right?

As the feds tell it, Evil Corp used malware called Dridex to “infect computers and harvest login credentials from hundreds of banks and financial institutions in over 40 countries, causing more than $100 million in theft.” 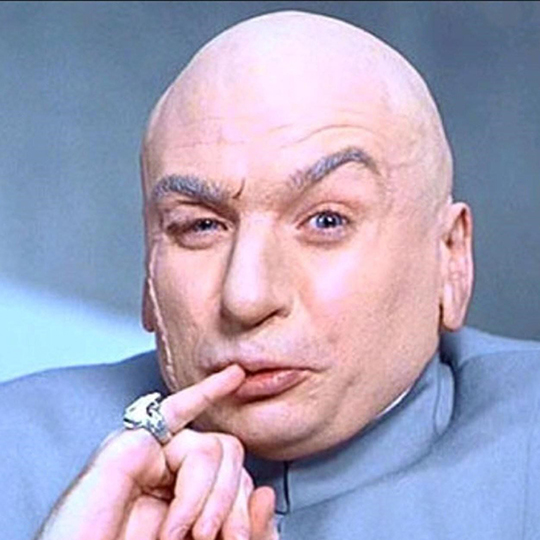 “Why make trillions when we can make… BILLIONS!”

Problem is, this hacking conspiracy was supposed to have been first hatched in 2011… and Mr. Robot didn’t debut until 2015. Huh?

Really, what sort of impact will these sanctions have, anyway?

To make the whole thing seem more credible, the Justice Department got in on the act and charged two Russian nationals supposedly behind Evil Corp. An assistant attorney general told reporters that one of them worked for Russian intelligence, because of course that’s what the feds will say.

Not that the allegation will ever be tested in court. By all accounts, the two men are in Russia — which has no extradition agreement with the United States.

Meanwhile, here’s a funky story that if it happened in Russia would be labeled as “oligarchical.”

For the last few days, if you typed “Mike” into one of those fancy Bloomberg terminals, you’d be redirected to… the website for Michael Bloomberg’s presidential campaign.

The Financial Times was first to make this discovery. The FT even made a GIF to illustrate how it worked…

“This functionality was in contrast to the treatment of other notable individuals on the terminal,” the FT points out. “Users are typically directed to a simple, standardized biography page which includes business information, a photo and recent news stories.”

Of course, as we said just yesterday, Bloomberg News has already shredded its credibility by adopting a policy of — as a company memo puts it, “not investigating Mike” and extending “the same policy to his rivals in the Democratic primaries.” How much more damage can this new development do, really?

After the FT reporter put in an inquiry, Bloomberg (the operator of the terminals) changed the redirect to go to the Bloomberg (the guy) bio page like everyone else. That’ll put the toothpaste back in the tube…

The recession has been postponed again. At least that’s our cheeky takeaway from the job numbers out this morning.

The wonks at the Bureau of Labor Statistics conjured 266,000 new jobs for November — way more than expected. In addition, the October and September figures were revised up.

Scratch the surface, though, and the figures aren’t nearly as exciting. The 54,000 new jobs in manufacturing? Most of them are General Motors workers returning from a strike. The 45,000 new jobs in health care? Most of them are low-paid paper pushers; they’re not “breadwinner jobs,” to borrow a phrase from Reagan budget director David Stockman. Ditto for the 45,000 jobs added in hotels and restaurants.

Thus, wage growth for November came in below expectations. The acceleration we’ve seen going back to 2015 is slowing appreciably. 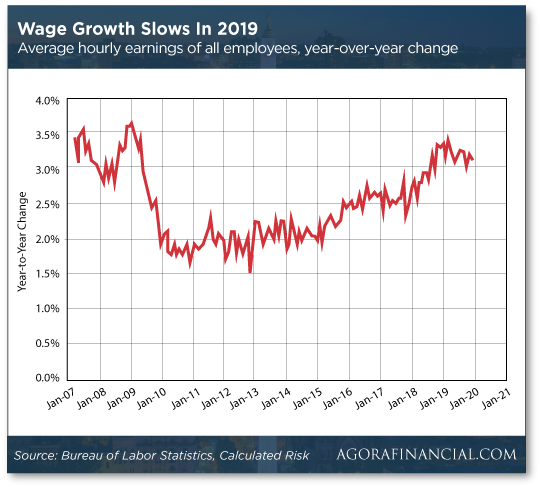 Meanwhile, the official unemployment rate inched down to 3.5%, equaling a 50-year low. The number was 3.5% in September as well, before registering 3.6% in October. As we mention now and then, a recession typically sets in four months after the jobless rate hits bottom; at least that’s the average going back to 1950. By that yardstick, the post-2008 expansion just bought itself a little more time!

The real-world unemployment rate from Shadow Government Statistics inched down to 20.9% — equaling the lowest figure since the summer of 2009.

Meanwhile, bonds and gold are selling off. A 10-year Treasury yields 1.83%, while gold has been knocked back to $1,461. The job numbers have squashed any chance the Fed might cut interest rates next week.

Crude is up a buck to $59.46 after the twice-a-year OPEC-plus-Russia summit in Vienna. Member nations agreed to cut production another 500,000 barrels a day through next March — on top of the 1.7 million barrels a day of existing cuts.

Saudi Arabia pushed hard for these cuts, hoping to goose the oil price and support the state-owned oil company Saudi Aramco. Only yesterday, Aramco set its IPO price at $8.53 a share, raising $25.6 billion. That’s high enough to break the IPO record set by China’s Alibaba in 2014… but not high enough to make Aramco a $2 trillion company as the hotheaded crown prince Mohammed bin Salman wants. (It’s closer to $1.7 trillion.)

Finally someone in Congress has awakened to the crisis in the repo market.

As you might recall, the market in “repurchase agreements” froze up in mid-September. These are the overnight loans Wall Street firms take out for their daily trading — essential lubricant for the financial system.

The Federal Reserve has stepped in ever since to supply some of those loans… and even to juice the market by buying Treasury bills from those same Wall Street trading houses. These emergency operations have swelled the Fed’s balance sheet at a pace last seen during “quantitative easing” seven years ago. 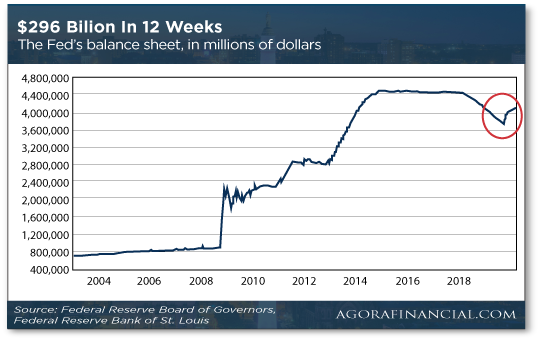 Until this week, Congress had expressed no interest in who was getting these ultracheap loans from the Fed — or why they needed them.

On Wednesday, the Fed’s Vice Chair for Supervision Randal Quarles appeared before the House Financial Services Committee. Asked by Rep. Patrick McHenry (R-North Carolina) why the Fed had to act, Quarles gave a jargon-laden snow job about how banks’ liquidity had suddenly tightened thanks to requirements under the 2010 Dodd-Frank Act.

Rep. French Hill (R-Arkansas) wasn’t buying it. “When you see the amount of the reserves held by the banks they’re extensive; they’re far above any requirement by the Dodd-Frank rules.

“The four largest banks collectively have more cash with the Fed than the next 24 combined. How does the Fed make clear to the banks that interday lending is a good thing, that is, that other banks have access to those amounts of cash that are far in excess of what they need regulatorily?”

As Pam and Russ Martens write at Wall Street on Parade, “Clearly, the biggest banks are hoarding and/or backing away from questionable financial institutions that they don’t want to lend to.”

The question remains why. What are they so spooked about? This week’s hearings didn’t get any closer to the answers.

At the risk of overstatement, Congress is getting very interested in where your gold comes from.

We did a deep dive into the “blood gold” phenomenon three months ago — gold bars with counterfeit serial numbers, the better to cover up how the gold was mined in Latin American and West African countries subject to economic sanctions. The proceeds finance drug traffickers, warlords and dictators.

Rubio has taken a keen interest in the gold flow from Latin America through Miami — claiming 58% of America’s gold imports come from Latin America. “Unfortunately, my home community… has become a major entry point for this activity. It’s refined, it’s made into jewelry or placed into our electronics and then it’s sold to U.S. consumers — much of it, if not all of it, untraceable.”

Rubio has co-sponsored a bill with Sen. Ron Wyden (D-Oregon) and Sen. Sheldon Whitehouse (D-Rhode Island) that, in the words of the Miami Herald, “would require anonymous shell companies and limited liability companies, often used by fraudsters and criminals to hide their assets, to disclose their true owners to the U.S. Treasury Department.” A version of this bill passed the House in October.

As advocates for gold — both as a portfolio diversifier and a way to secure a measure of financial privacy — we don’t like the sound of this.

Rewind a few years ago to when ISIS was thriving as an honest-to-God nation-state in eastern Syria and western Iraq. In late 2014, the nascent ISIS government announced plans to issue a gold dinar currency — aimed at getting out from under what ISIS called the “tyrannical financial system imposed on Muslims.”

We looked upon this development with trepidation: “If ISIS adopts a gold currency, does that make gold owners terrorist sympathizers?” we asked, tongue only partially in cheek.

Five years later, gold is being denounced by a bipartisan coalition in Congress as a substance that’s enabling terrorism, drug dealing and so on.

Sure, the targets of the current legislation are the importers and their big corporate customers. But then what? The Miami Herald story tells us that Sen. Ben Cardin (D-Maryland) “suggested Congress might pass a ban on gold imports.”

From there it’s not a huge leap to ordering individuals with substantial metal holdings to account for where their gold came from. Probably another argument for U.S. Gold Eagles; aside from all their other advantages, the feds probably won’t inquire too closely about the provenance of bullion they minted themselves.

No, it won’t be a prelude to gold confiscation — a concern that comes up from time to time. As our Jim Rickards has said for years, a 90% windfall profits tax on gold is far more likely, and because it’s a tax it can’t be imposed via executive order; it would have to go through Congress first.

We wrap up the week with a 5 business travel alert that for once isn’t bad news: You won’t have to submit to a face scan when entering or leaving the country.

From the Reuters newswire: “The Trump administration said Thursday it no longer plans to propose a regulation next year that would require all travellers — including U.S. citizens — to be photographed when entering or leaving the United States.”

Earlier this week, the Department of Homeland Security submitted a regulatory filing for just that. Constitutional conservatives and principled leftists alike were appalled: “Travelers, including U.S. citizens, should not have to submit to invasive biometric scans simply as a condition of exercising their constitutional right to travel,” said the ACLU’s Jay Stanley.

Yesterday, DHS backpedaled. “There are no current plans to require U.S. citizens to provide photographs upon entry and exit from the United States,” said a statement. Supposedly the reversal came after DHS consulted with Congress and privacy experts.

Or was it the sheer embarrassment of the news coming out at the very moment the Chinese government ordered anyone registering a new mobile phone number to submit to a face scan?

Really, you can’t make this stuff up…

P.S. I recently ventured back to Agora Financial headquarters in Baltimore to meet with colleagues.

Unfortunately, some of them were a little too busy celebrating to get much business done.

But I didn’t complain — not when I saw the reason they were so happy.

In fact, I sequestered myself from the noise just long enough to record a brief video. Watch it now and you’ll see why I think it could be the most important video you see this year.