Who’d have guessed that New Hampshire is the epicenter of trafficking in one of the most addictive substances known to man?

In fact, there’s strong evidence of a pipeline flowing from the Live Free or Die state, down interstates 93 and 95, direct to New York City.

Who knows, it might be some of the most lucrative black-market trade on the planet — an appropriate topic here on this day, the 86th anniversary of Prohibition’s repeal.

“A notable consequence of high state cigarette excise-tax rates has been increased smuggling as people procure discounted packs from low-tax states and sell them in high-tax states,” says a new report from the Tax Foundation. “Growing cigarette tax differentials have made cigarette smuggling both a national problem and, in some cases, a lucrative criminal enterprise.”

The report comes complete with one of the Tax Foundation’s most excellent maps — showing where the outbound and inbound traffic are highest. (Click on the map to enlarge it.) Low-tax New Hampshire is the top net exporter of smuggled cigarettes — with an estimated 65% of the smokes sold there leaving the state for higher-tax jurisdictions.

Meanwhile, an estimated 55% of the cancer sticks consumed in high-tax New York state come via the black market from lower-tax jurisdictions. 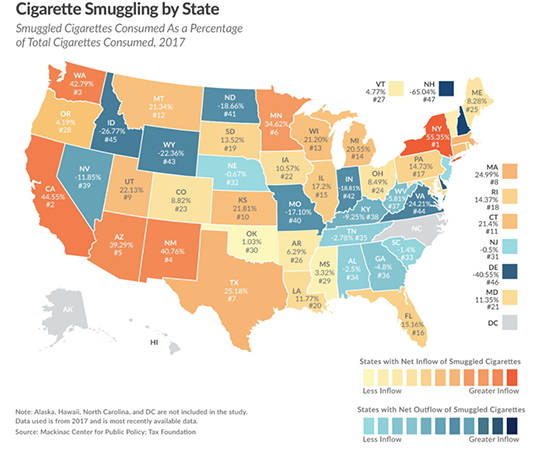 New York City has the highest cigarette taxes in the country — $5.85 a pack. It was a dealer in smuggled smokes, Eric Garner, who was routinely harassed by the NYPD until his death at the cops’ hands in 2014 became national news. (We stirred the pot when we revisited his case last summer, invoking the memory of John Hancock.)

And the smugglers are already eyeing an opportunity for expansion — into increasingly illegal vaping products.

Michigan Gov. Gretchen Whitmer declared a ban on e-cigarettes shortly after Labor Day. Smoke shop owners have gone to court and prevented the ban from taking effect just yet.

But Michael LaFaive from the Mackinac Center for Public Policy says if the ban becomes reality, the consequences are obvious: “Smuggling of vaping products would likely become a new profit source for today’s large-scale cigarette smugglers. They’ve already established networks in the state; adding supplies of small, flavored vaping cartridges or liquids to their supply chain would be all too easy.”

When Massachusetts enacted a vaping ban in September, business suddenly boomed at smoke shops next door in — here it is again — New Hampshire. “I think it’s stupid that they banned it, and I’m going to keep vaping anyways,” one customer told Boston public radio station WBUR. (State courts reversed the ban in late October.)

As we mentioned last week, California’s already-steep taxes on legal marijuana will rise come the first of the year. And regulations are stifling.

The black market there is so pervasive, 60 Minutes did a segment on it last month. One grower totaled his regulatory compliance costs — “$2,500 a year for the water board discharge permit. It’s $750 a year for the pond permit. It’s $1,350 application fee to the county, plus another $675 when they actually give you the permit, annually.”

Asked about his profits, he said, “What profits?” He’s 50 large in the red.

Ontario, for example, set up a Byzantine lottery system for awarding licenses, shutting out the most skilled operators. Result: Legal cannabis sales for the nine months ending last July totaled $151.1 million — barely more than the total in Alberta, with one-third the population.

Anyway, enough hand-wringing over the law of unintended consequences. Let’s turn to the markets, shall we?

The only big mover in the markets these last 24 hours is crude oil — zooming back to top of its trading range the last few weeks at $58.66, thanks to a return of “geopolitical tensions.”

The White House floated a trial balloon in The Wall Street Journal about “a significant expansion of the U.S. military footprint in the Middle East to counter Iran, including dozens more ships, other military hardware and as many as 14,000 additional troops.” That’s basically doubling the number of troops who’ve been deployed since May.

The reaction from some corners of Trump nation has not been kind — to wit, Sen. Josh Hawley (R-Missouri)…

More from the article: “Mr. Trump, facing an election next year, has long sought to exit foreign entanglements and avoid new conflicts. But on Iran — and partly at the behest of Israel — he is convinced of the need to counter the threat his aides say Tehran poses.”

That sentence hints at a quandary facing the president — and his 2020 campaign team.

He has two committed constituencies he can’t placate at the same time. Who does he mollify? Is it the masses who chant “Bring them home!” — meaning the troops — at his rallies? Or is it the millions who follow fundamentalist preachers like John Hagee and Robert Jeffress, seeking ever-escalating confrontation with Iran on theological grounds?

Seems like the bulk of Trump’s top advisers lean toward the second camp — certainly Secretary of State Mike Pompeo — while Trump’s only exposure to voices of restraint is when he happens to turn on Tucker Carlson Tonight.

Of course, war with Iran would probably shut down the Straits of Hormuz and bring about $4 or even $5 gasoline. Seems like a risk the president can’t afford to take in an election year unless he’s got large numbers of Americans convinced that kind of wartime sacrifice is necessary… and we’re nowhere near there now.

Elsewhere, markets are moving little. The major U.S. stock indexes are in the red, but not by much. Gold is inching up within a few pennies of $1,480.

No market-moving economic numbers to speak of. Tomorrow brings the monthly job figures. The “expert consensus” among dozens of economists polled by Econoday is for 180,000 new jobs in November.

A surprise to the downside might move the needle at the Federal Reserve in favor of another interest rate cut next week. But even then, the odds remain somewhere between slim and none — and Slim’s gone home early for the holidays.

As long as we have negative interest rates on the brain this week, we take note of a milestone in Germany.

“After five years of negative rates imposed by the European Central Bank,” says a Bloomberg article, “German lenders are breaking the last taboo: charging retail clients for their savings starting with the very first euro in their accounts.”

Up till now, negative rates have been imposed only on deposits exceeding 100,000 euros — about $111,000. “That is changing,” we’re told, “with one small lender close to Munich planning to impose a rate of minus 0.5% to all savings in certain new accounts. Another bank in the east of the country has introduced a similar policy and a third is considering an even higher charge.”

This break with precedent is even bigger than you might think. Germans save way more of their disposable income than other Europeans, to say nothing of spendthrift Americans.

On a related topic: Today is the first time we’re faced with an editorial conundrum.

“If Mike Bloomberg had any respect for the news business,” writes Matt Taibbi in Rolling Stone, “he would encourage his editorial staff to kick him in the balls at every opportunity. Either that, or he would sell his media business. Or not run for president.”

Instead, as we noted last week, Bloomberg News will do no critical coverage of either Michael Bloomberg or any of the other Democrats seeking the office. Donald Trump, however, still is fair game.

“With this decision,” Taibbi says, “Mike Bloomberg just put the roughly 2,700 journalists who work for him in a terrible ethical bind. If huge portions of the political landscape are closed off to those reporters by fiat, by definition none of their reporting in any other direction can really be legitimate.”

And so we’ve been thinking the last few days about whether — in the interest of our own credibility with you, dear reader — we should cite Bloomberg News on any topic.

We’ve decided to proceed on a case-by-case basis. If it feels as if we need to inject a caveat, we will. But we won’t throw out the baby with the bath water: Over the years this e-letter has cited everyone from The New American (a Bircher publication) to the World Socialist Web Site.

To the mailbag: “Your high-earning expatriate in Panama is funny. He’d continue paying into the Social Security system because he doesn’t need the money and to avoid Social Security running out before he becomes eligible for benefits.

“Take a moment and think about that statement.

“My reform proposal: Lower the cap subject to FICA tax in exchange for an income test to receive benefits, to make it more like an insurance policy against poverty, as intended by its originators.”

The 5: Means testing runs into the same problem: There’s no longer a relationship between the amount of money you put into the system during your working years and the amount you take out in retirement.

We’re not saying that’s good or bad. We’re just saying that was the intent of the system as it was set up. Everyone pays, everyone benefits.

“As a follower of Andy Borowitz’s humor I think that you may have missed the point,” a reader writes after we lamented on Tuesday how he’d gone downhill. “He hasn’t changed, he’s still very funny.

“Let me help you understand. If you’ve been following our president’s tweets and other writings, you may have noted that his ability to spell correctly is quite limited. And while I can appreciate that correct spelling is just a habit of the bicoastal elites, I think that this is what Borowitz was referring to in his comment.

“Of course, if you have to explain a joke, then it’s not funny.”

“View the meth PR campaign in context,” a reader urges us after we noted South Dakota’s strange anti-meth campaign, concocted by a Minneapolis ad agency.

“For 130 years, Minnesota government and business have treated South Dakota (and North Dakota) as colonies. Those few SD politicians (of either old party) who buck against this are very short-lived politically.

“But once in a while, some MN-centric SD politician or bureaucrat pushes just a bit too much, and people become aware — and get ticked off. It happens on SDDOT highway projects, all kinds of services to state government (including higher education) and national elections.

“Recently, there have been a lot of mistakes made by MN and its populist elite: This is the latest (and, frankly, pretty small potatoes).”

The 5: Thanks for the regional insight. Casual Googling reveals a certain condescension on the part of Gopher staters, such as the riddle: “Why do all the trees in Minnesota lean west?” (Answer: “North Dakota sucks.”)

P.S. One more reader email: “For Dave: I’d be interested in a description of your daily informational intake. Love The 5!”

OK, I’m on it. Watch for it sometime before the end of the year.