The End of Social Security As We Know It

The link was to a looong New York Times piece that went beyond the usual chatter about soaking billionaires.

“There’s also a less discussed tax increase in leading Democratic policy proposals that would affect not just a tiny sliver of the ultra-wealthy, but also millions of high-income workers. For these people, many of them affluent professionals in Democratic strongholds, it would be the biggest tax increase in recent memory.”

This proposal might seem familiar if you’ve been keeping up with The 5 this year. But with the presidential race moving into the next gear, it’s worth a closer look today.

If you’re a higher earner, you’re likely aware that any income you earn over $132,900 this year is not subject to Social Security tax. The number is adjusted for inflation each year; in 2020 the limit steps up to $137,700.

Under a Social Security overhaul bill introduced by House Democrats this year, that limit would stay in place… but payroll tax collection would resume at $400,000 and higher.

We did a brief Q-and-A about this proposal earlier in 2019:

Perhaps not surprisingly, the frontrunners for the Democrats’ presidential nomination are upping the ante — and lowering that $400,000 threshold.

Back to that lengthy NYT story from last week: “Elizabeth Warren, who has the most detailed plan, would tax earnings above $250,000 at a 14.8% rate, including both the employees’ and employers’ share.” The plan “would affect around 7 million Americans, compared with the 75,000 that her advisers estimate would be affected by the wealth tax.”

But it’s not just the “socialist” wing of the party.

Meanwhile, “Joe Biden has pledged to increase benefits and solidify Social Security’s finances without detailing exactly what changes to payroll taxes he would use to do so,” says the Times story.

Michael Bloomberg’s position appears to be equally formless at this although his announcement video from Sunday certainly leaves the door open to higher taxes in general on the wealthy. Exactly who qualifies as “wealthy” when you’re the eighth-richest American according to Forbes we’re not altogether sure…

Whatever the details, the result would be the end of Social Security as envisioned by its architects back in the 1930s.

As the Times story makes clear, the proposals “would eliminate a feature of the Social Security system that has made it politically untouchable through the decades — that the taxes Americans pay in are closely related to the benefits they eventually receive, assuming they live long enough.”

No longer would Social Security be a forced-savings program. It would be an income-redistribution program.

“The traditional argument has always been that Social Security is very popular because it’s not seen like a traditional welfare program,” Kyle Pomerleau of the American Enterprise Institute tells the Times. “What you pay in roughly corresponds to what you get.

“Once you start taxing certain levels of income without providing additional benefits based on that tax, you are breaking that link.”

True, the proposals would shore up Social Security’s iffy finances — perhaps for many decades to come.

But at what cost?

[Ed. note: As a practical matter, all of this discussion is academic until we get to 2021.

In the meantime, it’s not too soon to start thinking about your income taxes as we approach year-end. That’s why our Robert Kiyosaki has pushed his team to get a jump on the Rich Dad 2020 Tax Guide — packed with tips and tricks for legally lowering your obligations to Uncle Sugar.

It’s ready for downloading now. Sure, you’re busy getting ready for Thanksgiving, but if you take advantage of this offer today you’ll be fully prepared for when the time comes to file. Give it a look right now — there’s no long video to watch.]

OK, these all-time highs are finally starting to feel like the real deal.

But small caps have been lagging all year. Without their participation, any rally looks shaky. That’s especially true now; small caps have less exposure to global trade flows, so they’re not as vulnerable to every little trade-war headline.

At long last, however, the small-cap Russell 2000 index is catching up with its big brothers.

The Russell quietly started outperforming the S&P when the calendar flipped to the fourth quarter. But a true breakout proved elusive — until yesterday. Greg’s been following IWM, the big Russell 2000 ETF. The key level was $160… and IWM busted through yesterday. 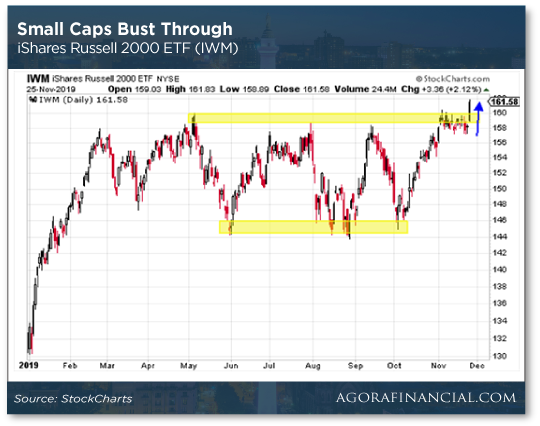 “After a difficult year of underperformance,” says Greg, “small caps have stormed higher. IWM is now up more than 21% year to date, compared with a 25% gain in the large-cap S&P 500.”

That said, the Russell is still far from record territory. Checking our screens this morning, the index rests at 1,628 — well below its August 2018 peak at 1,740.

In the absence of any urgent trade-war news today, ponder this — China’s former finance minister warning of a “financial war” between the United States and China.

His name is Lou Jiwei, and he spoke a couple of weeks ago at a conference in Beijing.

“The next step in the frictions between China and the United States is a financial war,” he said. “It is characterized by the use of long-arm jurisdiction, by various excuses to block specific enterprises, such as the bans on ZTE and Huawei.

“The U.S. has been hijacked by nationalism and populism,” he went on, “so will do everything in its power to use bullying measures… Containment and anti-containment are inevitable and will be a long-term issue.”

Not exactly news if you read our daily missives. But coming from someone of his stature, it reaffirms our thesis that the trade war is morphing into a new Cold War — something that could drag on for three more decades.

For the record: Germany’s central bank is growing its gold reserves for the first time since the late 1990s.

We’re a bit tardy in noting that the Bundesbank raised its gold reserves in September about 2.6 metric tons.

“This is not a huge amount (Russia buys about 30 metric tons per month), but the fact that Germany increased its reserves at all is big news,” says our Jim Rickards.

Many central banks around the globe have increased their gold reserves over the last decades. But mostly they’re in developing economies. Germany breaks the mold.

“There are several ways to interpret this move,” Jim tells us. “Germany may simply want to diversify its holdings away from Treasuries and other sovereign debt. Germany may anticipate inflation in Europe and knows that gold is the best inflation hedge. Finally, Germany may see a global move away from U.S. dollar hegemony and could be hedging its bets.

“None of these reasons is positive for the dollar. But they are all extremely bullish for gold.”

California is doubling down on its ham-fisted cannabis taxes.

Recreational marijuana became legal in the Golden State on Jan. 1, 2018. But months before that happened, we sniffed trouble ahead. Not only would the state impose a 15% sales tax on cannabis… but also a flat $9.25-per-ounce tax on flowers and $2.75 per ounce on leaves, no matter the market price!

Little wonder that almost two years after legalization, black-market pot sales in California will total an estimated $8.7 billion in 2019 — compared with $3 billion in legal sales.

Now comes word the taxes will rise. For starters, the sales tax calculation is changing. We’ll spare you the complicated details; the end result will be the state demanding a bigger chunk of money from every (legal) pot sale. Meanwhile, the flat tax on flowers rises from $9.25 to $9.65… and the tax on leaves jumps from $2.75 to $2.87.

The situation is so preposterous the state has launched a new drug war — busting black-market grow sites. Attorney General Xavier Becerra put out a press release bragging about 345 raids and 148 arrests this year.

Well, it gives law enforcement something to do…

“So readers from both sides of the aisle are taking potshots at you?” writes one of our regulars. “That means you’re doing something right — like being rational and focusing on the issues.

“It’s funny how the cherry-pickers never seem to appreciate that. They just keep finding ways to see what they want to see and pop off.

“Unfortunately, it also means the MSM are doing a good job of getting in our heads with their divisive, partisan rhetoric. This isn’t surprising, really, considering it’s all they do 24/7/365. They are nothing if not relentless!

“Anyway, here’s to The 5. It is one of the few sources I rely on every day for insight and clarity. I’m sure many other folks do as well.

The 5: Thanks. It’s a weird time when so many people are engaged in one form or another of “identity politics”…

P.S. It’s been one of the most profitable strategies Agora Financial readers could follow during 2019.

But after tonight, this service will be closed to new readers. We urge you to check it out right now while there’s still time.