Another one bites the dust: The DOJ charged a JP Morgan exec with racketeering and manipulating precious metals late last week.

Jeffrey Ruffo — a salesman of precious metals-vested hedge funds — is in good company (well, bad company), joining six other JPM execs who were caught up in the sting.

The DOJ’s investigation looks into the desperate days of 2008–2016, gathering enough evidence that points to some unscrupulous goings-on at JPM’s precious metals sales desk.

The 5 previously covered the unsavory practice in question; it’s called spoofing, whereby traders place buy and sell bids with the intention of cancelling them before the bids are executed. The result? Creating the pretense of demand and, in turn, pumping up the prices of metals.

“According to the DOJ’s indictment,” Mr. Ruffo, “encouraged JPMorgan traders to place deceptive orders to create price advantages for his clients,” says Reuters.

The DOJ has a tough row to hoe, however; last year, a metals trader at Swiss bank UBS was acquitted of spoofing (it’s a difficult practice to prove since so many market orders go unfilled as it is.)

Reuters continues — and this is comical — “Some lawyers also argue it is aggressive to charge bank executives with… racketeering conspiracy, which is usually associated with organized crime.” In other words, RICO charges.

Aggressive? We call them banksters for a reason, folks. 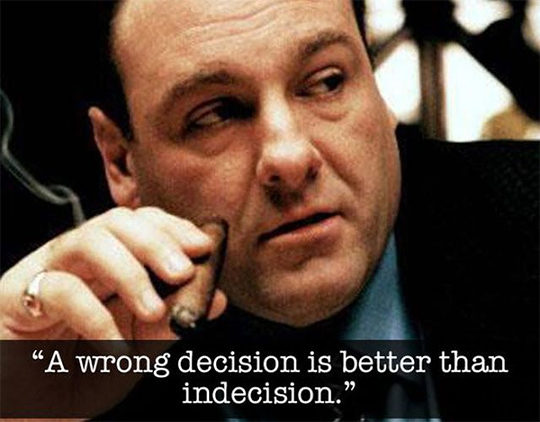 Words to live by… at JPM?

And it’s not just precious metals, says our iconoclast investor James Altucher. “The stock market is totally manipulated,” he says. “It’s a scam.”

James’ background in the world of finance is wide ranging. As a venture capitalist and former hedge fund manager, James says: “I’ve probably analyzed the track records and strategies of about 1,000 different hedge funds.

“I honestly can’t think of a strategy I haven’t experimented with,” he continues. “But now Wall Street is dominated by algorithms and high-frequency traders.

“The way I see it, there are only three ways to make money on Wall Street:

We are in no way endorsing the second option — look what happened to Martha Stewart! Hmm… on second thought, unless you’re already rich and powerful, don’t attempt the second. You’ll probably get more than just a slap on the wrist.

As for the third possibility: “Until now, there hasn’t been an easy way for regular investors to make money with No. 3,” says James.

“Right now more than 60% of all public trades are done by Wall Street’s high-frequency trading algorithms,” he says, “and a single mistake causes the market to reel within seconds (think: flash crash).”

That’s just the reality of the stock market today… and these nanosecond crashes are called high sigma shocks.

James believes the frequency of these glitches creates dozens of opportunities for average retail investors to profit from. But the “windows” open sporadically and for mere seconds at a time.

“Because of my experience in algorithmic trading and computer hacking,” James has stumbled on something “perfect for regular stock trading or for leveraging options for maximizing gains.

“The jury is in,” he says. “My finished program absolutely outperforms anything I’ve ever seen or done on Wall Street.

“I even reached out to a mathematician and Harvard quantitative financial analyst to ‘stress test’ the code using every market condition conceivable.

“Even in market downturns,” James says, “we STILL averaged 179% per week. And we’ve continued to prove the strategy time and time again during our recent beta test with real users.”

James says: “We are convinced that this strategy will deliver even bigger profits in the months ahead.”

[Ed. note: James unwraps his latest invention — in an exclusive report — that leverages AI algorithms to put the power back in the hands of retail investors and retirees.

James walks you through how his system works… and why it can tease a fortune out of glitches in the stock market.

Here James reveals everything you need to know to start profiting. You’ll have all the tools you need to beat Wall Street insiders at their own game.

The markets are downright somnambulant today — although the mainstream media have roused themselves to mumble something about the trade war. *eyeroll*

“I’ve been looking at several cannabis and hemp companies that will unveil the latest in cannabis production technology,” Ray Blanco reported from the Florida Cannabis Expo in Miami.

Ostensibly, the expo’s off-limits to reporters; nevertheless, Ray gave us a play-by-play of the action: “There were lots of major players there that hoped to breathe new life into the marijuana-sphere,” he says. “Everything from production to the final sale is important.”

According to Ray, Florida’s the next frontier for the North American marijuana industry. “Think cannabis cultivation, brand development, greenhouse growth operations and the latest in banking and pot licensing,” he says.

“And with the passing of the Farm Bill last year and the recent USDA guidelines announcement, we’ll have plenty to look forward to with hemp as well.”

While Ray was at the expo, some momentous news broke…

“A key congressional committee plans to hold a historic vote on a bill to end the federal prohibition of marijuana [this] week,” Forbes reports.

The bill aims to “remove cannabis from the Controlled Substances Act” and allocate funding for people affected by unreasonably tough marijuana laws, including money for legal aid and job training.

“Currently, there isn’t much bipartisan support… 54 of the 55 co-sponsors are Democrats. But we’ve seen instance after instance of Republicans publicly supporting marijuana, so there’s strong hope this bill could pass.”

The vote goes down today and it’s critical for the fledgling marijuana industry. “This is a major moment for our leaders to do things right,” says Ray, “not only for an industry the people clearly approve of but also to keep their citizens safe.”

As always, we’ll keep you posted…

[This Just In: The House Judiciary Committee passed the MORE Act — 24-10. This is the first time in history a congressional committee’s approved a bill to end the federal ban on marijuana.]

While the nightly newscast in America focuses on demonstrations in Hong Kong, the “yellow vest” movement in France reached a milestone. To mark the one-year anniversary of the movement, an estimated 28,000 citizens demonstrated across France on Saturday — just one-tenth the number expected, by the way.

(Why “yellow vests”? A 2008 French law required all motorists to keep a yellow vest in their vehicles in case of emergency. So… indicative of government overreach? Emergency? Make of it what you will.)

In December last year, we heard from a French reader who witnessed the yellow vest movement firsthand. He said: “People… are protesting against tax increases on gas and income, lower retirement payouts, mandatory vaccinations, etc.

“Ambulance drivers, truck drivers [and] taxi drivers… are striking because of gas price hikes. Other protestors are mothers, businessmen, entrepreneurs and [farmers] who are saying ‘enough is enough.’”

Of note, the yellow vests will join trade unions representing railway and public transit workers on Dec. 5 in a strike against President Macron’s proposed pension reforms.

As our French reader said at the time: “Not a good time to visit Paris.” 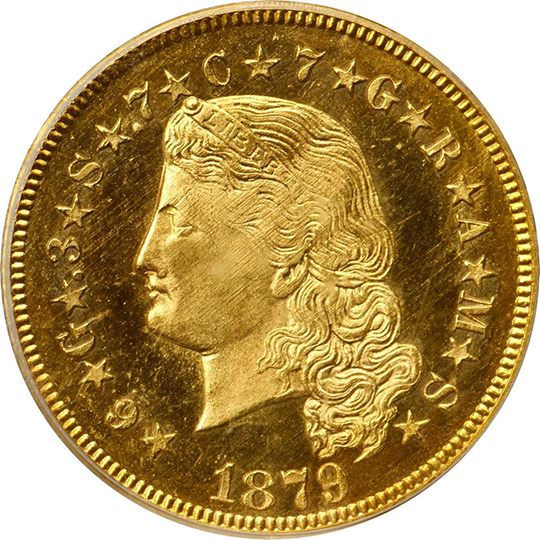 Coin World says: “Bringing $188,000, an 1879 Flowing Hair gold $4 Stella pattern piece in its original box, a coin that had been off the market since the 1950s… was a top lot at the auctions… by Stack’s Bowers Galleries.”

As for the coin’s allure, Brian Kendrella, president of Stack’s Bowers Galleries, said: “The Stella represents an attempt to integrate the world’s money as one. We still haven’t been able to do this even today but this coin represents the closest we likely ever came.”

A timely message — albeit a scary one today — particularly in light of Dave’s de-dollarization issue yesterday.

“You nailed it,” says a longtime reader about Friday’s repo market update. “This is unfrickenbelievable!

“Since the lows in August, the Federal Reserve’s ‘repo rescue’ activities have blown up its balance sheet by $288 billion. Annualized, this would be $1.5 trillion. The scariest part is that they’re just getting warmed up.

“Zero transparency is still their standard operating procedure, of course. Fedspeak and jawboning are the theater they use to distract us.

“This whole repo thing reeks of a pre-bailout. Could a crisis be imminent? If so, we’ll be on the hook for it — and we can expect a bail-in next.

“As ever, the Fed’s real goals are to transfer our wealth to the private oligarchs who own it and to save the banks at all cost. They have been extraordinarily successful at these for more than a century.

“Their ‘dual mandate’ (price stability and low unemployment) is smoke and mirrors. They have foisted the ultimate stealth tax on us: inflation. They have also addicted us to debt, which is used to finance the bubbles. It is as ingenious as it is evil. So is their deception.

“The banksters’ actions speak much more clearly than their words. IMO they don’t get enough credit for how well they’re executing their war against savers.

“I keep coming back to a fundamental question: Why do we have a central bank? The Fed is unconstitutional and inherently fraudulent. Look at what we have to show for it:

“Thanks as always for the great work you and your team do!”

Its model portfolio more than DOUBLED the returns of the second-place trading service.

Here’s the full story on this strategy in an exclusive report available TODAY.