De-Dollarization: The Next Chapter

No, Russian President Vladimir Putin did not predict an imminent collapse of the U.S. dollar. At least we don’t think so. 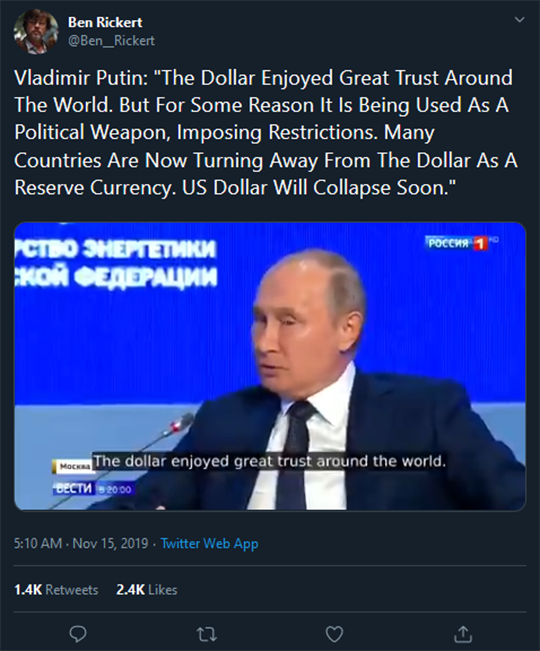 Near as we can tell, the video clip shown here is about six weeks old. Assuming the English-language subtitles are accurate, here’s what Putin said in 38 seconds…

The dollar enjoyed great trust around the world. It was almost the only universal currency in the world. For some reason, the U.S. began to use dollar settlements as a tool for political struggle, imposing restrictions on the use of the dollars. They began to bite the hand that feeds them. They’ll collapse soon.

Many countries in the world began turning away from using the dollar as a reserve currency. They restrict Iran in its dollar settlements. They impose some restrictions on Russia and other countries. This undermines confidence in the dollar. Isn’t it clear? They’re destroying the dollar with their own hands.

So the “they” that are doomed to collapse are the sanctions-mongers in Washington who’ve weaponized the dollar. Not the dollar itself.

And that’s assuming Putin even said it. We found a chunk of this extended quote in a story posted Oct. 2 on the website of RT — Russia’s state-run English-language news channel. The “collapse” part wasn’t there at all.

But you don’t have to buy into imminent “collapse” to know the rest of the world wants to get out from under the dollar’s thumb.

Last year, we witnessed the term going mainstream — with the publication of an opinion piece on CNBC’s website. Gal Luft from the Institute for the Analysis of Global Security wrote the U.S. government is “waging economic warfare against one-tenth of the world’s countries…

“These include Russia, Iran, Venezuela, Cuba, Sudan, Zimbabwe, Myanmar, the Democratic Republic of the Congo, North Korea and others on which Washington has imposed sanctions over the years, but also countries like China, Pakistan and Turkey, which are not under full sanctions but rather targets of other punitive economic measures.”

These nations combined make up a quarter of the globe’s population and they equal America’s economic output.

Together, they seek to “[join] forces to create a parallel financial system which would be out of reach of America’s long arm,” Luft wrote.

For now, 58% of all foreign exchange reserves in the world are still in the U.S. dollar. And about 40% of the world’s debt is dollar-denominated.

So de-dollarization is a slow-moving beast. But we think it will prove to be the financial story of our age.

“Beijing is silently diversifying its reserves to reduce its dependence on the world’s largest reserve currency,” says an article CNBC posted on Sunday.

It cites a report from ANZ Research. The report says the U.S.-China trade war has “increased the risk of a financial decoupling…

“Although China still allocates a high share of its foreign exchange reserves to the U.S. dollar… the pace of diversification into other currencies will likely quicken going forward.”

Meanwhile, the Chinese central bank continues to cut its holdings of U.S. Treasuries… and grow its holdings of gold. Beijing is also pouring money into less traditional investments — including loans for its proposed “Belt and Road” network of railroads, ports, pipelines and so on connecting China to Central Asia and Europe.

Meanwhile, the so-called BRICS countries are looking to conduct even more trade in their own currencies instead of dollars.

The BRICS include Russia and China, along with three countries not targeted by U.S. economic warfare — Brazil, India and South Africa. A Russian official laid out the plan last week in conjunction with a BRICS summit in Brasilia.

“An efficient BRICS payment system can encourage payments in national currencies and ensure sustainable payments and investments among our countries, which make up over 20% of the global inflow of foreign direct investment,” said Kirill Dmitriev, the head of the Russian Direct Investment Fund and a member of the BRICS Business Council.

The details remain hazy but as we’ve said several times this year, Russia is keen to develop an alternative to the U.S.-dominated SWIFT payments network. Growing numbers of Russian individuals and businesses have been shut out of SWIFT under escalating U.S. sanctions.

While de-dollarization is an evolutionary, not revolutionary, process, it could spell good things for gold between now and next spring.

Goldman Sachs issued a report late last month. De-dollarization figures into its forecast of $1,600 gold by April. That would be a nice jump from this morning’s spot price of $1,469.

The report cites a laundry list of concerns that will drive gold higher — the trade war, impeachment, Brexit, Hong Kong. Then comes the clincher: “Combined with CB [central bank] gold purchases related to de-dollarization, we maintain our bullish gold target of $1600/toz.”

Central banks purchased a record amount of gold during the first half of this year in pursuit of de-dollarization. Those efforts continue here in the second half. You’d be well-served to follow their lead.

The market for new homes is heating back up, judging by this morning’s economic numbers.

Housing starts in October registered their strongest monthly showing since May of last year. And permits — a better indicator of future activity — are the strongest since the housing bubble in 2007. There’s strength in single-family homes as well as apartments and condos.

“We’re entering what has historically been a ‘golden’ six-month period for homebuilding stocks,” says our Zach Scheidt.

“Since 1999, homebuilder stocks have had incredible runs starting in November and ending at the end of April.” The average jump? 18.3%.

“And this six-month period will be one for the books. The Mortgage Bankers Association estimates that the total of new mortgages could top $2.06 trillion in 2019.

“In all, ‘8.3 million first-time homebuyers will enter the mortgage market between 2020 and 2022,’ according to TransUnion. It’s estimated to be the largest group of first-time buyers set to enter the market since the Great Recession.”

Zach likes D.R. Horton (DHI) in this space. The average selling price for its new construction is the lowest in the industry — under $300,000 — so its product is the most affordable for first-time buyers. “Before too long,” he tells us, “potential buyers will be looking for a bargain… and DHI will deliver.” 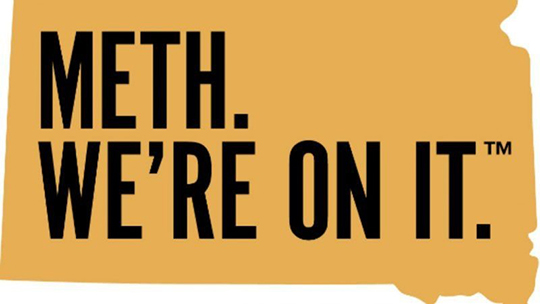 This is the South Dakota state government’s newest anti-drug campaign.

We digress a moment: In our own company, we know a thing or two about advertising — certainly the direct-marketing variety. One of the first things aspiring copywriters learn is to avoid puns; nine times out of 10 they’re a distraction from the message.

Anyway, we’re trying to figure out the number of people who thought this was a good idea.

But oh to be a fly on the wall during the creative sessions at Broadhead LLC — the Minneapolis ad agency that collected $448,914 of South Dakota taxpayer money for this campaign.

We’re not sure if that figure includes the fees for the lawyers who — get this — trademarked the slogan.

For the governor, however, it’s all good. “The whole point of this… campaign is to raise awareness,” she tweeted. “So I think that’s working.”

To the mailbag, and feedback on our single-topic deep state episode of The 5 yesterday…

“Not too long ago I wrote one of your sister publications and wondered how our institutions of lower education teach 1984 today, since they clearly use it as an instruction manual.

“Such things as censorship of opposing views and today’s version of Newspeak seem to use the book as a play-by-play manual. In fact, the whole concept of political correctness could probably trace its roots there if you dug deep enough. I hadn’t intended for my earlier question to be quite so ironic!”

“I’ve enjoyed reading The 5 for a number of years…

“… but as it continues to harp on the ‘Deep State’ and extol the virtues of Donald Trump I find it a less than useful read.

“When my party embraced Sarah Palin I was concerned. Under Trump I find I can no longer consider it my party. I had a 22-year military career and consider Trump to be, at minimum, a hazard to the nation. I agree with a couple of his initiatives (China policy being one) but that does not offset his negative qualities.

“I hope to continue gleaning good financial and investment guidance from Agora but I’ve had enough of the political posturing from The 5.

“I wish you well, but I will no longer waste 5 minutes of my day.”

The 5: You should meet up sometime with the fellow who keeps telling us, “You’re continually denigrating President Trump, his agenda and appointees.”

Moving on mercifully to a reader email touching on a topic from last week, the new Bring Our Troops Home movement…

“As a GWOT (global war on terrorism) vet that left instead of deploying (my contract was up for renewal) I find it difficult to understand how recruitment is filled except by desperation.

“To have officers politically lobbying for almost anything except gear, rations or training ought to be criminal (under the Uniform Code of Military Justice) and if any can be proven to have taken a political stand, they need to be tried, convicted and sentenced (there are worse punishments than just jail) and then prosecuted as unregistered lobbyists on the civilian side to serve time after release from military justice.”

The 5: As long as you brought it up, we should follow up on the Bring Our Troops Home event in Washington last Wednesday.

As we noted before, it was inevitably overshadowed by the first day of public impeachment hearings.

A firsthand account from retired Army Maj. Danny Sjursen, who did combat tours in Iraq and Afghanistan:

Here were decorated veterans, who’d done all the nation asked of them, prepared to oppose the endless wars crippling this ostensible democracy, and all the political and media class cared about was the aimless Ukraine-gate affair, a partisan parody almost certain to amount to nothing. As such, most of us received audiences of staffers rather than the legislators themselves. 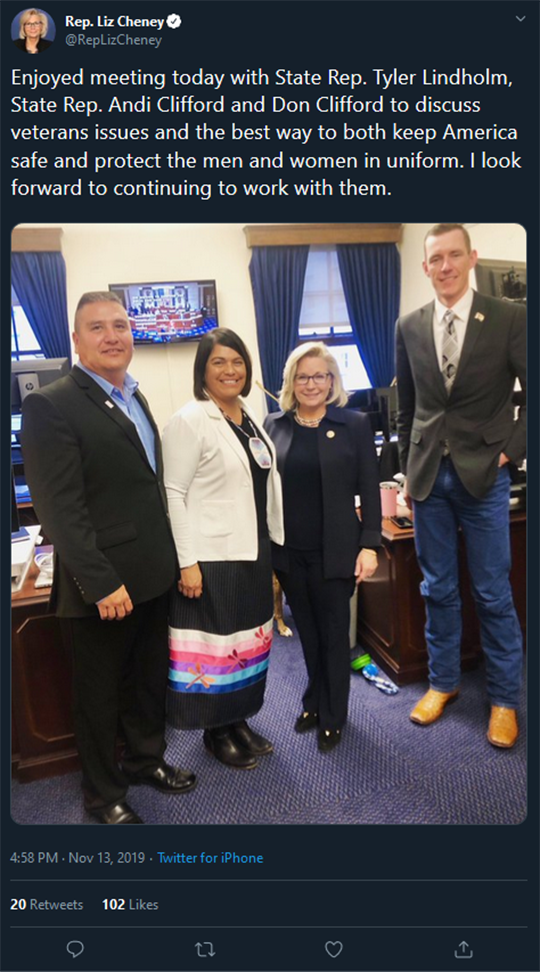 There’s chatter in Wyoming that Lindholm might challenge Cheney in the primaries next year. Now, that could be interesting to watch…

We’re withholding the name of the company because Ray told readers to sell only one-third of their position… and let the rest ride for even more gains.

Don’t worry if you missed out. Ray says he has an even more attractive opportunity right here.