The Single Asset This Pro Will Buy

“These days, I feel like there’s only one trading instrument that’s worth my time and money,” says Alan Knuckman, our eyes and ears at the CBOE.

In his 25-year career, Alan says he’s traded it all. You name it: stocks, bonds, futures and even penny stocks. But for Alan’s money, the risk-to-reward ratio from traditional trades just isn’t there.

Instead, Alan prefers to wring out triple-digit gains from the options market. “And if you’re not trading these powerful moneymakers yourself, you’re letting piles of cash slip past you.”

That should change today…

“With the right options,” says Alan, “you can make money whether a stock is going up or down!”

While the options Alan recommends are tied to specific stocks, he says, “They often cost a fraction of what you’d pay for a stock — giving you virtually the same exposure to a particular company’s ups and downs without forking over thousands of dollars.”

“And thanks to those low prices, options can deliver exponential returns,” Alan says. “That’s because options give you leverage — meaning they magnify even small price moves in a stock into giant gains.

“In fact, I regularly pull 100% returns (or more) on my options plays because of that low-price leverage,” he says.

Here’s an example: In mid-September, Google stock rose $11.50 in one day, translating to about a 0.94% return. Nothing to write home about…

“Or you could have spent 15 cents on a Google option, ending the day 807% richer.

This is a real-world example — Alan’s not being hyperbolic. “These are actual numbers,” he says, “involving one of the largest companies on the planet.

“Starting to see why I stopped trading stocks and haven’t looked back?”

Alan says: “Options are quite simply the best assets to trade — giving you the power to build an enviable amount of wealth in very little time.

“Just imagine how the colossal 806.67% returns I just illustrated could help you catch up on your nest egg.

“As much as I love telling you about incredible stock opportunities,” says Alan, “I also feel like I’m not being true to myself by avoiding bringing you options recommendations.”

To that end, Alan wants to ease any of your concerns and help you understand…

[Ed. note: If you’re interested in learning more about how to trade options — or maybe you’re still a little skittish — you should know…

With a heckuva track record so far: In a little over four months, they’ve walked subscribers through 17 trades with 15 winners.

So if you want in on the action, click here for Dave’s urgent market announcement regarding options on Monday, Nov. 18.]

Just for kicks on this Friday afternoon, we learned this week about the wrong way to get into options trading.

Members of a Reddit forum called “wallstreetbets” identified a way to bilk the Robinhood trading app Monday, calling a glitch in the system an “infinite money cheat code.” 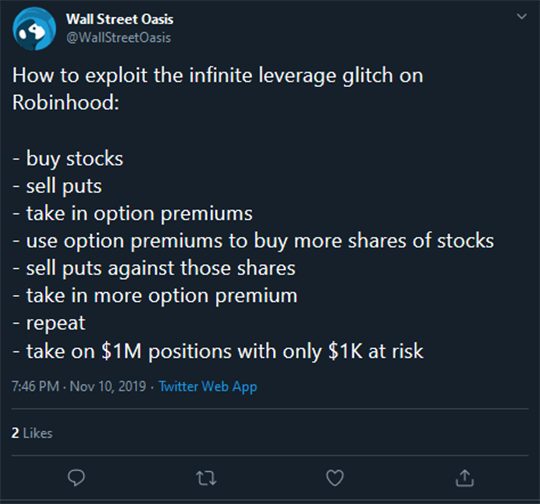 The long and short? “The app [was] incorrectly adding the value of the options to the user’s original cash on hand, allowing them to borrow larger and larger amounts, with apparently no limit,” MarketWatch reports.

It bears repeating: “DON’T DO THIS”: A spokesperson for Robinhood said, “We recently identified a small number of accounts engaging in problematic trading activity on our platform.”

She goes on to say Robinhood’s closed the loophole; meanwhile, those who abused the system might be in hot water with the SEC.

Retail sales — the Commerce Department’s measure of purchases at stores, restaurants and online — rose a seasonally adjusted 0.3% in October from a month earlier.

The measure got a boost from auto sales and higher gas prices; Americans, however, weren’t plunking down cash (or credit, more like) for big-ticket household items or clothing… which doesn’t bode well for the holiday shopping season.

To the markets, where the Dow’s rallied 150 points today on word — get this — that the U.S. and China are *this close* to a trade deal… Sound familiar?

Return of the JEDI: Just when you thought you’d heard the last of the Pentagon’s $10 billion contract, this thing is playing out like the eponymous film franchise. Never-ending…

AWS CEO Andy Jassy says the federal filing is meant to “push the government to shine a light on what really happened.”

Jassy says: “I think when you have a sitting president who’s willing to publicly show his disdain for a company and the leader of a company, it’s very difficult for government agencies including the DoD to make an objective decision without fear of reprisal.”

GATA reports: “If you want to know which investment houses have been getting the infamous ‘repo’ loans from the Federal Reserve Bank of New York in recent weeks… you’ll have to wait two years, according to a letter received from the bank today in response to GATA’s request for the information.” (Emphasis added.)

The reason given? Spelled out in a letter signed by Corporate Secretary Shawn Elizabeth Phillips — bank protections under the Dodd-Frank Wall Street Reform and Consumer Protection Act.

GATA concludes with this rhetorical flourish: “What kind of system of government is it when every week an entity created by ordinary legislation can create enormous amounts of a nation’s currency and disburse it to unidentified parties without any oversight by the people’s elected representatives, news organizations and ordinary citizens?”

We’ll leave you to fill in the blank…

“Interesting piece on the success (?) of socialism in Sweden,” a reader comments on Dave’ssingle-topic episode of The 5 yesterday.

“Only a couple [reasons]… why copying their system might not work. How much of the total GDP of Sweden does the government spend on the Department of Defense (our war machine)? And how much are the politicians allowed to spend in relation to government income?

“Might be a bit of a difference between us and them in those regards.

“But I am not going to hold my breath.”

On Aug. 31, the Swedish government announced plans to spend $2 billion more on defense, bumping spending up to 1.5% of the country’s GDP by 2025. Where will that extra money come from? A bank tax that will be levied, purportedly starting in 2022.

Exactly how the tax will be structured, at this point, is anyone’s guess.

“Is there any way that we aren’t ALREADY socialist? Nobody is proposing to have bureaucrats redesign the iPhone, but in so much else, the train has already left the station.”

And a longtime friend of The 5 says a little goes a long way: “Dave, I am deathly afraid of a little socialism. I have learned from history what that means: the starter-kit version for a lot of socialism.

“If Nordic countries are the model to follow, then why did they (a) first become prosperous and successful via free-market capitalism, (b) allow their politicians and bureaucrats to muck it up with socialist policies and (c) start dialing those back once they realized how badly they had blundered?

“Perhaps this is why the Nordic nations now have stronger protections of property rights and exert less control over private enterprise than America. No wonder our radical leftists’ proposals look nothing like theirs.

“In any case, we could repeat the process. But that’s costly. Or we could allow socialism to run its full course. But that’s deadly. It’s an ideology that has been energetically practiced by history’s most evil despots and resulted in widespread misery, murder and poverty.

“Regarding ‘democratic socialism,’ I’m confused about what this term means. It has to be the mother of all oxymorons — and makes about as much sense as ‘tyrannical liberty.’

“I share your biggest fear: If ‘American-style’ socialists get their way, we will end up with the worst of all worlds.

“Socialism ruins societies and economies. It’s the polar opposite of decentralized government and competitive capitalism. It’s the lie used to bamboozle people onto a path toward concentrated power and wealth.

“Statists benefit from that but citizens always pay a terrible price.”

P.S. In just one minute and 21 seconds, Dave blows the lid off the BIGGEST story on Wall Street this decade.

Giving YOU the chance to take home the largest payday of your life… starting this coming Monday.

For access to research driven by a better and more powerful system than ever before, click here… before the offer expires Monday, Nov. 18.