The $4 Trillion Ball and Chain

Culture clash: The 11th day of the 11th month has come to mean very different things in different parts of the world.

In many Western nations, this is Armistice Day — marking the end of the staggeringly bloody First World War 101 years ago today. It’s a national holiday in France. In the United Kingdom, Canada, Australia and New Zealand it’s known as Remembrance Day.

Here in the United States the original meaning has been corrupted — becoming Veterans Day under an act of Congress in 1954.

“Armistice Day, as the holiday was long known, was about so much more than vacuous ‘thanks’ for veterans,” writes retired Army major and West Point history instructor Danny Sjursen. “That day was sacred to those who fought it, and those who opposed it, alike.” 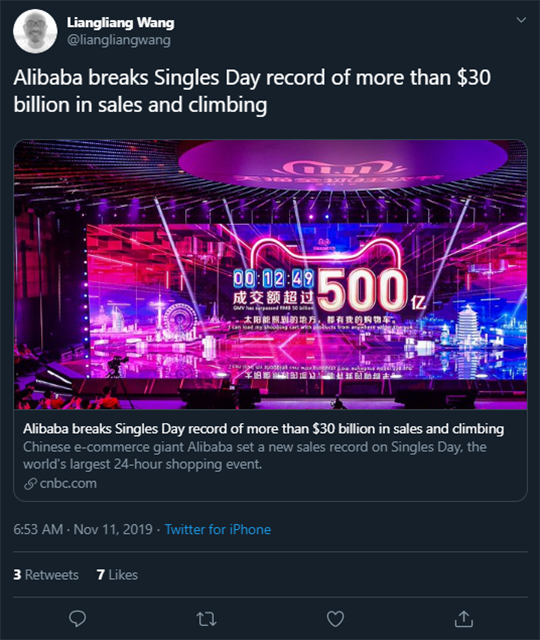 Singles Day is the creation of Alibaba — the biggest e-commerce company in the world, sometimes described as a mashup of Amazon and eBay. It listed on the NYSE in 2014 under the ticker BABA.

When launched in 2009, Alibaba touted Singles Day a revolt of sorts against Valentine’s Day — a day when the unmarried and/or unattached could splurge on themselves. The company settled on the date 11/11 because of all those ones in it.

In the decade since, Singles Day has turned into a spend-a-palooza for everyone no matter their marital status. “It is now the world’s biggest online sales event,” the BBC tells us, “and last year’s total sales exceeded Black Friday and Cyber Monday’s sales combined.” The hunt for bargains is all-consuming. “I feel so addicted,” a young woman in Shenzhen tells The Wall Street Journal.

This year’s version — it’s now a 24-hour extravaganza — began with a gala featuring Taylor Swift. It ended at midday on the U.S. East Coast with sales totaling $38.3 billion, crushing last year’s record. (That said, the pace of year-over-year growth is slowing.)

Meanwhile back in these United States, the mighty American consumer is starting to run out of gas. Emphasis on “starting.”

“If the U.S. economy has a hero in 2019, it’s the American consumer,” says a recent Fortune article. In the third quarter, consumer spending totaled an annualized $14.7 trillion.

Indeed, consumer spending has driven the United States’ meager economic growth all year, as measured by GDP. “It was that American consumer strength that certainly helped to offset the subsequent falls in both corporate spending and net exports that are largely attributed to the ongoing U.S.-China trade wars,” says our ex-Wall Street bigwig Nomi Prins. “Companies everywhere are counting on that strength to persevere.”

Retailers especially are counting on that strength going into the holidays.

Unfortunately, that strength has been driven largely by debt.

This morning’s Wall Street Journal has a front-page article about the growing number of Americans with underwater car loans — owing more than the car is worth. In many cases, that’s because they traded in their old car before it was paid off, rolling over the balance into a new loan.

The Journal tells the story of a 40-year-old electrician who owes $45,000 on a Jeep Cherokee the dealer sold him for… $27,000. It also cites figures from the car-shopping site Edmunds: “Some 33% of people who traded in cars to buy new ones in the first nine months of 2019 had negative equity, compared with 28% five years ago and 19% a decade ago.”

With the consumer increasingly stretched, it might not be surprising that “consumer confidence is 2.6% lower than it was at this time last year,” Nomi goes on. Bad omen for holiday retail.

Nervousness is already showing up in the Federal Reserve’s Beige Book — a monthly survey of business conditions. “Retailers surveyed,” Nomi says, “reported their sales ranging from down 6% to up 2% versus last year, with a less optimistic outlook.

“The Fed survey said, ‘One retailer noted that while the upcoming holiday season may provide a boost, expectations were that sales growth for 2019 and into 2020 would be pretty flat.’”

Nomi’s worrisome conclusion: “If the U.S. consumer stops buying as much, we aren’t far away from a recession.”

Fortunately, you can recession-proof your portfolio with just one of Nomi’s trades based on a unique strategy she rolled out this summer, with great success for satisfied readers. The payouts could be a “modest” $5,500… or more than three times that total, depending.

And all of it within a single trading day.

Intrigued? Nomi walks you through her strategy, and a few sample trades, at this link.

The holiday notwithstanding, the stock market is open — and it’s headed down.

At last check the Nasdaq was down about a quarter percent, the S&P 500 a third of a percent and the Dow about four-tenths of a percent.

Gold is sinking further after last week’s smackdown, the bid $1,452 as we write. As our chart hound Greg Guenthner said more than a month ago, a tumble to $1,425 isn’t out of the question.

While protests in Hong Kong grab global headlines today, it’s the risk of trouble in mainland China that’s got our attention.

“China’s local governments face a record number of lawsuits for failing to pay their contractors,” reports the Financial Times, “as the country’s slowing economy puts a strain on public finances. The financial outlook has deteriorated so markedly that analysts have warned that there is a risk of social unrest.”

Many contractors are collecting IOUs in lieu of payment. How long can that go on?

“The surge in government defaulters could lead to a social crisis with workers taking to the street and protesting against official agencies,” says a Hong Kong-based academic. “That’s the worst-case scenario for Beijing.”

As our Jim Rickards has been reminding us for years, Chinese leaders dread the outbreak of “social unrest.”

“The study of Chinese history is the study of periodic collapse,” he wrote in his 2011 book Currency Wars. “In particular, the 140-year period from 1839–1979 was one of almost constant turmoil.”

That period began with the Opium Wars and ended with the Cultural Revolution. In between came the Boxer Rebellion, the Japanese invasion, the Great Leap Forward and many other upheavals. Little wonder Beijing was so quick to crack down at Tiananmen Square in 1989.

How might Beijing respond to this funding crisis for local governments? We don’t know, but we’ll be watching.

As long as we brought up Hong Kong… We’re more and more convinced Beijing will not crack down on Hong Kong, Tiananmen style.

In August we documented the ties between the protest leadership in Hong Kong and key institutions and people in Washington, D.C. We suggested Washington might be goading Beijing into a crackdown in hopes that a crackdown would turn China into a global pariah, at least for a while — as happened after Tiananmen.

Later we suggested Beijing wouldn’t take the bait because Hong Kong isn’t as important to China as it once was. In a recent Gloom, Boom & Doom Report, the estimable Marc Faber affirmed our suspicions. “In 1993,” he wrote, “Hong Kong accounted for 27% of China’s economy. Nowadays, it accounts for less than 3%.

“The relatively small size of Hong Kong’s economy may be the reason why China’s leadership has so far not intervened in the ongoing demonstrations/riots. The thinking in China could be: ‘Let Hong Kong destroy itself — we don’t really need it.’”

Turns out Uber founder Travis Kalanick was among the first people cashing out after the company’s so-called “lockup period.”

That’s the six-month window after a company goes public when insiders and early investors are restricted from selling. Uber’s window expired last Wednesday… and Kalanick was among the sellers. He dumped 20 million shares, although he still owns more than 75 million.

As we pointed out last week, Uber is blazing new trails in IPO madness because many pre-IPO investors are now sitting on paper losses in addition to post-IPO retail investors. Obviously, Kalanick, having been present at the creation, isn’t among them. (He was pushed out in 2017 after allegations of sexual harassment and discrimination.)

“While it’s unclear why Kalanick chose to sell his shares,” says CNBC, “he could use the money to help fund his new venture, CloudKitchens. According to its website, the startup plans to rent space to restaurateurs for delivery-based businesses.”

Among the early suckers — er, investors — for this surely doomed venture is Saudi Arabia’s sovereign wealth fund, which is also Uber’s fifth-largest shareholder.

Speaking of which, Kalanick’s successor just stepped in it, trying not to offend his Saudi sponsors.

Asked about the kingdom’s murder and dismemberment of dissident journalist Jamal Khashoggi a year ago, Uber CEO Dara Khosrowshahi told the Axios on HBO TV show, “It’s a serious mistake.”

“We’ve made mistakes too, right? With self-driving, and we stopped driving and we’re recovering from that mistake. So I think that people make mistakes, it doesn’t mean that they can never be forgiven. I think they have taken it seriously.”

Of course, Khosrowshahi issued a statement trying to “walk back” what he said. “I said something in the moment that I do not believe. When it comes to Jamal Khashoggi, his murder was reprehensible and should not be forgotten or excused.”

The mind boggles at how many lawyers and PR consultants it took to ghost-write two sentences expressing, you know, basic decency and humanity…

“I have been looking into all the buyback news and I did some research that led me to some thought-provoking questions,” writes a self-described “loyal reader.”

“When I look at the balance sheet of JPMorgan Chase it appears that all their buybacks are doing is moving shares from common shares outstanding to common shares primary issue and the total number of shares is staying the same.

“I am no accountant but that is how I read these balance sheets and I don’t believe that JPM is doing a true buyback, at least not one that I would trust from an investment perspective.

“Keep up the good fight.”

P.S. Imagine launching a trade shortly after the market opens… and selling before the market close… and doubling your money in the space of a few hours.

That’s the key to a revolutionary trading system developed this year by our former Wall Street insider Nomi Prins.

She’s eager to tell you more about these one-day wonders and how they work. Click here.