Beating Robots (at Their Own Game)

“Wall Street trading in stocks, bonds, foreign exchange and commodities… is dominated by robots,” Jim Rickards says. “The key to trading today is not outthinking another human, but outthinking a robot.”

(The 5’s reported extensively on robotrading, most recently Monday when a reader got a smidge cynical about the phenomenon.)

As for outthinking a robot, that’s not as difficult as it sounds, according to Jim. “The truth is that most robots are fairly dumb when it comes to trading decisions.”

To outsmart robotraders, then, you’ll have to do your share of analysis while understanding just how these bots are programmed. “Once… you grasp the robots’ limitations, you’re in a good position to beat the robots at their own game.”

So Jim delves into the trading floor evolution from the 1970s — when humans were firmly in control — to the 1990s when computers were used, by and large, as facilitators.

By the early 2000s, however, robots started calling the shots — a shift that’s progressively increased to the present. (Shades of robot overlords, you say?)

“This is not just a matter of automated order matching,” Jim emphasizes. “[Robots] are programmed to make buy and sell decisions on their own with no human intervention.”

Prompted by keywords, robots cull through enormous amounts of data, a task not even a team of humans could accomplish in the allotted time.

Here’s the truth: “Robots scan more material and act faster than humans,” Jim says, “but they are limited by their algorithms” (emphasis added).

In other words, robots have an Achilles’ heel (heh… if they had heels): “Robots are… taught to trade within ranges. This is the 21st-century version of the classic ‘Buy low, sell high’ formula,” he says.

“The same range-bound algorithms apply to stocks,” Jim says, “with the robots programmed to sell when the Dow Jones hits 27,000 and buy when it hits 25,000.

“The key is to understand how the robots are programmed, stick to your own fundamental analysis and beat the robots at their own game by anticipating pre-programmed turning points as well as those inflection points where the robots will fail to anticipate a breakout from the trading range. 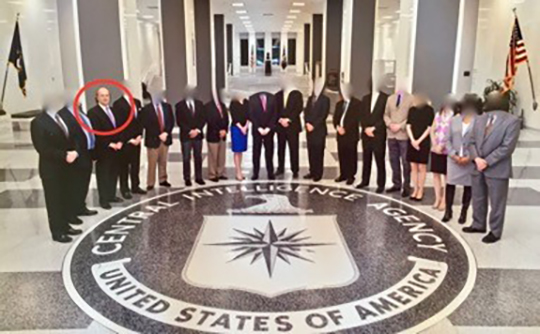 Jim Rickards and company [identities of other participants are obscured].

This group used applied mathematics along with third-wave AI — big data combined with deep learning — to detect a market quirk that gave them a 72-hour window to neutralize terrorist threats. Jim and his colleagues called their system Project Prophesy.

Now Jim’s using the same proprietary technology privately to give readers the best in macroeconomic forecasting and actionable trading recommendations.

Even better, the Project Prophesy system is quite easy to use. You can learn more about how it works at this link.]

The lockup period is a pre-established period of time for an IPO in which large stakeholders in particular — mostly company and bank execs — are restricted from selling shares.

“The expiration of the period sent a flood of shares onto the market, pushing the stock as low as $25.58, down 43% from its IPO price,” WSJ says.

And that’s business as usual for most IPOs… but “the loss of $2 billion from its market capitalization in 24 hours added injury to Uber after a lackluster earnings report this week.”

“Typically, the expiration of the lockup is highly anticipated, giving employees and early investors an opportunity to get cash for equity they have been sitting on.”

Well… the equity was all on paper for Uber’s early investors.

While The 5’s gone on record saying IPOs are usually a bad bet because by the time they go public, all the easy money’s been made.

In this case, even many of Uber’s pre-IPO investors — who were supposed to make out like bandits — are taking a bath!

Looking at Uber this morning, our analyst Greg Guenthner says: “Are buyers going to step in soon to stabilize this oversold stock? Or is this week’s ugly action the beginning of the end for the ride hailing pioneer?”

Maybe so… as the markets rally today.

The Dow’s reached another high-water mark — surging 250 points to 27,740 — on word Beijing and the Trump administration have agreed to roll back trade tariffs.

With that, Trump tweeted:

Sounding like a waiter when he serves up today’s special…

Today he highlights the “Electroceutical Revolution” that’s created “a unique modality for the treatment of cancer beyond traditional therapies — surgery, ionizing radiation and drugs, for instance.

“The process uses electrical fields as a way to selectively attack cancer cells,” Ray explains. “Cell DNA is sensitive to electrical fields, particularly during cell division, and this vulnerability allows the electroceutical devices to alter the electric field in the cell’s electrical charges.”

So far, according to clinical studies, the treatment option appears to be a promising advance in cancer treatment: “Patients who added an electroceutical device to their chemotherapy had a higher chance of living longer than those receiving chemotherapy alone,” says Ray.

“The developments in this technology are quite new and I’m still in the midst of significant research,” he adds. “As opportunity arises from this new path in cancer therapies, I’ll [have] more actionable ideas to profit on.”

Instead of reading the tea leaves when it comes to bitcoin’s performance, the snarky folks at Boing Boing noticed a correlation between the price of bitcoin… and avocados? 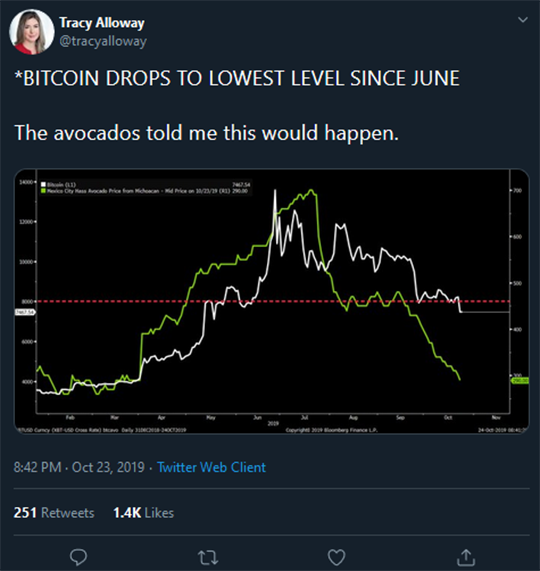 The price of bitcoin and avocados year to date.

The line tracking the price of avocados — in green, of course — doesn’t follow the price of bitcoin (in white) precisely but there’s some synchronicity there.

Boing Boing says: “This isn’t the first time someone has noticed the correlation, either. Back in April, the price[s] of both jumped 35%.”

“The avocados made sense — at the time, Trump had threatened to completely close the U.S.-Mexico border, which would have seriously diminished our access to those delicious Aztesticles.” (emphasis added… and millennials, amiright?)

Could this have any more of a Big Brother vibe? Pop impresario Pharrell Williams announced Tuesday he’s entering the residential real estate racket — er, market — in the most dystopian-esque way… 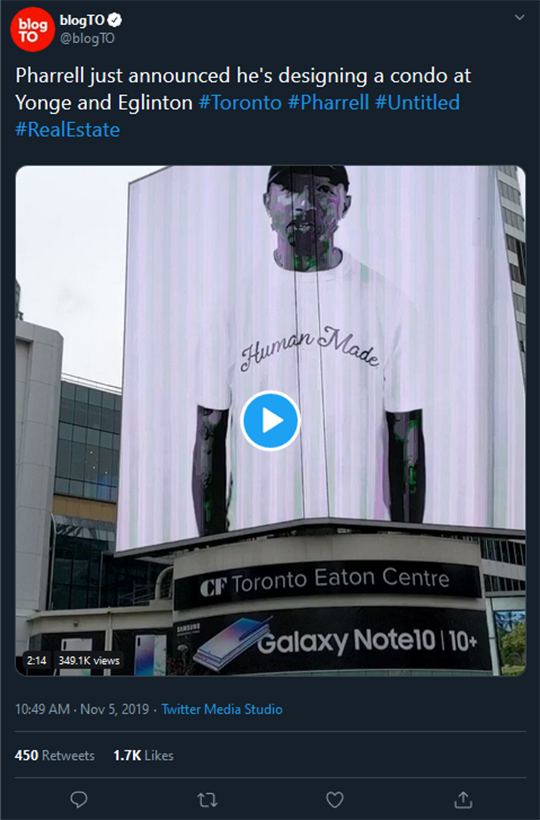 … with a talking billboard in the heart of Canada’s most populous city, Toronto.

The musician who brought us the 2014 hit song “Happy” — we actually liked it the first 112 times we heard it — is partnering with Reserve Properties and Westdale Properties to build two high-rise condo towers in the (clogged) heart of the city.

The billboard announcement had bystanders cheering in the streets (you can watch the video above)… which is more than a little jarring considering housing costs in Toronto have ratcheted up 6% since last year. To give you an idea, the average cost of a home in Toronto is now C$810,900, or US$616,325.

In response to the street-level celebration, one Twitter user @kaylaxcarter said: “For most Torontonians 74% of their monthly income goes to housing. Shelters are overcrowded. There is a 10-year waiting list for social housing. People are using food banks more than they have in decades.”

“I am so looking forward to a time when the notion of ‘late degenerate capitalism’ is ancient history — along with lots of other terms that are currently in vogue,” says a longtime friend of The 5 in response to Dave’s use of the phrase yesterday.

“Forget about the dustbin of history. When it comes to postmodern ideas that belong in the $#!+can, it’s hard to know where to begin. Central banking? Derangement syndrome? Everything bubble? Progressivism? Social justice?

“Really? Not long ago, these phrases weren’t just meaningless. They didn’t exist.

“Talk about a paradigm shift. We need a big one in the worst way. Perhaps one day these concepts (and more) will be on the scrap heap along with ‘Dark Ages.’ But we’re not there yet.

The 5: We’ll give you the term “late degenerate capitalism” has a definite shelf life… but *gulp* we happen to stand by Dark Ages as one descriptor that doesn’t belong in history’s “circular file.”

P.S. It’s not the title of a John le Carré novel… instead, Project Prophesy is a system that predicts the twists and turns of the market so Main Street investors make money like Wall Street insiders. Want in? Click here for the pertinent details.