“The scale of what JPMorgan is doing is mind-boggling,” says the anonymous quotation in this morning’s Financial Times. The remark is attributed to “an executive at a large institutional investor.”

What the executive is referring to is the fact JPM is making fewer loans these days… and buying more bonds instead. The salmon-colored rag calls it “a major shift in how the largest U.S. bank by assets manages its enormous balance sheet.

“The moves, which have seen the bank’s bond portfolio increase by 50%, are prompted by capital rules that treat loans as riskier than bonds. As it continues to return billions of dollars to shareholders in dividends and share buybacks each year, JPMorgan has less room than some rivals to hold riskier assets.”

There’s an element to the FT’s story that’s conspicuous by its absence. It’s up to us to add the critical context, and it comes back to the funding crisis in the “repo” market.

“What caused the overnight lending market to unexpectedly seize up in September? There’s good reason to believe JPMorgan Chase may have been at the heart of it.”

“JPMorgan Chase is the largest bank in the U.S. and has about $1.6 trillion in deposits,” she explains. “It’s one of the big banks that provide much of the loans in the overnight money markets.”

JPM’s “major shift” in its balance sheet coincided with a massive share buyback from January through September of this year.

“According to the SEC, JPM has spent about $77 billion on buybacks since 2013,” says Nomi.

“But the money JPMorgan Chase used for buybacks on its most recent buyback binge was therefore unavailable to be loaned out in the repo market,” she explains.

It’s right there in the bank’s annual SEC filing, albeit layered in jargon: “In 2019, cash provided resulted from higher deposits and securities loaned or sold under repurchase agreements, partially offset by net payments on long-term borrowing…cash was used for repurchases of common stock and cash dividends on common and preferred stock.”

No one in the establishment financial media picked up on the connection. It was left to the Wall Street on Parade website, which sums up the situation thus: “Had JPMorgan Chase not spent $77 billion propping up its share price with stock buybacks, it would have $77 billion more in cash to loan to businesses and consumers — the actual job of its commercial bank.

Ah, yes, the Fed. “JPM’s diversion of money likely contributed to the liquidity crunch,” says Nomi, “which forced the Fed to intervene in order to make up the difference.”

The Fed’s rescue of the repo market began on Sept. 16. As of last Wednesday — the numbers are updated weekly — the effort has blown up the Fed’s balance sheet by $250 billion, past the $4 trillion mark. 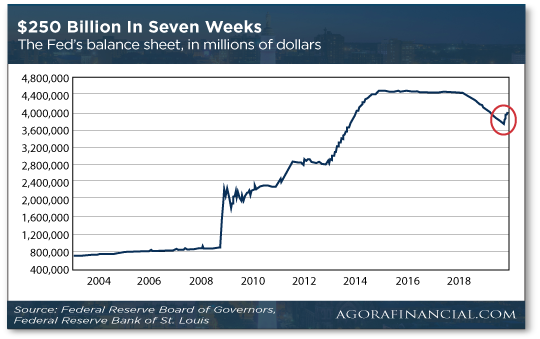 As we pointed out a few weeks ago, the steepness of the climb these last seven weeks has no precedent since the waning days of the 2007–09 financial crisis.

Back then, the justification for “quantitative easing” was, as Nomi reminds us, “so that banks could ostensibly lend money more easily to Main Street and stimulate the economy.”

Which didn’t happen. The post-2008 economic “recovery” is the weakest on record. Instead, the money found its way into financial assets. “Much of the excess money,” Nomi says, “went straight to big banks like JPM, rich investors and speculators. They then used it to invest in the stock and bond markets, but not in things that would matter to all the Americans outside that great wall of wealth.”

And now the Fed’s “stimulus” efforts of 2008–2014 are on again. We’re told they’ll continue well into next year — after we were first promised in mid-September it would be a one-shot deal.

If you’re JPMorgan Chase CEO Jamie Dimon — the only too-big-to-fail CEO from 2008 who’s still on the job today — it’s all good. Maybe you don’t have the “fortress balance sheet” you once boasted about, but you can still send out tone-deaf Christmas cards loaded with panoramic photos of the fam having holiday fun, like the one he did in 2013…

You mean, your Christmas cards don’t look like this?

Luckily for you, Nomi has hit on a trading strategy — accessible to everyday folks like you “outside that great wall of wealth” — that gives you the chance to even the score a bit. We’re talking payouts of up to $17,750 in less than 24 hours.

You have to be nimble, so this strategy might not be for everyone. Check out Nomi’s presentation at this link and decide if it’s for you.

As long as we’re talking about too big to fail, let’s extend that to too big to jail.

That was the Obama administration’s policy post-2008. Asked in 2013 why no criminal cases had been brought against the big banks, Attorney General Eric Holder told Congress, “I am concerned that the size of some of these institutions becomes so large that it does become difficult for us to prosecute them when we are hit with indications that if you do prosecute, if you do bring a criminal charge, it will have a negative impact on the national economy, perhaps even the world economy.”

After leaving the post in 2015, Holder returned to the white-shoe law firm from whence he came — whose clients include most of the big banks.

Fast-forward to the present and it appears the Trump administration has adopted a too-big-to-jail stance toward a company outside the financial sector.

This morning’s Wall Street Journal tells us that “federal prosecutors would face a daunting challenge in mounting a criminal case against Boeing Co. or its employees, legal experts said, even with evidence showing workers sounded alarms about the 737 Max’s safety and a company pilot’s chat messages suggesting he misled regulators.”

There’s a lot of legal mumbo jumbo in there about the difficulty of proving a criminal case, but here’s the real tell…

A corporate indictment and potentially huge sanctions must be balanced against the economic and national-security risks of incapacitating the country’s second-biggest defense contractor behind Lockheed Martin Corp.

Boeing’s defense division backlog stood at $62 billion as of Sept. 30, much of that reflecting U.S. orders.

“The government can’t lose a company like Boeing as a defense contractor,” said Brandon Garrett, a Duke University law professor.

Which reminds us about one account of how Boeing got into such a mess.

According to this telling, there was a time when Boeing strictly segregated the military and civilian sides of the company.

As Andrew Cockburn wrote this summer in Harper’s, “Senior management reportedly enforced an unwritten rule that managers from the defense side should never be transferred to the civilian arm, lest they infect it with their culture of cost overruns, schedule slippage and risky or unfeasible technical initiatives.”

That division was swept away when Boeing merged with McDonnell Douglas in 1997 and McDonnell’s CEO took over the combined company. Thus two of Boeing’s major initiatives in civilian aircraft the last 20 years — the 787 Dreamliner, and now the 737 Max — have been star-crossed affairs. (Patrick Shanahan, the ex-Boeing exec who was acting secretary of defense for a while this year? He had a huge hand in the 737 Max.)

In any event, the “economic and national security risks” of prosecuting Boeing are overblown. It’s not as if the factories and patents would vanish into thin air; they’d pass into the hands of more competent and responsible ownership and/or management. Would that be so awful?

The Dow is finally playing catch-up with the other major U.S. stock indexes, and entering record territory.

For the record: The national debt surpassed $23 trillion as of last Thursday.

“Reaching $23 trillion in debt on Halloween is a scary milestone for our economy and the next generation, but Washington shows no fear,” says Michael Peterson, CEO of the Peter G. Peterson Foundation. “Piling on debt like this is especially unwise and unnecessary in a strong economy.”

We have nothing to add…

Once again our 5 Mins. are nearly up and we’re lacking for quality financial quirk today.

But once again the business page at Fark comes to the rescue: “There’s a millennial credit card start up named ‘Deserve.’ You can’t say the marketing department didn’t nail this one.”

Heh… and it turns out Goldman Sachs is the lead investor in the venture.

To the mailbag: “I read Friday’s 5 and thought of a back issue regarding the influence of robot-trading in the markets.

“The trade deal doesn’t have to be finalized. There just has to be a news article or tweet hinting of the same and after the robot-traders react, then an opportunity to exit any call options becomes available.

The 5: You have a better memory than we do!

The reader takes us back two years — to a day when the Dow Jones Newswires published a manifestly bogus story about Google buying Apple for the bargain-basement price of $9 billion. (At the time, AAPL’s market cap was $800 billion.)

Basically, Dow Jones’ IT people were conducting some in-house tests and worked up a fake story because they were bored… and it accidentally went out over the wire. The robo-traders took their cues from the keywords in the article, and AAPL’s share price jumped a couple of bucks for a few brief moments before settling back to normal.

“On Thursday, Dave referred to the Brexit vote in Great Britain,” writes a reader from across the pond.

“Of course the Brexit vote took place in the whole U.K., not just Great Britain, the main difference being that Great Britain doesn’t include Northern Ireland.

“It’s common to see American literature conflate G.B., U.K. and even just England, but you guys should rise above that.”

The 5: You are absolutely right. It is, after all, the “United Kingdom of Great Britain and Northern Ireland”… and it’s the border between Northern Ireland and the Republic of Ireland that’s been such a thorny issue in London’s negotiations with the EU.

We shall be less careless “in future” — as you’re wont to say over there!

P.S. No one knows better than our Nomi Prins about how the system is rigged. She was an insider at several of the leading investment banks.

But recently she “went rogue” with a trading system that could double your money in a single trading day.

For real. She broke down the results for us recently: “My readers could have cashed out at 1,340% peak gains as a result. Multiply those returns over a year, five years, 10 years and you can see why you can take control of your retirement. The sooner you start, the better.”

Where can you get started? Right here.