The Federal Reserve is due to issue its every-six-weeks “policy statement” today, about the time this episode of The 5 hits your inbox. Barring any surprises, the Fed will cut its benchmark fed funds rate for the third time since July.

Oy… Just when it seemed as if interest rates were finally climbing up from the floor, they’re slouching back down… 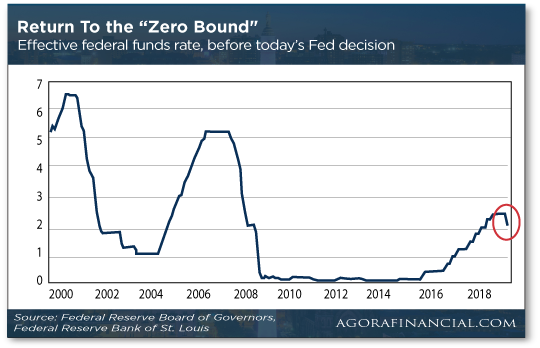 “Many retirees are being told that they simply have to make do with less,” Zach goes on, “because lower interest rates make it harder for you to collect reliable income from traditional places like savings accounts, Treasury bonds and even some blue chip dividend stocks.”

But what about a non-traditional place? And we’re not talking about anything crazy risky, either. Zach says you can “actually use the low interest rates to your advantage!”

For a long time, the government has been giving companies incentives to invest in real estate of all types. The most powerful incentive of all? Avoiding income tax.

Thus, “in exchange for avoiding corporate tax,” Zach explains, “REITs are required to pay at least 90% of their income to shareholders each year.

“REITs are able to generate bigger profits than other companies because they don't have to pay any corporate tax. And once the larger profits are generated, the vast majority of those profits are handed to us as investors through dividend payments. It's the perfect setup for retirees to generate reliable income quarter after quarter!”

Maybe you’re already familiar with REITs. But Zach says there are two hidden reasons to jump on REITs right now.

One of the Fed’s motives for cutting rates is to encourage businesses to borrow money that they’ll invest in their future growth.

That’s a debatable proposition — we won’t get into the reasons today — but in the case of REITs, it totally works. “Thanks to low interest rates,” Zach says, “REITs can borrow money and use that money to invest in new real estate plays. These plays can cover opportunities like:

“Thanks to lower interest rates, REITs can borrow money at cheap prices to build or purchase additional facilities. And then as these facilities come online and start generating extra income, you can expect to get bigger income checks in future quarters!”

The other reason Zach says now’s the time to pounce is the “reach for yield.”

“This term,” he explains, “simply means that investors who would typically invest in Treasury bonds or put their money into savings accounts are now being forced to ‘reach’ into other areas of the market.

“The ‘reach for yield’ effectively drives prices of other income plays higher. Because with more investors buying shares, the demand naturally causes prices to rise.”

This is a good news-bad news situation, says Zach: “The good news is that if you buy today, higher prices will help you as more investors move into this lucrative area of the market.

“The bad news is that if you wait to put your capital to work, you'll likely wind up paying much more for each REIT share you want to purchase.” You’ll still collect the income, but your rate of return will be lower.

So it pays to move now. “You'll ensure that you're able to start collecting checks as soon as the next one is issued by these companies,” Zach concludes. “And you'll also put yourself in a great spot to profit as other investors follow your lead and drive the shares of your REIT investments higher.”

[Ed. note: Zach recently spotted a REIT with the potential to generate not only steady income but a staggering capital gain. That’s because his research says it’s a takeover target.

For a limited time only, we’re extending a special offer for membership in Zach’s Buyout Millionaires Club — where you can seize on this and many other lucrative merger-and-acquisition opportunities. Check out Zach’s exclusive invitation at this link.]

As usual on these days eight times a year, markets are treading water ahead of whatever the Fed will announce.

The major U.S. stock indexes are ruler-flat, the S&P 500 off less than a point from yesterday’s close and less than four points from Tuesday’s record close. Gold is steady at $1,491. Crude hovers around $55 a barrel.

The big economic number today is the Commerce Department’s first guess at third-quarter GDP… and it’s a very mixed bag.

On the one hand, it came in better than expected — growing at an annualized 1.9%. On the other hand, that rate is below the 2.2% norm for the last decade — which is itself below the 3.2% par for the post-World War II era.

The big drag on the number is business investment — which has been shrinking for two straight quarters. But consumer spending, the biggest component of the overall number, remains strong.

The fact the number came in better than expected will do nothing to alter the Fed’s course of action today; the futures market is betting on a 100% probability of a rate cut this afternoon.

The only drama is whether the Fed will leave the door to open another cut in mid-December… or draw the line at three cuts in three straight meetings. We’ll follow up tomorrow…

While gold oscillates around $1,500, another precious metal is setting records.

Palladium briefly topped $1,800 yesterday and the day before — notching a 40% year-to-date jump.

On the demand side, the metal is critical to the pollution-control devices in cars and trucks, and air-quality rules worldwide are getting stricter. On the supply side, production is shrinking in South Africa (long story) and stalling in Russia. Those are the two big global producers.

"The palladium rally continues to breathe on the oxygen being provided by the strong combination of very tight fundamentals and strong bullish momentum," Ole Hansen of Denmark’s Saxo Bank tells Bloomberg.

The rally has probably gotten ahead of itself, so if you’re looking for a way to play the trend… look to palladium’s sister metal platinum. Platinum is also used for vehicles’ pollution control and the price remains stuck near four-year lows.

Our search for financial “quirk” of the sort usually found in this portion of our daily program comes up short today, except…

“Taco Bell to Give Away Free Doritos Locos Tacos on Wednesday. Water Treatment Plants All Across America Said to Be Bringing Extra Processing Capacity Online.”

“Taker states” remain a hot topic in the mailbag: “The federal money going back to ‘taker states’ is often a case of the feds sending money to themselves,” writes a reader from Idaho.

“The feds own half or more of the land in most Western states and pay fees in lieu of taxes on their holdings, and many of the nation's military facilities are located in the Southern states, all of which are federal enterprises receiving federal outlays.”

“I’m a retired Marine still sucking on the teat of the federal government in northern Virginia working as a federal contractor,” writes another reader.

“So I’m clearly part of the takers, at least on an individual basis. But I’m also from California and have seen how high labor rates and real estate costs have driven defense spending out of the state. Then add liberal politics when San Francisco Mayor Art Agnos cut off the homeporting of a battleship, leading to the shutdown of al naval facilities in the Bay Area.

“Why spend money in a state you are not welcome in?”

“From what I can see the ‘United’ States is on an irreversible decline,” writes a reader zooming out to the broader topic of how “taker state” rhetoric is sharpening political divisions.

“Economically we are flat broke while China, Russia and India are just about done putting the final touches on their version of SWIFT, another nail in the U.S. coffin. A recent poll says something like 67% of U.S. millennials prefer socialism.

“If we don't want a civil war with tens of thousands of civilians dead and the U.S. wrecked for the next 50-plus years, we have only one choice — divide the country up along political lines.

“I suggest that the state governors meet in a neutral country and figure out which states living next door to each other are willing are join together and form a new country. Once that's done then conservatives that live in New York state, for example, or socialists in Texas have five years to move to a new nation more politically agreeable to them.

“An estimated 17–22% consider themselves ‘somewhat libertarian’ and those people will take the states of Wyoming and Montana and name it the ‘Jefferson Republic.’”

The 5: We’re sympathetic to the notion of the United States breaking into smaller, more manageable polities… but your proposed process sounds an awful lot like the partition of India in 1947 — which led to something like a million dead and 10 million refugees. No, thanks.

“What ridiculous spew all this is,” writes one of our longtimers — a fellow who goes back almost to the beginning of this e-letter in 2007. For a long time he wrote us from Malaysia; now he’s in Canada.

“What a waste of time being divisive… try being a nation of people and supporting each other. One day you will need the support.”

The 5: We’re not trying to be divisive; we’re exploring the divisions that already exist and teasing out the implications.

We’re not happy about this state of affairs — more than once we’ve lamented the hyperpoliticized atmosphere of recent years — but we likewise can’t afford to ignore it.

Nor can we afford to ignore how we got here, because we’ve been chronicling it one way or another since 2007 — the relentless “extraction” of middle-class wealth by Wall Street/central banking, the health care cartel, higher education, the military-industrial complex and so on.

But the power elite has successfully channeled the outrage over that extraction into bull*** culture-war and identity-politics issues.

For the moment, conditions in these United States are still kinda-sorta prosperous, even if that prosperity is built on funny money at the macro level and consumer debt at the micro level. We cringe to think what happens when it all starts going sideways again…

P.S. It’s one of the biggest announcements we’ve made in our company’s 40-year history…

… but our publishers tell me it could go offline at any moment.

Give it a look right here while there’s still time.