Oil prices have leaped to their highest level so far in October — after the latest mysterious “incident” in the Persian Gulf region.

An explosion ripped through an Iranian oil tanker in the Red Sea; Iran’s government claims it was a missile strike.

At this early stage, who knows what really happened? (Friendly advice from this former media pro: Take everything you see in the first 24 hours of a breaking story like this with a grain of salt.) But the “fear premium” has pushed a barrel of West Texas Intermediate up to $54.15.

Ever since the first “incident” in May when four oil tankers came under attack at the entrance to the Strait of Hormuz, oil has traded in a range between $51–64 a barrel. 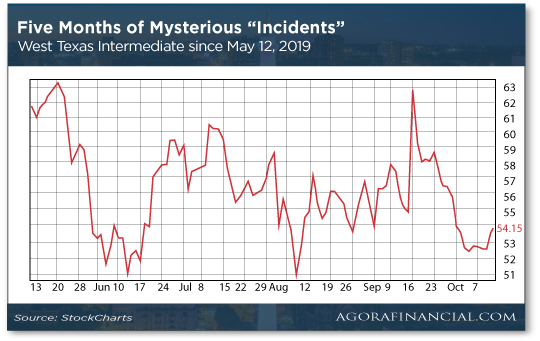 The big spike in mid-September was the attack on oil-processing facilities in Saudi Arabia. Then oil bottomed below $53 early this month and is now back on the upswing — affirmation of the “A-B-C” pattern our Zach Scheidt described in our virtual pages last week.

Another one of our experts says crude is going still higher from here.

“Our analysis is that oil is on the verge of a breakout to the upside,” says our macro maven Jim Rickards. “This is based on a number of factors.

“Central banks around the world are in a race to lower rates in an effort to counteract slowing global growth and recent disinflationary trends. Rate cuts will do little to stimulate growth, but they can change inflationary expectations.

“Monetary policy works with a lag. The rate cuts occurring now in Europe, China, Australia and the U.S. will produce at least mild inflation in 2020. That will give a boost to oil prices despite slower growth.”

And then there are the proverbial geopolitical tensions, as today’s jump reminds us. But there’s a knock-on effect few people talk about.

“Demand for oil, and therefore higher oil prices, will also be driven by the need for stockpiling,” Jim explains. “China and Japan produce relatively little oil and are heavily dependent on Saudi Arabian oil to run their economies. Any disruption in Saudi shipments to these countries would be extremely damaging.

“Both countries have begun to stockpile oil reserves as a counterweight to possible supply disruption in the near future. This is another floor under oil prices and creates an asymmetric trade where prices have the potential to spike higher but are unlikely to fall significantly.”

As we said last week, the easy way to play it is the Energy Select Sector SPDR ETF (XLE).

Jim recently recommended a more aggressive play to his paying subscribers. At the moment that trading service is not accepting new members, but we’ll let you know the moment new slots become available.

Elsewhere, markets are once more in knee-jerk reaction mode to trade war headlines.

“Good things are happening at China Trade Talk Meeting,” the president tweeted this morning ahead of his session with China’s vice premier this afternoon at 2:45 p.m. EDT.

Of course he might kick over the meeting table by the time the market closes at 4:00, but in the meantime the Dow is up nearly 400 points at 26,891. That’s less than 500 points below its record close in July.

Even media outlets that thrive on the constant stream of “news” can’t help notice the wacky market action this week. Bloomberg: “As noon struck Thursday amid the latest U.S.-China trade talks, the S&P 500 turned south for no apparent reason.

“It was a joke, but investors could be forgiven for thinking otherwise. While trade headlines have whipsawed markets for nearly two years, the heightened sensitivity this week has turned almost comical.”

No lie. The risk-on atmosphere this morning has also sent gold tumbling to $1,475.

The administration is weighing thousands of requests for tariff exemptions. That means “it unfortunately still takes the intervention of someone like us and a member of Congress calling to get out of the stack and get consideration,” say the principals of a lobbying firm called Winning Strategies Washington. The firm’s new clients include the ball cap manufacturer New Era Cap.

Been a while since we’ve had a chance to paraphrase Sarah Palin’s famous line, but here we go: How’s that swampy-drainy thing workin’ out fer ya?

Are you on Social Security? Don’t spend all your 2020 windfall in one place. Yes, we’re being facetious.

As noted here yesterday, the official year-over-year inflation rate is 1.7%. With that, the Social Security Administration has announced that next year’s COLA, or cost-of-living, adjustment will be 1.6%. (Why is it lower? Because Social Security relies on a different inflation gauge with the express aim of keeping a lid on the annual increases.)

For the average Social Security recipient, that works out to an increase of $32 a month. And for once, that increase won’t get eaten up by Medicare premium increases; the numbers aren’t final yet, but it appears the basic Part B premium will rise about $9 for 2020.

Of course, that’s for people who aren’t considered “high income.” If you bring in more than $85,000 a year ($170,000 for couples), you pay a surcharge under Medicare’s Marxist pricing scheme introduced by Bush 43. Your 2020 premium increase will be based on your 2018 income and it might well eat up all your Social Security increase and then some.

There’s a darker side to the farcical story of WeWork, spotlighted here on Wednesday.

If WeWork goes under, the blast zone won’t be limited to tens of billions in investor losses and 10,000 job cuts.

“WeWork has hundreds of large-scale prime leases in cities around the world,” says our Jim Rickards. “If WeWork goes bankrupt, those leases will be terminated, leaving building owners high and dry.

“Many of those owners undertook expensive remodeling to accommodate the WeWork business model. Those remodeling costs were expected to be spread over the life of 10-year leases, but if WeWork terminates the leases in bankruptcy, the remodeling costs will have to be written off immediately.

“This will put landlords in distress and lead to fire-sale pricing on some buildings and depressed commercial real estate values in general. This could also mean the end of pie-in-the-sky IPO valuations and a drying up of investment banking fees. The negative ripple effects will spread from there.”

It was a bust in commercial real estate that spread to the savings and loans in the late 1980s, ahead of the 1990–91 recession. Jim doesn’t see a recession on the immediate horizon… but whenever the next one materializes, WeWork might be its poster child…

The planned power outages in California could have a $2.5 billion economic impact — and none of it will come out of the hides of incompetent utility executives.

That $2.5 billion figure comes from Michael Wara of the Stanford Woods Institute for the Environment. He’s accounting for power cuts at both homes and small businesses — excluding big businesses that usually have backup plans.

Pacific Gas & Electric justifies the power cuts — as of this morning about 312,000 customers are still in the dark — as essential to prevent the spread of wildfires. Of course, if PG&E had hired more tree trimmers and fewer midlevel managers over the years, its customers wouldn’t be in this fix. Nor would PG&E be in bankruptcy court as a result of its liability for devastating fires last year and the year before.

The idiocy surrounding the outages has flown fast and furious this week.

Yesterday there was much tee-heeing online about how fossil fuel-hating Tesla owners found themselves up a creek if they didn’t charge their vehicles before the outages began. True enough, but gas pumps don’t run without electricity either. PG&E’s incompetence doesn’t discriminate based on one’s political orientation.

Meanwhile, what about the hundreds of thousands of gasoline-powered generators people have pressed into service? Don’t those pose at least as much of a fire risk? (Ah, but PG&E won’t bear any liability if a generator starts the next big fire…)

“I have always felt that this photo deserves a caption contest,” one of our regulars writes after we again invoked 2008’s terrible troika of Hank Paulson, Ben Bernanke and Tim Geithner.

The 5: It’s the panicked look on Paulson’s face that really makes it.

It totally captures the zeitgeist of that when he’d make some sort of announcement on Sunday afternoon before the Asian markets opened for the week, hoping to calm things down, but only making matters worse and the Dow would tank 300 more points the following morning. (And that’s when the Dow was only around 11,000 or so.)

“Thanks for the voting stats!” writes a grateful reader after we documented how 48.5% of the voting-age population opted out of choosing between Trump and Clinton.

“As a voter in category two — third party/independent — the plague of Trump derangement syndrome, in either direction, gives me little hope for our country.

“Orwell, Goering et al. were correct, and with massive media clout the people can be easily divided, and thus conquered. Add in devolved public education, ubiquitous media BS and spin and lost skills of logic and critical thinking and you have a nation of sheeple. Sigh.”

The 5: “The worst thing Donald Trump has done is he’s gotten people interested in politics again,” said Agora Financial’s fearless leader Addison Wiggin (he’s the founder of this e-letter, too) in 2017.

“The two hours that [O.J.] Simpson spent armed in that vehicle in 1994,” Engelhardt wrote last year, “would prove to be our first experience of the reality TV version of the ‘news’ in which we’re now immersed…

“Admittedly, Donald Trump is a hell of a story. And for a media filled with shrinking news staffs and desperate to find ways to hold onto or increase readership or viewership, he’s a godsend (as well as a monster). After all, his greatest skill — the one he’s spent a lifetime perfecting — is undoubtedly his unerring instinct for just how to attract the camera under more or less any circumstances.

“The result, however, is a picture of the world that’s deceptive in the extreme. These days, if you only watched TV and read mainstream papers, you would be excused for thinking that we were in a world of Donald Trump and little else. By now, he’s all but blotted out the sun itself.”

Around here we hew to Knuckman’s law, as proffered by our Chicago floor-trading veteran Alan Knuckman: Wait 48 hours before reacting to anything Trump says. Give events that much time to shake out.

P.S. Speaking of Alan Knuckman… Earnings season “officially” gets underway on Tuesday, but a handful of companies have already released their numbers. Alan tells us 21 of the S&P 500 stocks have reported… and 17 have beaten analysts’ estimates. And about half of those stocks gapped higher in response.

“It’s earnings facts that can send the price of a stock soaring,” says Alan, “not the latest Trump tweet.”

And if you want the ideal way to play earnings season — we’re talking gains of 1,110% as just an example — you need to check out Alan’s proven strategy at this link. There’s no long video to watch.