How to Prosper (Zero-Interest Rates Be Damned) 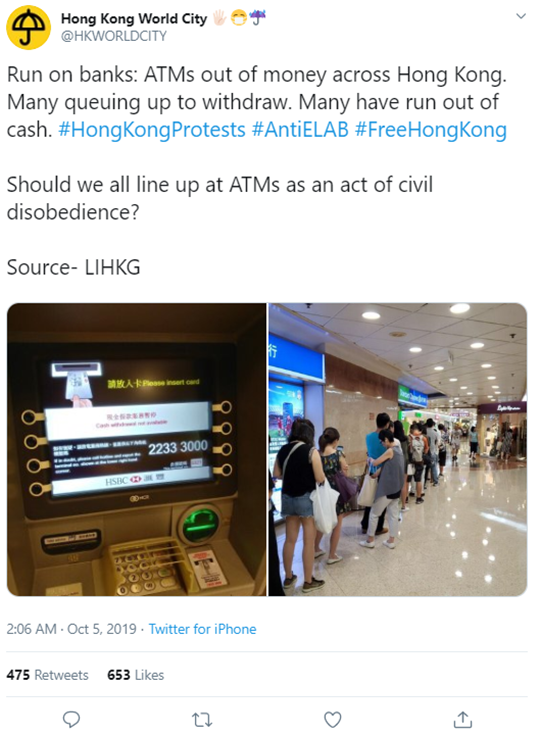 The quest for liquidity (and privacy) comes amidst Beijing’s efforts to keep tabs on protesters by tracking their digital payment histories.

Adding to the spike in bitcoin trading are rumors China might impose a measure to freeze Hong Kong citizens’ assets at will. Something Hong Kong Chief Executive Carrie Lam denies… but city residents aren’t buying.

Over the weekend, Lam already banned demonstrators wearing masks, invoking the Beijing-backed Emergency Regulations Ordinance. Citizens wonder what other “nail” Lam might hammer with the ERO.

Bloomberg reports: “The Dallas-based hedge fund manager, who is betting that Hong Kong’s currency peg will break, said the former British colony’s economy is being drained of liquidity.”

In summary, Mr. Bass believes: “Hong Kong’s foreign exchange reserves will worsen for… October and a significant amount of capital and investment will leave in the next 12–18 months.”

We think it’s important to note Bass started sounding the alarm on Hong Kong’s fragile economy in April this year, still early days for protests that all-out exploded in June.

(Incidentally, Bass was featured in Michael Lewis’ 2010 book The Big Short: Inside the Doomsday Machine… although he didn’t make the cut for the movie version.

Who knows? Bass might have been folded into amalgamated character “Hedge Fund Manager #1.”)

According to our wealth and income specialist Zach Scheidt, Bass “is known for making some of the most noteworthy macroeconomic calls of this century.

“He made bank for his investors by being positioned to capitalize on the bursting of the U.S. housing bubble and the financial meltdown that followed,” Zach says.

“Bass scored another win when he successfully predicted similar financial crises in both Iceland and Greece.”

And this is rich: Bass was even hauled before Congress (heh… not what you think) to help make heads or tails of the 2008 financial meltdown for the benighted folks on the Hill.

What?! This confederacy of dunces didn’t do a good enough job? 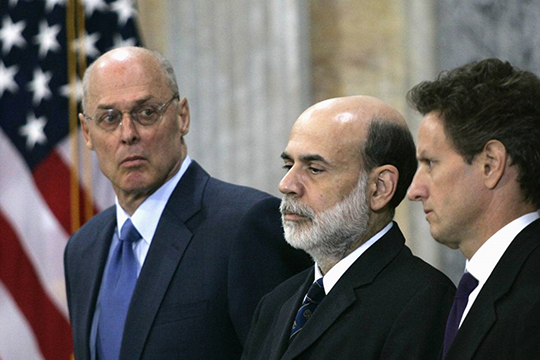 “Bass believes by this time in 2020 American interest rates will have completely collapsed,” says Zach, and “rates aren’t just going to go down — they’re going to drop to zero.”

“If, as Bass predicts, interest rates in the U.S. nosedive over the next 12 months,” Zach continues, “the front traders we follow are going to be key in unlocking major profits.”

“We already know that private equity firms alone are sitting on $2.44 trillion of dry powder,” he says. “With borrowing costs dropping, private equity giants and corporations are going to put trillions of dollars to work through acquisitions.”

And because of low interest rates, Zach expects large corporations to borrow money by issuing bonds as investors cast about for anything with higher-than-zero yields — making it even easier for companies to invest in buyout opportunities.

“That’s where our front traders come in,” says Zach. “If we follow them, they’ll lead us to the companies that are the most likely to be acquired — at big premiums — putting us directly in front of this multitrillion-dollar M&A wave.

“So as we head into the end of the year, I’m expecting low interest rates to spur plenty of buyout announcements from cash-rich corporations and private equity buyers,” Zach says.

“They’ll be setting themselves up for bigger profits in 2020… while we’ll have a chance to collect overnight gains when the deals are announced.”

[You owe it to yourself to watch this 81-second video now because — due to its time-sensitive content — it will be removed from the internet tomorrow at midnight.

In it, Zach shows how to claim a “One-Day Bonus” from massive buyouts… just like Wall Street insiders.

And it all starts with one simple trade… but it expires at midnight tomorrow.]

The repo rescue is now a permanent, ongoing thing.

Powell went out of his way to say that blowing up the Fed balance sheet anew is not intended to shore up the economy but rather to keep the banking system liquid. As if that’s supposed to make us feel better!

He said the “time is now upon us” when “my colleagues and I will soon announce measures to add to the supply of reserves over time.” (emphasis added)

Umm… isn’t that the very definition of Q— 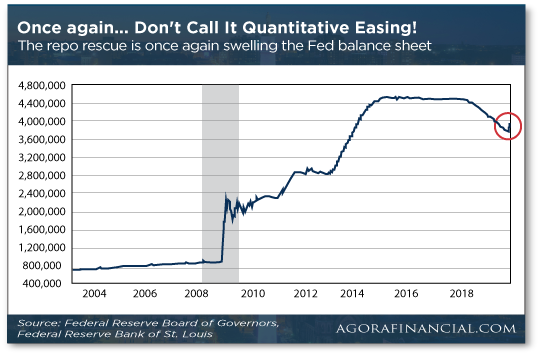 “This is not QE,” Powell said after his speech. “In no sense is this QE.”

Speaking of Powell and QE — there, we said it! — the markets took a tumble after his announcement yesterday… Today? The Dow’s pared some of yesterday’s losses; it’s up 200 points to 26,365.

At last check on the streaming wars: “Netflix (NASDAQ:NFLX) had just snagged Seinfeld as its Hulu contract came to an end,” analyst Greg Guenthner notes.

“Now the original content streaming king is dealing with new threats to its domination from Disney (NYSE:DIS).” The latest sally from the mouse-eared juggernaut? “Disney just nixed all Netflix commercials from airing on any of the multiple TV networks it owns, reports The Wall Street Journal.”

Greg continues: “Netflix has been on the ropes ever since the company announced it brought in just 2.7 million new paying customers last quarter, fewer than half of what were initially forecast. International subscribers were also a weak point. 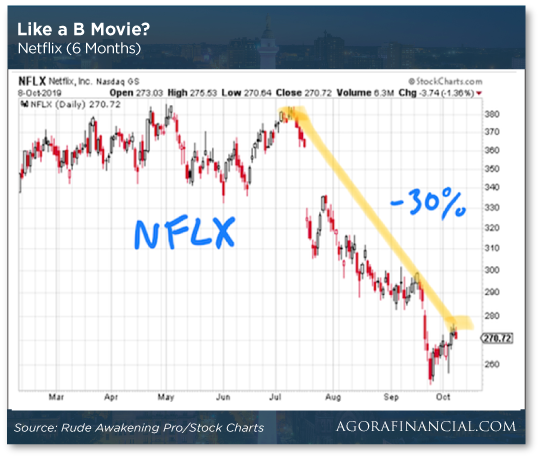 “Despite bouncing off its September lows, the stock remains 30% off its July highs.

“Barring a sustained turnaround,” Greg says, “Netflix isn’t a stock we want to own anytime soon.”

Professor Galloway is taking a “victory lap” of sorts, he tells New York Magazine, in an article Jim Rickards brought to our attention.

Galloway back in 2017 said WeWork “was the most overvalued company in the world” and published a couple of posts at his website No Mercy/No Malice titled “WeWTF” and “WeWTF, Part Deux” in August and September respectively.

“[Neumann] jumped out of the plane before it hit the ground. He pulled the rip cord.

“He has exited… with $740 million, and everyone else gets to ride this out to its logical end, which will likely be a bankruptcy file.”

Everyone else includes WeWork’s 15,000 employees… and Galloway anticipates pink slips for approximately 80% of them in the next 60 days. 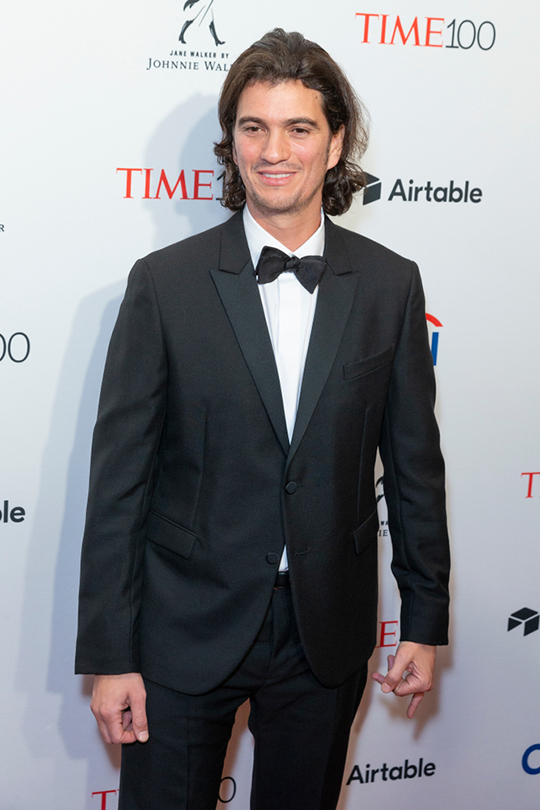 “Could you imagine what [Neumann’s] life would be like right now?” Galloway continues. “If he was still CEO?

“Showing up every day to an office where he had sold $750 million and everybody else was trying to figure out how they were going to pay the rent on the new apartment they had moved into because they thought they had $7 million in We stock?”

As blood pressure raising as the Neumann subplot is, Galloway says: “The bigger story here is SoftBank. WeWork is the opportunistic infection that is going to kill the Vision One Fund,” he says.

Japanese SoftBank has notoriously doled out billions in venture capital through its complex Vision Fund to Silicon Valley unicorns — WeWork and Uber included.

“[The Vision Fund is] beyond repair,” says Galloway. “Between Uber and WeWork, you have $20 billion of the $100 billion.

“One is likely going to be a zero — that’s WeWork — of $11 billion. So it’s hard to imagine [SoftBank’s] even going to get their investors their principal back.” For his part, SoftBank’s billionaire CEO Masayoshi Son says he’s “embarrassed” by the WeWork debacle.

A bright side to the WeWork disaster? “The marketplace stepped in,” says Galloway. “The mandatory disclosure that the SEC requires in the form of S-1. The autopsy here will reflect death by S-1…

“Essentially what happened is that the employees of We who didn’t get a chance to sell, SoftBank and some other institutional investors have lost $47 billion.

“Had this consensual hallucination gone on for 60 more days, retail investors would have experienced that loss.

“So this is a good thing!” Galloway concludes. “This is the markets working.”

In a story gone viral after being dormant several years: A Midwesterner received a letter from the Department of Environmental Quality about a pond on his property.

In a letter addressed to Ryan DeVries, he was cited for being the “contractor who did the following unauthorized activity: Construction and maintenance of two wood debris dams across the outlet stream of Spring Pond.

“A permit must be issued prior to the start of this type of activity. A review of the Department’s files shows that no permits have been issued.” 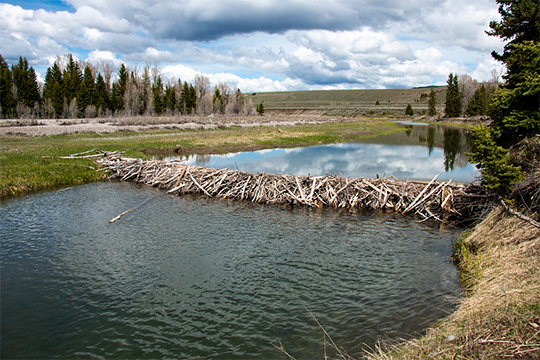 To which, Mr. DeVries wrote: “These are… beavers/contractors you are seeking.

“As to your request, I do not think the beavers are aware that they must first fill out a dam permit prior to the start of this type of dam activity.

He concludes: “In my humble opinion, the Spring Pond Beavers have a right to build their unauthorized dams as long as the sky is blue, the grass is green and water flows downstream.”

With access to a better and more powerful system than ever before.

And the only tool in the entire world that can track giant buyouts before they happen.

The best part? You don’t need a lot of cash to get started…

But you do need to act before TOMORROW at MIDNIGHT.