What began as a one-shot “emergency” measure three weeks ago is becoming a regular occurrence… and will remain so until at least next month.

Late on Friday — when government agencies release embarrassing information to ensure it gets as little notice as possible — the Federal Reserve announced it would continue propping up the “repo” market through Nov. 4.

As we explained when the trouble emerged last month, repurchase agreements. or “repos.” are where Wall Street firms put up U.S. Treasuries as collateral in exchange for overnight loans. They use the cash for their daily trading. Repos are the lubricant that keeps the financial system humming.

The repo market seized up on Sept. 16 and the Fed intervened to stabilize repo interest rates — something it hadn’t done since the Panic of 2008.

With the announcement, the “official” story we were told when the crisis broke out has been rendered a lie.

At first, we were told corporations were draining their cash reserves to meet quarterly tax payments at the same time the market was flooded with Treasuries — a hangover from the debt-ceiling farce earlier this year. It was a one-time thing.

Then we were told the Fed’s efforts would have to continue through the end of September as Wall Street firms needed the extra liquidity to square their books at the end of the quarter. It would be over as of last week.

With this latest announcement, the Fed didn’t even bother coming up with an excuse. Never apologize, never explain, right?

Which leaves you and me with some troubling questions. The establishment financial media aren’t trying to answer them. And congressional oversight? Forget it.

Under the 2010 Dodd-Frank Act, the Fed is supposed to advise Congress about any emergency loans it makes — including who’s doing the borrowing.

“According to multiple sources we queried,” write Pam and Russ Martens at their Wall Street on Parade website, “the New York Fed has not made the names of these banks doing the borrowing available to either the Senate or House [banking] committees. And if there is pushback from the committees, the public is not hearing about it.”

Indeed, the repo rescue is nowhere to be found on the October agenda of the House Financial Services Committee, chaired by Rep. Maxine Waters (D-California). 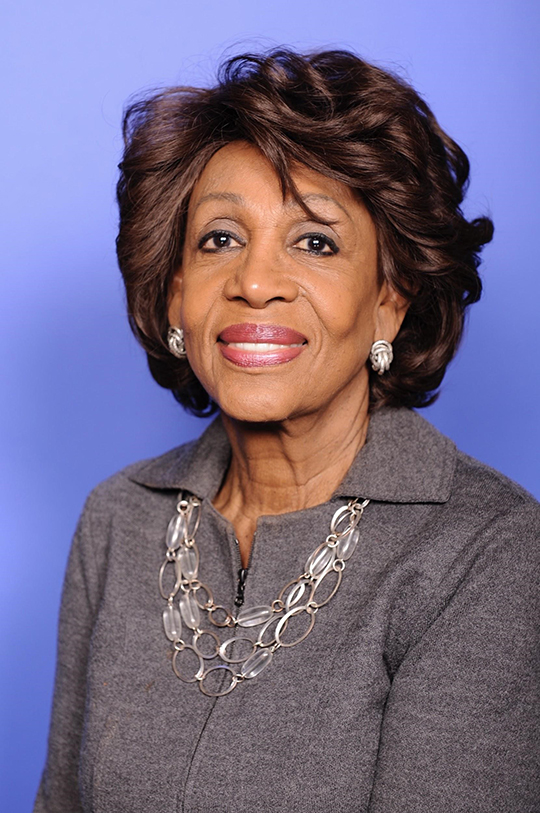 “No, ma’am, you’re supposed to perform oversight, not commit oversight”

“There are only two ways to look at what is happening today. It starts with basic math,” the Martenses continue.

“As of June 30 of this year, the four largest commercial banks held more than $5.45 trillion in deposits. The breakdown is as follows: JPMorgan Chase has $1.6 trillion; Bank of America clocks in at $1.44 trillion; Wells Fargo has $1.35 trillion; and Citibank is home to just over $1 trillion.

“With $5.45 trillion in deposits, why isn’t there enough liquidity to make loans in the billions? Either the big banks are backing away because of something they see on the horizon or something very troubling has happened to their liquidity.”

Curiously, Reuters reported the following last Tuesday: “Publicly filed data show JPMorgan reduced the cash it has on deposit at the Federal Reserve, from which it might have lent, by $158 billion in the year through June, a 57% decline.”

“Why,” the Martenses ask rhetorically, “isn’t Congress curious about why the country’s largest bank needs to get its hands in a six-month period on $158 billion when it’s supposed to already have $1.6 trillion in deposits and a ‘fortress balance sheet,’ according to its chairman and CEO, Jamie Dimon?”

We caution that if the stresses in the repo market are the harbinger of a new financial panic, it does not mean a recession is right around the corner.

“Financial panics and recessions don’t always go together,” says our Jim Rickards. “Panics can happen without recession.” Examples include the stock market crash of 1987, the Mexican peso crisis of 1994 and the Russian default that led to the collapse of a major U.S. hedge fund in 1998.

As Jim said here just last week, recession risk remains low for the time being. But a panic is another question altogether.

We return to a familiar chart if you’ve been following our daily missives — the Fed’s balance sheet. It exploded in the years after the Panic of 2008 from less than $900 billion to over $4.5 trillion because the Fed was busy shoring up the banks with “quantitative easing.”

The Fed began slooowly reversing that process early last year, only to abort this past July.

Before the repo madness broke out last month, the Fed’s balance sheet stood at $3.77 trillion. In only three weeks, the total has shot up by $180 billion. 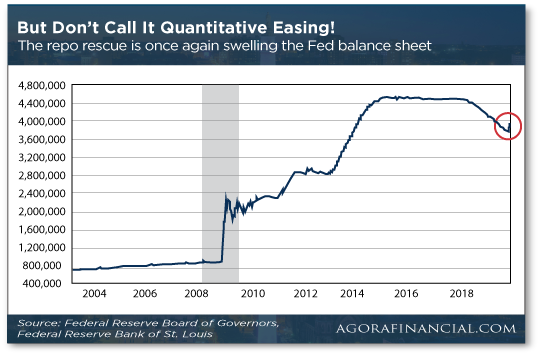 It will easily top the $4 trillion mark again by the time the Fed winds down its rescue operations in four more weeks.

Assuming that’s the end of it. And it’s probably not.

The problem — as Jim Rickards has been telling us for years — is that the Fed can’t fight the next recession with a rerun of the 2008 –2014 playbook, blowing up the balance sheet again. Everyday Americans won’t stand for another massive bank bailout and people overseas will lose all confidence in the U.S. dollar.

Now that would be a combination of a recession and a financial panic — 1929 and 2008 combined and on steroids.

We’re nowhere near there yet, but the repo rescue is making it that much more inevitable…

The new trading week is off to a quiet start, the major U.S. stock indexes slightly in the red. At last check the Dow stood a little below 26,500. Gold is oscillating around the $1,500 level.

Crude prices are likewise quiet — a barrel of West Texas Intermediate at $53.36 — despite an imminent outbreak of large-scale war in the Middle East.

Turkish troops are poised to sweep across the border into Syria at any moment. U.S. troops in northern Syria are getting the hell out of the way. No big oil fields nearby, but God knows who might get dragged into this conflict before it’s all done.

Here’s a thumbnail sketch of how matters reached this state: When the “Arab Spring” protests broke out in 2011, the Obama administration began supporting factions in Syria that opposed President Bashar al-Assad. Some of those factions were hard-core jihadists, but the most reliable bunch of fighters were the YPG — a group made up of ethnic Kurds. The YPG was also useful fighting ISIS. But Turkey was never comfortable with this state of affairs because the YPG is tight with Turkey’s large and restive Kurdish minority.

Fast-forward to this morning: Assad still rules most of Syria after a horrific eight-year civil war. Turkey is ready to invade northern Syria to rout the YPG once and for all. U.S. troops stationed among the YPG are being pulled out.

Basically Washington put itself in a situation where it was forced to choose between the Kurds and Turkey, a long-standing NATO ally. It chose Turkey.

There are Deep State factions that were keen to expel Turkey from NATO — not least because Turkey bought heavy weaponry from Russia this year. But Turkey could easily respond by expelling U.S. troops from the giant Incirlik Air Base, where they’ve been stationed for nearly 60 years. 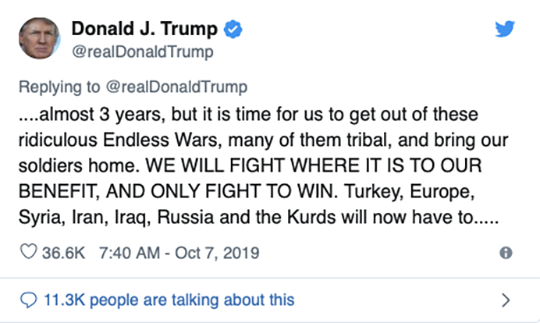 So if it’s time to bring the troops home, why not pull out of Incirlik, Mr. President?

The Kurds are understandably complaining about a “stab in the back.” Which brings to mind a famous line of Henry Kissinger: "It may be dangerous to be America's enemy, but to be America's friend is fatal."

Well, Henry the K ought to know: In the 1970s he arranged to supply millions of dollars in arms to the Kurdish population of Iraq for an uprising against Saddam Hussein — only to abandon them when the uprising became inconvenient to Kissinger’s other Middle East schemes.

Despite recent headlines about big-name companies like WeWork dropping their IPO plans, the U.S. trend is not recent; we were writing about it in 2014. And as we pointed out in 2017, many companies are choosing to stay private for much longer than they used to.

Some of that can be chalked up to Uncle Sam’s onerous paperwork requirements for public companies; a lot of it, though, is easy money from the Federal Reserve that finds its way into the hands of venture-capital and private-equity investors. If you’re a fast-growing company, why go public to raise money when all these deep-pocketed guys are falling all over themselves to invest? 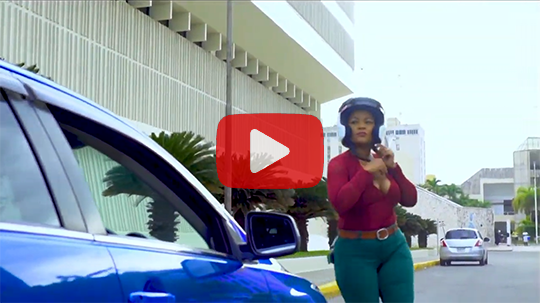 The Bank of Jamaica is using reggae and dancehall music recorded by local artists to make citizens feel good about the central bank’s work. In addition to the video above, Jamaican pop star Tarrus Riley has recorded a song that goes like so…

All the high prices that mean me harm
They can go back where they came from
No inflation monster
Shall prosper!

“Behind Jamaica’s playful strategy is a serious goal,” says The Wall Street Journal: “to build public support for a government policy designed to bring economic stability to a country that has long been a financial basket case.” 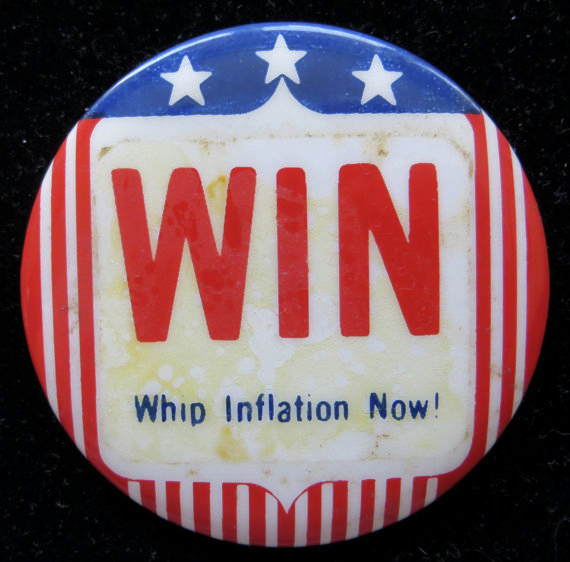 These went great with bell-bottoms…

Up next for the Bank of Jamaica is a single and music video based on Sean Paul’s 2005 hit “Temperature.” The aim — to create a viral craze called the Inflation Dance.

We’ll keep you posted if it catches on. Or maybe not…

After the job numbers Friday, a reader writes: “Is it possible that the new low in the unemployment rate is an artifice of retiring boomers shrinking the labor pool more so than actual job creation?”

The 5: This is a common myth, so common we have to knock it down every now and then.

In reality, the over-55 set is the only age cohort whose “labor force participation rate” — that is, they’re either working or looking for work — has grown since the “Great Recession” of 2007–09.

Here are figures crunched just this year by the Bureau of Labor Statistics; unlike the unemployment rate, these are numbers the wonks can’t monkey with (aside from the future projections)… 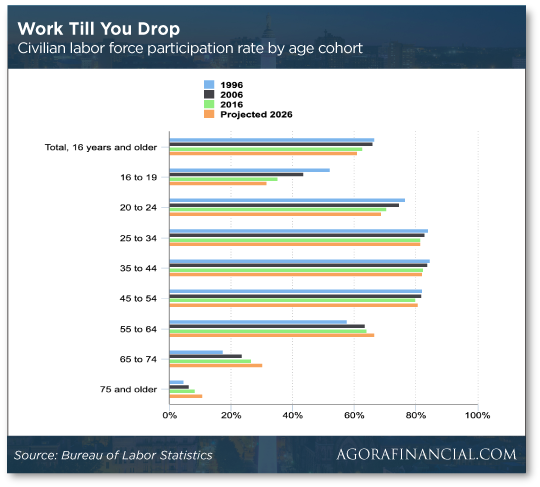 No, the decline in the “U-3” unemployment rate is achieved mostly by 1) excluding part-timers who want a full-time job and 2) excluding people who gave up looking for work longer than four weeks ago.

The latter category exploded after 2008… which is why labor-force participation has shrunk among the under-55s on that chart. Legions of those people departed the workforce in the last decade and they’re never coming back…

P.S. By the way, that’s the reason we continue to report the “real world” jobless rate from ShadowStats — 20.9% might be overstated, but it’s a lot closer to the truth than 3.5%.