The Real Job Numbers (Are You Ready?)

Before we start the clock, a special note from Dave: On July 10, I unveiled a revolutionary trading strategy. We took on a small circle of readers as proof of concept — and then closed off access only five days later.

Since then, this strategy has booked nothing but winning trades.

Today, we’re reopening the doors. If you’re looking to bag big gains before 2019 is over, I urge you to check out this video I’ve recorded. You’ll know within the first minute and 21 seconds whether this strategy is for you. Don’t wait to watch it — we might very well close the doors again after only five days.

The recession has been once again postponed. At least that’s our takeaway from the monthly job figures.

It’s true, the headline number was disappointing. It takes 150,000 new jobs every month just to keep up with population growth. Expectations among economists called for 145,000. And the wonks at the Bureau of Labor Statistics delivered only 136,000.

As we pointed out last year, a recession typically sets in only four months after the unemployment rate hits bottom. That’s the average of the 10 recessions going back to 1950. The longest span was 10 months.

The new low in the unemployment rate reinforces our suspicion — we won’t call it a conviction — that the current economic expansion, such as it is, still has a while to run. (And the rate might go lower still.) Ditto the fact there was zero wage growth last month. Bad news for workers, but it also means there’s no sign of the dreaded “wage-price spiral” that usually precedes a recession.

As we were trawling through The 5’s voluminous archives today, we came upon an episode from May 29 this year making a comprehensive case for no recession on the immediate horizon. Everything we said continues to hold up.

But we hasten to point out the job picture remains truly grim by historical standards.

During September, 82.8% of Americans age 25–54 — “prime working age,” as the saying goes — were either working or looking for work. 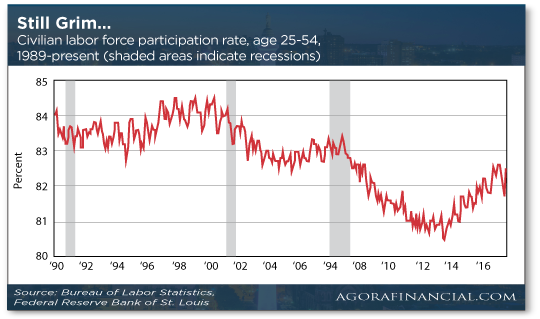 That ugly reality is reflected in the real-world unemployment rate from Shadow Government Statistics.

Over the years, the government has monkeyed with the unemployment rate to make things look better than they are. But ShadowStats runs the numbers using the same methodology the feds used 40 years ago.

The good news this morning is that real-world unemployment is the lowest since the summer of 2009. The bad news is that the rate is still an appalling 20.9%.

Still, it’s the headline number that usually generates a market reaction… and today is a case of “bad news is good news.”

With the job-creation engine sputtering, expectations of easier money from the Federal Reserve have juiced the major U.S. stock indexes about three-quarters of a percent. As we write, the Dow is a few points away from 26,400.

The next Fed meeting comes at the end of this month. Futures trade this morning points to a 79% probability the Fed will cut its benchmark fed funds rate another quarter percentage point… and a 42% probability of another cut in December.

Meanwhile, gold is hanging onto yesterday’s gains at $1,505. Crude is bouncing off its lows for the week, now a penny above $53.

Oy, here we go again with the encryption thing.

During Obama’s second term, the Justice Department waged a jihad against “end-to-end encryption” — technology Apple uses to keep customers’ iPhone data private. FBI Director James Comey leaned hard on Apple to create an electronic “back door” that would allow the feds to bypass Apple’s encryption and snoop on your devices if the feds so chose.

Apple CEO Tim Cook tried to get it through Comey’s thick head that hackers can just as easily exploit a back door as the feds — there’s no form of encryption that only “good guys” can get around.

It appears Attorney General William Barr is just as clueless as Comey.

Barr has joined his British and Australian counterparts in sending a letter to Facebook CEO Mark Zuckerberg — asking him to delay FB’s plans to employ similar encryption across all its messaging services. (It’s already in use with WhatsApp.)

Per this morning’s Wall Street Journal, “The push reflects a strategic pivot for the Justice Department, which historically sought to highlight how encryption stymied national security and terrorism investigations.

“Under Mr. Barr, the Justice Department has sought instead to emphasize the trouble law enforcement faces in pursuing child-exploitation cases, according to people familiar with the matter.”

[We can’t help pointing out: Once again, just as with the vaping ban, Republicans are justifying Big Government measures “for the children.” What the hell?]

Much as we lament this development for your liberty and privacy, we’ll concede Barr shifting the target to FB is smart politics. Apple is a powerful brand that still commands loyalty from a large customer base. In contrast, Facebook’s reputation still hasn’t recovered from the many scandals of 2018.

For the record: The national debt leaped by $1.2 trillion during fiscal year 2019.

Uncle Sam closed the books for the fiscal year on Monday. The national debt grew during the previous 12 months from $21.5 trillion to $22.7 trillion.

Budget hawks are wont to remind us that these gargantuan numbers are not the result of efforts to fight a recession, as happened from 2009–2012. The economy now might not be “robust” (see above), but it’s not struggling to get off the floor, either. No, this is just plain ol’ reckless spending by the White House and Congress. (Bipartisanship ain’t all it’s cracked up to be.)

Just imagine what happens whenever the next recession does roll around and tax receipts crater while spending on unemployment benefits and Medicaid explodes. Sheesh…

[By the way: You might see a headline in the next few days about the size of the federal budget during fiscal 2019. It will probably be a lower figure than $1.2 trillion. Ignore it.

The deficit numbers are all accounting trickery; the rise in the national debt tells the real story. The “balanced budgets” during the time Bill Clinton was president and Newt Gingrich was House speaker were all bogus; the national debt kept rising year after year.]

As we’ve reported for a while now, Russia’s central bank has dumped most of its U.S. Treasury holdings while loading up on gold. Even more important, Moscow is working with China and Iran on a global payments network that will end-run the dollar-dominated SWIFT system.

“The dollar enjoyed great trust around the world,” Putin said at a conference this week. “It was almost the only universal currency in the world. For some reason, the United States began to use dollar settlements as a political tool to impose restrictions on the use of the dollar.

“They [the U.S.] are biting the hand that feeds them,” he added. Sanctions “undermine the trust in the dollar; isn't it clear that they are destroying it with their own hands?”

For Russia, “building an alternative from the ground up using local currencies such as the ruble or yuan or new cryptocurrencies is the best way to work around U.S. sanctions,” says our Jim Rickards.

“Russia is the leader in developing these new technologies and systems. It may not be long before the participants in the Russian system trade oil, weapons, infrastructure, agricultural produce and electronics among themselves without using dollars at all.

“In time, the dollar may be just another local currency like Mexican pesos or Turkish lira. That time may not be faraway.”

In the very long term, here’s a development that doesn’t bode well for homebuilders: American households are growing in size for the first time since pre-Civil War days.

The Pew Research Center has been crunching new numbers from the Census Bureau. One of the startling takeaways is that the size of a typical U.S. household is growing for the first time since 1850.

Think about the people you know, and maybe the reasons will come into focus: Older folks are increasingly moving in with their kids, while there’s still a huge Great Recession hangover of young adults who moved back with their parents.

“Pitbull is a knucklehead,” a reader writes after we took note yesterday of a rather sexist performance delivered by the pop/rap star at an advertising-industry conference — where the leaders spent most of the week touting their supposed empowerment of women).

“I took my teenage son to see him a couple of years ago, and in between sets he dropped fusillades of f-bombs in front of preteens and then self-aggrandized about being a positive influence.

“It’s hard to say which plumbs a lower depth… his ‘music’ (which largely consists of bastardizing someone else’s successful songs) or his self-awareness.”

“LMAO, so when exactly do we declare cash the winner of the War on Cash?”

P.S. One more thing about my note up top today: While the trading strategy I unveiled in July has booked nothing but winning trades to date, we weren’t satisfied with just “great.”

So we tweaked the system to make it even better. And now we’re ready to open up this strategy to new subscribers once again. I recorded a brand-new video to lay out how the strategy works.

You can watch it right here… with the proviso that just as in July, there are no guarantees how long we’ll keep the doors open.