“It is impossible for us to cancel relations with Iran with regards to oil and natural gas,” Turkish President Recep Tayyip Erdoğan told reporters Friday after attending the U.N. General Assembly (UNGA) in New York.

He pledged Turkey would continue to buy Iranian oil despite U.S. sanctions: “On this issue especially… we will continue our relations with Iran.” Erdoğan further doubled-down, saying Ankara hoped to increase trade — not just oil and natural gas — with Iran.

And we strongly doubt Erdoğan missed a word when a Saudi official took to the floor of the General Assembly Thursday.

Saudi Foreign Minister Ibrahim al-Assaf urged the U.N. to apply the “utmost pressure with every tool available” to combat what he deems Iranian aggression.

This after the orchestrated missile and drone attack on two Aramco oil facilities in Saudi Arabia Sept. 14 — an attack that disabled about 50% of Saudi oil output and one for which Yemen’s Houthi rebels have claimed responsibility. 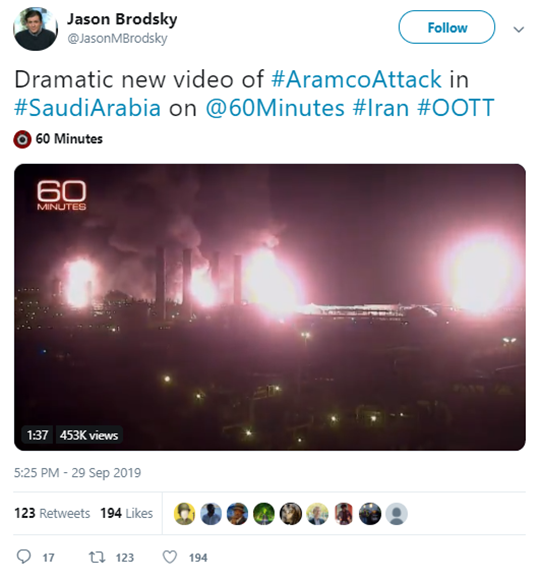 Did you miss the #Iran up top?

Iran denies any wrongdoing, asserting Yemen has probable cause to strike the kingdom that’s all but turned most of the Middle East against it, Yemen being one of the region’s poorest countries.

So Iran’s making its own recommendation: “The security of Saudi Arabia will be guaranteed with the termination of aggression in Yemen, rather than by inviting foreigners,” said Iranian President Hassan Rouhani in his own address to the UNGA.

As for that “inviting foreigners” jab, Rouhani was sounding off on the Pentagon’s plans “to send four radar systems, a battery of Patriot missiles and about 200 support personnel to bolster Saudi Arabia’s defenses,” according to Al-Jazeera.

Not to mention the U.S. military has its “prepare to deploy orders” should the situation in Saudi Arabia escalate.

Speaking of, President Rouhani cautioned world leaders the Gulf region is “on the edge of collapse, as a single blunder can fuel a big fire.”

We’ll keep you posted on what’s starting to feel like déjà vu… all over again.

For his part, wealth and income specialist Zach Scheidt noticed the immediate pop in the price of oil after the Aramco attack… a pop that’s since settled.

“But behind the scenes,” he continues, “traders are gearing up for a massive turning point for oil and energy stocks.

“I want to share a secret with you that will help you identify key opportunities like this and make out like a bandit when the next wave of buying hits the oil market.

“Professional traders call it an A-B-C pattern,” says Zach. “And if you know how this setup works, you can make a lot of money in a very short time.”

Here’s how it works: First, the “A” reaction is to headline news — precisely what we saw when oil and energy prices soared following the Aramco attacks in Saudi Arabia.

“Investors… expected that this attack would reduce the supply of oil to the global market, driving prices higher.

“Part ‘B’ happens when traders start to lock in profits from the initial move,” Zach says. Shortly after, “as their sell orders hit the market, prices naturally pull back.”

Exasperating, sure, for investors who’re behind the curve and bought when the market’s already had time to absorb the news.

“Finally, part ‘C’ happens when short-term traders and frustrated investors stop selling,” Zach says. “Stocks are then free to trade higher based on the actual profits that companies are expected to make.

“And if the original news event is very good for the stocks in question, this part of the pattern can last for quite some time and lead to unbelievable profits.”

Zach says: “The key for investors is… to make sure to be invested during the ‘part C’ portion, where profits are the most reliable and most lucrative.”

And now’s the time, Zach believes, “to tap into this… trading pattern for energy stocks tied to the oil market.

“U.S. energy companies” — for example — “can now sell the oil they produce at higher prices, leading to bigger profits.

“These profits should drive more investment in new wells,” says Zach, “leading to gains for companies that supply equipment, drilling expertise and other services to the oil market.”

The Energy Select Sector SPDR (XLE) might be right in the “sweet spot” that Zach’s underscored — plus, the ETF comes with a 3.97% dividend yield to boot.

Because they’ll retire rich from a single check — a bonus that’ll make them rich in one day.

Now for the first time ever…

Zach’s publisher shows YOU how to claim your own “One-Day Bonus” from massive buyouts… without working a SINGLE day on Wall Street.

All it takes is one simple trade… but it expires today at MIDNIGHT.]

A new spin on something from yesterday’s mailbag: “America may be feeling a pinch, but think about what China is feeling.”

To wit, we give you the company that’s been called the “Tesla of China” — electric car maker Nio Inc. (NYSE:NIO). And, much like Tesla, NIO wants to get far away from traditional dealerships, favoring instead the hipster pop-up model.

“Now some analysts suspect NIO is running out of cash,” says Greg. “One industry analyst cut NIO’s price target to less than $1, Yahoo Finance reports, noting that there’s probably not enough demand to justify the planned 200 pop-up stores in more than 100 Chinese cities.”

And as the hits keep coming for NIO, shares are down 50% since Sept. 1… 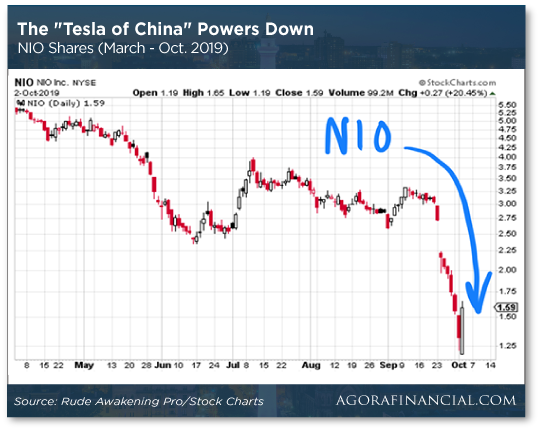 “Even factoring in yesterday’s double-digit snapback,” Greg says, “since the stock’s highest point in March of this year, NIO shares have fallen more than 80%.”

“While NIO stumbled into oblivion,” Greg says, “Trump is looking to crack down on Chinese companies listed on U.S. exchanges.”

We reported last week the rumor Trump was floating the idea of delisting Chinese companies from U.S. exchanges — mostly as a “lever” to pressure China ahead of trade talks in mid-October.

“But Trump’s not the only one looking to clamp down on Chinese ADRs,” says Greg. “Even the Nasdaq is looking to tighten up its requirements for Chinese stocks.

“The Nasdaq is concerned that most of the shares from these companies are going to Chinese insiders, leaving other potential investors in the dust.”

Here’s how that works: “Chinese investors are using the IPOs from small companies as a backdoor method on cashing out in a way not allowed in communist China,” Greg says.

“To combat this, the Nasdaq is shaking up the criteria a bit before a company can IPO. First, the company has to have at least some tenuous link to the United States. And at least half of the shareholders must hold $2,500 or more in shares,” Greg notes.

The price of oil, however, continues to slip — down 67 cents to about $52 for a barrel of West Texas Intermediate.

You might remember: Tuesday the ISM manufacturing index turned in a desultory reading of 47.8, a sub-50 number that suggests the factory sector is contracting. The poorest reading, in fact, since June 2009. Indeed… Great Recession territory.

So as manufacturing has softened this year, the concern’s been if that weakness will spill over into the services sector. Today’s ISM nonmanufacturing index for the month of September says we’re definitely getting closer.

The number came in way below expectations at 52.6 with economists’ predicting 55.3. The index has turned in over-50 readings consistently since early 2009. That might be about to change for the month of October?

“For the sixth year in a row,” the Tax Foundation says, “Estonia has the best tax code in the OECD.”

The Tax Foundation’s International Tax Competitiveness Index (ITCI) measures the degree to which the 36 countries that comprise the Organization for Economic Cooperation and Development “promote competitiveness through low tax burdens on business investment and neutrality through a well-structured tax code.”

According to the OECD’s website: “Most of the [member] countries… are developed” and “have a high-income economy.

“These countries use the OECD as their platform to develop best practices, coordinate their numerous policies and find answers to common issues by engaging with fellow countries with similar issues at hand.”

The headquarters for the OECD are located in Paris, France. We only throw in this last factoid because it’s actually dripping in irony… France placed dead last in the rankings for tax-friendliness in 2019. As it did in 2018. And 2017.

We know we’re keeping you in suspense… 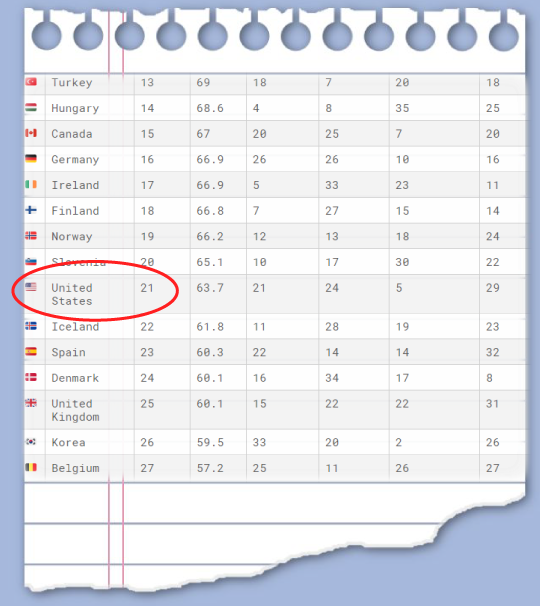 The U.S. ranked 21st out of 36 countries — sandwiched between Slovenia and Iceland for overall tax competitiveness, the same as last year but up from the 28th slot in 2017.

(Something about big-time corporate tax relief?)

In proof the misogyny of the Mad Men era ain’t dead: Advertising Week New York — an industry event that caters to the ad set — brought down the house Friday with a performance by “artist” Pitbull.

That’s the name of pop/rap star famous for such songs as “DJ Got Us Fallin’ in Love” and “Hotel Room Service.” (Not ringing a bell with us either.)

Well, perhaps you’ve seen Pitbull on TV? Seems he performs on one or another cheeseball New Year’s Eve celebrations every year. It’s practically obligatory now… and you know your career’s in the crapper when you’re relegated to a New Year’s Rockin’ Eve.

At any rate, he’s doing the corporate circuit now… 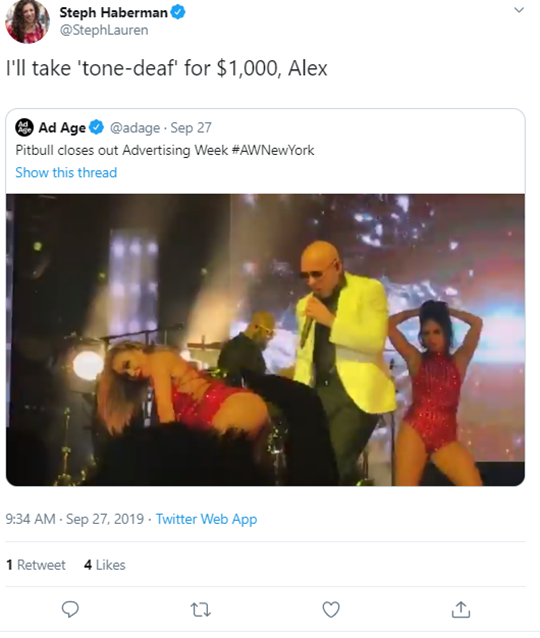 And with a cadre of female dancers, he’s really twerking it. (Go ask your parents… heh.)

What’s exceptionally out of place when it comes to the choice of *entertainment* is the fact the weeklong event featured a series of talks on “Future Is Female” and — we kid you not — “It’s a Great Time to Be a Woman.”

Enough to make your stomach sink…

Speaking of Mad Men, where’s Peggy Olson when we need her?

P.S. Don’t miss this invitation to a remarkable club…

With access to a better and more powerful system than ever before.

And the only tool in the entire world that can track giant buyouts before they happen.

The best part? You don’t need a lot of cash to get started…

But you do need to act before MIDNIGHT.