The Recession Has Been Postponed

All of a sudden, we got sucked into a time warp and it’s early August again. 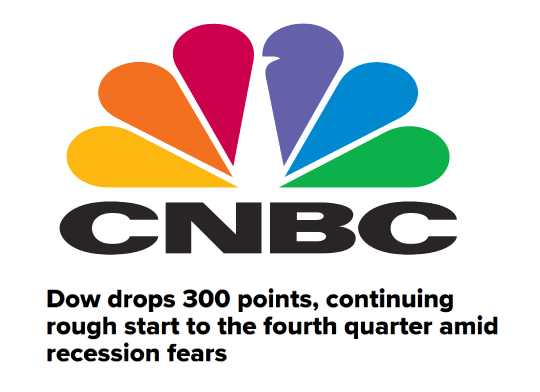 When we left you yesterday, markets were having a muted reaction to the worst-in-10-years manufacturing numbers. But as the day wore on, traders decided things are more dire than they first thought.

The Dow industrials, which began the day over 26,900, shed nearly 390 points. In early trade today, the Big Board dropped another 150.

If you were with us yesterday, you know our own Jim Rickards — often dismissed as a “doom and gloomer” by critics — believes Federal Reserve policy will prop up the economy just enough to ensure a second Trump term. (To be precise, his models currently assign a 67% probability of that outcome.)

Today we turn to another of our experts, who seeks to throw cold water on the negative mainstream narrative.

“The financial news outlets will put a camera in front of anyone who’s predicting doom,” says our Chicago floor-trading veteran Alan Knuckman.

“And they’ll spin any data point as ‘proof’ that they’re right.”

And it’s all nonsense, Alan declares: “Not only is the economy not in danger of slowing down… but U.S. stocks are actually poised to blast off.”

Big Media went bananas a few days ago with a steep drop in consumer confidence numbers. In contrast, we usually ignore those numbers in this e-letter; they’re seldom more than a reflection of the headlines consumers see about how the stock market is doing.

But let’s take the numbers at face value, anyway. “Compared with historical standards, consumer confidence is still relatively high,” says Alan. “At the end of the day, U.S. consumers still have money and are still buying things.

“Indeed, consumers are spending so much money that consumption grew at an annualized rate of 4.7% in the second quarter of this year — the best reading since the financial crisis.”

Meanwhile, even as the growth in corporate profits is slowing down… corporate America is still by and large turning a profit.

“Just look at some of the worst downward revisions for the quarter,” Alan says. “Micron Technology’s estimated Q3 earnings were lowered 85.6% year over year. But it’s still expected to make $0.51 a share.”

And, by way of affirming Jim Rickards here yesterday, Alan says Fed policy will keep the economy humming well into next year.

As you know, the Fed has cut interest rates twice in the last three months. “To the financial media,” Alan tells us, “this was the first sign of an economic apocalypse. The Fed wouldn’t be lowering rates if the economy were healthy, right?

“I understand the confusion. The Fed isn’t known for being proactive. It usually reacts to market conditions instead of preparing for them.”

But in this case, “it’s manipulating interest rates to prevent a recession, not reverse one” — just as the Fed did in late 1998, as we explained yesterday.”

And with falling interest rates putting a hurt on fixed-income investments all over again, “stocks are the only logical choice,” Alan says — “especially since American businesses are still making money.

“The latest rate cut all but guarantees that trillions of dollars will flood into the market. It will be the catalyst that jumpstarts the market and sends it soaring once again.”

[Ed. note: Sure, you could buy an S&P 500 ETF like SPY to ride the trend higher… but if you really want to juice the gains yet to come, you don’t want to miss out on Alan’s weekly trade strategies.

It could be the most powerful “upgrade” to your account with us that you make this year, or next — as our customer care director explains when you follow this link.]

As the day wears on, trade war jitters are adding to the recession fright.

The World Trade Organization has ruled on a dispute between the United States and the European Union — in Washington’s favor. The WTO says EU subsidies to Airbus are unfair to Boeing; that frees Washington to lay tariffs on $7.5 billion of EU exports.

With that, the Dow’s losses for the day have accelerated to 450 points, to 26,113 at last check. The S&P 500 has broken decisively below the 2,940 level — an event chart-watchers say signals more pain ahead for a couple of weeks before the next leg up.

Gold is rallying back toward the $1,500 level this morning — but it might be a false dawn.

“The precious metals trade started to fall apart late last month,” says our chart hound Greg Guenthner, “as gold retreated toward $1,500 after failing to top $1,550 during its most recent rally.

“Gold falling short of its early September highs was the first clue that its three-month rally was seriously running out of steam. And Monday’s drop of more than 2% was all the confirmation we needed that the bulls were overextended.” 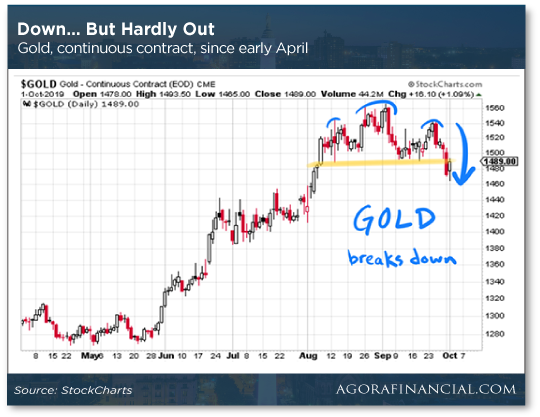 Short term, Greg sees a tumble to the $1,425 level. But he counsels that does not signal a return to a bear market. (If you’re one of our longtimers, you know Greg nailed gold’s bear market in 2013.)

“Hard resets and shakeouts,” he says, “are typical characteristics of powerful comeback moves like the one we’ve witnessed so far this year.”

“Options traders are people too,” protests options trader extraordinaire Jon Najarian — one of the newest additions to our team.

In the years-long trend of retail brokerages slashing fees and commissions, Charles Schwab broke new ground yesterday — announcing 0% commissions on stock trades. At least one competitor, TD Ameritrade, said it would follow suit. Share prices of all the big brokerage names fell hard, Schwab by 10% and TD Ameritrade by 26%.

Back to Schwab’s announcement: The zero-commission plan applies to stock trades only. “There’s still going to be a 65 cent charge per contract on options… BOO!” says Jon.

“In the grand scheme of things, how much is this really going to cost them? Is this really where they make their money?”

From the Department of Hmmm… The website alleging accounting fraud at General Electric has vanished.

Here’s what you find when you go to GEfraud.com —

The site was launched in August by Harry Markopolos — the forensic accountant who was first to spot the epic Bernie Madoff fraud.

As we recounted at the time, Markopolos prepared a 175-page report on behalf of a hedge fund — he didn’t say which one — declaring GE “a bigger fraud than Enron.”

Barron’s was first to notice the website going dark. For the moment, it appears Markopolos himself has done likewise. (He once had a Twitter account, but he hasn’t updated it in years.)

If you’re wondering, GE shares were trading just over $9 the day before Markopolos dropped his report. Within a few days, they were under $8. They recovered to previous levels and then some last month. Now they’re about $8.50.

On the topic of tariffs, which came up briefly yesterday, a reader sends us a one-line email:

“America may be feeling a pinch, but think about what China is feeling.”

Last year the political network funded by the Koch brothers undertook a campaign of TV and internet ads warning that tariffs would cause financial hardship for everyday Americans.

Last month, the campaign was abandoned. As a Koch official told CNBC anonymously, “The argument that, you know, the tariffs are adding a couple thousand dollars to the pickup truck that you’re buying is not persuasive.”

According to a recent poll, 63% of registered voters believe tariffs will hurt America more than China… but 67% say it’s more important to confront China over its trade practices.

A year ago, we observed that if the president wants to wage a trade war, he’ll have to ask for wartime sacrifice from Americans. It seems they’re willing to pay it, as long as the sacrifices are in the form of higher prices for consumer goods.

But what if they come in the form of lost jobs? From time to time we cite Bush 43’s steel tariffs of 2002 — a cynical gambit to hold onto Republican congressional seats in Ohio and West Virginia that year. The tariffs indeed saved about 3,500 steel jobs — at the cost of at least 12,000 jobs in other industries that relied on cheap, imported steel.

How’s the pinch gonna feel then?

“Impeachment will not affect the market, says me,” a reader writes, more or less agreeing with us on our major topic yesterday.

“How do I know? Well, as we are all aware, the stock market is totally efficient, capturing all available information and instantly pricing correctly and to the penny. So if there were to be a negative impact, it would have occurred when the Dems took the House. At that point they had the votes for impeachment and the action was a foregone conclusion.

“The market will simply yawn as the Dems continue to torture Trump, as they would a wounded animal, and they will vote to impeach next September, and not before. The Senate will vote the very next day to acquit.”

The 5: We think you’re engaged in sarcasm with the efficient-markets hypothesis stuff there. Brings to mind the old joke about two economists walking down the street. One says, “Hey, look, there’s a $20 bill on the sidewalk.” The other says, “That’s impossible. If it were a real $20 bill, someone would have already picked it up.” (Jim Rickards performs a thorough demolition of EMH in his latest book, Aftermath.)

But you’re probably right on your main points. There’s no way the “inquiry” will be limited to minutia over a phone call with the Ukrainian president. It’ll become a kitchen-sink thing aimed at dragging out the chaos indefinitely.

“Your assessment is right on point: The ruling class does not give the proverbial rat’s ass about the working class,” chimes in another reader.

“This impeachment nonsense has reached contemptible lows. It’s time to move on, but the crazy Dems won’t. Some may pay a price at the ballot box, but too many Americans have no idea no idea what is going on. Keep it going.”

The 5: Here’s the funny thing. Nearly 18 months ago we mentioned something said by Sen. Amy Klobuchar (D-Minnesota), who was running for another term.

When she was talking to voters, “They’re not asking me about Russian bots, OK? They’re asking me about, like, soybean exports. This is a true story, I spent days in the rural part of our state.”

This year, Klobuchar is running for president. And she jumped on the impeachment train in June. Not surprising, but still…

P.S. Have you seen Jon Najarian’s exposé on the No. 1 reason people lose money with options trades?

Hint: It’s not the 65 cent charge per contract he mentioned.

The truth will shock you. Probably make you a little mad, too. Check it out right here, and soon — the link will stay live only through midnight tonight.

“Imagining some idealized version of a sober, rational impeachment is just fantasy.”