“My father said he wanted me to learn how hard you have to work when you’re in business for yourself,” recalls Kevin Harrington.

Kevin — the newest addition to the Agora Financial team — was one of the original sharks on Shark Tank, sussing out the ideas of aspiring entrepreneurs.

Entrepreneurship runs in the family, he tells us. “When I was 11 years old, my father finally made his dream come true and bought his own bar.

“That summer, at just 11 years old, I worked full time at the bar, mopping floors and washing glasses.”

This was in the late 1960s. No snowflake existence or participation trophies for young Mr. Harrington, the fourth child among six growing up in Cincinnati.

Nor did it get any easier.

“I started a driveway sealing business. I had to do driveways for free to prove to folks I did good work. And I grew that business through a lot of hard work and long hours. I sold that business to help pay my way through college.

“Then I started an HVAC business while in school and dropped out after my junior year because the business was generating $1 million a year. I had 25 employees at the time.

The big breakthrough didn’t come until he was nearly 30. This was the mid-1980s, and he signed up for cable TV.

“I got the 30-channel package,” he told the Digital Trends website earlier this year. “I had CNN and 24 hours of news, and ESPN, 24 hours of sports, but I got to channel 30 and it was the Discovery Channel, and there was nothing programmed there. It was blank.

“So I called the cable company and I said, ‘I’m not getting Discovery Channel.’ They said, ‘Oh, you tuned in when it’s off air. It’s only an 18-hour-a-day network. We only have enough programming for 18 hours a day.’ So I said, ‘What are you doing with the other six hours?’ They said, ‘Nothing.’”

At that moment, the proverbial light bulb went on.

What if the direct-marketing approach that already worked marvelously in a two-minute commercial format — remember Slim Whitman? The bamboo steamer? — could be stretched into lively half-hour chunks and fill that dead time in the middle of the night?

And so Kevin gave birth to the infomercial. “I helped launch products with George Foreman and fitness guru Tony Little.

“When those ideas landed on my desk, they were little more than concepts. No product. No revenue. I made them into huge, profit-spewing realities.”

The late Billy Mays enthusing about his cleaning products? Kevin midwifed that whole campaign too.

In time, Kevin’s firm began trading on the New York Stock Exchange, “doing about $500 million a year in sales.”

Little wonder Kevin became a startup guru… and reality-show producer Mark Burnett recruited him for the original lineup on Shark Tank in 2009.

But despite plunking down $1.2 million for successful deals, Kevin opted to walk away after just two seasons. The format might be great TV, but it wasn’t always good business.

Getting away from the bright lights got him back to what’s real. When he vets a new opportunity, “we want to make sure that if we’re getting involved in something, it’s going to be here the next year and years to come.”

Now in his early 60s, Kevin is embarking on his biggest project yet — helping make lucrative startup opportunities available to everyday Americans like you long before they go public.

“I’ve been waiting for a way to show YOU how to do what I do — make the biggest possible gains by being in on the best ideas long before the crowd… while the idea is still fresh and new.”

Tomorrow at 1:00 p.m. EDT, Kevin will show you exactly how you can become the next startup millionaire, just like him.

“All you need is as little as $50 and the passion to get in on tiny startups that could be the next Facebook or Uber.”

Tomorrow, Kevin will tell you about one private deal that could turn only $50 into thousands… and how you can get in on it before he invests thousands of his own dollars into this very deal.

“You’ve never seen anything like this before,” Kevin promises. Keep an eye on your inbox; all will be revealed tomorrow at 1:00 p.m. EDT.

The major U.S. stock indexes are in the green as a new week begins.

It being the end of the month, when big banks and hedge funds are squaring their books, traders are alert for any signs of stress in the “repo” market for overnight loans such as we discussed a couple of weeks ago. But so far, all appears calm.

Aside from that, trader chatter surrounds the bankruptcy filing of the “fast fashion” retailer Forever 21. The company wasn’t publicly traded, but it’s a reminder the retail apocalypse doesn’t discriminate between private and public companies. 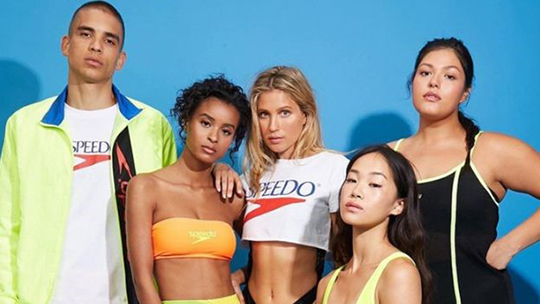 Forever 21’s customers were as bored by their goods as their models were wearing them. [Forever 21 photo].

Meanwhile, in a development that should surprise no one, WeWork is withdrawing its IPO after investors suddenly woke up and realized the billions of dollars they thought they were pouring into a gee-whiz tech innovator were actually going into just another company subleasing office space. Yawn…

The U.S.-listed shares of major Chinese companies are on the rebound this morning — with the White House throwing cold water on a rumor it might or might not have started itself.

As noted here Friday, those names got slammed when Bloomberg dropped a story midday with this lead: "Trump administration officials are discussing ways to limit U.S. investors' portfolio flows into China in a move that would have repercussions for billions of dollars in investment pegged to major indexes, according to people familiar with the internal deliberations.”

Among the measures supposedly under consideration was delisting Chinese companies from U.S. stock exchanges.

By Saturday afternoon, Bloomberg reported the administration was not considering such measures “at this time.” Before the open this morning, White House trade adviser Peter Navarro was on CNBC denouncing the original Bloomberg story as “fake news.”

Really, how would that even work if you owned shares of those companies?

Would you have to sell your shares (but only to foreign buyers) and document the transaction to the IRS? Or would Washington just zero out that portion of your brokerage account? (That would make for some really interesting Fifth Amendment takings-clause litigation.)

Whatever the mechanism, it’s a harebrained idea — which is not to say it was never under consideration at the White House. Heh…

Under previous presidents, anonymous officials would float a story like this as a “trial balloon” to see what the reaction would be, and nobody gave it much thought. But here in Trump time, every trial balloon is cause for a full-on freakout.

Then again, people “in the know” who were short those Chinese names on Friday made a bundle. And if they went long toward the end of Friday, knowing the administration would later walk back the story, they made another bundle. Just sayin’…

At $55.12, oil prices have sunk to where they were before the attack on Saudi Arabia’s oil industry two weeks ago.

Saudi Arabia’s hotheaded and thuggish power behind the throne — Crown Prince Mohammed bin Salman — was the subject of a softball profile on 60 Minutes, a journalistic travesty conducted by none other than Norah “Noron” O’Donnell.

“If the world does not take a strong and firm action to deter Iran, we will see further escalations that will threaten world interests,” he said. “Oil supplies will be disrupted and oil prices will jump to unimaginably high numbers that we haven't seen in our lifetimes.”

Meh. “MBS,” as the clown prince is known, can do basic math.

Writes Conn Hallinan of the think tank Foreign Policy in Focus, “In spite of a $68 billion a year defense budget — the third-highest spending of any country in the world — with a world-class air force and supposed state-of-the-art antiaircraft system, a handful of bargain-basement drones and cruise missiles slipped through the Saudi radar and devastated Riyadh’s oil economy.

Adds the veteran Middle East correspondent Patrick Cockburn from the U.K. Independent: “If the U.S. and Saudi Arabia are particularly hesitant to retaliate against Iran it is because they know now, contrary to what they might have believed a year ago, that a counterattack will not be a cost-free exercise.

“What happened before can happen again: Not for nothing has Iran been called a ‘drone superpower.’ Oil production facilities and the desalination plants providing much of the fresh water in Saudi Arabia are conveniently concentrated targets for drones and small missiles.

“In other words, the military playing field will be a lot more level in future in a conflict between a country with a sophisticated air force and air defense system and one without.”

Just one more way American hegemony is on the wane — in addition to the “de-dollarization” efforts of China and Russia, with Iran joining up in desperation.

Stupid social media tricks: A Japanese airport was banned from Twitter for being underage.

Two weeks ago, the person who handles the airport’s Twitter account thought it would be cute to fill in the “Birth Date” part of the account’s profile as Feb. 17, 2005 — the date the airport opened.

As the SoraNews24 website explains, “Once Chubu Centrair’s account had Feb. 17, 2005, entered as its birth date, it was automatically locked as a violation of the regulation, since to Twitter’s internal workings it looked like the account had been originally made by a 4-year-old, who’d then [flouted] the rules throughout puberty.

“After what must have been an interesting chat with a customer service rep at Twitter, the major transportation hub managed to get its account reactivated by instead inputting the birth date of the person managing the account.”

P.S. Let’s get real: Can you turn just $50 potentially into thousands WITHOUT a single stock, option, bond or any other investment you’ve ever been a part of?

Kevin feels so strongly about ONE private deal, he’s putting thousands of dollars of his own money on the line. And he wants YOU to get in on this deal BEFORE he does.

If you do, you’ll lock in a guaranteed gain. Even better, you can do this for $50, right from home, in two minutes, with no hassles.

Tomorrow at 1:00 p.m. Eastern, Kevin’s going to show you exactly what to do. Click here now for a special message from Kevin.