Pot’s Hype Cycle (You Are Here)

“It’s no secret the entire marijuana sector is struggling,” says our pot stock authority Ray Blanco, “and more pain could be ahead.” 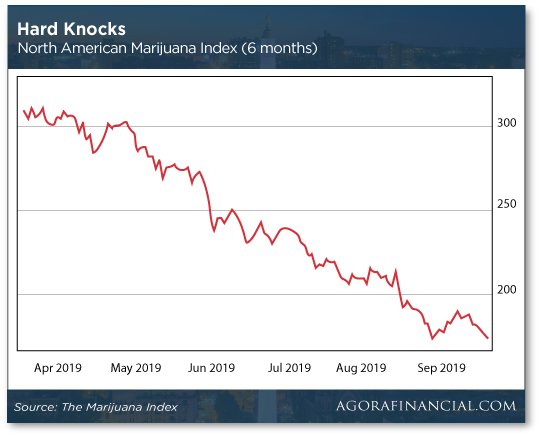 “Now more than ever before,” Ray says, “you need an expert to help you weed through the duds to find the next big gainer.”

Ray’s not speaking out of turn when he claims expert status: “I jumped on the soon-to-be booming legal marijuana industry all the way back in 2016, making me one of the first to ever do so.”

For further proof, he shows returns on just some of his recommendations:

There are more triple-digit gainers Ray’s recommended to his subscribers, so yeah, he’s got some credibility.

That’s why you can trust him when he says: “Over the next five–10 years 90% of all pot companies will fail.” Probably not what you were expecting to hear?

“And we’re already witnessing the beginning of this cannabis extinction event in places like California,” says Ray.

“California’s black market for cannabis is at least three times the size of its regulated weed industry,” says an article at the Los Angeles Times.

That figure comes courtesy of an audit by the United Cannabis Business Association (UCBA) that found there are only 873 licensed cannabis vendors in the Golden State versus almost 3,000 marijuana black marketers.

The UCBA came by its figures combing through data collected by the app Weedmaps that aims to plot, review and rate marijuana businesses throughout North America.

[That’s the same Weedmaps the UCBA wants California’s Gov. Gavin Newsom to crack down on, saying: “Every day that Weedmaps continues to advertise for unlicensed retailers they are putting consumers at risk and suppressing the growth and very existence of the legal market.”

Suppressing tax revenue, more like: A study estimates sales of unlicensed marijuana at almost $9 billion in 2019 compared with just over $3 billion for licensed.] 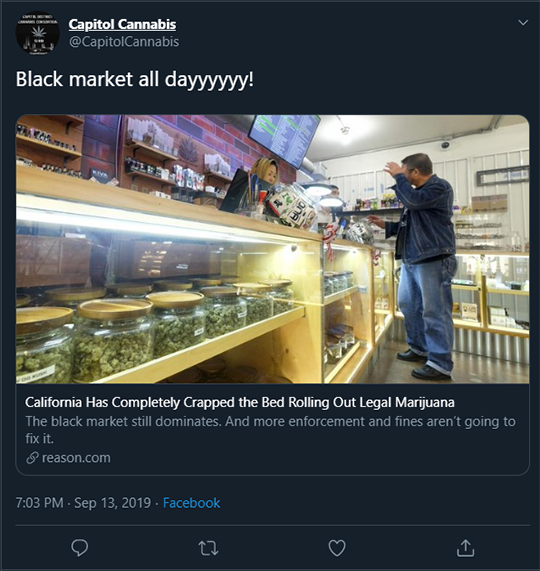 We draw your attention to the Reason headline: Quite the turn of phrase…

The 5’s followed the story of California’s ham-fisted rollout of legal recreational weed… and perhaps no one sums it up better than state Assemblyman Tom Lackey: “Right now there’s more incentive to be an illegal dispensary than a licensed dispensary.

“California’s not making it easy for business to join the regulated market.”

The state’s making it so difficult, in fact…

Ray says: “Many of California’s pot growers are facing extinction.” According to a stat at Zero Hedge: “Upward of 10,000 growers could go out of business soon.

“And that doesn’t include ancillary product producers like edible makers and dispensaries too,” Ray continues.

But Ray sees a silver lining for the marijuana industry as a whole: “The drawdown in pot… is exactly what we want to see right now.”

First, he says: “As the selling continues, many of the best names in pot can be bought at wildly low prices.

“The second reason is a little more complicated but a lot more telling.”

To clarify, Ray highlights the following chart as it pertains to the burgeoning pot industry… 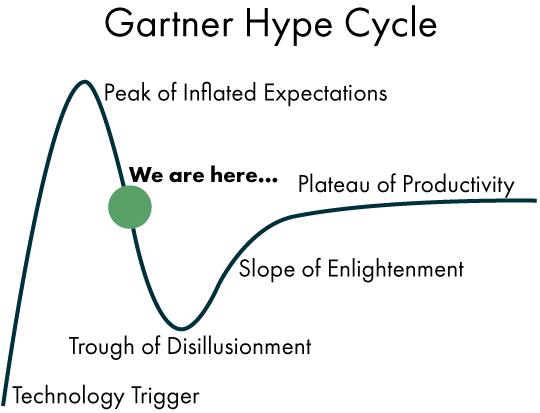 “The Gartner Hype Cycle is a graphical representation of a common pattern that arises with each new technology, innovation or industry,” says Ray.

(And we couldn’t help noticing similarities to John Bunyan’s The Pilgrim’s Progress. “Slough of Despond,” anyone?)

“If this hype cycle looks familiar it’s because we saw the same thing occur during the tech bubble,” Ray says. “Wild expectations led to a meteoric rise for many tech stocks. But a lot of the hype was overblown.”

The tech bubble burst in the early aughts and companies sunk into the slough of despond — er, the “trough of disillusionment” — and for every Amazon that climbed its way out, there were two (or more) Pets.coms that died there.

“As painful as the drawdown in pot’s been, we think it’s a great thing long term,” Ray says.

“The companies with bad fundamentals have ridden on the coattails of quality pot investments for too long,” he says. “It’s time that negative sentiment starts to weed out these weaker stocks, which in turn will bode well for the space…”

But how to distinguish between the “Amazons” of the pot industry… and the Pets.coms?

For that, we repeat what we said up top: “Now more than ever before,” Ray says, “you need an expert to help you weed through the duds to find the next big gainer.”

A precious few of these stocks, however, have already been earmarked by Wall Street insiders as ready for prime time. And this video reveals all…

Including how to play three dirt-cheap pot stocks set to explode onto Wall Street’s major exchanges.

One of the most accurate recession indicators around isn’t flickering red today…  The Chicago Fed National Activity Index report for August is available this morning.

The index crunches 85 economic numbers to get a big picture. If the number is zero, it means the economy is essentially in line with long-term historical average. Below zero, it’s underperforming. If the 3-month moving average hits minus 0.7? Yeah… that sounds the recession alarm. (The indicator’s only missed once in the last half century, by the way.)

The three-month moving average sits at minus 0.06. Nothing alarming. But the economy’s in negative territory for the seventh straight month.

“Trump’s [tweets] related to trade and monetary policy,” says an article at Vox, “have been pushing markets around.” Now JP Morgan’s figured out a way to peg Trump’s tweets to market movement (especially interest rates on 2-year and 5-year U.S. Treasuries).

The “Volfefe Index” — as JPM’s calling it — is a combination of “vol” for volatility and “fefe” for a 2017 Trump typo when he late-night tweeted: “negative press covfefe.”

(The web was temporarily obsessed; even HRC got in on poking fun, tweeting: “People in covfefe houses shouldn’t throw covfefe.” Lame-o.)

Vox says: “While… the Volfefe Index [is] a weird Wall Street attempt at a joke — what JPMorgan analysts found in their look at Trump’s tweets was not.” Tweets using the words China, billion, products, democrats and great were the most significant market movers. (What… Not bigly?)

JPM quants had this to say: “Trade and monetary policy have become an increasing focus for the executive branch, and everything from casual sentiments to seemingly formal policy intentions have been disseminated, globally and instantaneously, via this carefully scrutinized social media platform.

“In response, a broad swath of assets from single-name stocks to macro products have found their price dynamics increasingly beholden to a handful of tweets from the commander in chief.”

[Sidebar: Calling the president “commander in chief” is a common foible; the president only commands active soldiers, sailors and militia members per the U.S. Constitution. Not ordinary citizens. That’s a burr in The 5’s saddle.]

Back at the ranch… heh.

“Trump has a knack for grabbing the public’s attention,” says Alan Knuckman, our eyes and ears at the CBOE.

Alan takes a look at the Volfefe Index as it relates to “single-name stocks.” In particular, he says: “Who could forget when Trump posted this about Nordstrom in 2017…

Nordstrom canceled the first daughter’s clothing line, citing “poor performance” in February 2017. And the president didn’t take it lying down.

“JWN slipped about 1% in the minutes following the tweet,” Alan says. But a quirky thing happened when the twittersphere settled down: “Like other companies that find themselves under fire from the president, Nordstrom rallied for the remainder of the day.

“In fact, when Trump singles out a company,” says Alan, “it seems to do better with the increased attention from the market. 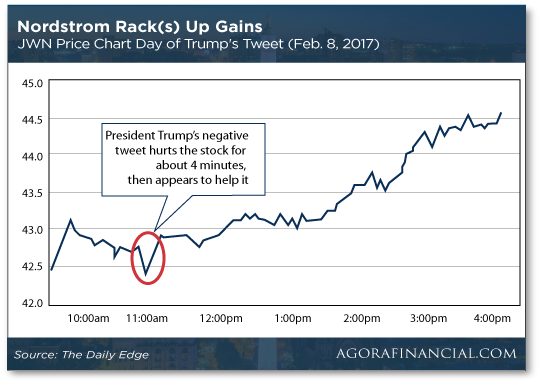 “Trump’s tweets end up only affecting stock movement for a short time. Knowing that, you can use those brief drops and pops to your advantage and book quick gains along the way.

“It’s always smart to focus on price not politics,” Alan concedes. “But I must admit, politics do have a way of seeping into the market one way or another.”

Bottom line: “Using the Volfefe Index, you have the chance to get in at a slight discount and capitalize on the price boost that follows,” Alan says.

[Trademark Tiff] Monster Energy files a notice of opposition against a 21-year-old’s startup — Monarch Energy — claiming the logos are too darn similar.

From the names alone, you might think Monster Energy — peddler of hyper-caffeinated, energy-boosting drinks — has a feeble leg to stand on.

That is, until you see the two brands… 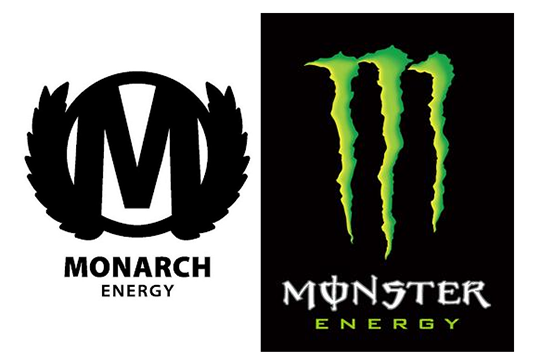 Brought to you by the letter “M”

And when you learn Monarch Energy’s backstory, Monster comes off as even more of a… monster.

Mason McGuire — a young entrepreneur who discovered he had arthritis when he was 16 years old — started Monarch Energy after taking a business course at Sierra College. Mason says: “My teacher kept saying, ‘You’ll never learn it until you do it.’”

So Mason set out “to create an energy supplement unlike those on the market,” website The Union says. Usual suspects — Monster, included — have ultra-high sugar content that can “cause a lot of inflammation,” Mason says, exactly what you don’t want if you have arthritis.

Mason’s already formulated, licensed and manufactured a limited quantity of energy tablets (that’s right, not energy drinks); after coming this far, he says he doesn’t have the money to fight Monster.

Business as usual for Monster — it’s filed hundreds of complaints, earning the company the title of biggest trademark bully of 2018 from website Trademarkia.

So… since when did Monster trademark the capital “M”? (If that’s the case, we might need to change our moniker to The 5 _in. Forecast.)

P.S. With this secret, you could have up to 139 chances over the next year to pocket a fortune — fast — with special marijuana IPOs that will get offered at absolute flash-sale discounts.

Once you see what Ray captured on camera, you too will be racing to snap up as many of these hot young public marijuana companies (at bargain-bin prices) as you possibly can.