Real estate? Stocks? Might work for some investors but they’re not for everyone. And if you try to force something to fit… 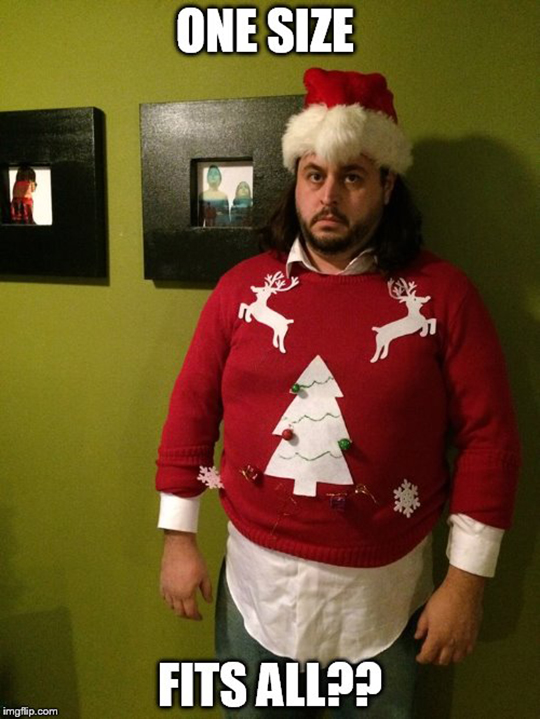 You quickly discover there’s no “one size fits all” approach to investing.

But there is one thing every investor needs: C-A-S-H.

Robert says: “An educated stock investor knows how to ‘cash flow’ with the stock market, not just invest for capital gains.” In other words, there’s a lot more you can do with stocks than simply buy low and sell high… or hold and pray!

So what’s the big to-do about cash flow? (Other than the fact that it’s cash flow, right?) To Robert’s way of thinking…

So how do you use stocks to generate cash flow? The first way’s straightforward enough (we bet you can guess).

Essentially, a shareholder is entitled to a share of a company’s profits — or a dividend — per the discretion of the board of directors. When quarterly earnings reports are made public, the board determines, first, if the company’s going to pay a dividend and, second, at what amount per share.

For instance, if a company says it’s going to give a $0.50 quarterly dividend and a shareholder owns 100 shares, the shareholder gets $50. Easy-peasy.

“So if you buy stocks that pay regular dividends,” says Robert, “you are purchasing assets that add to your cash flow.

“With enough [dividend-generating] assets, you can eventually have the income to do whatever you like, right now or in retirement.”

Income investing at its finest…

A different tact, however, requires a little more finesse: “The covered call strategy is not for the uneducated,” Robert says. “But once you get it, it’s very exciting!”

To further clarify, Robert uses an analogy from the world of real estate.

Say you own a home you’d like to sell — not immediately but sometime in the near future. A lovely couple comes along who’s willing to purchase the house in three months at an agreed-upon price.

The agreement, however, doesn’t obligate the buyers; they can walk away from the house… but you’re obligated to make the house available for purchase when the time comes.

And for your trouble, the potential buyers agree to pay you $1,000 at the end of the three months, regardless of whether they buy or sell.

If the market’s booming and the value of the house grows? The couple gets a sweetheart of a deal but you get what you want, too — you sell the house at the price you asked for. Plus, you get $1,000 for your time.

If your home’s value goes down and the couple decides not to buy, you still get to keep the house and the thousand bucks and you can put the house back on the market if you choose.

So how’s this example relate to covered stock options?

The cash flow, then, comes regardless of whether you sell your stock or not — and even whether your stock goes up or down — because you get that option premium for your time.

Robert says: “True cash-flow investing is when the underlying asset, whether it’s a house or a stock, can go down but cash flow stays fairly consistent.

“Most people’s idea of stock investing — buy, hold and pray,” Robert continues, “won’t put money in your pocket on a consistent basis.

“However, an educated stock investor knows” the rewards of “cash flowing the stock market.”

Before you read on, Robert has something urgent to share with you. He’s released his No. 1 cash flow secret of 2019.

Wait until you see this live demo that explains it all.

But you must hurry because this won’t be online for long.

Click here for all the details before Wednesday at 10 a.m. EST.

As a measure of the FANGs’ lukewarmness, Greg notes the following…

“But just because the FANGs…aren’t tracking to new highs doesn’t mean the mega-cap tech trade is dead,” says Greg. Get a load of Microsoft… 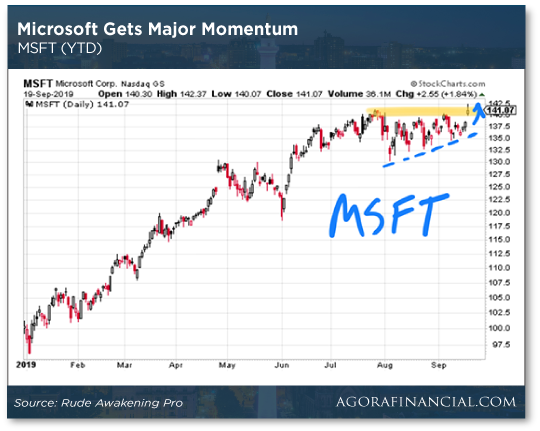 “The stock is up more than 40% year to date and appears ready to embark on the next leg of its journey.”

Greg says: “Not only is Microsoft the stock market’s most valuable player — it’s also teasing a fresh breakout to new all-time highs.”

So while the FANGs might be getting a little long in the tooth (sorry… not sorry), Microsoft’s looking positively spry.

Now there’s a 100% legal way for Americans to “jump the line” for a piece of the action before the first day of trading.

(WARNING: This is controversial, no doubt… but all revolutionary ideas are.)

Click here to see how you can make this strategy work for you.]

The Dow’s down over 100 points today (more trade war chatter). After negotiations in D.C. today, a Chinese delegate is canceling plans to visit Montana farms next week — a gesture of goodwill gone bad, we suppose.

“Are energy stocks about to experience a dramatic reversal of fortune to catch up with the market?” asks income specialist Mike Burnick.

Conventional wisdom implies shock waves in the oil market — like the one we experienced early this week — signal negative things to come for the stock market.

While Mike says yes to the first two reasons, he says conventional wisdom’s “dead wrong” about the third.

“In fact, in the three months after previous oil price shocks, the S&P 500 has gone on to post gains nine out of 10 times,” Mike says. “The median advance of those gains comes in at 5.7%.

“No surprise that energy stocks are typically big winners after a spike in oil prices. In the 10 times oil prices have surged since 1986, the S&P Energy Sector ETF (XLE) has risen 90% of the time over the next two–three months, posting average gains of nearly 8% three months later and jumping 15.6% one year later! 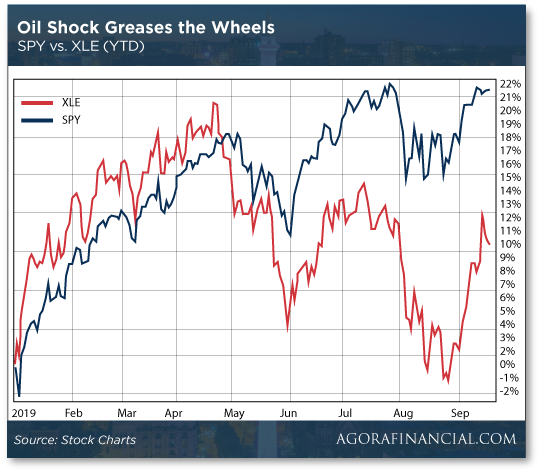 “And as you can see [from] the chart above, the spike in oil prices couldn’t have come at a better time for the beaten-down energy sector,” says Mike, that’s “barely at breakeven year to date.”

Time to take another look at how the energy sector fits into your portfolio? Mike would say so.

Today, the tinfoil set gathered at the gates of U.S. military base — and famed hotbed of alien activity — Area 51. Going viral on Facebook, the “Area 51 raid” encouraged people to swarm Nevada’s mysterious Air Force installation in the pre-dawn hours.

And with the catchphrase “Storm Area 51, They Can’t Stop All of Us,” what could go wrong?

The webpage for the event says: “We will all meet up at the Area 51 Alien Center tourist attraction and coordinate our entry.

“If we Naruto run, we can move faster than their bullets. Let’s see them aliens.”

For those not familiar with the “Naruto run,” here ya go… 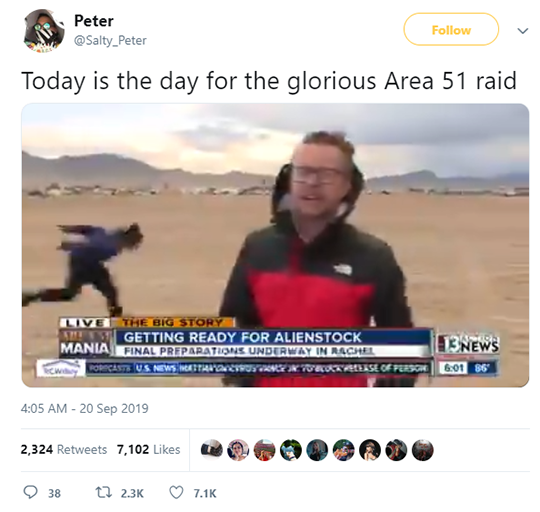 Not exactly faster than a speeding bullet, right?

“Technically, the raid was cancelled a long time ago after it started to go viral (the event page creator said it was all satirical),” reports Heavy.com, “but that didn’t stop some people from showing up anyway when the big moment arrived. Keyword: ‘some.’”

Instead of millions… dozens of people showed up at the compound’s gates. And perhaps hopped up on “liquid courage” (or other substances), the small faction made a halfhearted attempt to breach the gates.

No contest: They were stopped by police officers and one K9. Some revelers — er, Naruto runners — were detained.

No word on any alien sightings. Yet.

“I do enjoy your quips and humor that are interspersed throughout The 5, says a satisfied reader.”

“Reminds me of the witty repartee between brothers Frasier and Niles Crane on episodes of the show Frasier.

“Keep up the good work, as it's entertaining and educational at the same time.”

Wait… does that make me Lilith? Don’t answer that!

Have a great weekend. (Frasier is on Netflix, if you’re looking for something bingeworthy.)