The Fed Behind the Curtain

Another day, another emergency stopgap from the Federal Reserve.

This morning the New York Fed conjured another $75 billion from thin air to inject into the “repo” market — on top of $53.2 billion yesterday.

Repo is short for “repurchase agreement.” Repos are very short-term loans that give companies access to overnight cash using U.S. Treasuries as collateral. Banks and hedge funds use repos to finance their trading.

Basically, repos are the lubricant that keeps the financial system humming. Typically, repo interest rates are pegged very close to the fed funds rate set by the Federal Reserve, currently in a range of 2.0–2.25%. Before the Fed stepped in Tuesday, repo rates soared to nearly 10%. 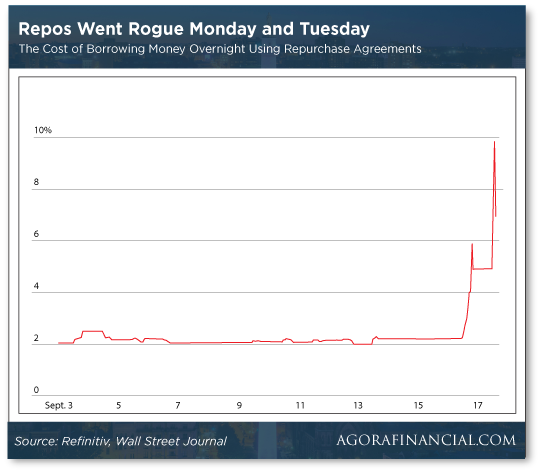 Had the Fed not intervened, market forces would have pushed the fed funds rate — the rate banks charge each other for overnight loans — higher than the Fed’s target range. Maybe not 10%, but well beyond the 2.25% limit.

Exactly why liquidity in the repo market dried up this week remains something of a mystery.

As noted here yesterday, companies were pulling out cash to pay their quarterly tax bills due Monday. And there was a high volume of Treasury debt auctioned in recent weeks that was due for settlement — a hangover from the debt-ceiling farce earlier this year.

So cash was in high demand.

On the one hand… we’re supposed to be assured the problem is nothing like the Panic of 2008, which was the last time the Fed took these measures. The Financial Times quotes a source it identifies as “a senior executive in the repo operation of a big U.S. bank.”

“This is a money markets phenomenon,” the bigwig says — “not something that has to do with perceptions of credit quality at banks or anywhere else.”

On the other hand, the factors cited above explain high demand for cash… but they don’t explain the volatility that ensued. A repo trader named Scott Skyrm tells The Wall Street Journal, “It seems like there’s something underlying out there that we don’t know about.”

For the Fed, there’s something far more important at stake than keeping the financial system’s gears lubricated. There’s the Fed’s own credibility.

The Fed said as much in this morning’s Wall Street Journal, channeled through reporter Nick Timiraos — who’s the go-to guy whenever the Fed wants to telegraph its intentions to market players.

The wild swings these last two days, Timiraos wrote, “undercut the Fed’s ability to keep the economic expansion on track through monetary policy, such as by lowering rates to provide a boost and raising them to prevent the economy from overheating.”

It’s the Fed’s iron-fisted control over short-term interest rates that’s key to everything else the Fed does to steer the economy. If the free market says those rates aren’t in line with real-world conditions, that pierces the Fed’s aura of all-knowing, all-seeing awesomeness.

“Pay no attention to that man behind the curtain!”

In the short term, the Fed is prepared to do more of these interventions to keep the gears lubricated. In the longer term, the Fed will need to return to “quantitative easing.”

As you’ll recall, QE is a form of money printing the Fed first used in 2008 to keep the financial system from collapsing. Unfortunately, Wall Street got addicted to the easy money, so the Fed felt compelled to keep it going off and on for six years.

The result was an explosion of the Fed’s balance sheet from less than $900 billion to about $4.5 trillion… as the Fed kept buying Treasury debt and mortgage-backed securities from the too-big-to-fail Wall Street firms. (Here’s the chart from yesterday if you missed it.)

The growth of the national debt is set to accelerate in the years ahead, thanks to a free-spending White House and Congress. (Bipartisanship!) Already 2019 will likely mark the first $1 trillion annual deficit since 2012.

That means a lot more Treasury debt coming onto the market as happened in recent weeks… and an ongoing potential for “dislocations” in the repo market like yesterday and the day before.

“Regardless of the reason the Fed ultimately gives for returning to QE, it will be necessary to smoothly fund rising U.S. deficits,” says colleague Dan Amoss.

“The natural investment conclusion is to buy gold if you haven’t already, because at $1,500, it hasn’t come close to pricing in the growing investor recognition that the Fed will wind up permanently holding a large percentage of the national debt — whether it wants to or not.”

Meanwhile, the Fed will issue its latest pronouncement on the fed funds rate around the time this episode of The 5 hits your inbox.

Going into this week, nearly everyone expected the Fed would deliver another cut of a quarter percentage point, on top of the cut that came at the end of July.

But a funny thing happened this week: The trade in fed funds futures — yes, there is such a thing — pointed to a rising probability the Fed would leave the rate alone. As we go to virtual press, there’s a 30% chance the Fed will stand pat with the current 2–2.25% range.

We haven’t seen a satisfying explanation. One school of thought says the jump in oil prices this week will deliver the jolt of inflation the Fed so desperately wants, rendering a rate cut moot.

We’re more inclined to think the Fed is clinging to the narrative it laid out a few weeks ago — the July rate cut is a case of “one and done” and not the first in a series of cuts aimed at propping up a weakening economy.

As it happens, crude prices are climbing down once again as it appears Saudi Arabia’s production will be back to full strength in a couple more weeks. A barrel of West Texas Intermediate trades below $59.

As we write, we’re watching the Saudi Arabian defense ministry do a dog-and-pony show for reporters aimed at “proving” Iran is behind the attack on major oil facilities in the kingdom.

Nonetheless, the war drums are beating less loudly this morning. According to Politico, “Trump is reluctant to take military action in the Middle East because he wants to live up to his campaign vows to reduce foreign entanglements, according to multiple people who speak with him regularly.”

Gee, what were we saying yesterday?

We delighted seeing the president smack down Sen. Lindsey Graham (R-South Carolina), who seems to think any problem can be solved with American air power. Graham was demanding U.S. strikes on an Iran oil refinery. 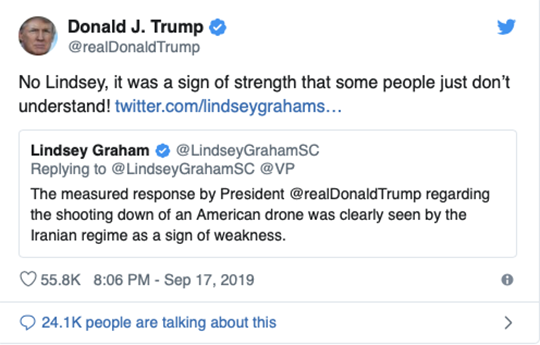 Meanwhile, oil prices seem to be climbing down so quickly the president is backing off earlier talk about tapping the Strategic Petroleum Reserve — the government’s oil stash in the salt caverns of Louisiana and Texas.

While markets await the Fed, we have two conflicting signs about the state of the economy.

On the positive side of the ledger are this morning’s figures on housing starts — up way more than expected. Ditto for permits, which are a better indicator of future activity. Seems homebuilders are finally responding to all that “pent-up demand” for new housing stock that we keep hearing about.

On the negative side is a huge miss in FedEx’s quarterly numbers. With all the packages FedEx moves, it’s an informal barometer for the economy as a whole. Alas, earnings fell short of Wall Street’s expectations. Some of that has to do with Amazon delivering more of its own packages… but more of it has to do with slower economic growth and what CEO Fred Smith calls “trade tensions and policy uncertainty.” FDX shares are down 14% on the day — ouch.

Meanwhile, the broad stock market is slightly in the red while gold has inched up to $1,508.

Speaking of Iran, the Islamic Republic is joining with Russia to step up its “de-dollarization” efforts.

Yesterday the governor of Iran’s central bank announced Russia and Iran will bypass the global payments network called SWIFT — which is effectively controlled by Washington. Last year, SWIFT cut off several Iranian banks from the system.

“The two countries will use their own domestically developed financial messaging systems — Iran’s SEPAM and Russia’s SPFS,” according to a report from Russia’s state-run RT news channel.

No, a move like that won’t destroy the dollar’s status as the globe’s reserve currency. It will be more like death by a thousand cuts, and the number is still in the very low hundreds…

A postscript to the prosecution of JPMorgan Chase suits for precious metals manipulation: Turns out one of the execs, Michael Nowak, also sits on the board of the London Bullion Market Association.

The LBMA is one of the major players in the global precious-metals trade. People who follow gold manipulation more closely than we do say the LBMA is an integral part of the scheme.

The LBMA’s website says the board “promotes and evidences LBMA’s core values of leadership, trust and integrity.” Heh…

Writes Ronan Manly from the Singapore-based metals dealer BullionStar: “Will the LBMA remove Nowak from its board of directors? Will the LBMA reprimand or expel JP Morgan from its membership list? Or will the LBMA try to cover this up by deleting the offending pages from its website?”

As we write this morning, Nowak’s profile is still up on the LBMA site. Granted, he’s innocent until proven guilty, but many other business organizations have wasted no time showing the door to people whose presence might cause “reputational damage.” Hmmm…

The ol’ mailbag is filling up with takes about the attack on Saudi Arabia’s oil industry.

From a Platinum Reserve member living in Latin America: “You wrote, ‘At this stage, a war against Iran would doom the president’s reelection chances.’ As far as the deep state is concerned, this is just one more reason to go for it.

“And overall, the current ‘Iran did it!’ screeching from the media has the same general feel to it that the Iraqi ‘weapons of mass destruction campaign’ had back in 2003. I sure hope it doesn’t follow the same course, or worse.”

Says another reader: “This bellicose nation, the USA, is what it is. Trump is dancing on eggshells as he maneuvers between war-loving congressmen and cunning liberals while trying to avoid war. Wake up, Dave!”

The 5: Oh, the poor, beleaguered president. He has no authority at all in the realm of foreign policy!

Then again, ever since the passage of the National Security Act of 1947, the intelligence community and “natsec” professionals really have set themselves up as a fourth branch of government…

P.S. Your editor’s mind wanders to an old gag by the late comedian Bill Hicks…

“Whenever a new American president is elected they are brought into a small dark room in which the 12 biggest industrial/corporate/military/economic heads are sitting.

“One of them pulls down a film screen and shows the new president a video of the JFK assassination from an angle never seen before.