There’s $162 billion up for grabs thanks to something that happened two days ago… and one of our top editors thinks you should pass it up for something even better.

We mentioned what happened briefly yesterday — the hedge fund bigwig Paul Singer taking a $3.2 billion position in AT&T. Today, it’s worth exploring his gambit in detail. There’s a lesson in how the “smart money” got that way… and how you can follow along for big gains fast.

Our Zach Scheidt explains: “By purchasing a large block of shares, Elliott winds up owning a meaningful percentage of specific companies. With that large ownership stake, Elliott has more influence on a company and can dictate changes that will grow profits.

“Elliott is demanding changes at AT&T, including selling parts of the business that aren’t producing enough profit.”

As you might be aware, AT&T is no longer just a telecom giant. With the purchase of Time Warner last year, it’s now one of the half dozen or so companies that dominate Big Media with the likes of Disney, Comcast and Rupert Murdoch’s companies.

In announcing the purchase of that $3.2 billion stake, Elliott Management also made it plain: AT&T has no clue what to do with its shiny new toys like HBO and CNN.

OK, Elliott wasn’t quite that blunt in its letter to AT&T’s suits. But it did say they “failed to articulate a clear strategic rationale” for dropping $80 billion on Time Warner.

Specifically, Elliott says AT&T has flubbed its plans to compete in the streaming wars with Netflix and Hulu — to say nothing of new offerings this fall from Disney and Apple.

“While it is too soon to tell whether AT&T can create value with Time Warner,” the letter sums up, “we remain cautious on the benefits of this combination.”

Now that Singer’s company owns well over 1% of AT&T’s shares, he can start throwing his weight around in hopes of “unlocking shareholder value.”

Basically, Singer is telling AT&T’s management and board to knock it off with the acquisitions — in addition to Time Warner last year, it bought DirecTV in 2015 — and unload some of its “noncore” assets. 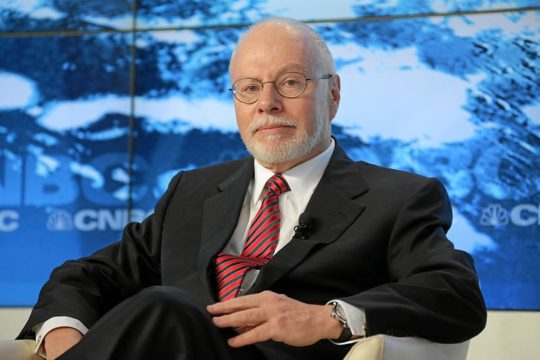 “There’s gonna be some changes around here.” [Flickr photo from the World Economic Forum — yes, he’s part of the Davos crowd]

Singer figures if AT&T does things his way, shares of T (it’s one of those companies with a single-letter ticker symbol) will fly as high as $60 each.

“That would represent a 60% gain from the current stock price near $37.50!” Zach tells us. “And considering the number of AT&T shares outstanding, a move of that size would generate $162 billion in profits for shareholders.”

And yet… despite that gain potential (and a fat 5.4% dividend)… Zach isn’t recommending you buy AT&T shares.

“At least that’s not the only play I recommend for right now,” he clarifies.

“You see, deals like the AT&T play may be making headlines on Wall Street. But this is far from the only opportunity that big institutional investors are uncovering.

“Private equity companies like Elliott Management are currently sitting on about $2.44 trillion in cash just waiting to be spent on investment opportunities. Wall Street investors call this cash ‘dry powder’ because it can trigger explosive moves in stocks when buy orders start pushing share prices higher.

“I call big investors like these private equity companies ‘front traders’ because their orders are typically placed in front of a new trend higher for shares of select stocks.”

“Our team has subscribed to several pricey research services that troll the markets looking for where these front traders are spending cash. We research each of our leads carefully to see which deals have big opportunities and which deals are less likely to succeed.”

“On top of just finding the stocks that these front traders are buying, we also look for the most profitable ways to play each deal,” he adds. “For instance, sometimes by adding option contracts to a front trader opportunity, you can increase your potential profit by 10–100 times! It just depends on how aggressive you want to be with your investment.”

Every week, Zach puts this research together into a private conference call with subscribers of his Weekly Squawk Box service — named after the squawk-box communication system going back to his own hedge fund days.

Zach’s publisher is offering special access to this service through midnight tomorrow night. To start grabbing your piece of the $2.44 trillion action, simply follow this link.

To the markets, where traders appear to be treading water until the new “D-Day” tomorrow.

As we mentioned yesterday, tomorrow’s the day the European Central Bank will likely mash the monetary gas pedal — in part to weaken the euro relative to the dollar. The dollar is the “D” in Jim Rickards’ estimation, and the move will be the newest shot fired in the currency wars he’s chronicled lo these many years.

In the meantime, the major U.S. stock indexes are all in the green this morning — if not by much.

In fact, stocks have moved very little since last Thursday — when the news arrived that U.S.-China trade talks will resume next month. 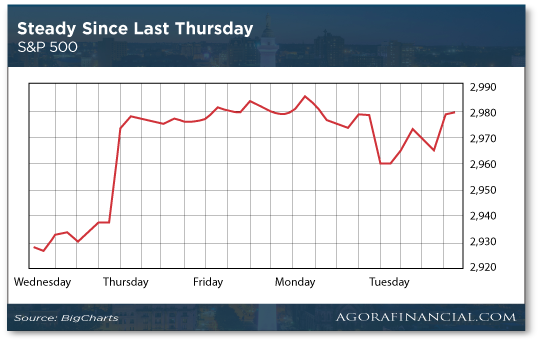 We said at the as we’ve said all year — that hopes for a “deal” are misplaced. Jim Rickards affirms that’s still the case.

“The early October date was not random,” he points out. “It follows the Oct. 1, 2019, celebration in Beijing of the 70th anniversary of the Communist victory over the Nationalists for control of China and the beginning of the regime of the Communist Party of China that continues until this day.

“President Xi did not want messy trade talks, let alone failed talks, to muddy the waters on this big celebration.”

But leaving the “optics” aside, Jim says the bigger point is that neither side appears ready to deliver meaningful concessions. “None of the big issues is any closer to a solution, and that state of affairs may last for years.

“Despite the temporary euphoria, the market will realize sooner rather than later that the resumption of trade talks is just part of China’s strategy of delay and Trump’s strategy of propping up the stock market.”

Crude sits at $57.54 a barrel this morning — having dropped about a buck after word yesterday that John Bolton was history as national security adviser.

Makes sense: With Bolton gone, a shooting war with Iran is less likely, even if the “maximum pressure” campaign of sanctions doesn’t change.

In other random market notes…

Toronto is in the midst of a years-long housing bubble that’s in danger of popping at any moment. Just not yet… 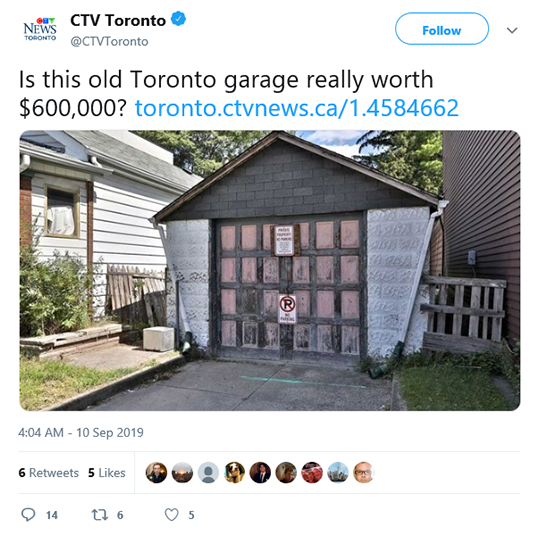 Forget the garage, we’re told. The attraction is the 20×100-foot lot in the trendy Danforth district.

“This one is a unique situation,” real estate broker Nima Kadem tells the CBC network, “and given the current fact that properties have gotten so expensive, it puts property like this in high demand — because people can buy this, put up a structure on it, and it can be a great condo alternative.”

Neighbors say they’re not shocked. “This used to be a neighborhood where first-time home buyers could buy in,” recalls Marjolyn Vanderhart, “and it’s not that anymore.”

Now to carry on a reader dialogue from yesterday’s 5: “As the ‘original reader’ yesterday, I don’t need three paragraphs to end up blaming the Defense Department (America’s largest jobs program).

“It’s common knowledge that Social Security and Medicare taxes do not equal payouts. The payouts to those two demographic groups (Silent Generation and older boomers) are substantially larger than the SS and Medicare taxes.

“They vote, they want the money and they get it. Thirty years-plus of federal debt fund it. Simple.

“Jim Rickards is absolutely correct,” a reader writes after Monday’s 5: “Central bankers have failed miserably since 2008 (and before) if we measure their results by the Fed’s ‘dual mandate’ of price stability and low unemployment. According to those two criteria, their experiments have certainly been a bust.

“But watching the banksters’ actions instead of listening to their words, their real goals seem to be different: to transfer wealth from us to them and bail out the banks. Using these criteria, they have been extraordinarily successful.

“So I struggle with the idea that central bankers don’t know what they’re doing. The front-line players are educated fools and useful idiots — and indeed their models and theories are badly flawed. But every fiber in my body tells me they’re just well-paid actors who ad-lib the script as they go.

“The executive producers sure seem to know what they’re doing! IMO, we should ignore the actors along with all the Fedspeak/jawboning theater. The private oligarchs who own them are the men behind the curtain. Their agenda is on full display.”

The 5: Seems to us the agendas aren’t mutually exclusive.

The Fed can be extraordinarily adept at protecting the big banks… at the same time it screws the pooch trying to “manage” the economy as if it were a machine!

P.S. Reminder: Private equity is sitting on $2.44 trillion in “dry powder,” waiting for the right opportunity to deploy it.

You can ride their coattails to huge riches using Zach Scheidt’s unique combination of sophisticated data and good old-fashioned legwork.

This opportunity is on the table through midnight tomorrow night. After that, we can’t guarantee it will ever be offered again.