Thursday — two days from now — is what he’s calling “D-Day.” The European Central Bank will hold one of its periodic “policy setting” meetings, much like the Federal Reserve here in the United States.

The Fed’s benchmark fed funds rate — the rate at which banks borrow from each other — is in a range between 2.00% and 2.25% right now. As you’ll recall, the Fed cut the rate in July for the first time since 2008.

Europe’s equivalent interest rate is in a range of zero on the high side and minus 0.4% on the low side — where it’s been for 3½ years.

Thursday, the ECB is likely to cut the rate deeper into negative territory. It’s also likely to resume “quantitative easing” — the purchase of government bonds — after a nine-month pause.

In this coming “D-Day” on Thursday, Jim says the “D” stands for “dollar.”

“The ECB rate cuts and asset purchases will be explicitly aimed at weakening the euro and causing the dollar to grow stronger.

“Yet those dollar gains will be reversed suddenly and turned to losses as the U.S. decides to fight back.

“When D-Day occurs, expect the euro to fall, bonds to rally and gold to get an enormous boost from the negative rates in Europe and copycat rate cuts around the world. The euro has already fallen from $1.12 to below $1.11 in recent days and is set to fall further after D-Day, perhaps as low as $1.05.” 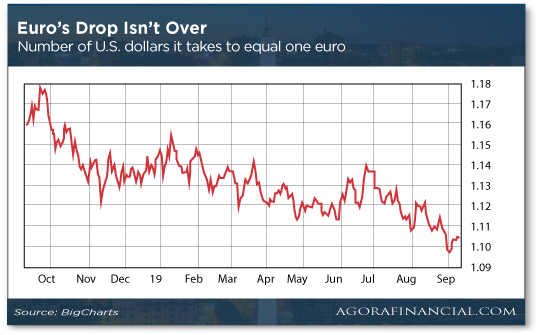 Jim says the ECB’s move will only make it more certain the Fed will cut the fed funds rate again a week from tomorrow — by a quarter percentage point. Gotta keep up with the Joneses — or the Schmidts, as the case may be.

“D-Day is bigger than just another rate cut,” Jim warns. “It’s the day when interest rate policy, exchange rate policy and the trade wars all converge.

Immediately, you can expect a tweetstorm from the White House: “Trump will be infuriated by what the ECB does on D-Day and will retaliate with threats of tariffs. Trump will also berate the Fed for not cutting rates more.”

But the response will be more than just angry tweets.

“Trump will either fight back in the currency wars by insisting on more rate cuts by the Fed or he will change weapons and fight the trade wars with huge tariffs on European exports, especially autos, electronics and wine. The higher costs imposed by the tariffs offset the lower costs achieved by the lower exchange rate.

“This is how currency wars and trade wars interact. Of course, Trump could use both rate cuts and tariffs in an all-out assault on the euro in an effort to weaken the dollar. There’s only one winner in this scenario — gold.”

If the ECB’s move on Thursday will upend markets, today is the calm before the storm.

Among the big movers is AT&T — up another 2.3% from yesterday, traders still jazzed about the position hedge fund kingpin Paul Singer is taking in the company.

Seems Singer’s not very keen about AT&T’s ambitions to become a media giant and his Elliott Management firm has taken a $3.2 billion stake with which to enforce his wishes. (When a major shareholder says you’ve got “operational and execution issues over the past decade,” you’ve got bigger problems than figuring what will be HBO’s next big hit.)

On the flip side there’s Ford — down more than 3% today because it’s a straw in the wind of the corporate-debt mess we’ve been warning about all year.

Moody’s — one of the big bond-rating firms — cut Ford’s rating one notch to junk. Cash flow is weak and sales in China are weaker, even though Moody’s concedes Ford has “a sound balance sheet and liquidity position from which to operate.”

The practical result is that every bond fund whose holdings are limited to investment-grade paper as defined by Moody’s is dumping its Ford bonds today.

Yes, that’s as messy a process as it sounds. It could get far messier because as we’re fond of reminding you, fully one-third of all U.S. corporate debt is rated just one notch above junk.

If a recession is just around the corner, small-business owners aren’t seeing it.

The National Federation of Independent Business is out with its monthly Optimism Index. It slipped a bit during August from 104.7 to 103.1. But that’s still in the top 15% of all months going back more than 40 years.

“Small-business owners continue to invest, grow and hire at historically high levels,” says NFIB President Juanita Duggan, “and we see no indication of a coming recession.”

The only cloud is the one that comes with boom times — good help is still hard to find. Asked to identify their single-most important problem, 26% of survey respondents said “quality of labor.” That’s another record high in the survey’s lengthy history. Nothing else comes close, with taxes cited by 14% and regulations cited by another 14%.

For the record: U.S. household incomes showed no improvement during 2018.

The Census Bureau has issued its annual reading of median household income — $63,179. That means half of households brought in more than that figure, half less. After adjusting for inflation, there was basically no improvement from 2017 after three straight years of growth. 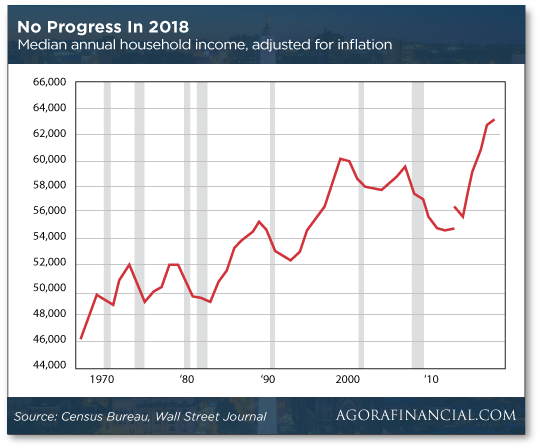 If you’re wondering about that break in the line on the chart, that’s because the Census Bureau changed its methodology in 2013. We’ll spare you the tedious details, other than to say it’s an apples-to-oranges comparison.

The folks at the Economic Policy Institute rerun the numbers each year to get an apples-to-apples snapshot — which presumably they’re doing furiously as we write. In last year’s figures, median household income still hadn’t surpassed its peak in 2007 — before everything fell apart in 2008.

“We’ve been dreaming of this for 15 years but it’s finally come true,” says British couple Lisa Grace and Adam Staples. The dream come true? Detecting a hoard of thousand-year-old coins in the Chew Valley, Somerset.

In January, the couple spent a mucky day training five friends in the ways of the metal detector when one of the novices turned up a coin of William the Conqueror.

Which would have been a good day in itself… but the group kept uncovering coins. In total, 2,528 silver coins dating from “just after the Battle of Hastings in 1066,” the BBC reports, “[that] depict both the defeated King Harold II and the triumphant William the Conqueror.” 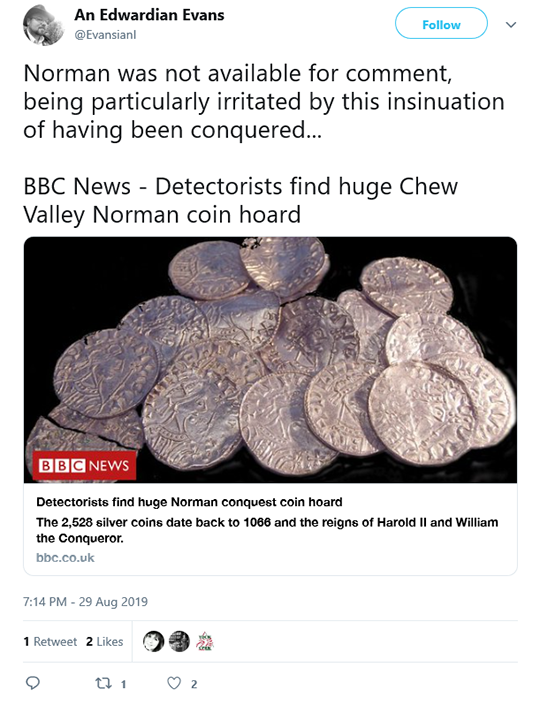 Stephen Clews — of the Roman Baths that hopes to acquire the treasure — says: “If you look at the true value of this, it’s about 500 sheep — that’s what you would have [paid]… about 1,000 years ago.”

If the Roman Baths thinks it’ll be exchanging livestock for the coins, guess who’s dreaming now?

The group of “detectorists” expects to split about $6.15 million.

To the mailbag, and a reader who wishes to pick a bone with another reader.

Here’s what the original reader said last week: “And the federal government debt ($22.5 trillion) was accumulated by taxpayers wanting bigger and bigger Social Security and Medicare payouts (around 40% of the federal budget).”

“Incorrect,” says the reply. “Both are self-funded by their own separate payroll taxes. The problem that causes the mistaken mindsets of the above-type reader is what the government does with those taxes. They are put into the general fund for the government to spend how it pleases while writing IOUs in exchange.

“That so-called 40% chunk of the national debt figure was NOT caused by ‘We the People’! It is the accumulation of IOUs due to government thievery of separate taxes we already paid and continue to pay. They then deliberately mislead us by including what is paid out in benefits to the mandatory expenditures budget, making it appear as an expense. All anyone needs to do is simply remove those benefit payouts and the true expense rears its ugly head. It is the U.S. military in its entirety. It becomes over 50% of the annual expenditure.

“Oh, and not to be a conspiracy theorist, but it’s not hard to see why the government would never want to exclude those benefits payments from the expense budget! The American people and very likely the entire world might lose their sh*t if they saw just how much of the U.S. budget goes to — ahem — ‘defense.’”

After we made a snarky/cynical remark suggesting post office boxes were used by “privacy-obsessed paranoiacs” — you knew we were kidding, right? — we heard from a couple of rural readers.

“I live in one of the many very small semi-ghost towns in Colorado and the post office box is the only way we get our mail,” says one. “There is absolutely no door-to-door delivery.”

“I prefer to pick up my mail from one rather than have to chase it clear to Nebraska,” writes another. “This may be a slight exaggeration, but not by much. I live in southeast Wyoming, which is very windy much of the 65 mph gusts are nothing here. If it can blow a train car over, think what happens to mail.

“Furthermore, I am required to have a mailbox for the junk mail sent to my home. It isn’t even at my home. It is approximately a quarter mile away on a different road from where I live. So yes, I have a P.O. Box and it is the only address I give out.”

The 5: Your mere rural existence makes you suspicious. What is it you’re hiding from?

Again, just kidding. Your editor is among the 10% of Americans who live more than 10 miles from the nearest Walmart!

P.S. As we go to virtual press, the president has fired National Security Adviser John Bolton.

We speculated two months ago his replacement might be retired Army Col. Douglas Macgregor — which would give the GOP foreign-policy establishment fits. To say nothing of GOP mega-donor Sheldon Adelson.