The $1 Trillion Swindle (And You’re a Victim)

“I’m angry right now because of the war being waged against savers,” says our income specialist Zach Scheidt.

To be sure, Zach’s been angry for a while. The Federal Reserve’s experiment with ultralow interest rates ever since the Panic of 2008? It’s ruined retirement for millions of people.

Just look at the rates you could collect on a super-safe CD 30 years ago… compared with the present era. 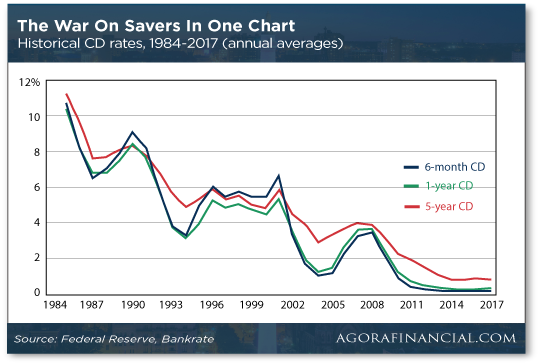 That means if you want to collect, say, $100,000 a year during retirement, you need a far larger nest egg now than in the past.

Zach is so upset he recently reminded us about a two-year-old story from The Wall Street Journal. 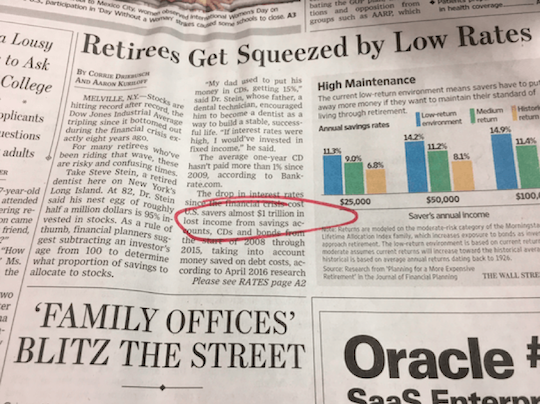 No need to squint. It says: “The drop in interest rates since the financial crisis cost U.S. savers almost $1 trillion in lost income from savings accounts, CDs and bonds from the start of 2008 through 2015.”

Staggeringly, that $1 trillion swindle — as of 2016! — was more than double the figure only two years earlier.

The research was done by Swiss Re, the giant reinsurer. (Reinsurance is, essentially, insurance for insurance companies.)

True, interest rates started rising — sloooowly — after 2015, but they’re still at historically low levels… and now they’re falling again! Who knows how much the swindle totals now? (Near as we can tell, Swiss Re has not updated its research since.)

And in any event, Zach tells us the number on this swindle is actually understated.

“That’s because the study offsets retirees’ losses by the benefit of lower interest rates on debt balances. In other words, if you’re carrying a large amount of debt, you’ll supposedly pay less in interest expense.”

But most retirees — the ones who aren’t desperate, anyway — aren’t shouldering a huge debt burden. “If you’re a responsible saver and you’ve set aside money for retirement,” says Zach, “chances are good that you’ll have very little debt to pay interest on.”

So you get all the pain and none of the benefit. Just swell.

While you might think the Fed blundered into swindling you, make no mistake: This was the plan all along.

“One of the ways retirees are ‘fighting back’ against this low interest rate policy is by investing in speculative stocks,” Zach says.

“The idea here is that as long as the market continues to trade higher, these speculative stocks will offer big gains. And those big gains will hopefully offset the $1 trillion of interest the Fed has stolen.”

This is exactly what the Fed wants you to do. In 2010, Fed chairman Ben Bernanke made it plain as day in a Washington Post Op-Ed: “Higher stock prices will boost consumer wealth and help increase confidence, which can also spur spending.”

“But what happens when the market trades lower?” Zach interjects.

“We know from history that eventually the market will decline. Stocks don’t simply go up indefinitely in a straight line.

“Unfortunately, the ebb and flow of the market will hit retirees especially hard. That’s because retirees need income today to cover life expenses. As a retiree (or future retiree), you may not have years and years to wait for the market to rebound.

“You need income to be able to eat — and to enjoy your retirement years — today!

“But unfortunately, the Fed’s low interest rate policy has pushed retirees out on a limb — a limb that is dangerously close to snapping.”

OK, enough kvetching. You subscribed to an Agora Financial publication for things you can actually do to preserve and grow your wealth in this nutso environment.

Because The 5 is a free supplement to your paid publication, we can’t get too deeply into specifics. But we can point you in the right direction.

“Take a balanced approach to investing,” Zach advises. “Place a portion of your savings in solid dividend-paying stocks with stable businesses. Invest in high-yield bonds that give you legally guaranteed income (and trade separately from the stock market’s swings). And consider using a nontraditional income-generating strategy to pull instant cash payments from the market.

“In short, it’s time to take control of your retirement and fight back against the trillion-dollar war on savers.”

Tomorrow, with Zach’s help, we’ll dig a little deeper for solutions. Or if you don’t want to wait, you can check out how to collect checks of up to $7,980 if you act in the next four weeks. Zach explains when you click here.

The major U.S. stock indexes are clawing back some of yesterday’s losses.

At last check, the Dow, S&P 500 and Nasdaq are all up about two-thirds of a percent. They’re still solidly within the trading range we plotted on a chart for you yesterday. No drama.

Even “market-moving” news can’t move the needle on specific stocks — we’re thinking Walmart’s decision to stop carrying rifle ammo and Google’s cost-of-doing-business fine of $170 million for scooping up children’s data on YouTube. Both of them are up slightly on the day.

The main economic number is the trade deficit — $54 billion for July, a little bigger than expected. That won’t help the third-quarter GDP number.

Hong Kong’s stock market leaped 4% on the day after Chief Executive Carrie Lam finally withdrew the extradition bill that set off all those protests this summer. That said, it’s unlikely the protesters are going to pack up and go home now…

With interest rates trending down, corporate America is loading up on still more debt.

Only yesterday, U.S. companies sold nearly $28 billion in bonds. That compares with $84 billion for all of last month. And we’re talking big companies, too — Disney, John Deere, Caterpillar, Capital One, the CSX railroad.

For a good nine months or so, our ex-investment banker Nomi Prins has been warning about the buildup in corporate debt. Only about a third of all corporate debt can be considered “quality.” Another third is rated BBB — one notch above junk — and the final third is in fact junk, with a high risk of default.

But with rates coming down, clearly the attitude is “party on.”

The one name that caught our eye is Caterpillar. That’s because CAT stock throws off a dividend yield of nearly 3.5%. The debt issued yesterday almost surely carries a lower interest rate than that.

So look for CAT to use the money raised yesterday to buy back its own stock and retire some of those high-yielding shares. The announcement might well come during its next quarterly report due in six more weeks. That should give the share price a nice little bump.

CAT would be following the playbook of Intel — which in 2012 borrowed $6 billion at rates as low as 1.35% so it could retire shares paying a 4.3% dividend. It only makes sense. Well, in a nutso environment of crazy-low interest rates, anyway…

No matter how tumultuous the outcome of Brexit, Britons will be assured a steady supply of Legos for the holidays. 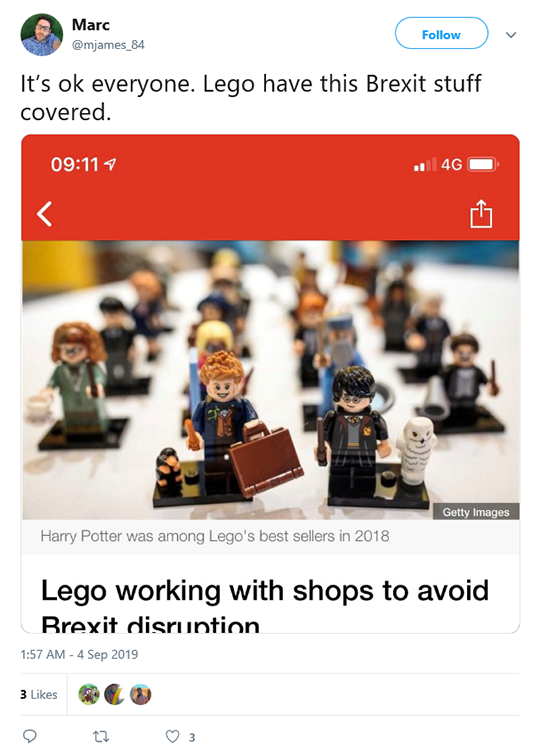 The latest Brexit news, by the way, is that Prime Minister Boris Johnson is proposing a general election next month — which strikes us as basically a do-over of the Brexit referendum, but that’s just us. (Checking our screens, the pound is up nearly 1% against the dollar, a hair short of $1.22.)

The prospect of the U.K. “crashing out” of the European Union with no deal has set off mild panic about whether goods will make it in and out of the country after Oct. 31 — to wit, the “Brexit boxes” Emily mentioned last month.

That’s a potential problem for Denmark-based Lego: “Lego imports its bricks into the U.K. from the Czech Republic, Denmark and Hungary,” reports the BBC, “suggesting it could be at risk from new trade barriers.”

But Lego chief Niels Christiansen tells the Beeb not to worry: “”We have been working with customers to make sure the flow of product won’t be disrupted,” although he didn’t care to lay out any details.

In the bigger scheme of things, times are good for Lego. The firm plans to open 160 new stores worldwide. Here in the States, at least in a few select locations, it hopes to fill the void left by Toys ‘R’ Us. (As long as corporate debt is on the brain today, we’ll remind you Toys ‘R’ Us collapsed not because of less foot traffic but because of a heavy debt load.)

Memo to Tesla: Next time you update your app, don’t do it while people are trying to get home from Labor Day weekend.

Many Tesla owners use a smartphone app to unlock their cars. The app went down for about four hours Monday evening. Tesla owners were not amused. 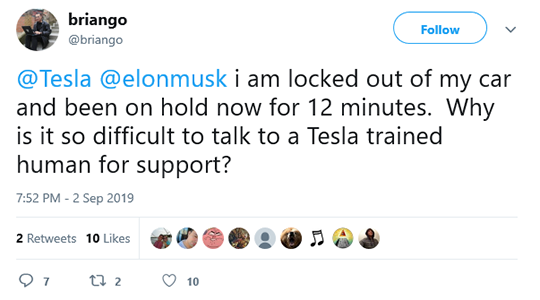 One woman told the Bay Area’s NBC affiliate that she took an Uber to get home.

No word exactly why the app went down, and Tesla’s not saying. There are unconfirmed reports the app was taken down for routine maintenance. Great timing!

“While Tesla’s app helps you unlock the car,” says a story at The Next Web, “you can still use a key card, an option key fob or the app without needing to connect to the internet. But some people who didn’t have the key card or the fob and were logged out of the app had to wait.”

This is all a little mind-boggling to your editor — who is no Luddite but who appreciates the relative simplicity of driving a seven-year-old compact or a 15-year-old SUV, depending on the season. Too many potential points of failure with an app, seems to me.

Beyond that, there’s the whole issue of surveillance and control.

If most of the time you’re counting on an app with internet access to unlock your car… well, there’s the potential for someone to remotely lock you out of your car and there’s nothing you can do about it.

It might be a hacker who breaks into the automaker’s servers. More ominously, it might be the automaker acting on government orders. Do something to step out of line and you won’t be able to step into your vehicle.

Too paranoid? What do you think? Drop us a line.

On a day when the lead item on The Drudge Report is about the feds considering a Chinese-style “social credit score” using Amazon’s Echo “smart speakers” and other devices to determine whether you can buy a gun… it doesn’t seem too far-fetched.

You’ll want to act quickly, though. There’s room for only 100 people to join today.

These spots are available only on a first-come, first-served basis.

Click here for your invitation before it’s too late.