“It’s amazing how your mind cuts to the bare essentials when you have limited time and the element of survival is thrown into the equation,” says Nomi Prins, our recovering investment banker.

As of late this morning, Hurricane Dorian has finally gotten off the dime and is tracking slowly northwest. And it’s growing in size. Hurricane warnings already in effect for much of Florida’s Atlantic coast now cover much of South Carolina’s coast as well; tropical storm warnings cover Georgia and North Carolina.

Wherever you are today, we hope it’s not in harm’s way. And today’s as good a time as any to think about what Nomi calls “the four life and wealth essentials.”

During a talk this summer at the Sprott Natural Resource Symposium in Vancouver, Nomi described her own brush with disaster.

“I had to quickly evacuate my home during California’s Thomas Fire of December 2017,” she recalls — an event that scorched more than 281,000 acres.

First miscalculation: “I barely had any gas in my car.”

Yes, she knows well the advice about never letting the tank go below half-full. But how many of us follow it with 100% consistency? “On the Monday night the fire started,” she confesses, “I had put off filling my tank during the weekend.

“So there I was, having dinner in the lower part of a small town about 75 miles northeast of Los Angeles. Our home is on a steep hill and the road leading to it was increasingly being consumed by hungry flames. I had just enough gas to drive back up the hill, bundle our dogs in the car along with whatever else I had time to take and leave for the safety of our friend’s home.

“After a harrowing night deciding whether to escape our town the next day or stick it out, I realized that gas was going to be a real problem. All stations were closed but one, and the line for that was immense. But it was a line I had to join. After tanking up, we drove to Los Angeles for the duration of the fire.”

In the end, her home survived. But the residue of the smoke was so intense she opted to move to lower ground.

“This experience reminded me of the essentials needed for life and wealth,” Nomi goes on.

The first is energy. “You won’t get very far without gas. Without electricity or flashlights, you won’t see very well at night. And you certainly won’t be able to access the internet or get cash out of an ATM if the power lines are down.”

Next is liquidity. With power out by the first night, Nomi says ATMs were useless. “Luckily, because I simply don’t trust that banks will allow withdrawals if they are faced with another major crisis, I always keep some cash with me in case of emergencies. Having cash means you can buy the bare necessities like gas, water or food (credit cards won’t work when there’s no power since the machines to process them are down).”

Don’t forget about hard assets. “I took hard assets like my gold and silver coins along with my jewelry that could easily be transported in the back of the car – in case the house burned down.” And in the bigger scheme of things, “having precious metals like gold and silver as part of your portfolio is important for your diversification.”

Finally, you have to have a plan. “Whether in life or for your personal wealth and family’s well-being, planning is critical. That goes for next week or next year and beyond. Be aware that a crisis can occur at any time, so be as prepared as possible.

“When you are in a physical emergency situation, those essentials are just that,” Nomi concludes. “It is necessary to have a source of power, liquidity, tangible or hard assets to sell in exchange for liquidity and a plan for tomorrow and beyond.

“Regarding your wealth, it’s the same thing. That’s why it’s always a good idea to invest in some form of power (because people will always need it), have liquidity (cash) and own something that you can use or retain as it grows in value. Finally, have a plan – regardless if the markets or economy is rocky or enjoying a stable period.”

To help build wealth for future emergencies, you’ll want to look into the strategy Nomi rolled out this summer. Since launch in mid-July, there’ve been only four trades — but oh, what trades they were.

Curious? Figured as much. If you haven’t explored this strategy yet, Nomi walks you through it in detail at this link.

With Wall Street’s trading pros back on duty after summering in the Hamptons, the safety trade is in full swing this morning — stocks and crude down, gold and bonds up.

It being the first business day of the month, the baig economic number is the ISM manufacturing index. As a reminder, numbers over 50 indicate a growing factory sector, below 50 a contracting one. The number has been falling steadily for a year.

Still, not one economist among dozens polled by Econoday was expecting a sub-50 “print” today… and that’s exactly what happened. The number rang in at 49.1, the lowest since January 2016.

Going into today’s action, here was how our chart hound Greg Guenthner summed up the S&P’s movement the last few months. Even with today’s drop, the index remains range-bound between roughly 2,830 and 2,950. 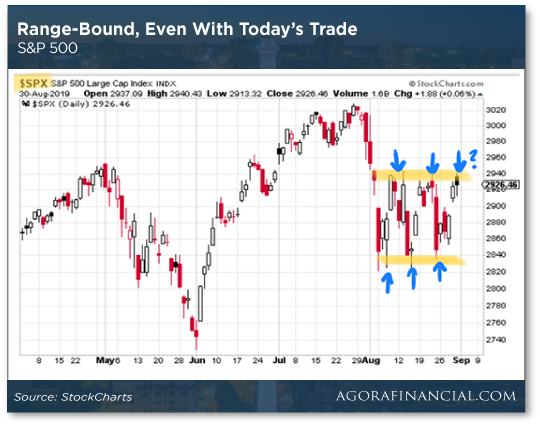 So now what? “As long as this bottom base holds and we continue to test and reject the lows, this is a positive sign for the macro market,” says our Alan Knuckman from his perch in the Chicago options trading pits.

Crude is also caught up in the sell-off, a barrel of West Texas Intermediate down more than 3% at $53.41.

Traders are also scooping up Treasuries, pushing yields down. The 10-year note just cracked below 1.44%. That’s not too far off the all-time record of 1.38%.

Currency markets are aflutter with the latest Brexit drama from London; Prime Minister Boris Johnson just lost his majority in Parliament after a Conservative MP defected to the Liberal Democrats. The pound trades below $1.21, levels last seen right after the Brexit referendum in 2016.

The blaring headlines about “China’s ban on gold imports” turn out to be a big zero.

“About three weeks ago,” our macro maven Jim Rickards tells us, “I was flooded with inquiries concerning an announcement by China that they were banning imports of gold.”

On the surface, it makes no sense. As we’ve long chronicled here, China’s central bank has tripled its gold reserves over the last decade — and that’s just the official numbers. So did Beijing suddenly lose interest in accumulating gold?

Hardly, says Jim. “The announcement had nothing to do with gold and everything to do with capital controls and trying to preserve China’s depleting reserves of hard currency. China’s reserves dropped over $1 trillion in 2016 due to capital flight. Excluding precautionary reserves to bail out its banks and certain illiquid assets, China has only about $1 trillion left to defend its currency and pay for imports.

“China is suffering a dollar shortage today both because of capital flight and because its trade surplus is drying up due to Trump’s tariffs and the trade war. Banning gold imports was a way to hang onto dollars.”

Besides, China has already eased the ban, according to the Reuters newswire — citing sources in London and Asia. “Limited permits have now been granted to begin importing some gold,” Jim explains, “but in smaller quantities than in the past.

“China is between a rock and a hard place. On the one hand, it wants to preserve its dollar reserves. On the other hand, the demand for physical gold in China is too strong to cut off completely. The irony is that a lot of the gold that comes into China via the front door soon leaves through the back door via illegal smuggling and other forms of capital flight. In the end, China loses the dollars and the gold.”

We’re a little behind the curve bringing you this item after the holiday weekend, but here’s how much you paid in gasoline taxes depending on where you filled up… 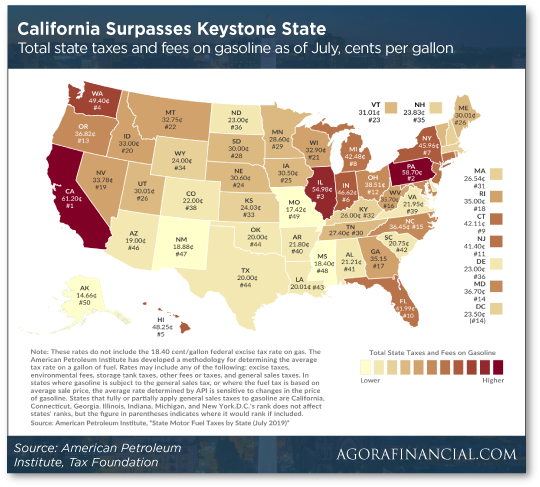 Click on the map to enlarge if need be. Since the last time we brought you this map, California raised its gasoline tax on July 1, bringing total state taxes and fees on gas to 61.2 cents a gallon. That knocks Pennsylvania off its pedestal for having the highest gas taxes in the country.

Illinois, meanwhile, has vaulted into third place with an increase that also took effect in July.

In your editor’s home base of Michigan, Gov. Gretchen Whitmer’s proposal to jack up the gasoline tax by 45 cents a gallon appears to be dead. (That would have raised total state taxes and fees to 86.13 cents a gallon.) But given that she won election last year on a platform to “fix the damn roads,” Michigan is still likely to climb up the list…

And now a new cautionary tale about the present era of “hall monitors for adults.”

Last week, Twitter terminated the account of Daniel McAdams — who was a longtime aide to Rep. Ron Paul (R-Texas) and is now executive director of the Ron Paul Institute.

“They said I would not be reinstated,” he writes in an email to the Target Liberty blog. “My crime? I called Sean Hannity ‘retarded.’ But do a Twitter search on use of the term and you will see it’s use[d] millions of times with impunity.”

Hmmm… We speculated three months ago that if The 5 had a Twitter account, it wouldn’t last long. With this latest episode, we can’t help thinking how Agora founder Bill Bonner routinely speculates whether Donald Trump will go “full retard” with the trade war. Guess Bill wouldn’t last long, either. Ridiculous.

Having said that… For the record, The 5 refrains from the term, for a host of reasons. Not least of which is that we remember a leading supporter of Dr. Paul who happened to have a developmentally disabled daughter taking grave exception to seeing his fellow supporters being maligned on the interwebz as “Paultards.”

Gotta say he had a point…

P.S. Just saw a note from the aforementioned Nomi Prins: Her strategy did not serve up a new trade this week.

That’s how it’ll go some weeks. But when you’re batting 1.000 — four winners in four trades since mid-July, with the average gain 108% in a single day — you probably wouldn’t complain too loudly, right?

Nomi shows you how this revolutionary strategy works when you follow this link.