EU Squares off With FAANG

We check in today on the goings-on in Europe… that just might be the overlooked stepchild in the global trade war — while the soap opera that is the U.S.-China trade dispute plays on.

According to the EU’s lengthy plan — obtained by Politico — members of the European Commission are pressing President-Elect Ursula von der Leyen to establish a $100 billion European Future Fund to invest in “high-potential” European companies.

“The goal: get Europe competing head-on with the American and Chinese tech giants it has lagged behind for decades,” Politico says.

Europe has certainly trailed American tech colossi like Facebook, Apple, Amazon, Netflix and Google — with their market caps over or approaching $1 trillion.

China makes its appearance in the EU proposal, too, with the report specifically calling out Chinese companies Baidu and Tencent.

To which the document says (rather drolly, we think): “Europe has no such companies.”

Ahh… that dry, British sense of humor… er, strike that.

“The shadow of Brexit — the United Kingdom… due to leave the European Union on Oct. 31… looms over the proposals,” Politico says.

“Without U.K. influence,” the article continues, “the EU is free to pursue the more interventionist economic policies France and Germany have long favored…”

Likewise, the plan turns up the heat on China.

In a thinly veiled reference to the Asian powerhouse, the document allows more leeway for EU countries to subsidize companies to thwart “the emergence and leadership of private non-EU competitors, with unprecedented financial means, [that] has the potential to obliterate the existing innovation dynamics and industrial position of EU industry.” (*out of breath*)

So back to Brexit: “As an EU member [for now], the market-oriented U.K. would almost certainly veto any such proposals.”

“One very interesting byproduct to the trade wars… is that other nations are actively seeking ways to bulk up their economic futures without relying as much on the U.S.”

Nomi says: “This is both a defensive move in the near term and a proactive one for the future.”

The European Commission’s proposal to fund promising companies — to the tune of $100 billion? “The upshot would be firms… that are positioned to compete with dominant American and Chinese tech companies.”

And competition’s a good thing, helping investors diversify their portfolios. (Be honest: Have you scaled back your foreign investments in the past few years?)

“What this means for you is that regardless of economic slowdowns,” says Nomi, “there could be upside in EU tech companies targeted by the plan, whether they reach the size of Amazon or just grow as a result of an external capital injection.”

[Ed. note: Looking for more ways to diversify your portfolio? One of the best ways to do so is Nomi’s revolutionary new trading strategy, unveiled only a few weeks ago.

Her system generates a new trade every week. To give you an idea, three trades have already generated gains of 43%… 70%… and even 214%.

Nomi walks you through how the system works — removing any guesswork — and making it so easy, she says you can make money while you sleep.

Click here to see a live demo of an everyday American DOUBLING his money.

You could do the same next Tuesday morning… Hurry and click before Tuesday at 10 a.m. EST to see how it’s done.]

“If you’re reading this,” says Agora analyst Greg Guenthner, “you survived a painfully volatile trading month where everything that could go wrong did exactly that.

“I’m sure September will bring its own surprises,” Greg says resignedly.

Most financial wonks are stymied, he believes, by trade war concerns and the specter of a global financial downturn, because of which, “the major averages remain trapped in a range below all-time highs. 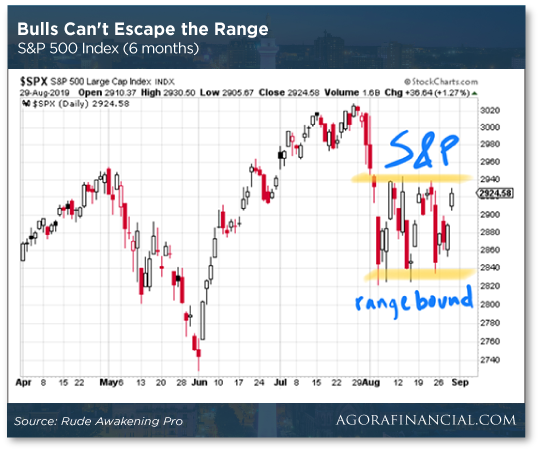 “The bulls made an honest push Thursday,” says Greg. “But overall, the bigger picture hasn’t changed.” In fact, the “big picture” might go through its blue period soon enough if Trump’s cryptic remarks have any bearing.

“Let’s see what the end product is,” the president continued, “that’s what you have to judge it by.”

“Once again,” says Greg, “we’re stuck waiting on potential tariff news heading into the weekend.” Where the trade war goes, nobody knows…

Aaand the market seems to be holding its breath today as the Dow’s gained eight points to 26,370…

“Whether you’re feeling on edge about the market or not,” says our colleague Aaron Gentzler at The Rundown, “a basket of stocks to take note of so far this year is discount retailers.

“It’s no secret brick-and-mortar stores have been slammed by Amazon’s dominance. Articles about the ‘retail apocalypse’ run just about weekly,” says Aaron.

According to a Zacks Equity Research report at Yahoo Finance: “Despite these odds, the stocks in the retail-discount stores industry have shown resilience in the year-to-date period.

Aaron says: “Looking for specific stocks in this subsector? One of our favorites — Dollar General (DG) — is included. Also, Target, Walmart and Ross Stores.”

Aaron follows up on Dollar General today as the stock revels in a post-earnings glow. DG sales and earnings were both notably higher than expected with the company announcing 4% growth in same-store sales, beating the consensus estimate of 2.5%.

Like we said, Aaron’s a fan… and, at The Rundown, he’s been following the company this year, shining a light on the following:

(Dec. 28, 2018) “In Dollar General’s third-quarter earnings report, the company’s execs said it anticipated positive sales growth in each of its stores. Looking ahead to 2019, DG will…

(May 24, 2019) Aaron highlighted a snippet from an article at Fortune: “By serving the bottom of the nation’s economic pyramid, Dollar General has generated one of the top performance records in retail.

“In 2018, the company reported its 29th-straight year of same-store sales growth — despite minimal e­commerce.

Which brings us to today…

“And the hits keep coming for Dollar General,” says Aaron. Shares rocketed yesterday, up about 8% — this despite trade war jitters.

The roundup of protest leaders went down yesterday and included fresh-faced 22-year-old Joshua Wong, whom Dave mentioned at The 5 over a week ago. 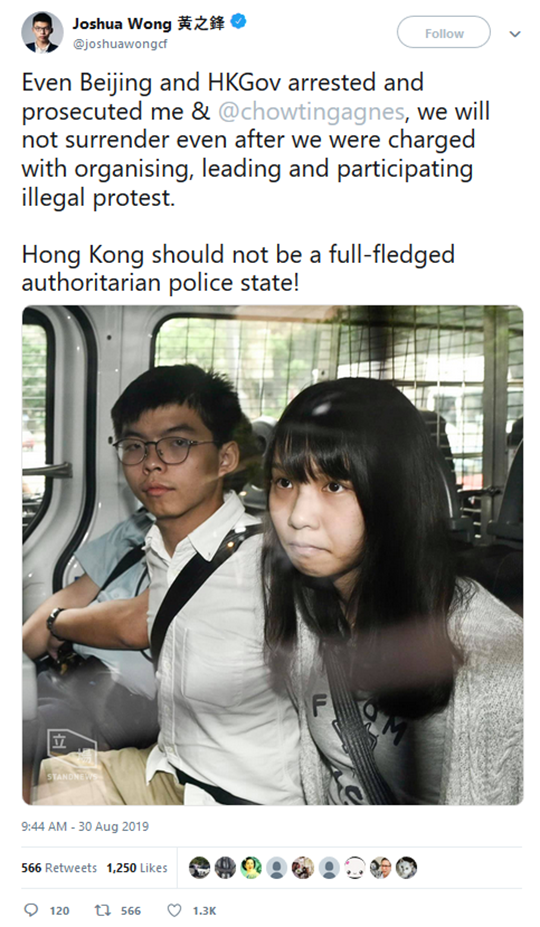 Wong is part of the pro-democracy party Demosistō and was a key figure in student protests back in 2014.

Wong’s out on bail this morning, telling reporters: “The Beijing government are the ones who back and endorse Hong Kong police to conduct such a mass arrest and prosecution.”

For their part: “Police representatives… offered a clear warning to the city’s residents, saying that anyone who takes part in an illegal assembly could be charged with a crime, punishable by up to five years in prison,” Bloomberg reports.

From consequential to trivial: What do retiring quarterback Andrew Luck and the second most-winningest Jeopardy! contestant have in common?

Perhaps you were as surprised as we were this week upon learning Indianapolis Colts quarterback Andrew Luck — at age 29 — decided to retire from professional football.

(When he heard the news, I saw my husband do a literal double-take!)

But — if you’re a fan of the game show Jeopardy! — we bet you were more surprised when longtime champ James Holzhauer, who appeared on 33 episodes this spring, finally lost.

Here was the Final Jeopardy! clue that proved to be James’s undoing: “The line ‘a great reckoning in a little room’ in As You Like It is usually taken to refer to this author’s premature death.”

All contestants answered correctly: “Who is Christopher [Kit] Marlowe?” But… James didn’t wager enough. A strange turn of events for a professional gambler.

I remember saying to my husband: “He threw the game!” 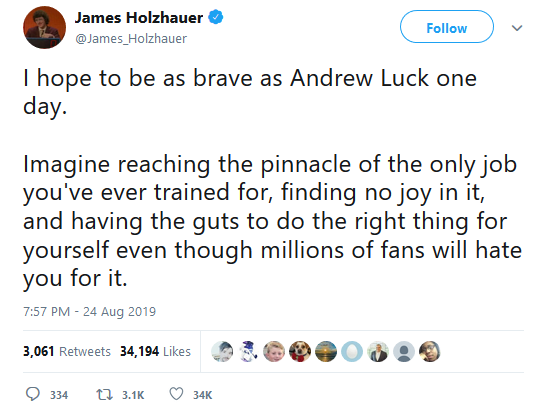 More than a little cryptic, to be sure, but something to ponder over the Labor Day weekend.

Speaking of, The 5’s taking the day off but we’ll catch up with you Tuesday.

P.S. We have some urgent news…

Ever since former investment banker Nomi Prins released this video, Americans like you have had the chance to make ridiculous amounts of cash.

It’s real. It’s happening now. And we don’t want you to miss out.

Time is of the essence. Click here before Tuesday at 10 a.m. EST.