We noticed a compelling trend last week: Despite the markets’ stomach-churning gyrations last Monday, gun stocks seemed to float above the fray. This even after the heinous mass shootings in Ohio and Texas over the weekend.

A head-scratcher… but not unprecedented. 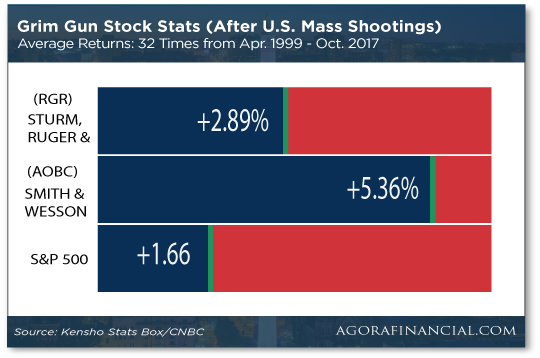 Since the awful events at Columbine High School in 1999 — and 32 other mass shootings in the U.S. through 2017 — on average, RGR shares rose about 2.9% while AOBC stock gained almost 5.4% in the month after mass shootings.

Stats aside, buying gun stocks might’ve been prompted by a Trump tweet about gun control. 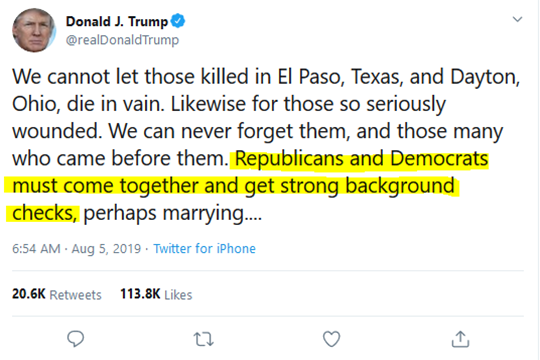 Seems incongruous, but talk of gun control often means an uptick in sales for gun-makers. Here’s how that works: People already considering buying a firearm finally pull the trigger on their purchase, fearful of more restrictions down the road. (Sorry ’bout the pun.)

Other stocks that seem insulated from the vagaries of the broader markets?

Ray Blanco says: “We are starting to see some divergence this week as earnings roll in and folks slowly start to realize pot stocks offer a safe haven from stocks subject to heavy swings every time Trump tweets.”

In further evidence of the pot industry’s “divergence,” Ray emphasizes some of his favorite pot stocks were exploding last Tuesday — while the S&P 500 was barely digging out from Monday’s sell-off.

“Which brings me to a different point,” says Ray. “Cannabusiness isn’t really exposed to the escalating U.S.-China trade war… at least not fundamentally.

“Cannabis stocks in general are about as local as it gets when it comes to publicly traded names.

“Many companies only operate in a limited geographic area — sometimes just one state.

“Other U.S. cannabis companies are multistate operators and still grow pot in the U.S., process in the U.S. and sell in the U.S.,” says Ray. As for our fully legal neighbor to the north: “In Canada… we’re still pretty much talking about just that one market for companies…”

While the Marijuana Index has some obvious advantages over the broader market — to be sure — pot stocks have been taken to the woodshed this summer.

But Ray believes: “There’s good reason to think we might have finally hit bottom for this summer’s sell-off, with shares of publicly traded cannabis companies rebounding strongly this month.”

In Ray’s opinion, the worm has turned in August, “and we could see this market make new highs in the second half of the year.”

Add to that Aurora Cannabis’ rosy outlook for Q4 of fiscal year 2019: “The company expects revenues for the quarter to come in at C$100–107 million. That’s not peanuts,” says Ray, “and it’s a far cry from the C$19.1 million the company reported for the fourth quarter of 2018 — that’s a fivefold increase!”

Ray concludes: “Lots of earnings reports to look forward to this week, which could be the spark we need to ignite some buying in the space.”

As earnings trickle in, Ray’s got you covered. “Of course, we’ll be right here with the most important news you need to see.”

And if you’re a reader at The 5, you should know: Ray says, “Now might be one of the best times to invest in pot stocks — ever.”

You need to see his latest presentation that’ll help you become a marijuana-industry mastermind.

Well, that didn’t last long… Trump’s tariff postponement — to reportedly pad the Christmas shopping season — only propped up stocks for fewer than 24 hours.

Of course, as the Dow’s shed about 600 points now, the long-faced stockbrokers are back. Take, for example, this headliner at CNBC… 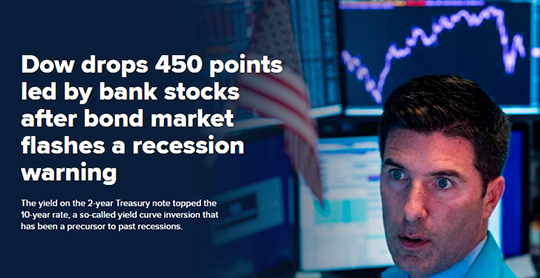 *Gulp* His eyes must really be popping now.

In case you missed it, heh, the “recession signal” — or the ominous-sounding inverted yield curve — has been plastered all over financial media.

To catch you up to speed, the yield curve inversion happens when the yield for a 2-year Treasury note is higher than that for a 10-year. And looks like this… 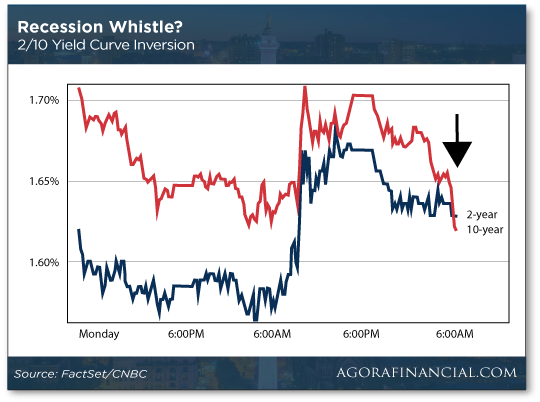 Conventional wisdom says recession generally follows this chart anomaly, on average, in 22 months. But if you’re a reader at The 5, we’ve been sounding the alarm about the end of the boom phase of the boom-bust cycle for months now…

“From a short-term perspective,” he says, “gold has marched steadily higher since early June. It’s consolidating just below its highs this morning. 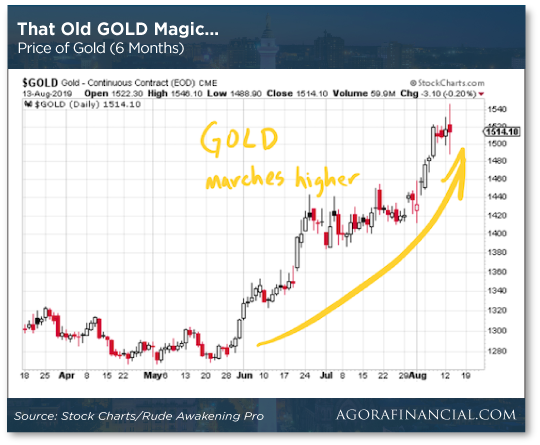 “Volatility in world markets and no signs of relief in the trade war should help push the price of gold higher heading into 2020,” says Greg.

“The company produced 1.35 million ounces of gold and 97 million pounds of copper,” Dan reports. “Management expects Barrick to hit the upper end of its production guidance range for 2019.”

Dan notes Barrick’s Q2 earnings of 9 cents per share were hinged on the average gold price of $1,309 per ounce. “With gold starting the third quarter closer to $1,400 and heading higher,” he says, “third-quarter earnings, due in early November, should be spectacular.”

With one caveat… the risk of Barrick’s Veladero mine in Argentina.

“Investors panicked about the rising odds that the pro-business Macri administration will not be reelected in October.”

If the opposition leader Alberto Fernandez wins the election, Dan predicts an even weaker peso precipitated by a massive debt default. “An anti-capitalist Argentine government could make it more painful or more taxing for all property owners, including Barrick.”

In short: “We expect that investors will start factoring persistently higher gold prices into Barrick’s future income statements,” Dan says. “As they do, GOLD shares should continue rallying at an impressive pace.”

[Ed. note: Usually we withhold specific recommendations for paying subscribers. But GOLD is one of the biggest and most liquid mining stocks out there. And for maximum gains, you really want to play the options recommendations in Rickards’ Project Prophesy.]

One metal not marching higher — palladium, which sits at $1,412 per ounce today — has been all over the place this year. You might recall the other white metal peaked at $1,610.50 on March 21; its price has been choppy ever since.

Now we read at Bloomberg that the world’s foremost palladium and platinum supplier — Anglo American Platinum Ltd. (Amplats) — “wants to develop a lithium battery that uses platinum-group metals instead of cobalt and nickel.

“The aim is to create a new multibillion-dollar source of demand for the metals as electric vehicles reduce the need for traditional fuel autocatalysts.”

Just in time, too. While electric cars only comprise 2% of overall car sales today, sales of electric vehicles are projected to reach 56 million by 2040, or about 57% of total sales.

To stay relevant to the auto industry, Amplats is partnering with Platinum Group Metals and Lion Battery Technologies “to find a way to use platinum metals to keep batteries cool and create a lighter product with a greater driving range.” A battery prototype is expected in three–five years, Bloomberg reports.

Households in the U.K. have spent about 4 billion pounds on stockpiled goods as they prep for Brexit.

According to a survey conducted by Premium Credit, “One in five Brits has started hoarding food, drinks and medicine, spending around 380 pounds each,” says HuffPost.

And it might be a hard Brexit if the new prime minister has his way: “Boris Johnson has said the U.K. will leave by then, regardless of whether a deal has been agreed with the EU.” 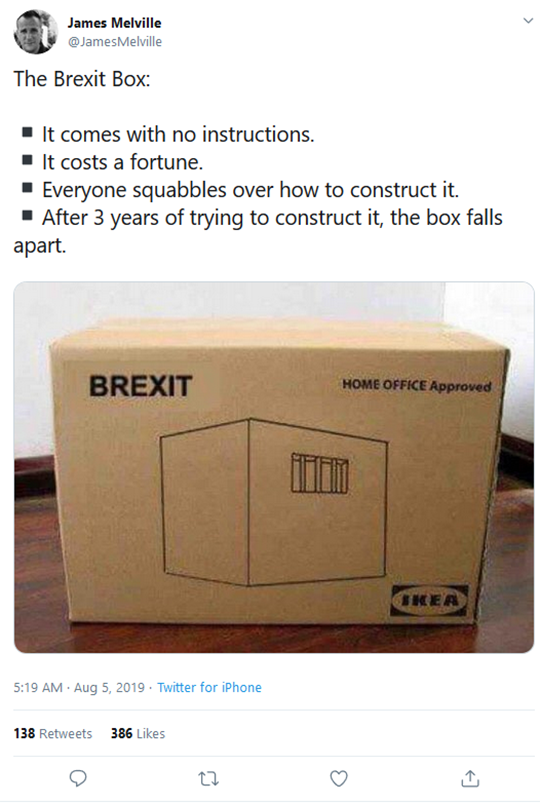 Not the “Brexit Box” we had in mind… but it’ll do.

Hmm… which might indicate Brits are going to have to stop dipping into their Nutella reserves. According to the Premium Credit survey, 75% of participants admitted to already using stockpiled goods. *Sighing melodramatically*

Speaking of which, out of the top 25 most stockpiled grocery items, toilet roll, pasta and squash (not what you think; rather, a juice concentrate) were high on the list.

If Brits do run low on stockpiles, one company that’s ahead of the Brexit curve is pizza chain Domino’s.

The company said yesterday it’s spent 7 million pounds — or $8.5 million — to “implement… a series of measures to minimize the impact of supply chain disruption” because “the probability of this risk has increased.” All to say the company’s loading up on cheese and pepperoni, right?

No word on if Domino’s will be offering a mushy-pea, jarred-hot-dog-topped Brexit special come Halloween. (You heard it here first.)

In response to Dave’s treatment of conspiracy theories yesterday, a longtime reader says: “I have been paying attention with interest during my 58 years here…

“I know that’s a blip in the scheme of things, but I have noticed a few things:

“1. It’s funny how the official narratives for most shock-type events — assassinations, attacks, crashes and so on — that have occurred in my lifetime involve conspiracies.

“2. Those narratives never seem to stand up to the evidence. It’s the strangest thing how they’re always replete with distortions, omissions and lies.

“3. Anyone who has the temerity to disagree with an official conspiracy/narrative is attacked for being a ‘conspiracy theorist’ (or worse). Go figure! Even if you shut up and crawl back under your rock, you’ll be relentlessly mobbed and destroyed.

“So the Establishment orthodoxy can keep trying to distract us with shiny objects and smear the good guys until the cows come home. They can also kiss my @$$.

“Truth just keeps bubbling up to the surface. And accountability is a b*tch.

“Love the grim and cynical humor!”

The 5: Hasn’t it been kinda fun watching Bill Barr trying to spin the Epstein narrative, though?

And show them how to retire a millionaire in under a year.

But you must act before MIDNIGHT.