The Social Security Compromise of 2019

“We should be increasing, not decreasing, Social Security,” says the current front-runner for the Democrats’ presidential nomination.

God help us, it’s now less than six months from the Iowa caucuses and the promises are flying thicker than a swarm of summertime mosquitos.

If you’re wondering what the specifics are, tough luck. “More specific details, such as what a new tax rate would be, are not included in the proposal,” says CNBC.

As it happens, Democrats already have a very specific proposal likely to garner the support of a majority in the U.S. House.

It’s called the Social Security 2100 Act — introduced in both the House and Senate in late January.

Here’s how The New York Times described it back then: “After years of Republican-led debate over how to pare back Social Security’s rising costs, Democrats are flipping the script with an ambitious plan to expand the New Deal-era social insurance program while making gradual changes to keep it solvent for the rest of the century.”

For all the partisan rancor in Washington, we can easily see some sort of a Social Security revamp before year-end — for two reasons…

Maybe in the current political environment, it seems unlikely Donald Trump and Nancy Pelosi could come to terms on anything.

Then again, Trump stood out during the 2016 primaries by saying, “I’m not going to cut Social Security like every other Republican.” Now Pelosi has effectively upped the ante.

The bill’s sponsor is Rep. John Larson (D-Connecticut), who happens to be chairman of the House Subcommittee on Social Security. He’s lined up almost the entire Democratic caucus of the House as co-sponsors.

After Larson held a hearing in March, Forbes reported the following: “On the second of two days of the subcommittee’s initial hearings this year to reform Social Security, Chair Larson repeated his optimism that an overhaul can happen with the same political dynamics that were in place the last time it occurred in 1983: a Republican president, Republican control of the Senate and Democratic control of the House.”

No, not his bill with no changes. That’s not how it works, especially with the GOP in control of the Senate. It’ll be a compromise measure, as it’s been in the past.

The broad outlines of Social Security reform are coming into view, even if The 5 stands nearly alone in taking notice.

For years, Republicans have suggested shoring up Social Security’s finances by once again raising the retirement age — which was one of the major reforms introduced in 1983.

Now Democrats are stepping up with Larson’s bill, which takes a different approach to shoring up Social Security’s finances — raising not the retirement age but instead raising taxes.

Tax increases came with the 1983 reforms as well. Social Security benefits were subject to income tax for the first time. 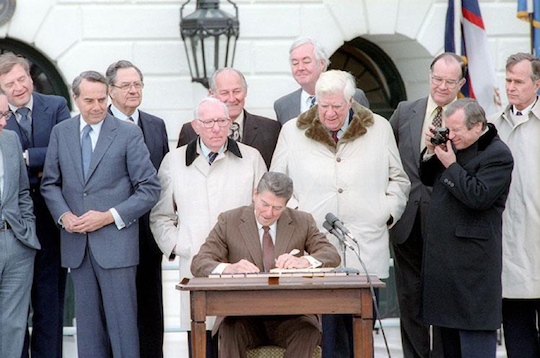 By the time the legislative sausage-making is all done, we’ll probably end up with some combination of both higher taxes and a higher retirement age — as happened in ’83.

Let’s start with what the Democrats propose — because it has two striking features.

That’s a major change from when Obama and Pelosi thought about tinkering with Social Security in 2011. By adopting the “chained CPI” measure of the inflation rate, the annual COLA would have been adjusted downward year after year.

In contrast, the Social Security 2100 Act would adopt a measure of inflation called CPI-E — which would have the effect of raising the annual COLA at a faster clip than it’s rising now.

But the goodies don’t stop there. (You’re already getting suspicious, right?)

Right, you’re saying. So what’s the catch? How does all this get paid for?

Well, the payroll tax rate would rise gradually over the next quarter-century — from 12.4% now to 14.8%.

Seems like a funny thing for Democrats to advocate. The payroll tax has a flat rate that applies equally to about three-quarters of all U.S. households, according to the Tax Policy Center. Indeed, 26.4% of households avoid income tax… but still fork over payroll tax.

The other big revenue raiser is a radical change to the amount of income subject to payroll tax. (This is the “soak the rich” part of the plan.)

Uhh, at least not right away. But if you’re a higher earner, you know that $132,900 cap rises with inflation every year. (Last year it was $128,400.) So the doughnut hole would gradually shrink and ultimately disappear. Devious, no?

This part of the legislation deserves more scrutiny… because it changes Social Security from its original concept of “social insurance” into a straight-up wealth transfer.

As you read the preceding section, two questions probably sprang to mind…

Question: “Wait a minute — you said that $132,900 rises with inflation every year. Doesn’t that mean eventually the ‘doughnut hole’ goes away and all income would be subject to payroll tax?”

Question: “OK, so would those higher payroll tax contributions translate to higher benefits in retirement?”

That’s a sea change from what Social Security’s architects envisioned in the 1930s.

“The Social Security program is intended to be primarily a required-savings program and not primarily an income-redistribution program,” says William Reichenstein, business professor emeritus at Baylor. “In a required-savings program, there is a reasonably close relationship between taxes paid and benefits received, while in an income-redistribution program this relationship is not close.”

Reichenstein has run the numbers on Larson’s bill: Someone with a $500,000 income would pay $6,200 more in taxes every year. But in retirement that translates to only an additional $156 in lifetime benefits.

The Republicans have nothing that specific on the table. But as noted above, their idea of reform generally involves raising “full retirement age.”

On the surface that might make sense — raising the age from the current 67 (for people born in 1960 or later) to 69 or even 70. People are living longer, after all. Well, those who don’t kill themselves or overdose in middle age, but that’s a story for another day…

“But that argument sidesteps the fact that a higher retirement age is a benefit cut,” writes Reuters columnist Mark Miller. “That’s because it raises the bar on how long workers must wait to receive 100% of their benefits. Moreover, gains in longevity are not being distributed evenly across the population, and higher retirement ages would hit some much harder than others.”

No, it wouldn’t affect anyone older than maybe 45 or 50. But the millennials would be guaranteed lower lifetime payments than under the present system.

What’s more, the GOP program takes decades to realize the promised cost savings. Meanwhile, Social Security’s actuaries say the “trust fund” will be depleted by 2035, forcing a benefit cut of at least 20%.

The Democrats’ proposal shores up Social Security sooner, and for the long term. And that’s according to a Republican, Andrew Biggs, who was a top Social Security official under Dubya Bush. “It doesn’t just fix Social Security for 75 years,” he tells the Times. “It would keep the system permanently solvent. That’s a real plus.”

The reality is that Uncle Sam lumps your payroll taxes with your income taxes into one big revenue pot that gets spent right away. Your future Social Security benefits depend entirely on the government’s future revenue take.

But even with that proviso, there’s probably nothing about Social Security that can’t be fixed without some tax increases, benefit cuts or both. Expect it in one form or another… maybe even this year with some compromise measure between the Larson bill and a GOP proposal. We’ll stay on top of what happens in Washington.

Before we go, we should circle back to the 1983 Social Security reforms. Because that’s when, for the first time, Social Security benefits were subjected to the income tax.

Here’s the really crazy thing: The income threshold where taxes kick in has never been adjusted for inflation.

Then and now, you pay tax on “provisional income” above $32,000. (The figure is calculated by adding up your gross income, tax-free interest and 50% of Social Security benefits.)

Here’s something even crazier: Did you know many Americans aren’t paying taxes on Social Security?

With just one move, you can do the same.

All the critical information is collected in a brand-new FREE book. Follow this link to learn how you can claim your copy and potentially boost your Social Security checks.

P.S. One more thing — did you know Americans have left billions of dollars in unclaimed Social Security benefits on the table?

Don’t be one of them. Follow a simple strategy and you could add tens or even hundreds of thousands of dollars to your lifetime Social Security benefits. We know of a couple from Nebraska who acted in the nick of and wound up with the potential for an extra $231,629.

The details are in the same book we mentioned a few moments ago. Learn how to claim your free copy at this link.