“Interest rates, adjusted for inflation, remain historically low,” says Politico. “It is on the corporate investment side — where the 2017 tax cut was supposed to unleash a wave of growth — where conditions have stalled,” Politico says.

“Company investments in long-term projects like factories and technology picked up during the first half of 2018 in the wake of corporate tax cuts, but those investments have faded much faster than expected.”

Something The 5 anticipated almost from the moment Trump signed the TCJA… and something we mentioned most recently Monday regarding corporate buybacks and the market’s inorganic growth as a result.

With the stock market chockablock with bloated companies — not to mention Trump fomenting more trade war aggression yesterday — what’s an investor to do?

Pull cash from the stock market to stash in an “interest-bearing” savings or money market account? Hardly.

Savers have been punished relentlessly since 2008 with low rates… and it’s about to get even worse, courtesy of the Fed rate cut this week.

So today we turn to our income expert Zach Scheidt for advice. What he has to say ain’t necessarily sexy, but if (when?) the stock market turns south, Zach’s advice could put you at the front of the line to get paid. Guaranteed. 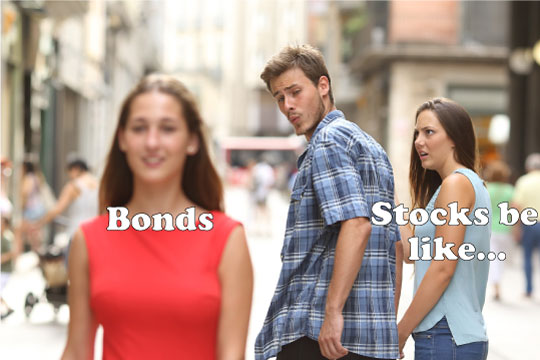 So we’re talking bonds today. And not just any bonds — corporate bonds. “A corporate bond is nothing more than a way for companies to borrow money from the public,” Zach says.

The script’s flipped — investors lend cash and get paid back with interest. Sounds simple enough, right?

Zach says: “First… let me explain how these bonds work.” To that end, Zach provides a lexicon…

“[The company] decides how long it wants to borrow the money for — an exact date known as the bond’s maturity,” Zach continues. “The company pledges to pay the bondholder $1,000 on that date, if not before.”

But you wouldn’t just lend a company a thousand bucks for them to simply return the same amount, right? “The company also decides how much interest it’s willing to pay on that loan,” Zach says. “It’s a fixed percentage based on the $1,000 par value, known as the yield.

“The company pays that interest every six months over the life of a loan, known as a coupon payment.”

Keep in mind, established companies with long track records don’t need to offer high-interest payouts. Investors are attracted to these bonds because of the company’s solid reputation.

On the other hand, new companies — or companies the proverbial vultures are circling — have to offer higher interest rates, making it worth investors’ while to make a risky bet.

“And this is where things get interesting,” Zach says. Who knew the bond market could be so juicy?

“Bonds are initially valued at $1,000. But once the company sells the bond, the buyer is free to sell his or her bond to another investor.

“Many bonds were created during the last financial crisis,” Zach says, “when investors were wary of long-term investments.” Resulting in companies offering high-interest coupons to entice buyers…

“Then the economy got stronger — and so did the companies that issued these high-yield bonds,” says Zach. “What seemed like a risk back then now looks more like a sure thing.”

Since then, it’s been a case of out of sight, out of mind: “Investors have forgotten these bonds exist, so you can buy them at or even below par value.

“That means you can lock in a great yield for a low price.”

[Ed. note: If you follow Zach’s recommendation, you won’t have to worry about wild market swings again while earning much more money than you’re likely to see in stocks alone.

Truth is, stocks don’t always go up in a straight line…

So to mitigate damage from volatility, consider padding your portfolio with investments outside of regular stock trades.

“Unfortunately,” Zach says, “many investors think corporate bonds are too complicated to bother with… so they essentially pass up an easy way to earn extra cash.”

Don’t be that investor…

Instead, let Zach do the homework and heavy lifting for you at Contract Income Alert.

And don’t wait to get started — access closes MONDAY at MIDNIGHT.]

To the markets… still reeling from the latest shot fired in the U.S.-China trade war.

As we mentioned just before hitting the “Send” button yesterday, Donald Trump wants to lay a 10% tariff on the $300 billion of imports from China that aren’t already subject to tariffs. The reaction was swift and severe and it’s continuing today.

The safety trade is in full swing. Barring a late-day sell-off, gold will end the week around $1,445 – the highest in more than six years. And at 1.86%, the yield on a 10-year Treasury note is the lowest since just before Election Day 2016.

The trade war jitters make the monthly job numbers almost an afterthought this morning, but they’re still worth a mention…

The wonks at the Bureau of Labor Statistics conjured 164,000 new jobs for July – not great, not terrible and a bit better than expected.

Unfortunately, a lot of those new jobs are in government and not the private sector. That was also the case last month. Another discouraging sign: The average workweek fell unexpectedly from 34.4 hours to 34.3. And in manufacturing, the drop was bigger, from 40.7 hours to 40.4.

The official unemployment rate held steady at 3.7%. But this is also worrisome in light of research we spotlighted last year: A recession typically sets in only four months after the unemployment rate hits bottom. At least that’s the average of the 10 recessions since 1950. We bottomed at 3.6% in May.

On the “bright side,” the real-world unemployment rate from Shadow Government Statistics is 21.0% — the lowest in nearly 10 years.

There’s nothing in these numbers to give the Federal Reserve any cues about whether to do a follow-up cut to the fed funds rate in September. But if the stock market keeps tumbling at this pace, that cut is guaranteed. Only yesterday, futures traders assigned a 61% probability of a rate cut at the next Fed meeting on Sept. 18. This morning that probability is 98%.

A trade war’s brewing on the other side of the world: “Japan will remove South Korea from its list of trusted trade partners,” the BBC reports.

Overshadowed by Trump’s trade war antics, the deepening divide between the two Asian countries has been largely ignored by the MSM.

Japan has retaliated by scratching South Korea off its whitelist of trade partners and imposing tight restrictions on certain tech supplies for electronics manufacturing.

"Though Japan is an economic powerhouse,” he said, “if it were to damage our economy, we likewise have countermeasures to implement in kind.”

And the situation’s getting crazy, y’all… 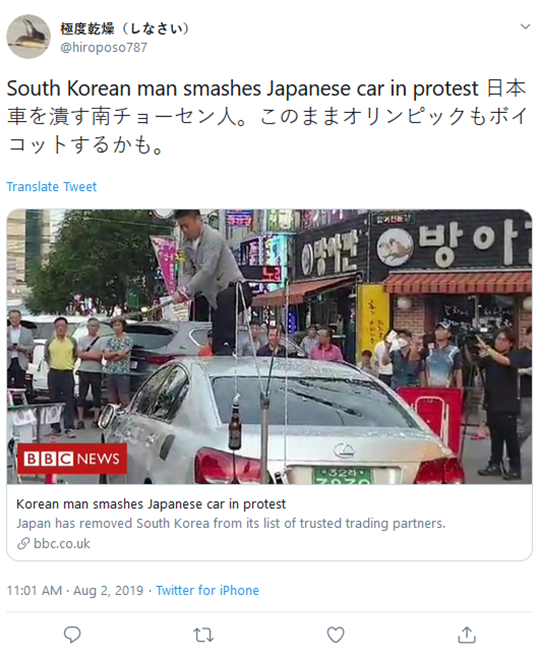 And this is grim: “A South Korean man set himself on fire yesterday in the center of Seoul.

“Supermarket shelves are being emptied of Japanese goods. Defiant demonstrators post films of themselves destroying their own Japanese cars.”

The BBC warns: “This is just the start.”

Last week, Dave talked about the Fortnite phenomenon; this week we learn a new World Fortnite Champion has been crowned — 16-year-old Kyle “Bugha” Giersdorf won it all.

His prize? A big-ass trophy for collecting dust… along with a $3 million purse. To put that in perspective, Fortnite cash winnings eclipse prizes for the Masters and Wimbledon.

Even so, “the gaming industry is still a largely untapped space,” Alan says. “And now’s your opportunity to cash in on major gaming profits… BEFORE the big boom!”

One of Alan’s favorite plays to take advantage of the gaming craze is Activision Blizzard Inc. (ATVI); the company’s responsible for uber-popular games like Call of Duty and World of Warcraft.

“The stock climbed to a high of $84.50 last October,” says Alan, “and investors were looking forward to the upcoming innovations Activision had in store.

“But since then, the company hit a rough patch… and is now trading for nearly HALF its value.”

The silver lining? “The company is actually making a major shift in its business… moving from traditional computer and console gaming (Xbox, PlayStation) to the lucrative mobile market.”

And mobile gaming is edging out console and PC gaming, taking a 51% share of the market and expected to grow to a $106 billion industry in the near term.

“So Activision is positioned to profit in the new world order of gaming,” Alan says. “Best of all, the stock is still incredibly cheap after December’s sell-off.

“But the stock won’t stay this cheap for long.”

[Update: Britain’s beloved “Chocmobile” is still at large] In more dessert news… just in time for the weekend — enjoy an all-American treat! (Enjoy and treat — might be used loosely.) 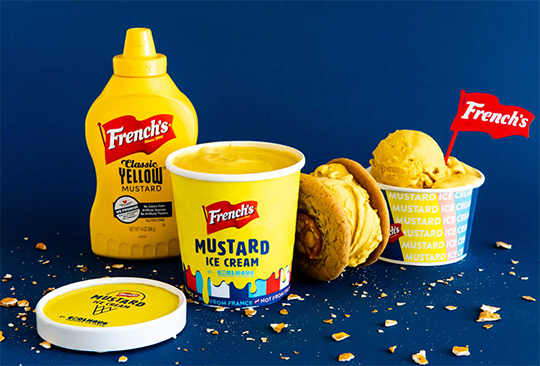 “The release is… part of French’s ‘Not From France’ campaign, which celebrates American flavor through ‘unexpected twists on beloved classics.’” You can say that again.

Or… you could say this frozen concoction simultaneously ruins two foods?

But if you don’t happen to live in NYC or Los Angeles — where the ice cream will be served with a pretzel cookie on the side — you’ll never know.

I, for one, can live with that.

But dividends have their drawbacks — they can be cut or even eliminated.

Not so with corporate bonds: The company’s legally obligated to pay you back…

And until it does, it’s required to send you interest checks every six months.

The biggest advantage? In a worst-case scenario, if the stock market tanks…