“I advise a lot of students in a lot of majors and they’re all like, this is going to be cool,” says Antonio DiTommaso, program director for agricultural sciences at Cornell.

Mr. DiTommaso believes — and he’s probably not wrong — the marijuana industry has the cool factor; so much so, undergrads will be lining up to enroll in the Ivy League institution’s latest course offering this fall: Cannabis: Biology, Society and Industry.

“I think some of it is just a novelty,” he tells The Wall Street Journal, “but it’s really going to be based on the cropping, the agronomics, the medicinal aspect, the chemistry, consumer attitudes and policy.”

And if you’re looking for a quality state school alternative, the University of Maryland now offers a master’s degree in medical cannabis through its School of Pharmacy.

An even more affordable option? Northern Michigan University in the state’s Upper Peninsula (or Dave’s neck of the sometimes-frigid woods) was the first to offer a bachelor’s degree in Medicinal Plant Chemistry back in 2017. 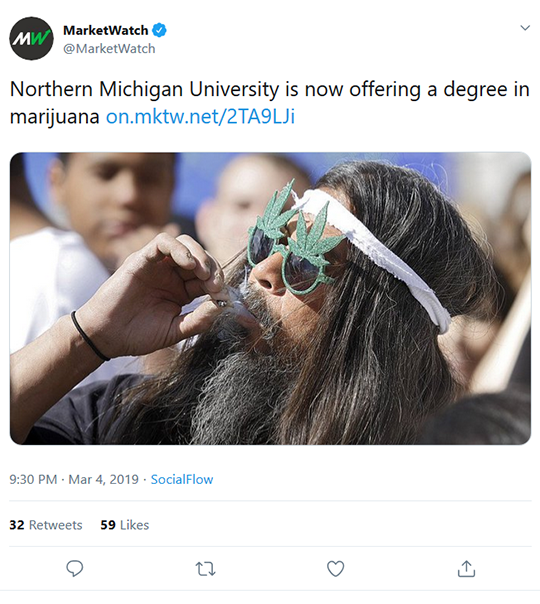 [Side note: To satisfy our own curiosity, we checked out the cost per credit hour of the institutions above. A credit hour at Cornell will run $1,460 this fall. The home of the Terrapins? Residents will shell out $731 per grad credit. Last, for Yoopers, $437 per credit hour. OK… itch scratched.]

Even though the U.S. is steadily embracing the marijuana industry (see above), the pot stock index has been all over the place recently…

“The correction in cannabis stocks this year has been frustrating,” pot stock expert Ray Blanco concedes. “But in the context of the longer-term trend, it’s a blip on the radar.”

Before we get to that, however, Ray pulls no punches. “Pot stocks continue to endure volatile — and downright frustrating — trading this summer,” he says. “By some estimates, the average cannabis stock has lost about a third of its value since March.”

But adds tiny marijuana companies were flickering Buy about a month ago — and that for the first time since late 2017. 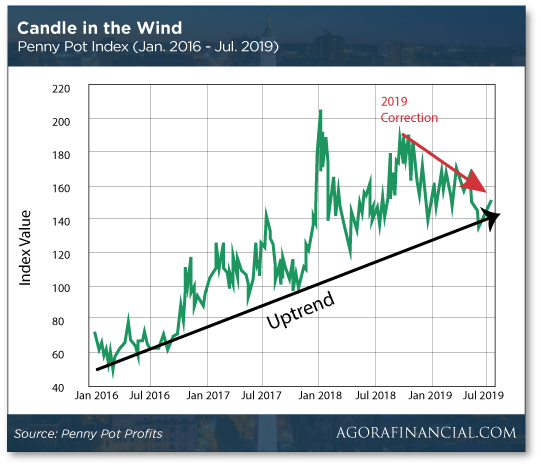 “At a glance,” says Ray, “you can see the 2019 correction that most cannabis investors are fixated on… and the much more powerful long-term uptrend that’s been propelling the Penny Pot Index higher for more than three years now without fail.

“In June, our Penny Pot Index touched that uptrend line for the first time since the fall of 2017, and it’s been quietly moving higher since then,” Ray says.

Because Ray’s culled through the data, he believes the marijuana index’s correction will knock off in the near term. 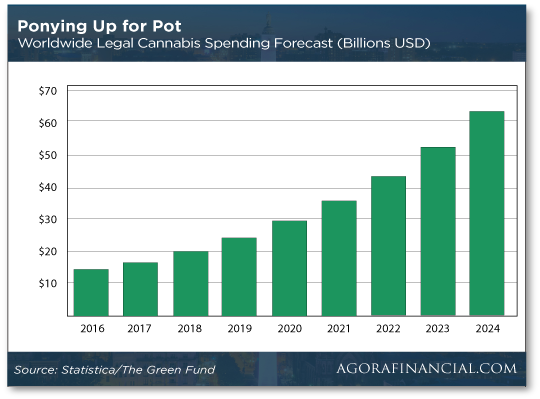 “Legal cannabis spending has been carrying out a parabolic surge higher since 2016 — and several independent sources estimate that it’ll eclipse $60 billion by 2024,” Ray says.

So… why the correction?

Ray says: “I’ve never shied away from saying that there will be winners and there will be losers in the cannabis business. There’s a world of difference between the innovators in the legal cannabis market and the also-rans trying to ride the hype of publicly traded pot.”

Still, it’s not always easy to sort the weed from the chaff (it wrote itself, folks).

Ray chalks up the pot market’s correction, in part, to investors’ frustration across the board, saying, “They’d rather just discount everything.

Because Ray’s done the hard-hitting research — including onsite visits to cannabis companies in Canada, Nevada, Colombia and beyond — his portfolio is stacked with the best-run, most innovative companies in the legal cannabis space.

And he continues to snap up the upstarts in the pot market… while they’re still bargains.

“Now with cannabis stocks turning higher this summer, I think [investments] are set to pay off in the second half of 2019,” Ray says.

Ready to seize the opportunity? Make sure to move on this before TOMORROW, July 31.

Then? Get ready for big wins ahead by clicking here.

One of the year’s IPO darlings, Beyond Meat, took the money and ran…

According to Bloomberg: company execs plan on “dumping about 5% of the company’s outstanding shares on the market at once.” On the news, BYND shares slipped about 11% this morning.

“One positive coming out of this debacle,” notes Agora analyst Greg Guenthner, “is that management is showing its true colors early in the game.

“Beyond went public less than three months ago and enjoyed a meteoric rise,” says Greg. “The company just quadrupled its revenues, yet feels the need to dilute its stock.

With tongue firmly in cheek, Greg says: “Congrats to Beyond Meat on the cash grab — and say a quick prayer for any speculators who grabbed shares ahead of last night’s earnings announcement.”

Capital One joins the ever-expanding ranks of hacked companies; the financial company announced yesterday the personal information of 100 million U.S. and 6 million Canadian customers had been compromised. Not good “optics,” as the marketing bros say.

But hey, does this make you feel any better?

This per a COF notice… eh, no biggie, right? Other than 220,000 affected customers. (To whom, apparently, Capital One says “sucks to be you.”)

COF is down 7.2% at the time of writing. Meanwhile, Amazon is down less than 1%. Why do we bring up Amazon? Because Capital One was using AWS, Amazon’s cloud-computing platform (also Amazon’s profit center). And the person charged by the feds in this case used to work for AWS.

Think people will finally wake up to the fact “the cloud” is no more secure than anything else?

Plus, the data breach doesn’t bode well for that $10 billion Pentagon contract — known as JEDI (we kid you not) — that AWS is competing for.

So the Fed’s preferred inflation gauge, core PCE, comes out as the Fed convenes its two-day meeting.

The Fed hit its 2% core PCE target briefly last summer and fall, but since then it’s fallen and can’t get up… 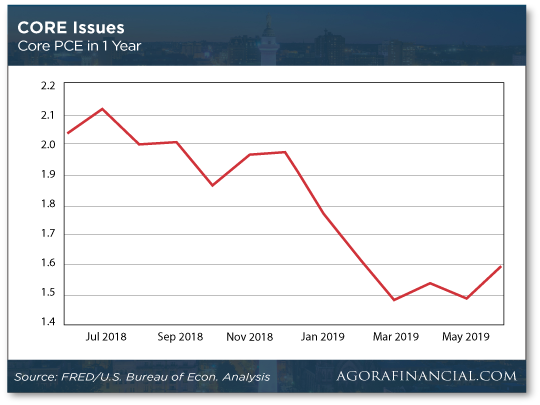 Overall, not enough to move the needle to a half percentage point rate cut tomorrow; the trade in fed funds futures this morning is pricing in a 100% probability of a cut but only 23% probability of a big cut.

“In other words, currencies like the Japanese yen, the euro and other developed world currencies strengthen. And that’s great news for U.S. businesses that sell their products in international markets.”

When consumers in foreign markets have strong currencies, it makes American goods and services more affordable. And Zach says: “Ultimately, profits generated in overseas markets are brought back home.”

And U.S. investors win as American stocks are buoyed by international profits. “So while a weak dollar may sound like a bad thing,” Zach says, “it actually sets the stage for bigger profits for American companies — and for American investors.”

Microsoft — once tech’s new kid on the block — is investing big in trendy technology.

Our former venture capitalist James Altucher reports: A little over a week ago, “Microsoft announced that it was making an impressive $1 billion investment in a nonprofit to bolster Microsoft’s Azure cloud capabilities.”

The nonprofit, OpenAI, “is a research lab dedicated to creating artificial general intelligence (AGI) ― a type of AI that has human-level intelligence.” (In case you were wondering, Tesla’s CEO Elon Musk played a part as co-founder of OpenAI. What doesn’t this guy have a hand in?)

“The move will give Microsoft increasing sophistication in the tools it can offer its customers,” says James, “allowing its cloud offering to compete more effectively with Google and Amazon as the race for AI heats up.”

Just because AI’s trendy doesn’t mean it doesn’t have enormous profit potential. “With more and more capital flooding into this space,” says James, “we’ll likely see mind-boggling advancements to tech in our future.”

A lucky retiree struck it rich when he unearthed a massive gold nugget near Victoria, Australia.

The anonymous hobby prospector was using a metal detector when he hit on a .22-caliber bullet. And he was about to call it a day… but then decided to dig a little deeper in the same spot.

About a meter down — or about 3.3 feet for those not down with the metric system (I resemble that remark) — the retiree uncovered a gold nugget weighing almost 5 pounds. 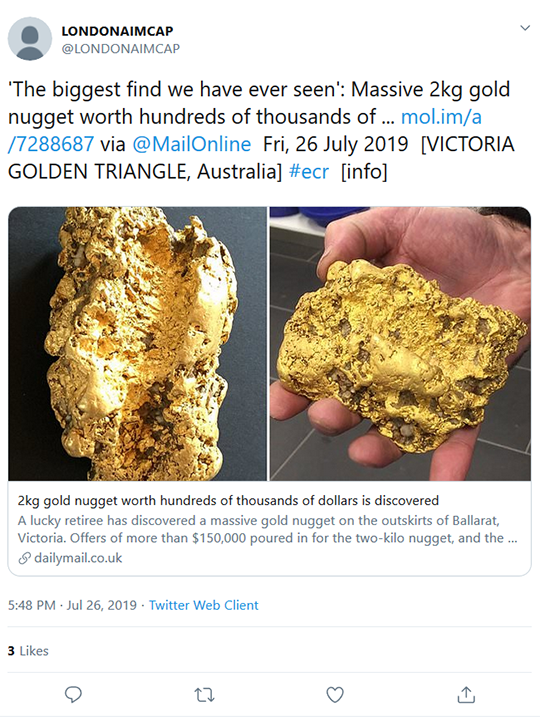 Mark Day, of Gold Ballarat — a prospecting gear supplier — says: “I’ve been in this business for 25 years and this is the biggest find we have seen by one of our customers — that they’ve told me about anyway.”

Mr. Day says the man who found the gold rock was “shaking like a leaf” when he showed off the nugget; the retiree’s since been offered $160,000 for his fortunate find.

No word on whether he’s accepted the offer.

One thing’s clear — our lucky retiree’s upgraded his metal detector and is heading back to the bush.

If you’ve followed Agora’s work for any time now…

Then you need to see this new presentation.

It might change how you look at our company forever.