As we write, Special Counsel Robert Mueller is testifying on Capitol Hill. Democrats are trying their level best to bait him into saying something damning about the president and the bogus “Russian collusion” allegations that he hasn’t already — praying they can bolster the case for impeachment. So far, he won’t bite. 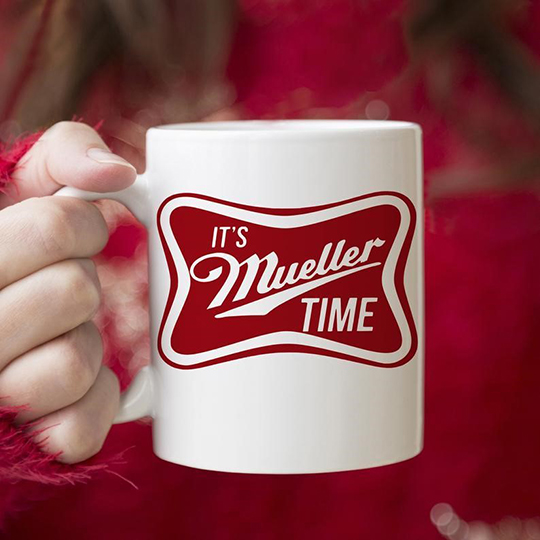 Still, impeachment isn’t going away. The House goes on summer break in a couple more days, and then members will get down to business after Labor Day.

No, the Senate won’t convict even if the House passes articles of impeachment. But impeachment will suck up most of the oxygen of the news cycle and that proverbial cloud of uncertainty will hang over markets.

In the meanwhile, we turn our gaze away from today’s spectacle and toward another angle of “Russiagate” — one that’s leading conservatives down the primrose path.

In May, Attorney General William Barr ordered an investigation into the origins of Russiagate: Did the U.S. “intelligence community” aim to undermine Donald Trump’s candidacy in 2016, and did it break the law doing so?

On the surface, it seems as if Barr is serious about pursuing this case. He appointed a special prosecutor and he said the investigation would encompass intelligence agencies beyond the FBI — which presumably means the CIA in general and Obama’s CIA chief John Brennan in particular.

Conservatives have high hopes. Those hopes were raised even higher when Barr asserted that “spying” occurred against the Trump campaign.

In the same way liberals looked to Mueller as a savior figure who would deliver us from Trump, conservatives look to Barr as the guy who will take down the deep state once and for all.

“Spygate,” as some people call it, is going nowhere. Barr and his handpicked prosecutor will make sure of it. The fix is in.

Barr has a peerless record of enabling the deep state: He helped cover up both Iran-Contra and Ruby Ridge.

This isn’t Barr’s first rodeo as attorney general. He also served in the post under Poppy Bush during the early ’90s.

It was at Barr’s urging that on Christmas Eve 1992, Bush pardoned six figures from the Iran-Contra scandal. If your memory’s getting hazy, Iran-Contra was the madcap scheme in which the Reagan administration sold arms to the mullahs in Iran (despite an arms embargo) and used the proceeds to fund right-wing rebels in Nicaragua (despite a law Reagan signed prohibiting such aid)

Bush himself was up to his neck in Iran-Contra; the heat was on because former Defense Secretary Caspar Weinberger was set to go on trial in January 1993.

But the pardons decisively thwarted a special prosecutor’s investigation. “Bush’s pardons greatly reduced the likelihood that his co-conspirators would ever turn state’s evidence against him,” recalls the journalist James Bovard in USA Today.

It was also on Barr’s watch that federal lawmen effectively got a blank check for killing U.S. citizens. This was the Ruby Ridge fiasco.

Ruby Ridge was the mountaintop in Idaho where a white separatist named Randy Weaver lived with his family. During a 1992 sting operation, undercover feds entrapped Weaver into selling them a sawed-off shotgun.

The feds then conducted a raid during which they killed Weaver’s 14-year-old son, Sammy. The following day, an FBI sniper named Lon Horiuchi killed Weaver’s wife, Vicki, as she stood in the doorway of their cabin, holding her baby. Weaver himself was shot in the back but survived.

“The suspects were never given a warning or a chance to surrender and had taken no action against FBI agents,” writes Bovard, this time in The American Conservative.

Barr denied direct involvement in the operation, but in 1995 The Washington Post uncovered records revealing Barr was on two conference calls about Ruby Ridge in the 24 hours before Vicki Weaver was killed.

What’s more, when local prosecutors in Idaho filed manslaughter charges against the sniper Horiuchi, Barr urged the court to dismiss the charges. He said pursuing the case would “severely undermine, if not cripple, the ability of future attorneys general to rely on such specialized units in moments of crisis such as hostage taking and terrorist acts.”

As for the special prosecutor appointed by Barr to pursue “Spygate,” well, he has his own history of covering up federal wrongdoing.

His name is John Durham. Most of the press accounts of his career are about taking down mobsters in Boston during the early 2000s. But that overlooks a crucial, more recent episode.

Durham was the point person to cover up CIA torture and murder during the early years of the “war on terror.”

In 2008, Bush 43’s attorney general Michael Mukasey appointed Durham to look into the destruction of videotapes revealing acts of CIA torture. In 2009, Obama’s attorney general Eric Holder expanded that inquiry, tasking Durham with looking into the deaths of prisoners held by the CIA in Iraq and Afghanistan.

Despite an abundance of evidence pointing to extreme illegality, Durham came up with bupkis that Holder could take to court. The only person prosecuted in connection with CIA torture from that era was John Kiriakou — a whistleblower who revealed the identities of torturers to reporters.

So let’s get real: Given Barr and Durham’s history, how likely is it that John Brennan or James Comey will be frog-marched into federal court for spying on the Trump campaign?

But hope springs eternal. Here’s Rep. Peter King (R-New York), during a radio interview recently: “There is no doubt to me there were severe, serious abuses that were carried out in the FBI and, I believe, top levels of the CIA against the president of the United States or, at that time, presidential candidate Donald Trump.”

There almost certainly were. Just don’t expect “the new sheriff” and his deputy to ever bring them to light.

Aside from events in D.C. today, there’s no shortage of market-moving headlines.

At last check the Dow is down 135 points to 27,213. Two of the 30 Dow Jones industrial stocks that are actually “industrial” in nature delivered stinker earnings reports — Caterpillar and Boeing.

Not only were Boeing’s losses wider than expected, but the company says it might suspend production of new 737 Max jets if the existing ones can’t be returned to service soon. BA shares are down more than 2.5% as we write.

The S&P 500 is flat on the day while the Nasdaq is up slightly despite word the Justice Department is expanding its antitrust investigation into the giant tech companies. One of those companies, Facebook, is down more than half a percent after the Federal Trade Commission announced a $5 billion fine for mishandling its users’ personal information.

Another day, another disappointing housing number.

The Commerce Department says new home sales rebounded sharply in June. But the number was still lower than expected, and the previous three months were revised down. Sales are up 4.5% year over year, but prices are flat.

Yesterday the disappointment came with existing home sales — down 2.2% year over year and the 16th straight month of annual declines. The housing market has definitely topped out in the priciest West Coast locales.

And all this at a time of low unemployment, rising wages and falling interest rates. Lawrence Yun, chief economist for the National Association of Realtors, pronounces himself befuddled: “It doesn’t make economic sense.”

Sure it does: According to Mr. Yun’s own organization, the median listing price of a home in these United States is $316,000. Meanwhile, the Census Bureau says median household income is $61,372.

That’s a price-income ratio of 5.1-to-1 — exactly what it was during the peak of the housing bubble in 2006, and nowhere near the 2x or 3x ratio personal finance experts would tell you is prudent.

No, we’re not saying housing is due for an outright crash. But sometimes it really is all about the price and not just the monthly payment!

“The worst budget agreement in our nation’s history,” is how the Committee for a Responsible Federal Budget describes the spend-a-palooza concocted by the White House and Congress on Monday. (OK, they hedged it with “may end up being the worst.” Close enough.)

Before the House skips town this week, it will likely pass the bipartisan deal. Yes, it suspends the debt ceiling and forestalls a potential default on the national debt for two years, past the 2020 election.

But oh, at what a price. “Prior to the agreement,” writes Craig Eyermann from the Independent Institute, “the White House Office of Management and Budget projected the U.S. government would spend $9.691 trillion in its upcoming 2020 and 2021 fiscal years, of which, $2.169 trillion would need to be borrowed.

“With the bipartisan spending agreement, however, both numbers will be $320 billion higher than without it, with the government set to spend over $5 trillion a year during the next two years.”

As our Jim Rickards writes in his new book Aftermath — released just yesterday — the national debt is now larger than U.S. annual GDP — about 105%. Projections were the figure would reach 115% by 2023. Now we’ll need to move that up a year or two. Result: America will look more and more like Japan over the last 30 years, Jim writes — “a prolonged period of slow economic growth punctuated by occasional technical recessions.”

[Bonus points: The deal this week does not preclude the possibility of a “partial government shutdown” this fall. Congress still has to pass a dozen budget bills by Sept. 30.]

To the mailbag, and more follow-up on the tax-enforcement death of Eric Garner five years ago.

“Well of course the idiot didn’t deserve to die for selling ‘loosies,’” the reader writes, “but…

“How about exercising a little freaking common sense?

“How often do you read a story where some moron decides to fight the cops and wins?”

A few days after the 2015 riots in Baltimore — an event my wife and I experienced way too close for comfort — I cited a passage by Patricia Fernández-Kelly in a book about west Baltimore: “Growing up poor in the richest nation in the world involves daily interactions with agents of the state, an experience that differs significantly from that of the more affluent populations.” [Emphasis ours.]

The rules laying out when a police stop is and is not acceptable? They’re different in “high-crime areas.” Time and again the courts, including the U.S. Supreme Court, have said the Fourth Amendment’s prohibition against unreasonable searches and seizures basically doesn’t apply.

This week, data obtained through a Freedom of Information filing revealed that Chicago police executed more than 11,000 search warrants between 2012–17 — most of them on the South and West sides, which are poor, minority or both. In nearly half of those instances, the warrant didn’t even result in an arrest.

So there’s some added context for Garner’s nearly final words to the NYPD: “Every time you see me, you want to mess with me! I’m tired of it! It stops today!”

Which, as it turns out, it did.

P.S. As we go to virtual press, nothing about our initial characterization of the Mueller hearing has changed. 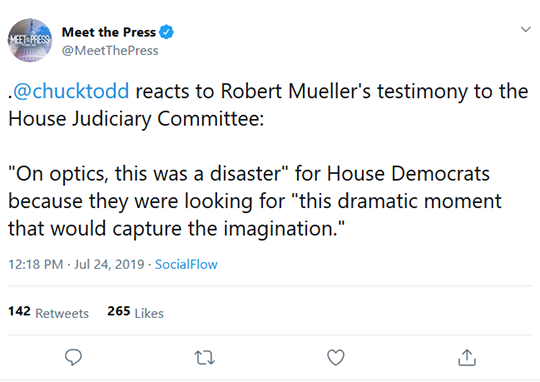 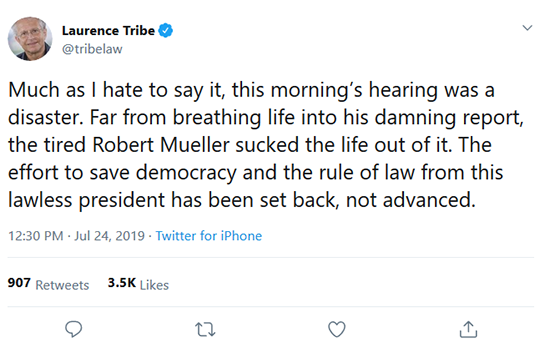 Yeah, but you can get a sweet deal on some Mueller keychains now!