“Noron” Earns Her Big Reward. What About You? 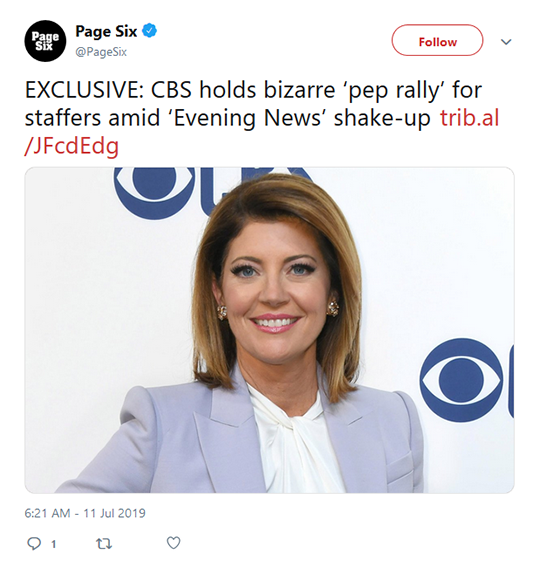 Norah O’Donnell debuts next Monday as anchor of the CBS Evening News. The chair occupied by Walter Cronkite back in the day has been career suicide more recently — held by no fewer than five people in the last 14 years.

But hope springs eternal, and so according to the Page Six gossip site, the network held a “pep rally” yesterday — an event that left some staffers “embarrassed” and “confused.”

Supposedly O’Donnell and CBS News brass “starred in a taped ‘music video’ set to a DJ Khaled song — complete with a dance routine.”

Ouch. Sounds as awkward as the time CBS tried pairing Dan Rather and Connie Chung. 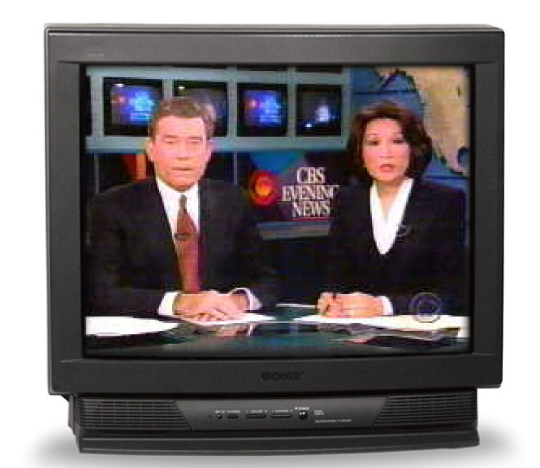 Maybe they should have spiced it up with a dance routine…

But it’s still a prestigious gig, even in an age of shrinking TV viewership: It’s O’Donnell’s reward for many years of service as a reliable handmaid to the power elite.

O’Donnell first came to prominence more than a decade ago as Chris Matthews’ regular substitute on MSNBC’s Hardball. The questions she asked of guests were so frequently fatuous that many wags in the blogosphere took to calling her “Noron.”

One night in 2006, as many Americans were fed up with the carnage in Iraq, she interviewed Sen. John McCain about growing demands to withdraw U.S. troops. By one account, she described those proposals as “cut and run” at least 15 times — parroting President Bush’s rhetoric word for word.

In 2009, she was just as quick to rise to the defense of a Democrat in the White House. There was an uproar about some creepy video footage of schoolkids in New Jersey singing a song praising Obama. (Sample lyric: “He said we must be fair today! Equal work means equal pay! Barack Hussein Obama!”)

In a tortured discussion with Tim Carney of the Washington Examiner, O’Donnell tried to rationalize the exercise like so: “They’re singing a song… I remember certainly in elementary school when Ronald Reagan was president and we sent him jelly beans… And I don’t think everybody in the class ended up a Republican because of that.” 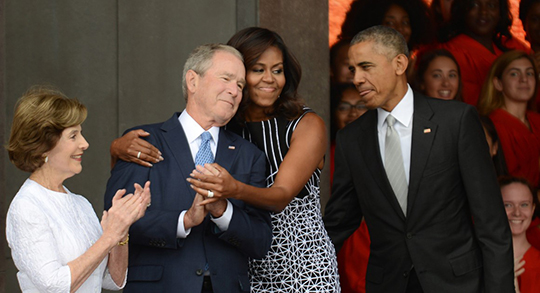 O’Donnell’s rewards aren’t only in the form of prestige: There’s the pecuniary side of it too.

At the peak of his 19-year reign at the CBS Evening News, Walter Cronkite earned less than $1 million a year — a “very satisfactory salary,” he recalled.

Assuming that peak came toward the end of his tenure in 1981, that works out to something less than $3 million in today’s dollars.

O’Donnell will pull down a reported $7–8 million — to reach an audience a fraction the size of Uncle Walter’s.

Meanwhile, hundreds of people work as producers for local newscasts around the country these days for about $30,000 a year. Adjusting for inflation, I commanded a higher salary a mere seven months into my career, performing the same duties.

This yawning pay gap between the elites and the worker bees is just one more way I’ve seen journalism go to hell over the last 30 years.

But for those like O’Donnell who’ve pandered to power all the way to the top, the money is sweet — and it’s juiced by access to financial trades unavailable to everyday Americans. Until now.

I want to share an example similar to the one I did on Tuesday — another eye-popping trade our researchers uncovered as part of our “Freedom Underground” project.

This one’s only four months old. At the time, AMD — one of the leaders in computer graphics cards — was reeling from a narrative in establishment financial media: AMD’s market share was falling hopelessly behind its rival Nvidia. Shares dipped as low as $21 each.

But days later came word that AMD had struck a partnership with Google on a new video game streaming service. So much for the narrative: In a matter of days, AMD shot up from $23 a share… to $28. That’s a lightning-quick 22% jump. 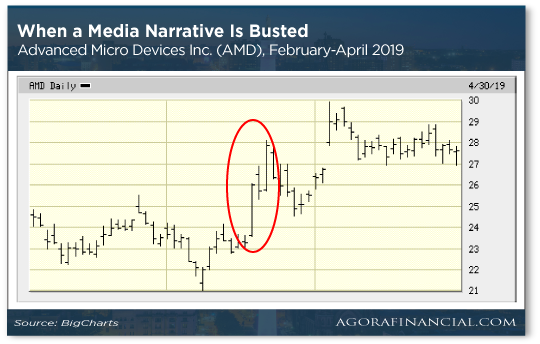 Using leverage, however, market and media insiders parlayed that 22% jump into staggering riches — a mere $500 stake becoming $47,250 darn near overnight.

Meanwhile, retail investors who were merely chasing headlines and bought AMD shares after the Google announcement saw their holdings go nowhere for two months before they moved any higher.

If you can look past the media narrative on a stock… and detect market activity that belies the narrative… you can make your move before big announcements like the AMD-Google partnership. Suddenly, lucrative gains long reserved for the power elite could be yours.

That’s the beauty of a proprietary indicator our team has refined after many months of painstaking work. It’s capable of detecting those moves in advance — and with 97.1% accuracy, no less. Given my media background, I’ve been eager to bring this indicator to you — and help you even the score with the power elite in general and elite media in particular.

As you’re probably aware (thanks to the volume of emails we sent you!), I took the wraps off this system yesterday. If you missed the announcement for any reason, you can get up to speed right away at this link.

To the markets… where the near-certainty of an interest rate cut at the end of the month is powering the major indexes to round-number records.

The rally started yesterday when Federal Reserve Chairman Jerome Powell spoke to Congress — all but saying a cut in the fed funds rate will come at the next Fed meeting July 31.

The big economic number of the day certainly won’t dissuade the Fed from cutting rates: Inflation as measured by the consumer price index is now running 1.6% year over year — down from 2% on the nose just two months earlier. (In the real world, inflation’s running 9.4% according to Shadow Government Statistics, but here too the number is in a downtrend.)

Oil lingers above $60 a barrel… as the headlines about oil tankers obscure a deeper reality.

The news today is that five Iranian vessels supposedly tried and failed to intercept a British tanker in the narrow Strait of Hormuz.

That comes a week after the Brits seized an Iranian tanker off Gibraltar, supposedly on the grounds that it was breaching European Union sanctions by hauling oil to Syria — a flimsy pretext no one believes but U.S. media play along with. Spain’s foreign minister, among others, says Britain did it on Washington’s request to enforce U.S. sanctions on Iran. And since when does London care about enforcing EU sanctions, anyway?

Here’s the problem: Donald Trump wants two things from his Iran policy, and he can’t have them both at the same time.

At that moment, “the contradictions in his Iran policy were laid bare,” writes Thomas Wright in The Atlantic.

“Trump wanted to shred the Iran nuclear deal and impose maximum pressure on the Iranian regime. He also wanted to avoid embroiling America in a new conflict in the Middle East. He could not have both.

“But for more than a year, he pretended as if these two goals were not in conflict. Perhaps he believed the Iranians would surrender without a fight. Or that they would come to the negotiating table from a position of weakness. Or perhaps he did not think about the endgame at all until he had to.”

Whatever the case, Trump has a choice: If he gives the boot to National Security Adviser and perpetual Iran warmonger John Bolton, that choice will become clear.

Wright’s Atlantic story posits the possibility Bolton would be replaced by retired Army Col. Douglas Macgregor — a regular Tucker Carlson guest, including on the night Trump called off the air strikes.

“His appointment,” according to Wright, “would be treated as a calamity by the Republican foreign-policy establishment — which is one reason it may appeal to the president.”

As we said three weeks ago, there’s no appetite in Trump Nation for a new Middle East war. Or the vastly higher oil prices that would come with it as the election cycle kicks into high gear…

“Please don’t assist the liberal elites with their revisionist history and deliberate misinformation,” a reader implores after our brief history of supply-side tax cuts Tuesday.

“The tax cuts under the Reagan administration did, in fact, result in increased revenues to the Treasury. It doesn’t happen immediately. There is a lag, but it does work if combined with reducing regulations and other anti-business, Big Government policies.

“The deficit problem resides with the spending side of the equation. Although revenues increased during the Reagan years, spending increased faster and thus, deficits grew.

“I haven’t researched and can’t comment on tax cuts during the Bush 43 administration. Although it is coming at the end of the business cycle, if Trump keeps cutting regulations and reducing the size of government, particularly in his second term, the old supply-side magic just might work again. However, spending is way out of control and this is the true source of the budget deficit/debt ceiling issues.

“Please correct the record even though it runs afoul of your Rocky meme. The truth sometimes hurts. Love The 5.”

Yes, I should have been more precise in my language and said the national debt snowballed despite the promises that came with the tax cuts.

You’re right, revenue did grow through the ’80s and the early 2000s, although in both cases the economy was climbing out of recession — which is not the case now, and which might explain why revenue is falling short of expectations at the moment.

But here’s the reality of how Washington works: The whole purpose of supply-side philosophy is to give Republican politicians intellectual cover for big spending. Cut taxes to some level that “optimizes” tax revenue and voila, you don’t have to worry about reining in spending because the higher revenue takes care of all that.

But it never does. The result in the Bush 43 administration, as long as you brought it up, was Dick Cheney’s conceit that “deficits don’t matter”… a ruinously expensive war in Iraq… a giant government handout to the pharmaceutical industry (Medicare Part D)… and a national debt that more or less doubled from $5 trillion to $10 trillion.

Oh, and bank bailouts at the tail end of the whole fiasco!

P.P.S. I’ve spent a lot of time in the past week talking about what’s wrong with the media… and what you might be able to do to take your power back, at least a little.

You’ve heard the facts. You’ve seen the writing on the wall. Now all you have to do is click this link to get started.