A Hacker-Free Future (Closer Than You Think)

The government of Lake City, Florida — population a little over 12,000 — is regaining control over its phone and email systems after forking over 42 bitcoins to hackers on Tuesday.

But today’s episode of The 5 is not about bitcoin.

Instead, our main topic is the pitiful state of cybersecurity… and a near future when you and I can go about our business online without giving a second thought to hackers, phishers and other digital miscreants.

Impossible? Given the present state of affairs, we totally understand why you feel that way.

At root, here’s the problem: “The internet wasn’t designed for transactions,” says George. “It was designed for email and communication.”

Of course, enterprising people figured out how to conduct kinda-sorta secure transactions in the web’s earliest days with Secure Sockets Layer (SSL) technology… which later evolved into something called Transport Layer Security (TLS).

But those are crude workarounds — a paper-clip-and-rubber-band solution grafted onto the web’s early architecture.

Making matters worse is what we touched on yesterday — the “free” business models of Google and Facebook. Your most intimate data is stored on server farms in some remote locale in, say, the Arizona desert. If hackers obtain the data, it’s no skin off the back of those companies — because you’re not their customer, you’re their product.

The solution? It’s much closer than you think. And it’s key to a blockbuster prediction from George.

Think back 25 or 30 years: At that time, most computerized workplaces still had giant mainframe computers — a centralized “brain” in a climate-controlled room that fed “dumb” terminals at everyone’s desk.

If something went haywire with the mainframe, there was a high probability everyone in the workplace was SOL. 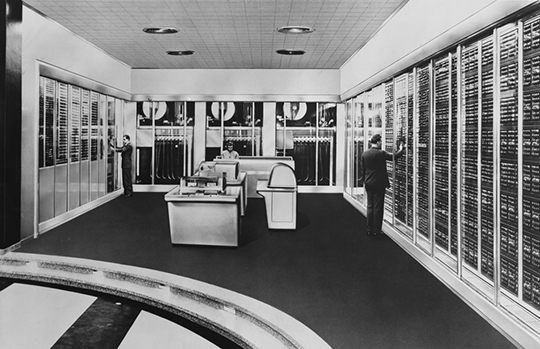 Single point of failure: If this went down, everyone went down

Your editor was keenly aware of this reality, supervising evening and weekend operations in TV newsrooms. I knew nothing about computers but I still had “sysop” privileges to reset the system so — hopefully! — I wouldn’t have to page the nerdy types who’d actually know what they were doing.

Throughout the ’90s, mainframes were steadily replaced by the server-client model… and worker bees were given a PC on their desk to go along with the monitor and cables. If something went wrong with one employee’s workstation, there was a reasonably good chance everyone else could keep humming along.

Something like that is where the solution to internet security lies. And it’s the blockchain that will make it all possible.

Yes, blockchain technology is what underpins bitcoin and many other cryptocurrencies. But it’s so much more. “Blockchain,” says Mr. Gilder, “offers a fundamentally new security architecture for the internet.

“Blockchain provides a fixed record of all transactions and information transmissions that have occurred — and distributes a compressed version of all the data to everyone in the network.

“By using a model that’s distributed instead of centralized, we won’t have all information in one place — where it’s an easy target for hackers. Instead, you’d have to attack all the records across the whole internet before you can change or steal anything.

“Any hacker who hacks into one computer can gain nothing except what’s in that particular computer. That’s because the information is distributed across the network. So a hacker would have to capture 51% of the entire network in order to defraud the network.”

Good luck with that.

The practical consequence of blockchain-based cybersecurity? It sounds almost utopian… but George says it’s for real.

“It means that you won’t have to worry about being in charge of security,” says George. “You won’t have to learn a separate username and password for all the various vendors on the internet. No sets of security questions. No remembering your mother’s maiden name. No entering the last four digits of your Social Security number.

“All those vendors on the internet have to respect your own identity. They’ve got to deal with you. They’ve got to know all the numbers. They need to master all of the private keys of all their customers. Not the other way around. Because data, including your identity, are being verified and distributed everywhere.”

What’s more, “You’ll be in charge of who can access your data,” says George. “In fact, you’ll be able to charge people for using your immediate data. No more watching ads on YouTube without receiving something in return.”

In short, “The whole system becomes more secure and more responsive to your own needs and your own security.

“In fact, the blockchain will become so fundamental to the new system that its very name will be derived from it. I call it the ‘Cryptocosm.’ It’s already in the works. It’s being developed right now, and it will have the power to create vast fortunes for early investors.”

By the time this future arrives, it might well have a different name. As we said yesterday, George envisioned the smartphone as long ago as 1990, only he called it a “teleputer.”

The point is that vast fortunes can be made starting now. Think back to Apple’s iPod, which was really the forerunner to the iPhone. If you’d bought AAPL shares when the iPod made its debut on Oct. 23, 2001… you’d have multiplied your money 12-fold by the time the iPhone made its debut on June 29, 2007.

Where are the comparable opportunities now? That’s what George will reveal during a special event next Tuesday, July 2, at 1:00 p.m. EDT. We still have some available slots for this FREE event, but they’re filling up quickly — secure your access right here and now.

The markets are treading water, awaiting trade war news from the G20 summit in Japan. 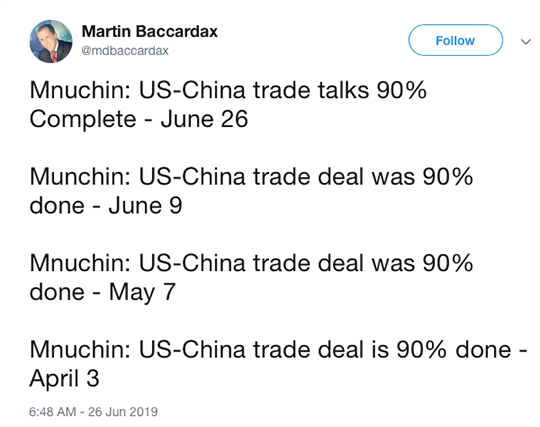 Not much progress, then, huh? (Hat tip to our colleague Greg Guenthner for spotting that.)

Our macro maven Jim Rickards says there’s every reason to expect a “deal” — but only for the sake of appearances. “Small beer really,” he says, “more of a truce in tariff escalation. No Grand Bargain — talks will continue.”

The bigger reality? Washington and Beijing have descended into a cold war. “The confrontation,” says Jim, ”will continue for decades.”

“I know the cause of the next financial crisis,” a reader writes, “and it’s a fracked-up (credit Battlestar Galactica) reason. Here is some background info for you.

“We need to relocate for family reasons but don’t want to buy a home. Our ‘retail’ credit scores are all 800-plus and we have zero debt and $200K-plus cash in liquid (bank) assets.

“No one will rent a home to us because we can’t ‘prove’ income via W-2 or tax returns, only bank statements. A minimum-wage W-2 earner can rent anything within 30% of their income, but we can’t.

“Now the irony! We are preapproved for a mortgage up to $1 million. WTF?

“I don’t want to buy a home, as we are not sure we want to stay in the new location longer than three years. No, we don’t want to be landlords either.

“Just me venting, but I would like a logical explanation for this situation. Oh, and before anyone suggests it, it is illegal in California to prepay rent a year in advance. Not that I’d do that if I could, because it’s foolish. Just pointing out it’s not even an option…”

The reader signs his letter, “Unhappy California resident in the ‘Land of Democrat Douchebags’… (I double DARE you to print that).”

The 5: Sorry, you’re not that special — it’s not new, nor is it limited to California.

More than 20 years ago your editor decided to relocate to the Chicago area without having a permanent job lined up. Freelance gigs as a TV news writer were easy to come by and I had ample savings to pay forward several months’ rent.

But landlords wanted nothing to do with me. I’m reasonably certain it was a war on drugs thing: If you can’t prove a current source of W-2 income but you have ready cash to prepay rent, you must be a drug dealer. Or something like that.

And this was pre-Sept. 11. Undoubtedly the environment is far more restrictive now with “terrorism” as the excuse for any number of limits on how you and I can conduct commerce.

In the bigger picture, however, these limits are of a piece with a system that discourages Americans from entrepreneurship and herds them into wage-slave W-2 employment. Try to break free of the hamster wheel and you’re stuck with self-employment tax and higher health insurance costs.

To say nothing of a struggle to keep a roof over your head even if you can easily afford it. Good luck.

“Thank you for making me aware of George Gilder,” writes one of our semiregulars. “Somehow I managed to make it into my 70s without ever having heard of him.”

In response to Mr. Gilder’s musings about artificial intelligence, the reader says, “For a long time I’ve thought I must be the only member of the ‘There’s no such thing as AI’ club.

“Binary math is the same math that makes the Morse code telegraph work. So basically a computer is a telegraph key that uses a really large and fast silicon-chip filing system to record its actions in place of a human being with a pencil and a telegram pad.

“There’s no way that will ever translate to artificial intelligence.”

The 5: Even those of us who did hear of Gilder back in the day wondered what happened to him — until now.

Wealth and Poverty came out within a few weeks of Ronald Reagan taking office in 1981. In time, Gilder became Reagan’s “most quoted living author.”

Gilder’s career as a tech visionary didn’t start until a few years later. But even during the ’80s, legend has it Gilder handed the Gipper a microchip and told him it would change the world. How many people can claim something like that?